Tweet
In 2021, the average working week at EU level lasted 36.4 hours. However, this varied across the EU from 32.2 hours in the Netherlands to 40.1 hours in Greece.
Tweet
Skilled agricultural, forestry and fishery workers (42.9 hours) had the longest average working weeks in the EU in 2021. 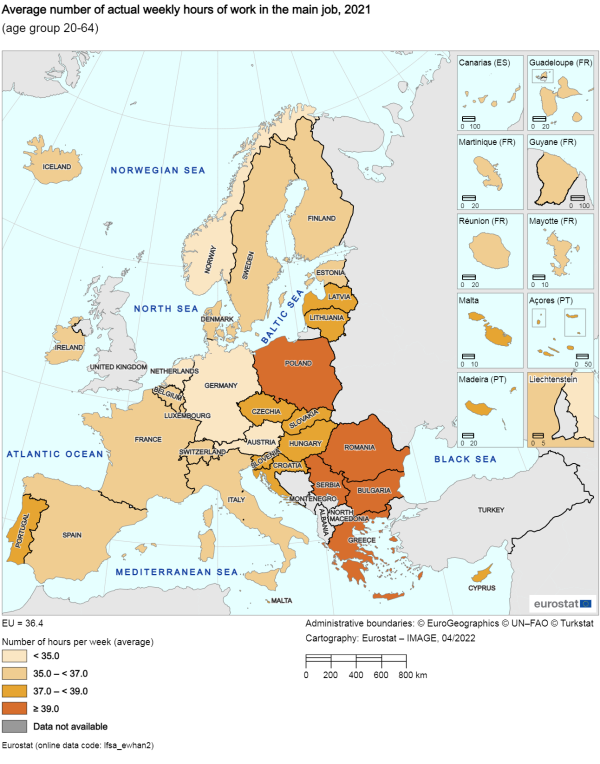 This article highlights the main aspects of working time for different population sub-groups (e.g. men and women, part-time and full-time workers) and across various economic activities and occupations. More specifically, it focuses on the average number of actual hours of work per week employed people spent on their main job in 2021.

Figures in this article come from the EU Labour Force Survey (LFS). Since 2021, due to the implementation of Regulation (EU) 2019/1700, all countries participating in the survey have harmonised their questionnaires regarding the measurement of actual working hours, which led to enhanced comparability and quality of the results.

In the EU, in 2021, people aged 20-64 in employment worked 36.4 hours on average per week. This number refers to the hours people ‘actually’ spent on work activities in their main job during the reference week (see methodological notes for the difference between actual and usual working hours).

The EU average for actual working hours per week hides many differences between EU countries (see Map 1). Those with the longest working weeks were Greece (40.1 hours), Romania (39.8 hours), Poland (39.7 hours) and Bulgaria (39.5 hours).

By contrast, the Netherlands had the shortest average working week (32.2 hours), followed by Austria (33.7 hours) and Germany (34.6 hours). The EFTA country Norway also stands out with a short working week (33.9 hours).

The average is computed as the total number of actual hours of work divided by the number of employed people having actually worked. The denominator only takes into account those people present at work (excluding people absent due to holidays, sickness, temporary lay-off, etc.). If people absent from work were also to be taken into account, the denominator would be higher while the numerator would remain the same, leading to a considerably lower average when there are many people absent from work. This is particularly true for 2020, when the COVID-19 pandemic hit the labour market.

Countries with a high share of part-time workers report a shorter average working week for the total number of people employed. Figure 1 shows a strong negative correlation between these two indicators. 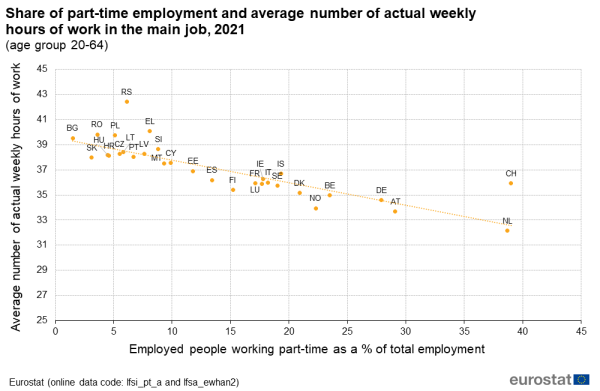 Figure 1: Share of part-time employment and average number of actual weekly hours of work in the main job, 2021
Source: Eurostat (lfsi_pt_a) and (lfsa_ewhan2)

Employed people by length of the average working week 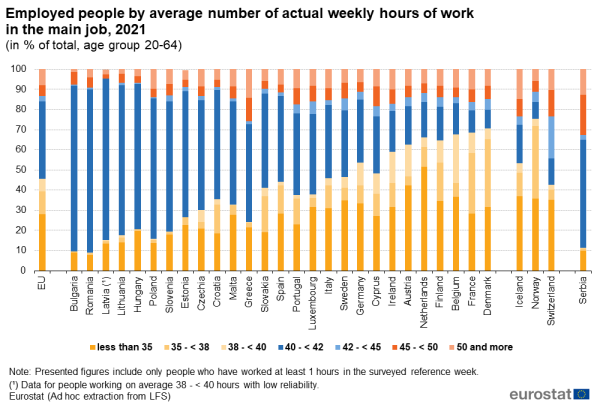 The largest share in most EU Member States (18 countries) was for people with an average working week of 40 to less than 42 hours. This share exceeded 50 % in 11 EU countries and reached more than 70 % in Bulgaria, Romania, Latvia, Lithuania and Hungary.

Figure 3A and 3B: Average number of actual weekly hours of work in the main job by sex and full-time part-time, 2021
Source: Eurostat (lfsa_ewhan2)

The gender pattern is not the same for part-time workers: women had longer working weeks in some countries while it was the opposite in others. Denmark stood out with the largest difference in the length of the average working week between male and female part-time workers (18.4 versus 22.0 hours, respectively).

How does the average working week vary across economic activities and occupations?

The length of the average working week measured in actual hours of work varies across different sectors as regards economic activities (NACE Rev. 2) (see Figure 4). In 2021, people employed in the ‘agriculture, forestry and fishing’ sector spent the largest number of hours at work – 41.8 hours on average per week. They were followed by those working in the sectors ‘mining and quarrying’ (39.6 hours), ‘construction’ (39.2 hours) and ‘transportation and storage’ (38.5 hours). In contrast, workers in ‘arts, entertainment and recreation’ (33.0 hours), ‘education’ (32.2 hours) and ‘activities of households as employers’ (26.0 hours) had the shortest average working weeks. 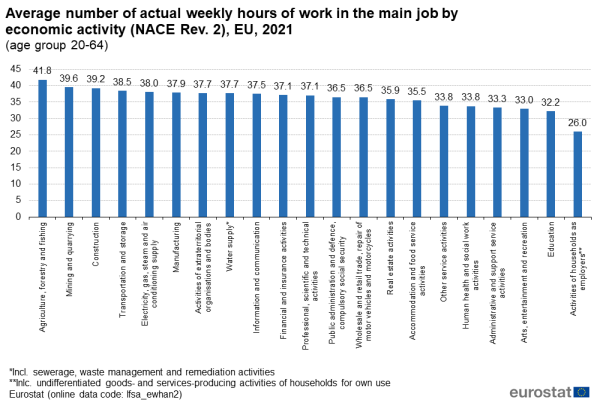 When looking at different groups of occupations (ISCO-08), skilled agricultural, forestry and fishery workers (42.9 hours) and managers (41.6 hours) had the longest average working weeks in the EU in 2021 (see Figure 5). By contrast, clerical support workers (34.1 hours) and workers with elementary occupations (31.6 hours) had the shortest working weeks. 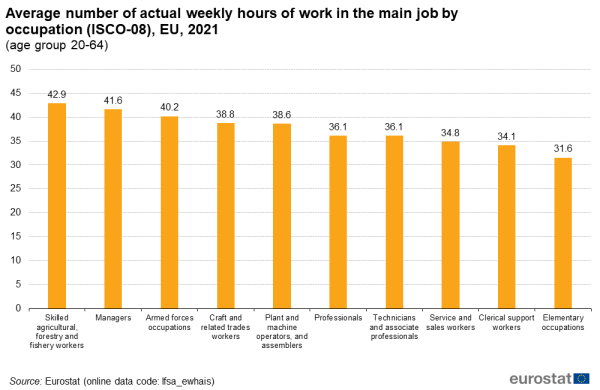 What are the differences between the average working week for employees and that for the self-employed? 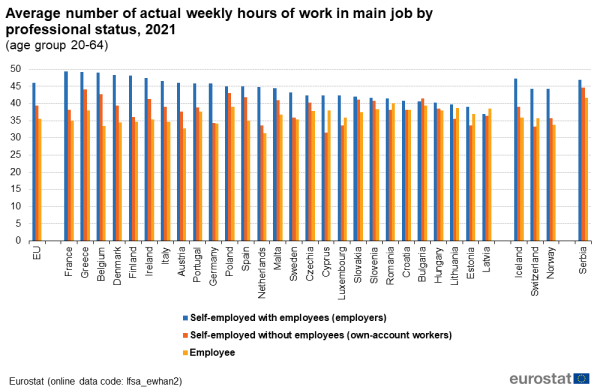 Source: The European Union Labour Force Survey (EU-LFS) is the largest European household sample survey providing quarterly and annual results on labour participation of people aged 15 and over as well as on persons outside the labour force. It covers residents in private households. Conscripts in military or community service are not included in the results. The EU-LFS is based on the same target populations and uses the same definitions in all countries, which means that the results are comparable between the countries. The EU-LFS is an important source of information about the situation and trends in the national and EU labour markets. Each quarter around 1.8 million interviews are conducted throughout the participating countries to obtain statistical information for some 100 variables. Due to the diversity of information and the large sample size, the EU-LFS is also an important source for other European statistics like Education statistics or Regional statistics.

Reference period: Yearly results are obtained as averages of the four quarters in the year. Most of the information collected during the survey relates to the respondent's situation during a reference week (being generally the week, from Monday to Sunday, preceding the interview).

Coverage: The results from the EU-LFS currently cover all European Union Member States, the EFTA Member States Iceland, Norway and Switzerland, as well as the candidate countries Montenegro, North Macedonia, Serbia and Turkey. For Cyprus, the survey covers only the areas of Cyprus controlled by the Government of the Republic of Cyprus.

Employment covers persons living in private households, who during the reference week performed work, even for just one hour, for pay, profit or family gain, or were not at work but had a job or business from which they were temporarily absent, for example because of illness, holidays, industrial dispute or education and training.

Main concepts: Some main employment and working time characteristics, as defined by the EU-LFS, include:

Statistics on the hours of work adds a new dimension to employment. The “average number of actual weekly hours of work in the main job” is an indicator providing a perspective to the social conditions of the labour.