This article analyses data on employment in high-technology (high-tech) sectors in the European Union (EU) and in some EFTA and candidate countries.

In the global race for competitiveness, it is essential to create, exploit and commercialise new technologies. High-tech sectors and enterprises are key drivers of economic growth and productivity, and generally provide high value-added and well-paid employment. 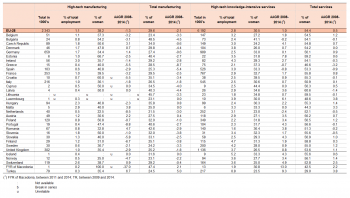 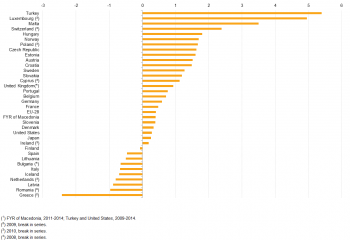 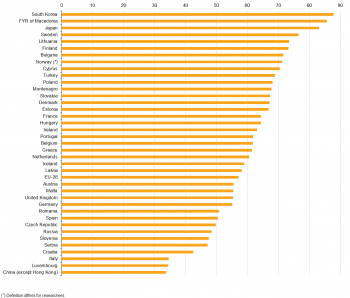 Figure 2: Researchers as a percentage of R&D personnel in business enterprise sectors in 2013, in %
Source: Eurostat (htec_sti_pers2)

Figure 3: Researchers as a proportion of total R&D personnel in high-tech manufacturing, in full-time equivalent, in 2013, in %
Source: Eurostat (htec_sti_pers2)

As a proportion of total employment, employment in high-tech manufacturing and services varied considerably from one country to another in 2014. In high-tech manufacturing, it ranged from 0.2 % in the Former Yugoslav Republic of Macedonia to 2.9 % in Malta and 3.0 % in Ireland. Differences in terms of the relative importance of high-tech knowledge-intensive services in total employment were also observed across countries. The biggest proportion (over 5 %) was recorded in Iceland and the smallest (under 2 %) in the former Yugoslav Republic of Macedonia, Lithuania, Romania and Turkey (Table 1).

At EU-28 level, the average annual growth rate (AAGR) for employment in high-tech sectors was negative over the 2008-2014 period. Compared with the manufacturing sector (where the decrease was 2.1 % a year), the high-tech manufacturing sector recorded a slower fall of 1.3 % a year on average. This decrease can be partially explained by the economic crisis that hit Europe in 2010, the impact of which was also observed in the services sector, which recorded only slight growth of 0.5 % a year. At the same time, high-tech knowledge-intensive services showed some resilience to the crisis and recorded an average annual rise of 1.0 % in the number of jobs. Some important differences emerge when comparing employment changes in countries with significant growth on the one hand and equally significant declines on the other. Of 33 countries observed, 20 registered a fall in employment in high-tech manufacturing in 2008-2014, with the biggest fall (-37.0 %) in the Former Yugoslav Republic of Macedonia, followed by a fall of 8.8 % in Portugal. Growth in high-tech manufacturing was observed in Turkey (+6.7 %, in 2009-2014), Romania (+4.7 %), Malta (+3.8 %), the Czech Republic (+3.1 %), Austria (+2.2 %), Germany (+1.4 %), Switzerland (+0.9 %) and Denmark (+0.7 %). The loss in high-tech knowledge-intensive services was much more moderate, with only four countries registering a decline: the Netherlands (-2.4 %), Spain (-0.8 %), Greece (-0.7 %) and Bulgaria (-0.2 %). The best-performing countries in terms of employment growth in high-tech knowledge-intensive services were the Former Yugoslav Republic of Macedonia (+13.0 %), Turkey (+9.3 %), Estonia (+7.8 %) and Luxembourg (+6.1 %).

Overall, roughly around one out of three employees in the high-tech sectors was a woman. However, the share of women was different in manufacturing and services (data for EU-28, 2014):

In 2014, almost 77 million people were employed in knowledge-intensive activities (KIA) in the EU-28, which represented 35.9 % of total employment. Luxembourg recorded the highest proportion (60.4 %). At the other end of the scale, the figure was below 30 % in Poland, Bulgaria and the Former Yugoslav Republic of Macedonia and below 20 % in Turkey and Romania.

In terms of employment growth, Turkey and Luxembourg saw annual increases of over 4 % between 2008 and 2014 (2009 for Turkey). The biggest decrease (-2.4 % per year) was registered by Greece during this period (Figure 1).

In the EU-28 in 2014, women accounted for 56 % of employment in KIA, as compared with 44 % in total employment (all sectors): women outnumbered men in all countries except Luxembourg, Malta and Turkey. For the knowledge-intensive activities in business industries (KIABI), the trend was not the same: only Bulgaria, Estonia, Croatia, Cyprus, Latvia, Lithuania and Poland registered a majority of women.

In 2013, nearly 1.5 million people (in full-time equivalents – FTEs), worked in business enterprise sectors of R&D in the EU-28. Of these, nearly 831 000, i.e. 57.1 % of R&D personnel in the BES, were researchers. Of the EU Member States, Sweden, Lithuania and Finland recorded the highest proportion of researchers (around three in four BES R&D employees). Across all countries covered and all economic activities, the proportion of researchers as a percentage of R&D personnel ranged from under 34 % in China to 88 % in South Korea (Figure 2).

In high-tech manufacturing, the proportion of researchers among R&D personnel varied in the countries for which data were available (Figure 3). The lowest levels were registered in Slovenia (39.6 %) and Romania (under 50 %). Among the top-ranking countries, Finland recorded a remarkable 80+ %.

In the same reference year, 20 out of 28 EU countries reported higher proportions of researchers employed in high-tech manufacturing industry than in all economic sectors considered together. Italy noted the most significant difference (17+%).

At EU-28 level, high-tech sectors accounted for 3.9 % of total employment in 2014, with two thirds occupied in high-tech knowledge-intensive services and one third in high-tech manufacturing.

At national level, 16 of 33 observed countries registered values above the EU-28 average, with rates of over 5.0 % in Slovenia, Denmark, Iceland, Finland, Malta, Switzerland and Ireland. The lowest national figures (high-tech sectors accounting for less than 2.5 % of total employment) were registered in Romania, Lithuania, the Former Yugoslav Republic of Macedonia and Turkey.

At regional level, high employment in high-tech sectors is often observed in capital regions or regions close to capitals. The Berkshire, Buckinghamshire and Oxfordshire region of the UK, which is close to London, stands out, with 11.0 % of its labour force in high-tech sectors. Other examples are Hovedstaden (~Greater Copenhagen, DK) with 9.5 %, Prague (CZ) with 9.5 % and the Comunidad de Madrid (ES) with 8.2 %. In contrast, the lowest proportions (under 1 %) were registered in Aydin, Denizli, Mugla (TR) and Anatoliki Makedonia, Thraki (EL). Denmark, Norway, Hungary, Spain, the Czech Republic and the UK show the greatest regional variation (ratio of highest to lowest proportion). The least is observed in Turkey, Croatia and Slovenia.

Statistics on high-tech industry and knowledge-intensive services (‘high-tech statistics’) comprise economic, employment, and science, technology and innovation (STI) data on manufacturing and service industries or products traded broken down by technological intensity. The domain uses various other domains and sources of official Eurostat statistics (CIS, COMEXT, LFS, SBS, PATSTAT and R&D), on which its coverage is therefore dependent.

Data on high-tech employment come from the EU Labour Force Survey (LFS). Employed people are defined as persons aged between 15 and 74 who performed work during the reference week, even for just one hour, for pay, profit or family gain, or had a job or business from which they were temporarily absent, e.g. because of illness, holidays, industrial dispute or education and training.

The KIA employment indicator was developed to offer a harmonised means across all sectors of comparing economies with respect to knowledge intensity. An activity is classified as knowledge-intensive if employment of persons with a tertiary education represents more than a third (33 %) of the total employment in that activity.

Statistics on R&D personnel are compiled using guidelines in the OECD’s 2002 Frascati Manual. R&D personnel include all persons employed directly in R&D and persons supplying direct services (such as managers, administrative staff and clerical staff). For statistical purposes, indicators on R&D personnel are compiled as both head counts (HC) and full-time equivalents (FTEs). A sub-category of R&D personnel, the researchers, are professionals engaged in the conception or creation of new knowledge, products, processes, methods and systems, and in the management of related projects.

In the context of economic globalisation, technology is a key factor in enhancing growth and competitiveness in business. High-tech industries are expanding most strongly in international trade and their dynamism helps to improve performance in other sectors.

Investment in research, development, innovation and skills constitutes a key policy area for the EU as it is essential to economic growth and to the development of a knowledge-based economy.

Research, development, science and technology have been acknowledged as factors of growing competitiveness, better and better-paid jobs, greater social cohesion and a smart, sustainable and inclusive economy. There is a need to measure progress and achievements in relation to the goals identified first in the Lisbon strategy and redefined in the Europe 2020 strategy.

In 2004, the Commission adopted Regulation (EC) No 753/2004, which complements Decision No 1608/2003/EC by setting out a framework for the standards, definitions and classifications used in the production of science and technology statistics.

In the light of developments affecting science and technology statistics and of demand for new and more detailed and frequent statistics, new implementing measures were laid down in 2012, in Regulation (EU) No 995/2012.

Launched in 2010, the Europe 2020 strategy sets out a vision of Europe’s social market economy for the 21st century, underpinned by three mutually reinforcing priorities:

The European Commission is further boosting the Europe 2020 strategy with seven flagship initiatives, one of which, the Innovation Union in support of ‘smart growth’, is aimed at improving the framework for research and innovation in the EU. Over 30 action points have been published. For example, the Innovation Union prioritises a gender balance in research careers in the European Research Area. It recommends that Member States take gender and dual-career considerations fully into account in their national R&D strategies.

Regional policy contributing to smart growth in Europe 2020, a Commission Communication published in 2010, shows how, by targeting investment in innovation in all regions, EU regional funding is crucial to achieving growth. A key element is encouraging national and regional governments to design ‘smart specialisation strategies’ to help regions identify their best assets. Concentrating resources on a limited number of priorities will ensure a more effective use of public funds and help to raise levels of private investment.

On 13 September 2013, following a request from the European Council, the Commission adopted its Communication Measuring innovation output: towards a new indicator. The indicator in question measures the extent to which ideas from innovative sectors are able to reach the market, thus providing better jobs and making Europe more competitive. Making use of several of Eurostat’s science, technology and innovation (STI) statistics and concepts, it supports the benchmarking of national innovation policies and shows up significant differences between EU countries.

The Europe 2020 strategy includes trade-opening initiatives for ̒sectors of the future̕, including high-tech products and services.