Ireland recorded the highest number of midwives per inhabitant among the EU Member States (211 per 100 000 inhabitants; licensed to practise); the next highest ratios were recorded in Sweden and Belgium.

In 2020, Belgium recorded the highest number of midwifery graduates relative to population among the EU Member States, 5.6 per 100 000 inhabitants.

For nurses and midwives, Eurostat collects data for three concepts, with the first two of these also used for caring personnel:

In this article, preference is given to the concept of ‘practising’ health care professionals, which is also used for the European Core Health Indicators (ECHI) on i) practising nursing and caring professionals and ii) practising qualified nurses and midwives. For some EU Member States, data are not available for this concept and data are therefore presented for one of the alternative concepts instead: footnotes indicate these exceptions in each table and figure.

Based on a sum of the available data (see Table 1 for more information concerning the data coverage for individual EU Member States), in 2020 there were: 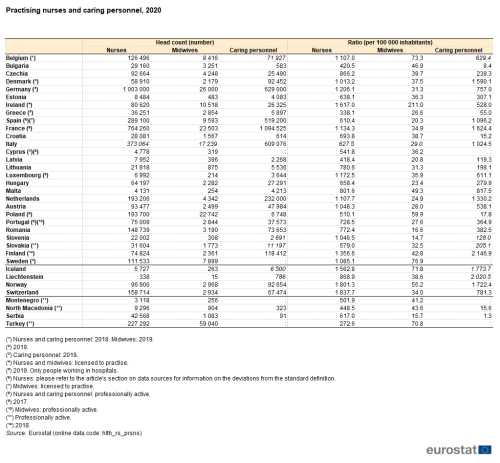 The number of nurses may vary between EU Member States according to differences in healthcare systems and how nurses are classified. Equally, the number of nurses compared with other personnel (such as physicians) also varies between different providers of healthcare, for example between hospitals and long-term nursing care facilities.

In 2020, Germany had the highest number of practising nurses among EU Member States, at just over one million; this was considerably higher than the second highest count recorded in France (764 000 professionally active nurses). In turn, the number of nurses in France was twice that recorded in Italy (373 000), while Spain (289 000; including midwives) was the only other Member State to report more than 200 000 nurses.

Elsewhere, the number of practising nurses was generally within the range of 500 to 900 per 100 000 inhabitants in 2020. Bulgaria (421), Latvia (418) and Greece (338; only people working in hospitals; 2019 data) recorded lower ratios. A comparison of the latest data for Ireland and Greece shows that there were 4.8 times as many nurses per 100 000 inhabitants in the former. Expressed in a different way, each nurse licensed to practise in Ireland covered an average of 62 inhabitants, while in Greece the same ratio indicated that each nurse working in a hospital covered an average of 296 inhabitants (2019 data). 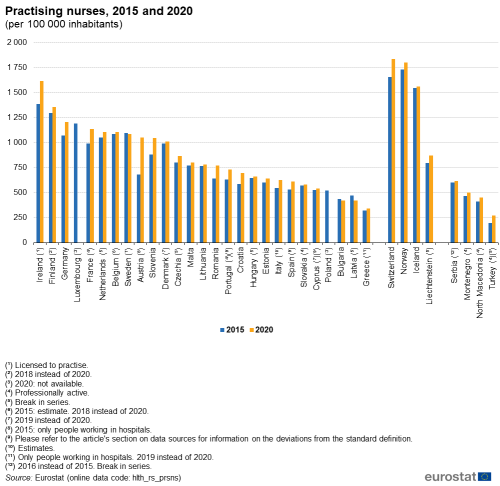 As with nurses, practising midwives (ISCO 08 codes 2222 and 3222) plan, manage, provide and evaluate care services. Midwives do so before, during and after pregnancy and childbirth, providing delivery care for reducing health risks to women and new-born children; they may work autonomously or in teams with other healthcare providers.

The distribution of midwives across the EU Member States was somewhat different to that for nurses: the highest number of practising midwives in 2020 was again recorded in Germany (26 000) followed by France (23 500), but these were then followed by Poland (22 700; 2017 data).

Among the EU Member States, Ireland had by far the highest ratio of midwives relative to its population size, 211 per 100 000 inhabitants in 2020 (note that this figure is based on midwives who are licensed to practice and includes nurses that also have midwifery qualifications) –see Figure 2 for more information concerning the data coverage for individual EU Member States. Sweden (2019 data), Belgium (2019 data) and Poland (2017 data) were the only other Member States to record ratios of more than 50 practising midwives per 100 000 inhabitants. 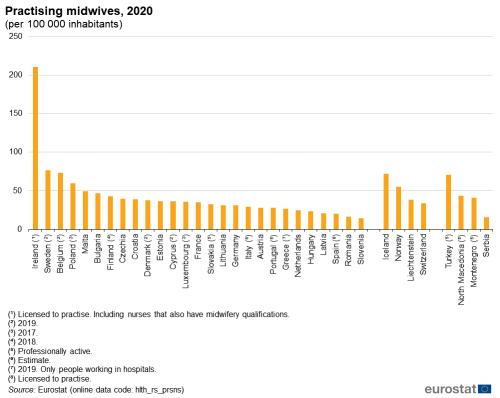 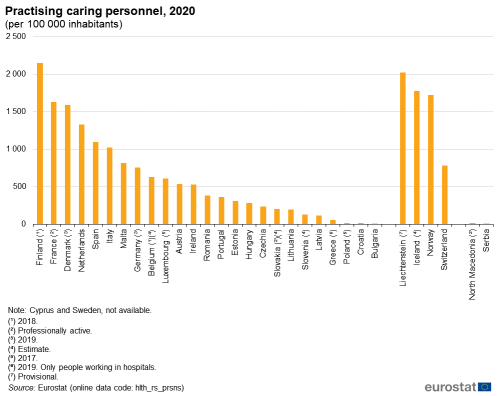 Table 2 focuses on nursing professionals, midwives and health care assistants employed in hospitals. This coverage of healthcare personnel differs from Table 1 in that it does not include associate professional nurses (only nursing professionals) nor, by definition, are there are any home-based personal care workers.

Among the EU Member States, Germany recorded the highest absolute number of nursing professionals and midwives employed in hospitals (534 000), while France (386 000; 2019 data) and Italy (274 000) were the only other Member States (for which recent data are available) to record more than 200 000 nursing professionals and midwives in 2020. A similar analysis for health care assistants working in hospitals reveals the highest counts were in France (245 000; 2019 data) and Spain (141 000); none of the other Member States (for which there are recent data; note that there are no data available for Italy, among others) recorded more than 70 000 health care assistants working in hospitals. 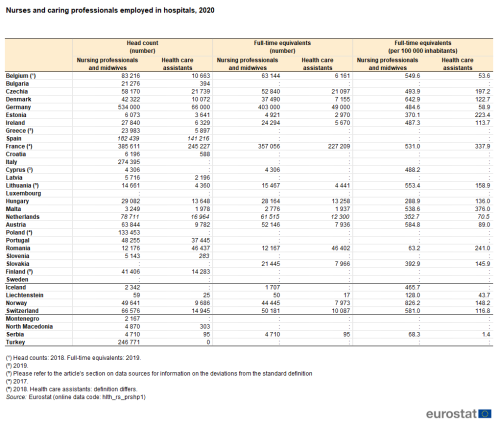 The availability of data converted into full-time equivalent (FTE) units indicates that employment in hospitals was generally close to full-time. For nursing professionals and midwives, the number in full-time equivalents was equal to at least 80 % of head counts for 11 of the 14 EU Member States for which data are available. Falling below this range were the Netherlands (78.2 %), Belgium (78.1 %; 2018 data) and Germany (75.5 %). For health care assistants, both of these measures are available for 13 Member States, nine of which recorded ratios between full-time equivalents and head counts of at least 80 %. By contrast, in Germany (74.2 %), the Netherlands (72.5 %), Denmark (71.0 %) and Belgium (58.7 %; 2018 data), a smaller proportion of health care assistants employed in hospitals appeared to work on a full-time basis.

Table 3 focuses on graduates for the two most qualified occupations covered by this article, namely nursing professionals and midwives. 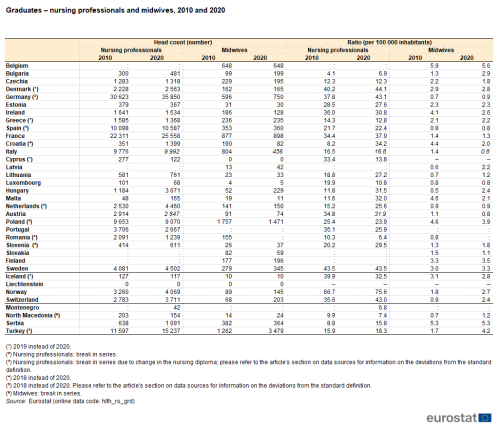 Between 2010 and 2020, there was an increase in the number of nursing professionals graduating in a majority of the EU Member States (see Table 3 for more information concerning the data coverage). Several of these recorded very high growth rates as the number of graduates was more than 2.5 times as high in 2020 (compared with 2010) in Croatia (2010–2018), Malta and Hungary. By contrast, the number of nursing professional graduates declined in nine Member States, falling by almost one third in Luxembourg, approximately two fifths in Romania (note that there is a break in series) and by more than half in Cyprus (2010–2019).

A similar analysis for midwifery graduates shows a comparable picture, as between 2010 and 2020 there were 13 EU Member States which recorded an increase in their number of graduates, while there were 10 which recorded decrease and two – Belgium and Cyprus – where there was no change (note that in Cyprus this was because it had no graduates in either year); no data or incomplete data for Portugal and Romania. By far the highest increases (in relative terms) were recorded in Hungary (where it was 4.4 times as high in 2020 compared with 2010), Latvia (where it more than trebled) and Bulgaria (where the number doubled). At the other end of the range, the biggest decreases in midwifery graduates between 2010 and 2020 were recorded in Malta (down 42 %), Italy (down 43 %) and Croatia (down 57 %; 2010–2018). 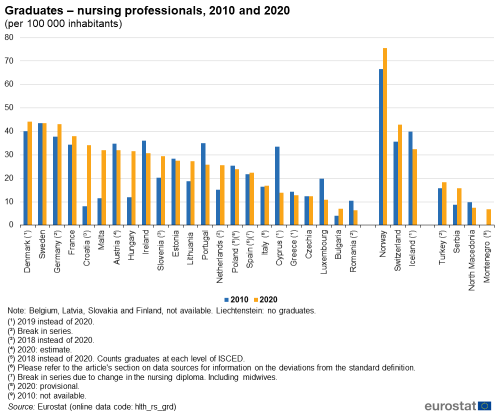 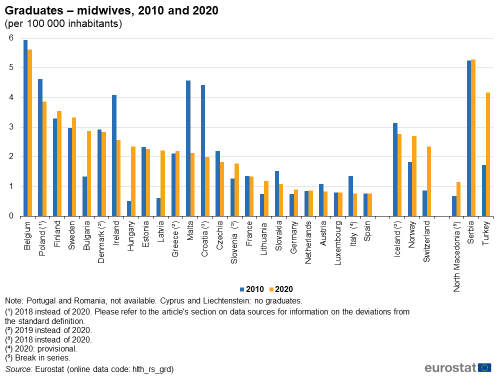 Employment data cover the number of health care staff (head counts) and the number of full-time equivalent (FTE) persons directly employed in hospitals (both general and specialised hospitals); the self-employed working in hospitals are also included, for example, those working with service contracts as health professionals.

Data on graduates for any given year cover the number of students who have graduated in either nursing or midwifery, so they may become a professional or associate professional nurse or midwife; the data for associate professional nurses are not shown in this article. The data exclude those who have graduated in other fields of studies which do not provide a recognised foundation for the practice of nursing or midwifery. Within the EU, Directive 2005/36/EC of the European Parliament and of the Council defines the training of nurses responsible for general care as comprising at least three years of study or 4 600 hours of theoretical and clinical training.

Common definitions have been agreed between Eurostat, the OECD and the World Health Organization (WHO) with respect to the employment of various health care professionals. Three main concepts are used to present these data; Eurostat gives preference to the concept of ‘practising’ nurses, midwives and caring personnel:

Data on nurses, midwives and caring personnel are classified according to the International Standard Classification of Occupations (ISCO); they are defined under ISCO 08 as codes 222, 322 and 532:

For country specific notes, please refer to these background information documents which are annexes to the metadata on health care resources:

In particular, note that:

According to the European Commission’s Directorate-General for Health and Food Safety, there are growing concerns about a shortage of nursing and caring professionals in the EU and these may become exacerbated as the population continues to age and a relatively high proportion of nurses and caring professionals move from employment into retirement.

One consequence of future demographic developments is that the number of elderly persons (aged 65 years or more) in the EU is forecast to increase by 37 % between 2022 and 2050 (Eurostat baseline projections 2019); during this period the share of the elderly in the total population is projected to increase from 21.2 % in 2022 to 29.5 % by 2050. This ageing of the EU’s population is likely to result in considerable demands for a range of services, as an increasing proportion of the population becomes frail and suffers from declining physical and mental health. European healthcare systems will therefore need to anticipate future skills requirements for health professionals – in particular, nurses and caring professionals – so these may be matched against the demands of an increasingly aged society, for example, a likely shift away from care in hospitals towards care in the home.

On 7 September 2022, the European Commission proposed a European care strategy. The Commission is proposing concrete actions to support Member States in improving working conditions and work-life balance for carers and to ensure quality, affordable and accessible care services across the European Union.