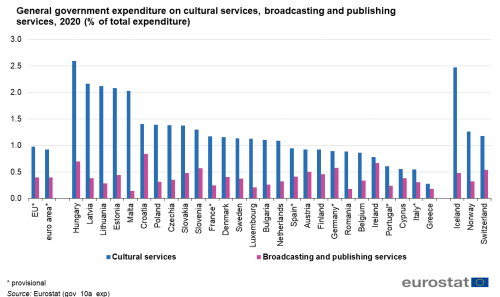 The main functions of general government units include organising and redirecting flows of money, goods and services or other assets among corporations, among households, and between corporations and households (examples include the redistribution of national income and wealth), or the production of goods and services to satisfy households’ needs (for example, the provision of state health care or culture to the whole community).

This percentage remained relatively stable over time within the EU, although there were considerable differences when analysing the results for individual countries (see Figure 1).

Highest share of expenditure on cultural services in Hungary

Highest share of expenditure on broadcasting and publishing services in Croatia

In 2020, the highest shares of expenditure on broadcasting and publishing services were recorded in Croatia (0.8 %), Ireland and Hungary (both 0.7 %) as well as Germany and Slovenia (both 0.6 %). The lowest shares were observed in Malta (0.1 %).

General government expenditure on cultural services as a share of GDP stood at 0.5 % in 2020, unchanged from 2019. The ratio remained stable in the majority of the Member States, increased slightly in eight Member States and declined in two Member States. 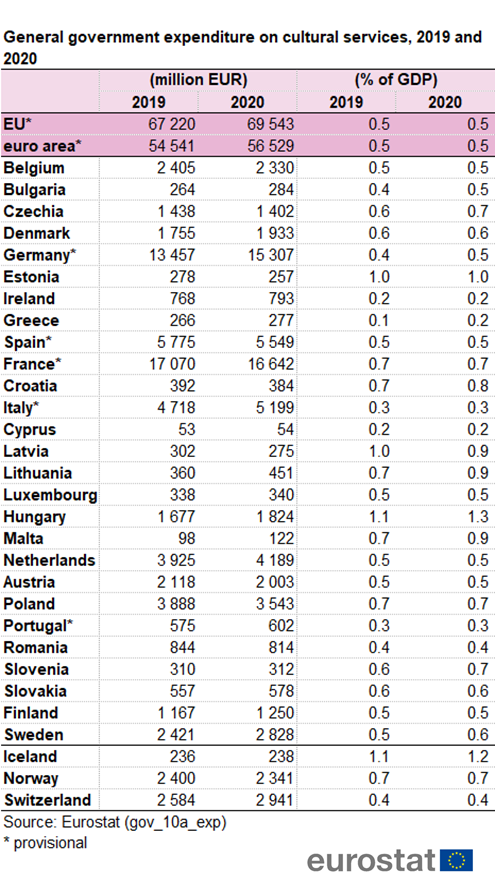 General government expenditure on broadcasting and publishing services as a share of GDP stood at 0.2 % in 2020, unchanged from 2019. The ratio increased in only one Member State (Bulgaria), while remained unchanged for all other Member States. 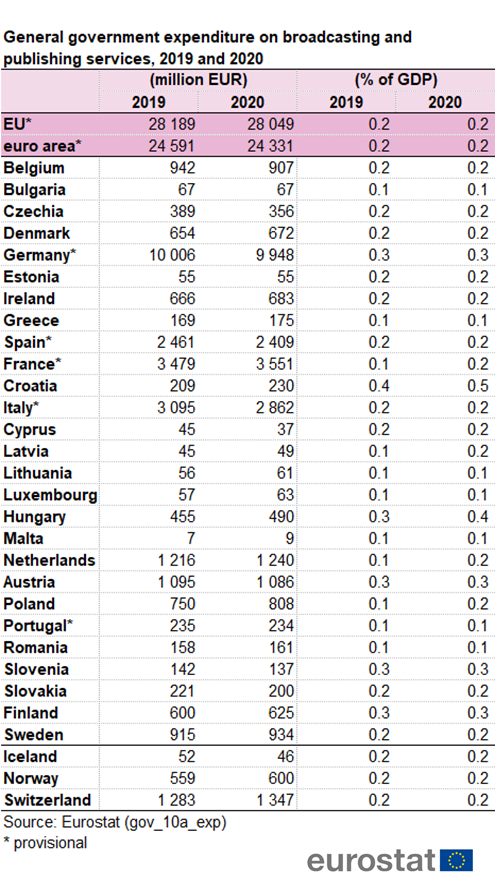 Government finance statistics are collected by Eurostat on the basis of the European System of Accounts (ESA 2010) transmission programme. EU Member States are requested to transmit, among other tables, table 1100 on the ‘Expenditure of general government by function’ 12 months after the end of the reference period. Table 1100 provides information about expenditure of the general government sector divided into COFOG divisions and groups as well as ESA 2010 categories.

Classification of government expenditure by function

COFOG Division 08 for recreation, culture and religion consists of the following COFOG groups:

Among these six groups, cultural services and broadcasting and publishing services are those which account for a majority of culture-related government expenditure in the EU. Culture-related items cannot be distinguished in data for Groups 08.5 and 08.6.

Broadcasting and publishing services covered by COFOG Group 08.3 include:

Further information is available in Eurostat’s manual on sources and methods for the compilation of COFOG statistics — 2019 edition.

The production of reliable, comparable and up-to-date cultural statistics, which provide a basis for sound cultural policymaking, is a cross-sectorial priority in the latest work plan. Eurostat collates culture statistics from several different data collections to provide policymakers and other users with information on the main developments in the field of culture, covering issues such as education, employment, business, international trade, participation and consumption patterns.