Volume indices of GDP per capita, 2020

This article presents the most recent analysis of purchasing power parities and related economic indicators (gross domestic product (GDP) per capita, level of actual individual consumption (AIC) per capita, countries' price level indices) in the European Union (EU) and the countries mentioned below for the years 2018, 2019 and 2020, focusing primarily on the latest reference year. The countries included in the comparison are the 27 EU Member States, three EFTA countries (Iceland, Norway and Switzerland), United Kingdom, five EU candidate countries (Albania, Montenegro, North Macedonia, Serbia and Turkey) and one potential candidate country (Bosnia and Herzegovina). 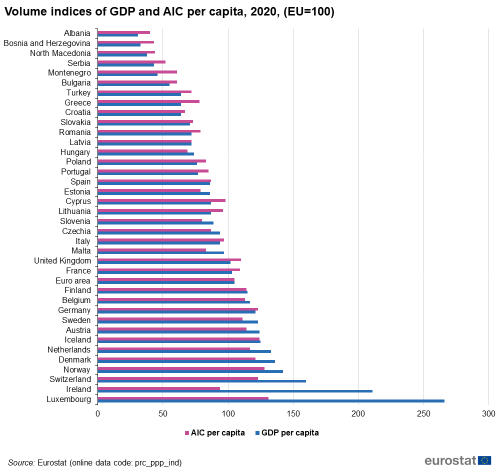 Countries’ volume indices of GDP per capita are shown in the left-hand part of Table 1. The dispersion in GDP per capita across the EU Member States is quite remarkable. Luxembourg has by far the highest GDP per capita among all the 37 countries included in this comparison, being more than two and a half times above the EU average. This is partly explained by the fact that a large number of foreign residents are employed in the country and thus contribute to its GDP, while they are not included in the resident population. 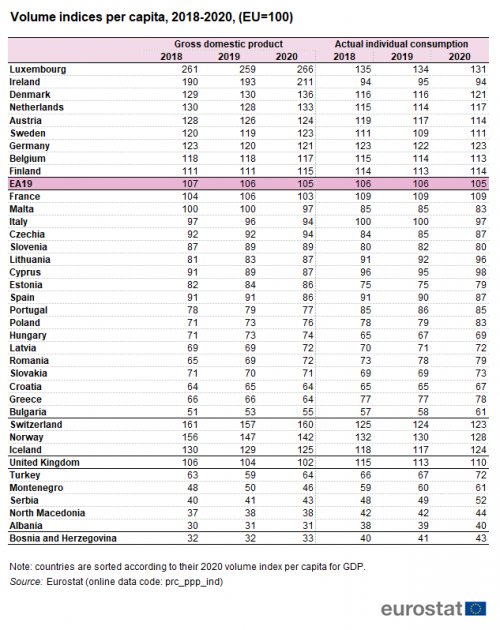 Luxembourg has the highest level of AIC per capita among all 37 countries included in this comparison at 31% above the EU average. It is followed by the EFTA countries Norway, Iceland, Switzerland and EU Member States Germany and Denmark, with AIC per capita at 28%, 24%, 23%, 23% and 21% above the EU average, respectively. While Luxembourg can be said to belong to "a division of its own" in terms of GDP, this is less so for AIC. One reason for this is that cross-border workers contribute to GDP in Luxembourg while their consumption expenditure is recorded in the national accounts of the country of their residence. Ireland, having the second highest level of GDP per capita in the EU, has an AIC per capita at 6% below the EU average. 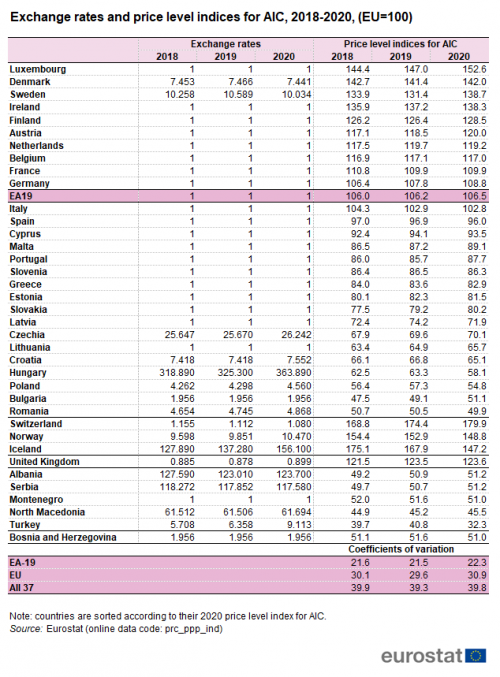 Exchange rates are crucial in determining price levels, and exchange rate movements consequently often have a big impact on the development of price levels over time. In fact, several of the major price level changes observed between 2018 and 2020 can be at least partly explained by fluctuations of a country's currency against the Euro. In 2019 and 2020, the national currency of Turkey showed a large depreciation against the Euro; the same country shows the largest decrease of price levels between 2018 and 2020.

The last three rows in Table 2 show the coefficients of variation of the price levels for three groups of countries: the euro area (EA-19), the EU Member States (EU) and the entire group of 37 countries. A time series of these coefficients can be interpreted as a rudimentary price convergence indicator.

These figures show that, firstly, and unsurprisingly, the price dispersion is much less pronounced in the euro area than in the EU as a whole and in the 37-country group, which can be partially impacted by the volatility of exchange rates. Secondly, over this three-year period, price levels are very slightly converging within EA-19, EU and for all 37 countries.

Purchasing power parities (PPPs) are currency conversion rates that are applied in order to convert economic indicators from national currency to an artificial common currency, called the Purchasing Power Standard (PPS), which equalizes the purchasing power of different national currencies and enables meaningful volume comparisons between countries. For example, if the GDP or AIC per capita expressed in the national currency of each country participating in the comparison is divided by its PPP, the resulting figures neutralise the effect of differences in price levels and thus indicate the real volume of GDP or AIC at a common price level. When divided by the nominal exchange rate of a given year, the PPP provides an estimate of the price level of a given country relative to, for instance, the EU total.

In their simplest form PPPs are nothing more than price relatives that show the ratio of the prices in national currencies for the same good or service in different countries. For example, if the price of a hamburger in France is 2.84 euro and in the United Kingdom it is 2.20 pound sterling, the PPP for hamburgers between France and the United Kingdom is 2.84 euro to 2.20 pounds or 1.29 euro to the pound. In other words, for every pound spent on hamburgers in the United Kingdom, 1.29 euro would have to be spent in France in order to obtain the same quantity and quality – or volume – of hamburgers.

The indices of relative volumes of GDP and AIC per capita published in this article have been adjusted for price level differences, and are expressed in relation to the European Union average (EU=100). Thus, for instance, if a country's volume index is below 100, that country's level of GDP (or AIC) per capita is lower than for the EU as a whole. The price level adjustment factors, referred to as purchasing power parities, can also be used in comparison of countries' price levels.

The COVID-19 pandemic has affected the price collection for purchasing power parities (PPPs) during 2020 and the estimation of 2020 expenditures used in the calculation of the first estimates of 2020 PPPs. More information is available here.