EU exports fell less than imports and consequently the trade balance increased from EUR 192 billion in 2019 to EUR 217 billion in 2020.

The main destination for EU exports in 2020 were other European countries accounting for 37 % of the total, followed by Asia (30 %) and North America (20 %).

International trade - especially the size and evolution of imports and exports - is an important indicator of the performance of the European Union (EU) economy, showing how it interacts with other countries and its position.

This article takes a close look at recent trends in imports and exports, focusing on extra-EU trade, the main trading partners, and the most traded products. 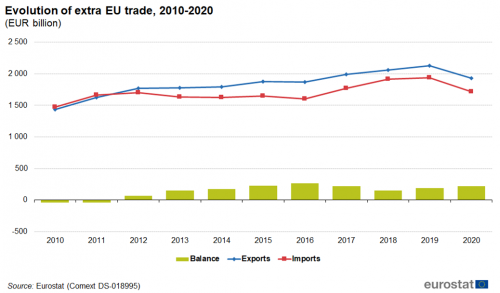 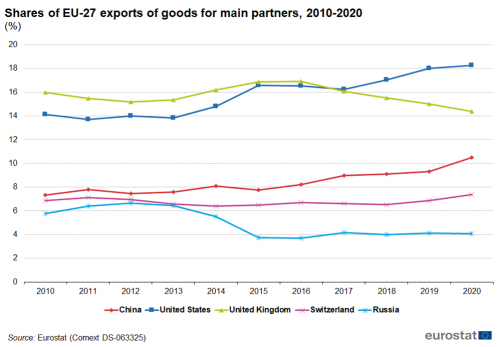 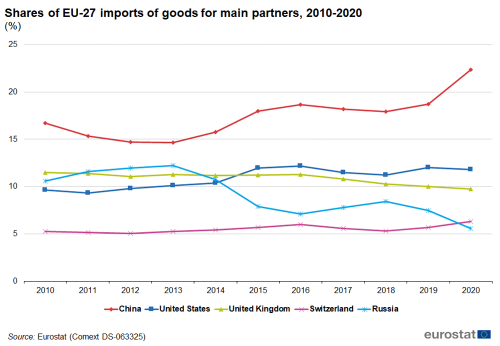 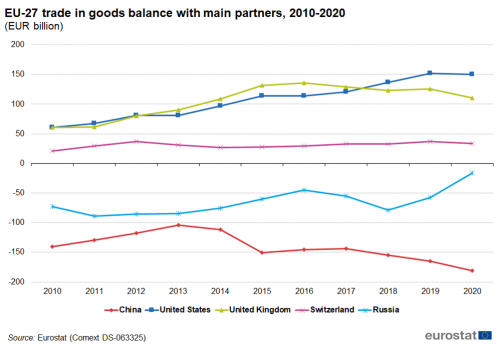 Figures 6 and 7 show exports and imports by product group. The primary products (food and drink, raw materials and energy) are shown in red colours while the manufactured products (chemicals, machinery and vehicles and other manufactured goods) are shown in blue colours. 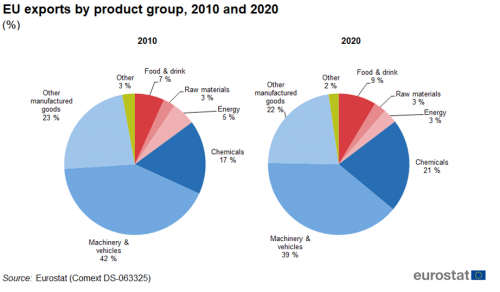 The majority of EU imports are also manufactured goods (see Figure 7). Their share in total EU imports increased from 63 % in 2010 to 74 % in 2020. The breakdown diverges from exports: machinery and vehicles (34 %) and chemical products (14 %) have smaller shares while the share of other manufactured goods (26 %) is slightly higher than in exports. The share of energy in imports has significantly decreased in recent years. In 2010 it accounted for 25 % of imports, while in 2020 the share had fallen to 13 %. This decrease is closely related to the fall of the oil price in this period. 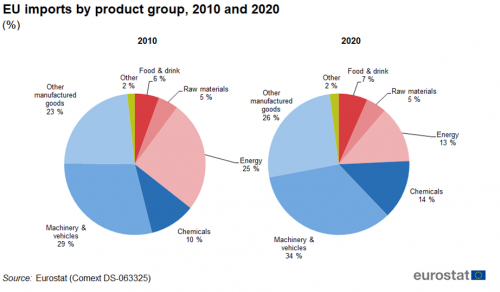 Europe is the world's largest exporter of manufactured goods and services, and is itself the biggest export market for around 80 countries. Trade is an important indicator of Europe's prosperity and place in the world, and the bloc has become deeply integrated into global markets both for the products it sources and the exports it sells.

Because the 27 Member States of the European Union share a single market and a single external border, they also have a single trade policy. Both in the World Trade Organization, where the rules of international trade are agreed and enforced, and with individual trading partners, EU Member States speak and negotiate collectively.