In November 2022, excess mortality varied across the EU. Bulgaria, Italy, Romania and Slovakia recorded little or no excess deaths. The most affected countries, Cyprus and Finland recorded excess mortality rates of 23.8 % and 20.5 % respectively, followed by Germany (15.6 %). 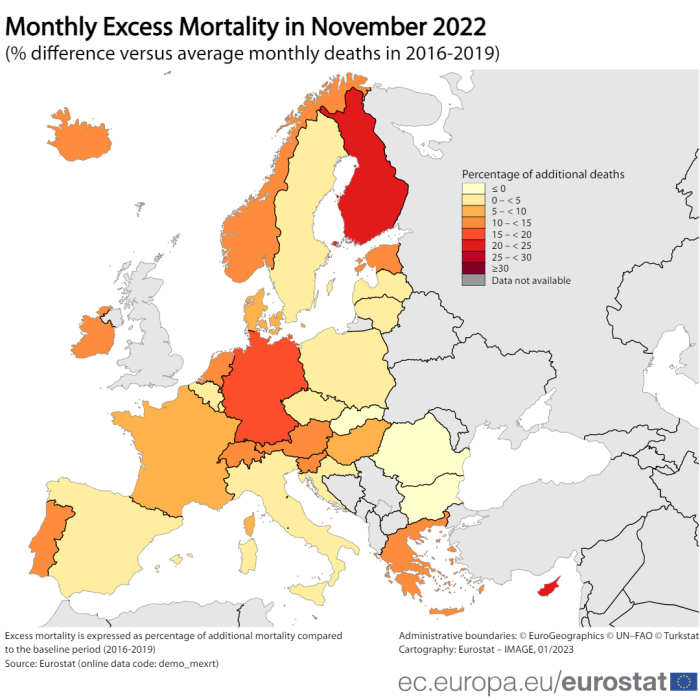 In this article, excess mortality refers to the number of deaths from all causes measured during a crisis, above what could be observed under 'normal' conditions. The excess mortality indicator simply takes the number of people who died from any cause, in a given period and compares it with a historical baseline from previous years in a period which was not affected by the pandemic. In this case, the baseline consists of the average number of deaths that occurred in each month during the period 2016-2019. The higher the value, the higher the amount of additional deaths compared with the baseline. In the case of a negative indicator, this means that fewer deaths occurred in a particular month compared with the baseline period.

This indicator – which is part of the European Statistical Recovery Dashboard - highlights the magnitude of the health crisis by providing a comprehensive comparison of additional deaths among European countries, allowing further analysis of the causes. While the international comparability of data directly associated with COVID-19 deaths may be arguable due to different rules for causes of death classification, as well as several under-coverage issues, this approach provides a general measure of the impact of the crisis on the mortality rate because it includes all deaths regardless of their cause.

The excess mortality indicator is based on a data collection in which national statistical institutes from the European Union (EU) and the European Free Trade Association (EFTA) have transmitted weekly deaths data to Eurostat on a voluntary basis since April 2020. The weekly deaths dataset that Eurostat publishes regularly is used to compute the monthly excess mortality indicator by mapping the deaths of each week to a full month. The data covered in this analysis include all deaths that have occurred since January 2020.

Excess mortality in the EU between January 2020 and November 2022

During the month of March 2020, the number of deaths rose rapidly in some European countries when compared with the average number of deaths in the period 2016 to 2019. The COVID-19 pandemic affected every part of the EU, however, its impact was not evenly spread. The highest peaks of a higher-than-average number of deaths during the first increase in COVID-19 cases in March-April 2020 were initially recorded in Italy and Spain, followed by France, Belgium and the Netherlands. During the period between March 2020 and February 2021, the EU experienced two waves of excess mortality: the first between March and May 2020 (reaching a 25.2 % excess rate in April) and a second between August 2020 and the end of the year (reaching a 40.0 % excess rate in November, the highest rate for the whole year). In this second wave, excess mortality rose in all EU Member States, this time with a geographical prevalence in the eastern part of Europe (Poland, Bulgaria and Slovenia reached an excess of more than 90.0 % in November 2020).

Based on the available information, some of the mortality increase in July and August 2022 compared with the same month of the past two years may be due to the heatwaves that have affected parts of Europe during the reference period. In September 2022, excess mortality in the EU decreased compared with the previous month and was 9.7 % of the average number for the same period in 2016-2019. In October 2022, the excess deaths slightly increased and the excess mortality in the EU stood at 10.6 %. 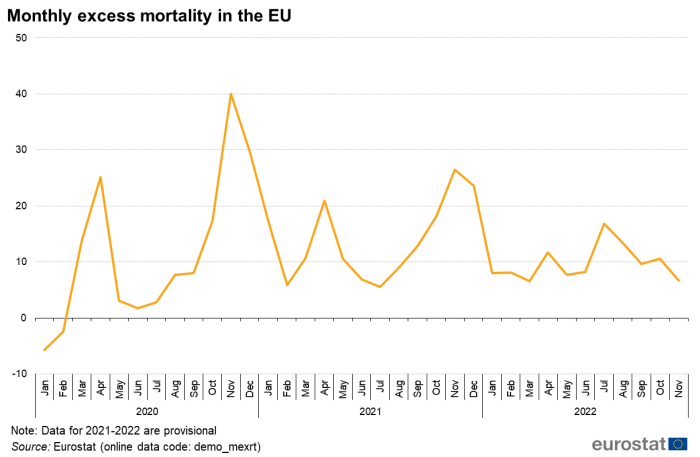 According to the weekly deaths statistics, between January 2020 and the end of November 2022, around 1.6 million additional deaths were recorded in the EU and EFTA countries, compared with the average number for the same period in 2016-2019 (see Weekly death statistics - Statistics Explained).

The peaks of the outbreak vary greatly across EU Member States

European countries were not affected in the same way or at the same time by the different excess deaths waves. Table 1 and the Excel file below, highlight the monthly rates of excess mortality in 2020, 2021 and 2022. The comparison of the number of deaths with data from the period 2016-2019 shows - at aggregate level - the exceptional situation that started in the first months of 2020. The first two months of the year presented lower values than those observed in previous years. However, while mortality normally started declining at the beginning of March, in 2020 – on the contrary – the number of deaths started to rise sharply. In March 2020, the values largely exceeded those recorded in the previous years and this gap was at its height in April, while in the following month there was a sharp decrease. Values for the summer period of 2020 showed a lower level of mortality, compared with the average of the previous period, but a new upward trend started at the end of August and increased in October, reaching a peak in November 2020 at 40.0 %, the highest rate so far. This second wave continued until January-February 2021 and was more geographically balanced than the first one, with a prevalence of higher excess mortality in the eastern regions of the EU. 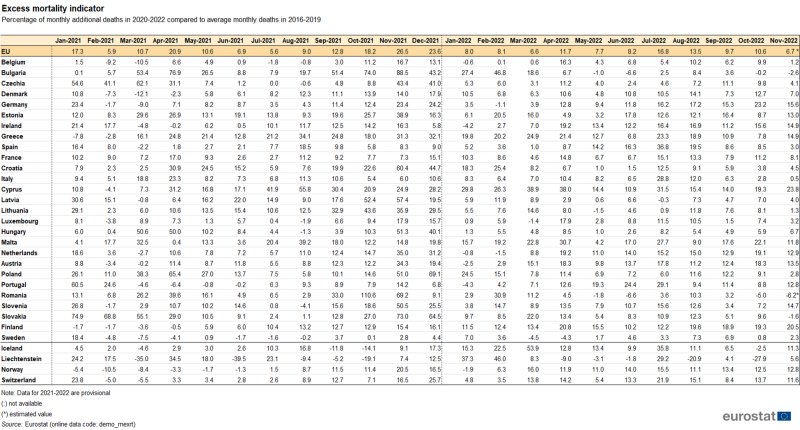 (The entire time series, including year 2020, can be found in the Excel table below)

In January and February 2021, a slight decrease in excess mortality was observed for most countries, continuing the trend at the end of 2020. A third smaller spike then followed in March and April 2021, reaching 20.9 % of excess mortality in April, compared with the baseline period 2016-2019. Some countries had very high rates, with excess mortality rates above 50.0 % in Bulgaria (76.9 % in April), Slovakia (74.9 % in January), Poland (65.4 % in April), Czechia (62.1 % in March) and Hungary (50.6 % in March), while others had no excess deaths at all. In May, June and July 2021, the overall number of deaths in the European Union declined further, reaching an overall rate of 5.6 % in July 2021, the lowest rate since July 2020. Between September and November 2021, while the overall rate increased for a fourth time to reach 26.5 % in November, excess mortality continued to vary considerably across the EU Member States. In October and November 2021, while some EU Member States (Romania, Bulgaria, Croatia, Slovenia, Czechia, Hungary, Slovakia, Poland, Estonia, Latvia and Lithuania) recorded excess mortality rates higher than 40.0 % (with Romania reaching 110.6 % in October), some others recorded rates below 20.0 %, or were even approaching a zero-excess rate (Table 1). In December 2021, excess mortality declined slightly to 23.6 % but continued to vary across EU Member States: from 4.4 % in Sweden to 64.5 % in Slovakia and 69.1 % in Poland.

In the first part of 2022, the fourth wave weakened, but not in all EU Member States. Although the overall rate fell to values more than three times lower than in November 2021, some EU Member States recorded excess mortality rates many times higher than the EU rate: Bulgaria (46.8 % in February), Cyprus (38.9 % in March) and Romania (30.9 % in February). By contrast, in Belgium and Germany the total number of deaths was very close to – or even below – their national monthly average for 2016-2019.

Data for the most recent months are provisional and subject to revision. This article and related table are updated monthly.

The COVID-19 pandemic has triggered tremendous interest in statistics. Hence, in April 2020, in cooperation with the national statistical institutes of the European Statistical System, Eurostat set up a special data collection on weekly deaths, in order to support the policy and research efforts related to the pandemic. National statistical institutes regularly and voluntarily transmit data to Eurostat on weekly deaths, up to the latest available week.

'Excess mortality' has been identified as the most useful indicator for assessing additional deaths, complementing the other indicators contained in the European Statistical Recovery Dashboard. In order to capture the dynamics of mortality changes in a more stable way, the excess mortality indicator is calculated for each month, no later than 45 days after the end of the reference period (depending on data available to Eurostat from the national statistical institutes). The indicator provides additional insight into the impact the COVID-19 crisis has had on European societies. It should be stressed again that, while a substantial increase largely coincides with a COVID-19 outbreak in each country, the indicator does not make a distinction between causes of death and does not differentiate sex or age class. Statistics on excess deaths provide information about the burden of mortality potentially related to the COVID-19 pandemic, thereby covering not only deaths that are directly attributed to the virus but also those indirectly related to it. In addition to confirmed deaths, excess mortality captures COVID-19 deaths that were not correctly diagnosed and reported, as well as deaths from other causes that may be attributed to the overall crisis situation. It also accounts for the partial absence of deaths from other causes like accidents that did not occur due, for example, to the limitations in commuting or travel during the lockdown period.