Among the European Neighbourhood Policy-South countries the share of young people under 15 years in 2018 ranged from 25.0 % in Tunisia to 38.7 % in Palestine, compared with 15.6 % in the EU.

With the exceptions of Morocco and Tunisia, the European Neighbourhood Policy-South countries had crude birth rates in 2018 that were at least twice as high as in the EU (9.7 live births per 1 000 inhabitants).

Among the European Neighbourhood Policy-South countries, only Israel recorded a higher life expectancy for both men and women than in the EU, while the lowest life expectancy at birth was recorded in Egypt for men (72.3 years) and in Jordan for women (74.2 years). 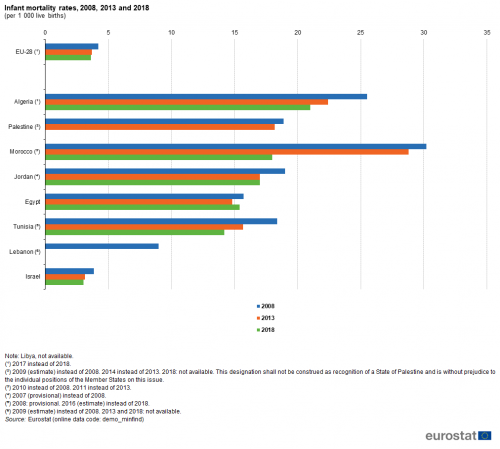 This article is part of an online publication and presents information relating to a range of demographic statistics for 9 of the 10 countries that form the European Neighbourhood Policy-South (ENP-South) region — Algeria, Egypt, Israel, Jordan, Lebanon, Libya, Morocco, Palestine [1] and Tunisia; no recent data are available for Syria. Aside from basic data on population levels, the article also provides information for these countries and the European Union (EU) on the crude birth rate, crude death rate, fertility rate, infant mortality rate and life expectancy.

Number of inhabitants and population density

All seven of the ENP-South countries (for which recent data are available) have a relatively young population structure (see Table 2), especially when compared with the EU-28, where 15.8 % of the total population was under 15 years of age in 2018. By contrast, in the ENP-South countries this share ranged from lows of around one quarter of the population in Lebanon (no recent data available) and Tunisia (25.0 %), rising to account for more than a quarter of the population in Morocco, Israel and Algeria (2017 data), and more than a third in Egypt and Jordan, peaking at 38.7 % in Palestine. These differences may be largely explained by far higher birth and fertility rates in the ENP-South countries. However, the share of people aged less than 15 years in the total population was relatively stable in most of the ENP South countries between the years shown in Table 2. The largest increase in the share of young people was in Egypt, while the largest decreases were in Palestine and Morocco..

The share of older people (defined here as those aged 65 years and above) in the total population of the EU-28 was 19.7 % in 2018, at least 8 percentage points higher than in any of the ENP-South countries. The high proportion of older people living in the EU-28 reflects, in part, greater longevity among the EU population and lower birth rates over many decades.

In a majority of ENP-South countries, older people accounted for much less than 10 % of the total population, with only Israel (11.6 %) recording a double-digit share. The lowest shares of older people were recorded in Palestine (3.2 %), Jordan (3.7 %) and Egypt (3.9 %). Between 2008 and 2018 the share of older people in the total population increased by 2.6 percentage points in the EU-28. In the ENP-South countries for which data are available, Egypt was the only one that did not report an increase in the share of older persons; elsewhere the increases (in percentage point terms) were more moderate than in the EU-28.

The natural rate of population change is linked to the number of births and the number of deaths in a country. With relatively low death rates (reflecting, in part, the young age structures of their populations), the ENP-South countries had very high crude rates of natural population increase in 2018, ranging from 11.9 per 1 000 inhabitants in Morocco to 26.7 per 1 000 inhabitants in Palestine. The rate in the EU-28 was not only considerably lower, but was in fact slightly negative, as the crude birth rate was 0.7 per 1 000 inhabitants lower than the crude death rate. As the birth and death rates in the EU-28 were almost balanced, changes in the EU-28’s overall population level in 2018 mainly reflected migration rather than natural change. The EU-28 recorded an increase in its crude death rate between 2008 and 2018. In Algeria (2008-2016) the crude death rate was unchanged, while the other ENP-South countries for which data are available reported a fall in their death rates (see Table 3).

Improved social and economic conditions, better healthcare and increased awareness of health issues all play a part in raising life expectancy and lowering infant mortality rates. Life expectancy at birth in the EU-28 and the ENP-South countries generally increased over the period shown in Table 4, although there was one exception, a fall in life expectancy for women in Jordan between 2011 and 2018. 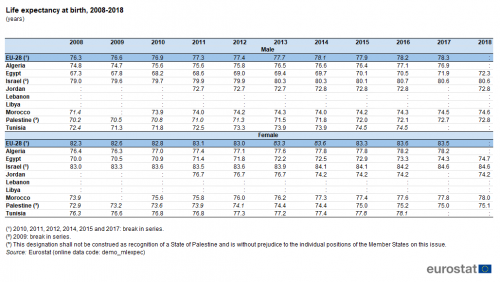 Israel was the only ENP-South country to record higher life expectancy at birth than in the EU-28 and this was true both for men and for women (2018 data). At the other end of the range, the lowest levels of life expectancy in 2018 among the ENP-South countries for which data are available were recorded in Egypt for men (72.3 years) and in Jordan for women (74.2 years).

The data for ENP-South countries are supplied by and under the responsibility of the national statistical authorities of each country on a voluntary basis. The data that are presented in this article result from an annual data collection cycle that has been established by Eurostat. No recent data are available from Syria. These statistics are available free-of-charge on Eurostat’s website, together with a range of different indicators covering most socio-economic areas.

Eurostat provides a wide range of demographic data, including statistics on populations at national and regional level, as well as for various demographic events influencing the size, the structure and the specific characteristics of these populations. Eurostat collects data from EU Member States and other countries participating in its demography data collection exercise (including the ENP-East countries) concerning the population as of 1 January each year. The recommended definition is the ‘usual resident population’ and represents the number of inhabitants of a given area on 1 January of the year in question (or, in some cases, on 31 December of the previous year).

Life expectancy at a certain age is the mean additional number of years that a person of that age can expect to live, if subjected throughout the rest of his or her life to the current mortality conditions; the information shown in this article relates to life expectancy at birth.

Life expectancy at birth rose rapidly during the last century due to a number of factors, including reductions in infant mortality, rising living standards, improved lifestyles and better education, as well as advances in healthcare and medicine. Statistics on population change and the structure of the population are increasingly used to support policymaking and provide an opportunity to monitor demographic behaviour within an economic, social and cultural context.

The EU’s population is ageing as consistently low birth rates and higher life expectancy transform the shape of its age pyramid. As a result, the proportion of people of working age in the EU-28 is shrinking while the relative number of those retired is expanding. This will, in turn, lead to an increased burden on those of working age to provide for the social expenditure required by the ageing population for a range of services.