All of the European Neighbourhood Policy-South countries recorded deficits for trade in goods with the EU in 2018, except Algeria which recorded a surplus.

In 2018, the EU was a key partner for trade in goods for most European Neighbourhood Policy-South countries, particularly Tunisia, Morocco and Algeria. 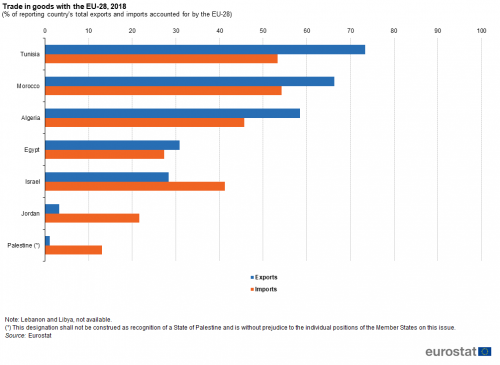 Trade in goods with the EU-28, 2018
(% of reporting country's total exports and imports accounted for by the EU-28)
Source: Eurostat

The EU-28 ran a trade deficit for goods with non-member countries in 2018, valued at EUR 22.9 billion. Equally, all of the ENP-South countries for which data are available recorded deficits for trade in goods in 2018 (2016 data for Libya; no recent data for Lebanon). Imports of goods exceeded exports by as much as EUR 44.6 billion in Egypt, while Morocco recorded a trade deficit of EUR 18.6 billion (see Table 1).

The EU-28’s exports of goods increased by 50 % in current price terms over the period 2008-2018, while imports increased by 25 %, the difference in these growth rates resulting in a much narrower trade deficit in 2018 than in 2008; note that in some of the intervening years the EU-28 recorded a surplus for trade in goods, for example in 2013 as shown in Table 1. There was also an expansion in the level of goods both imported and exported across nearly all of the ENP-South countries (for which data are available) during this period, despite sometimes large reductions in international trade during the financial and economic crisis; the exceptions were falls of 3.6 %, 34 % and 71 % in Jordanian, Algerian and Libyan (2008-2016) exported goods; Algerian and Libyan exports of goods are dominated by mineral fuels (petroleum and gas), lubricants and related materials and can vary greatly due to relatively volatile prices. Particularly strong export growth between 2008 and 2018 was recorded in Palestine where the value of goods exported more than doubled, increasing by 155 %.

The value of imported goods into Palestine and Egypt was more than twice as high in 2018 as it had been in 2008, while imported goods increased by more than 50 % in Libya (2008-2016) and Morocco. The smallest increases in the level of goods imported —under 20 % — were recorded in Jordan and Tunisia, both of which therefore recorded imports expanding at a slower pace than in the EU-28 (up 25 %) during the 10-year period shown in Table 1.

The result of these developments for exports and imports was that Algeria’s and Libya’s trade surpluses for goods in 2008 turned into deficits by 2018 (2016 for Libya). All of the remaining ENP-South countries for which data are available reported larger trade deficits for goods in 2018 than in 2008, most notably (in relative terms) Egypt and Israel.

Table 3 shows that the structure of imported goods was broadly comparable across most of the ENP-South countries and in relation to the EU-28. The three largest categories of imports (in value terms) were generally mineral fuels, lubricants and related goods; machinery and vehicles; other manufactured goods. Together these three groups accounted for just over three quarters (77.1 %) of the EU-28’s imported goods in 2018. A similar pattern was observed for many of the ENP-South countries, although there were exceptions. In Algeria imports of mineral fuels, lubricants and related goods were particularly low, as were imports of machinery and vehicles in Palestine, such that food, drink and tobacco appeared amongst the top three groups of goods that were imported into both of these countries. The relatively low share of mineral fuels, lubricants and related goods among imports in several ENP-South countries may, among other factors, be attributed to national supplies/endowments of energy sources, less demand for energy to heat homes, and/or lower motorisation rates: more data are available in the articles on energy and transport.

Trade between the EU-28 and ENP-South countries

Looking at the value of the trade flows, apart from Algeria, all of the ENP-South countries (for which recent data are available) recorded trade deficits for their trade in goods with the EU-28 in 2018.

There are generally close links between the EU-28 and many of the ENP-South countries in relation to the international trade of goods. This was particularly true for some of the Maghreb countries: in 2018, the EU-28 accounted for a majority of the total trade (imports plus exports combined) in goods for Tunisia, Morocco and Algeria. By contrast, the EU-28 was relatively less important as a partner for Palestinian international trade and the share of Jordanian exports destined for the EU-28 was also relatively low.

Figure 1: Trade in goods with the EU-28, 2018
(% of reporting country's total exports and imports accounted for by the EU-28)
Source: Eurostat

The data for ENP-South countries are supplied by and under the responsibility of the national statistical authorities of each country on a voluntary basis. The majority of the data presented in this article result from an annual data collection cycle that has been established by Eurostat. No recent data are available from Syria. These statistics are available free-of-charge on Eurostat’s website, together with a range of different indicators covering most socio-economic areas. More data are available from the United Nations’ Comtrade database.

The EU seeks to promote the development of free-trade as an instrument for stimulating economic growth and enhancing competitiveness. International trade statistics are of prime importance for both public sector (international, EU and national decision makers) and private users (in particular, businesses who wish to analyse export market opportunities), as they provide valuable information on developments regarding the exchange of goods between specific geographic areas. These statistics enable the EU to monitor the growth of trade ties with its ENP partners, while they are also used by the European Commission to prepare multilateral and bilateral negotiations for common trade policies.

In cooperation with its ENP partners, Eurostat has the responsibility ‘to promote and implement the use of European and internationally recognised standards and methodology for the production of statistics necessary for developing and monitoring policy achievements in all policy areas’. Eurostat undertakes the task of coordinating EU efforts to increase the statistical capacity of the ENP countries. Additional information on the policy context of the ENP is provided in the background article Statistical cooperation - European Neighbourhood Policy.