Relative to GDP, public expenditure on education in Morocco was similar to that in the EU, while in Israel the ratio was above the EU average and in Egypt it was below.

The proportion of people aged 30-34 years having completed tertiary education was higher in Israel (55 %) than in the EU (41 %).

This article is part of an online publication and provides data on education statistics for eight of the countries that form the European Neighbourhood Policy-South (ENP-South) region — Algeria, Egypt, Israel, Jordan, Lebanon, Morocco, Palestine [1] and Tunisia; no recent data are available for Libya or Syria. Recent developments for education statistics in these countries and in the European Union (EU) are presented. The article shows, among others, statistics on literacy rates, public expenditure on education, youth educational attainment and tertiary education.

Public expenditure on education as a share of GDP provides a measure of the relative importance given by governments to spending on education. Within the EU-28, the share of public expenditure on education during the period 2008-2014 was relatively stable, ranging from 4.9 % to 5.2 % (see Figure 1); the highest shares during this period were recorded towards the middle of the series, in 2009 and 2010, reflecting at least to some degree a reduction in overall economic activity due to the financial and economic crisis. The ratio of public expenditure relative to GDP fell below 4.9 % in the last three years for which data are available: in 2015 the ratio was 4.8 %, in 2016 it was 4.7 % and in 2017 it was 4.6 %. 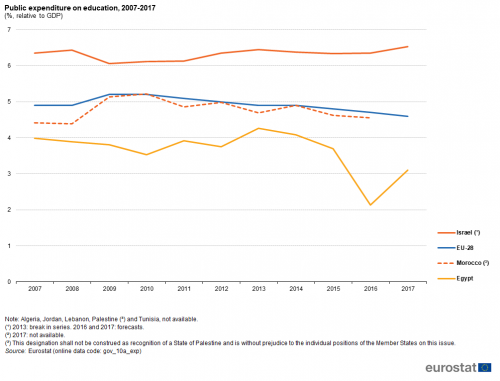 In Israel, public spending on education was consistently higher than in the EU-28 when expressed as a share of GDP, while in Egypt the ratio was below the EU-28 average. Since 2009, Morocco has recorded a ratio that has been similar (within 0.2 percentage points) to that recorded in the EU-28.

Across the world an estimated 773 million adults were unable to read or write in 2018, according to the UNESCO Institute for Statistics, with women accounting for approximately three fifths (63 %) of this total. By contrast, practically 100 % of the adult population in the EU-28 is literate. 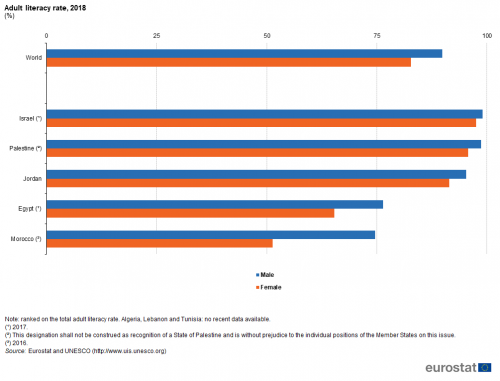 The highest adult literacy rates among ENP-South countries were recorded in Israel (99.0 % for men and 97.6 % for women in 2017). Literacy rates for Palestine and Jordan were also relatively high and above the world average for male and female rates.

Net enrolment rates among the ENP-South countries for primary education (classified according to the International Standard Classification of Education (ISCED) level 1) were often close to 100 % (see Table 1). The lowest rate among those ENP-South countries for which data are available was recorded in Jordan (86.6 %). An average for the EU-28 is not available, however the rates for EU Member States in 2017 ranged from 83 % in Slovakia to 99 % in the United Kingdom, Sweden, France, Belgium, Germany, the Netherlands, Finland and Denmark.

In most ENP-South countries, there were small differences between the sexes as regards the enrolment of boys and girls in primary education. In Egypt, the share of boys enrolled in primary education in 2017 was 3.5 percentage points lower than the corresponding share for girls (the biggest gender gap in favour of girls), while the only gap in favour of boys was a difference of 0.8 percentage points in Algeria (2015 data).

In each of the ENP-South countries for which data are available, a smaller proportion of children were enrolled in lower secondary education (ISCED level 2), which generally starts around the age of 11 or 12 and lasts for three to five years. The highest net enrolment rate for lower secondary education was recorded in Palestine (97.8 %). By contrast, the lowest rates were recorded in Morocco (2017 data), 58.1 % for boys and 56.4 % for girls. 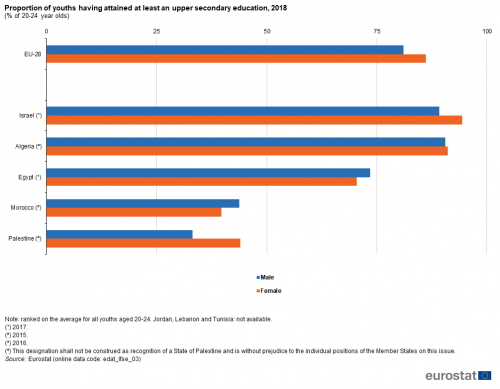 Recent data for the ENP-South countries show that the highest rate of youth educational attainment for men was 90.6 % in Algeria (2015 data), while for women it was 94.4 % in Israel (2017 data). The rates for women in Algeria and for men in Israel were also higher than the equivalent rates recorded across the EU-28. Among the remaining ENP-South countries for which data are available, the level of youth educational attainment was consistently lower than the EU-28 average both for men and for women. Palestine recorded the biggest gender gap (10.9 percentage points) in favour of young women for this level of educational attainment in 2018, while Morocco recorded the biggest gap (4.1 points; 2016 data) in favour of young men. 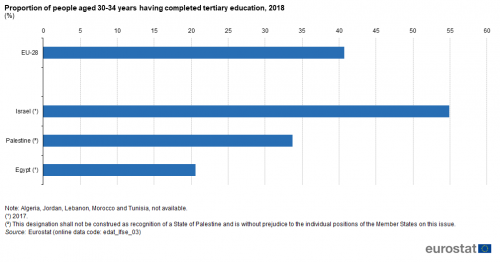 Figure 5 shows that in the EU-28, the ratio of male graduates in science and technology relative to the (male) population aged 20-29 years in 2017 was close to double the equivalent ratio for women. By contrast, the gender gap in Palestine was much smaller in 2018; this reflected, at least in part, the relatively high share of women who enrolled in tertiary education in Palestine. In Israel (2017 data) and Egypt (2016 data), the gender gap was, in relative terms, similar to that in the EU-28. In all three ENP-South countries for which data are available, the ratios for men and for women were considerably lower than in the EU-28. 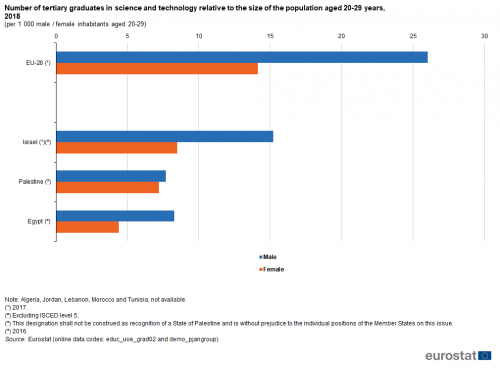 Figure 5: Number of tertiary graduates in science and technology relative to the size of the population aged 20-29 years, 2018
(per 1 000 male / female inhabitants aged 20-29)
Source: Eurostat (educ_uoe_grad02) and (demo_pjangroup)

Education statistics cover a range of subjects, including: expenditure, personnel, participation and attainment. The standards for international statistics on education are set by three organisations:

The main source of data for the EU-28 aggregate is a joint UNESCO/OECD/Eurostat (UOE) questionnaire on education systems and this is the basis for the core components of the Eurostat database on education statistics; Eurostat also collects data on regional enrolments and foreign language learning. EU-28 data on educational attainment are mainly provided through household surveys, in particular the EU [[Glossary:Labour force survey (LFS)|labour force survey (LFS)]].

Note that the collection of data on education underwent a considerable change as a result of the introduction of a new version of ISCED, namely ISCED 2011, replacing ISCED 1997. Longer time series are generally available on the basis of ISCED 1997, while data for the EU-28 and its Member States are often available on the basis of ISCED 2011 from the 2014 reference period.

In 2014, progress was assessed and priorities were reviewed: as a result, in November 2015 the Council adopted a set of six new priorities for the period 2016-2020 based on a joint report (2015/C 417/04) from the European Commission and the EU Member States.