With the exception of Israel, agriculture, forestry and fishing generally accounted for a much higher share of the workforce in 2018 in the European Neighbourhood Policy-South countries than in the EU.

In 2018, the number of sheep in the European Neighbourhood Policy-South countries was equivalent to about three quarters of the total across the EU, whereas there were at least two fifths more goats than in the EU. 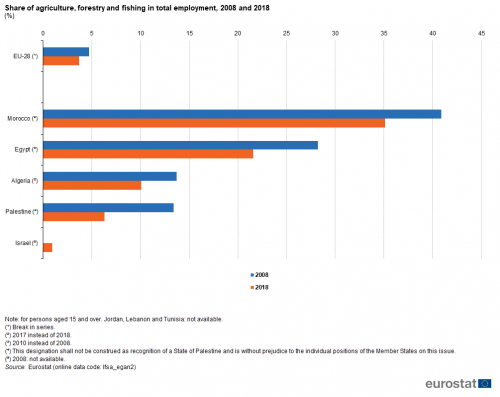 Share of agriculture, forestry and fishing in total employment, 2008 and 2018
(%)
Source: Eurostat (lfsa_egan2)

This article is part of an online publication and provides data on agricultural statistics for eight of the countries that form the European Neighbourhood Policy- South (ENP-South) region — Algeria, Egypt, Israel, Jordan, Lebanon, Morocco, Palestine [1] and Tunisia; no recent data are available for Libya or Syria. The article provides an overview of the key characteristics of agriculture in these countries and in the European Union (EU), providing statistics on the economic contribution of agriculture, forestry and fishing as well as agricultural output, including crop and livestock production.

Between 2008 and 2018, the share of the agriculture, forestry and fishing sector in total gross value added declined in half of the ENP-South countries: increases were recorded in Algeria, Tunisia (between 2008 and 2015), Jordan (between 2008 and 2016) and Morocco. Despite the reductions in Egypt, Lebanon and Palestine, the agriculture, forestry and fishing sector continued to account for a relatively high proportion of total economic activity in the vast majority of the ENP-South countries. While the output of agriculture, forestry and fishing in the EU-28 accounted for 1.6 % of total gross value added in 2018, its share ranged from 3.0 % in Palestine to 13.9 % in Morocco, with Israel (1.3 %) below this range and also below the share in the EU-28 (see Figure 1). 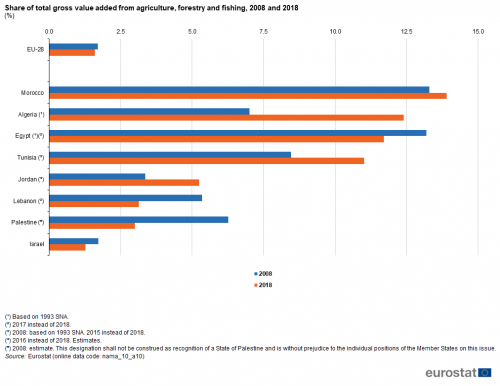 The employment share of agriculture, forestry and fishing in the ENP-South countries for which data are available was generally much higher than in the EU-28, although the share in Israel was lower (1.0 % in 2018). At the other end of the range, more than one third (35.1 %; 2017 data) of the total workforce in Morocco and one fifth (21.6 %) of the total workforce in Egypt were employed in agriculture, forestry and fishing.

The share of the total workforce in agriculture, forestry and fishing fell between 2008 and 2018 in the EU-28 and the four ENP-South countries for which data are available. The contraction in Palestine was particularly large, with this share more than halving from 13.4 % to 6.3 %. More data on the labour markets in the ENP-South countries are available in the Statistics Explained article European Neighbourhood Policy - South - labour market statistics.

The area within each country that is used for farming varies according to climate, terrain and soil type, while the level of economic development and population density may also play a role in determining land use. Within the EU-28 roughly equal proportions of land (around 40 % of the total land area in 2016) are used for farming on one hand and for forest and woodland on the other; the remainder of the land is built-up areas (villages, towns and cities), infrastructure (such as roads or railways), scrub or waste land. The proportion of land that is given over to agriculture was more than half of the total area in Tunisia (although no recent data are available), while in the four other ENP-South countries for which data are available the share was considerably less than in the EU-28, reflecting the mountainous terrains and desert landscapes of some ENP-South countries. The utilised agricultural area represented 13.2 % of the total area in Israel and also accounted for more than one tenth of the total area in Morocco (no recent data available), while lower shares were recorded in Algeria (3.6 %) and in Jordan (3.2 %) — see Figure 3. 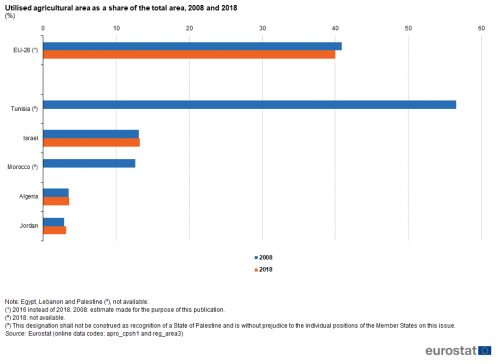 Several of the ENP-South countries are often characterised as being arid areas of unfertile soil, covered with rock and sand. Nevertheless, there are pockets of more fertile land within each of the ENP-South countries, particularly along river valleys or close to the coast. While the winter months often see relatively high levels of rainfall, some regions receive little or no rainfall during the summer months. The variability in rainfall patterns can play a considerable role in determining the success or failure of each harvest (as reflected in the figures for harvested production).

In 2018, the largest producers of cereals (and rice) among the ENP-South countries were Egypt (2017 data) and Morocco, with 22.8 million tonnes and 10.4 million tonnes of output respectively. Their main cereal crops were wheat (both countries), barley (Morocco) and grain maize (Egypt) — see Table 1.

The population of sheep and goats in most of the ENP-South countries was relatively high. This may, at least in part, be linked to the ability of these animals to survive in arid conditions (whereas the ideal conditions for rearing cattle include a plentiful supply of pasture). Pig farming is almost non-existent in ENP-South countries, reflecting the religious practices of their majority Muslim or Jewish populations.

The structure of animal output — as measured by the quantity of slaughtered production — differs from the structure of the animal populations in each country, in large part due to the fact that a proportion of cattle, sheep and goats are reared for milk (or wool in some cases) rather than for meat. In all of the ENP-South countries for which data are available (see Table 3), poultry accounted for the highest quantity of slaughtered production in the most recent year for which data are available. Production from sheep and goats outweighed production from cattle in Lebanon (2016 data), Palestine and Tunisia (no recent data for either).

Trade in food and live animals

The value of international trade in food and live animals has grown at a rapid pace over the last decade in nearly all of the ENP-South countries; note this may, in part, be due to increased prices as the values shown in Tables 4 and 5 are presented in current prices. Fluctuating prices for raw and processed foodstuffs may have a considerable impact on the trade position of a country, while climatic conditions can affect yields and determine if there is a surplus of food for export or if there is a deficit which may lead to higher levels of imports.

The EU-28 consistently ran a trade deficit in food and live animal products over the period 2008-2018; note that the trade data presented for the EU-28 in Tables 4 and 5 concern extra-EU trade. All of the ENP-South countries for which data are available also recorded trade deficits during this 10-year period with the exception of Morocco which recorded surpluses for food and live animals in 2009 and 2015-2018.

Whereas the trade deficit in these products was lower in 2018 than it had been in 2008 in the EU-28, the reverse was true for Algeria, Egypt, Israel, Jordan, Palestine and Tunisia, while, as indicated above, Morocco moved from a trade deficit for these goods in 2008 to a surplus in 2018.

The highest values of exports of food and live animals from the ENP-South countries in 2018 were recorded for Morocco (EUR 4.8 billion) and Egypt (EUR 3.6 billion), which were more than double the level of exports from Israel (EUR 1.6 billion) which recorded the third highest value. Palestine had the lowest level of exports of food and live animals among the ENP-South countries, some EUR 150 million in 2018.

Agriculture was one of the first sectors of the economy (following coal and steel) to receive the attention of EU policymakers, and statistics on agriculture were initially designed to monitor the main objectives of the common agricultural policy (CAP). While the CAP remains one of the EU’s most important policies there has been a widespread evaluation, which has led to a range of new objectives designed to correct imbalances and overproduction. These changes are reflected in the statistics collected, for example, the development of agri-environmental indicators.

In December 2013, a reform of the CAP was formally adopted by the European Parliament and the Council. The main elements of the CAP post-2013 concerned: a fairer distribution of direct payments (with targeted support and convergence goals); strengthening the position of farmers within the food production chain (such as through the promotion of professional and inter-professional organisations, changes to the organisation of the sugar and wine sectors, revisions to public intervention and private storage aid, and new crisis management tools); and continued support for rural development, safeguarding the environment and biodiversity.

In January 2015, the European Commission initiated a review of the legal basis related to agriculture in order to identify the potential for simplification. A broad range of interested bodies were invited to put forward simplification proposals and more than 1 500 proposals were submitted and examined based on the following three principles:

A number of actions have been taken, for example introducing more flexibility, providing greater guidance, or introducing preliminary cross checks of aid applications to reduce the risk of penalties.

The European Commission has presented legislative proposals — at the time of writing there remain under discussion — for reforming the CAP beyond 2020 (with the goal of ensuring that the CAP is more responsive to challenges such as climate change or generational renewal, while continuing to support farmers for a sustainable agricultural sector).