In 2020, Belarus had the highest motorisation rate among the European Neighbourhood Policy-East countries at 348 passenger cars per thousand inhabitants, followed by Georgia (320).

Tweet
In 2020, COVID-19 restrictions led to a substantial fall in rail passenger kilometres travelled in the ENP-East countries, with the exception of Moldova.
Tweet

In 2020, COVID-19 restrictions led to a substantial fall in the air passenger arrivals in ENP-East countries.

This article is part of an online publication; it presents information on a range of transport statistics for the European Union (EU) and for the six countries that together form the European Neighbourhood Policy-East (ENP-East) region, namely, Armenia, Azerbaijan, Belarus, Georgia, Moldova and Ukraine. Data shown for Georgia exclude the regions of Abkhazia and South Ossetia over which Georgia does not exercise control, and the data shown for Moldova exclude areas over which the government of the Republic of Moldova does not exercise control. Since 2014, data for Ukraine generally exclude the illegally annexed Autonomous Republic of Crimea and the City of Sevastopol and the territories which are not under control of the Ukrainian government. The article presents transport indicators covering road, rail, air and maritime transport.

Transport is fundamental to the economy and to society as a whole. There are considerable variations between the ENP-East countries as regards their level of economic development, their total (land) area and population numbers, as well as their geography. This is reflected in differences in the efficiency, safety and environmental impact of the transport sector, as well as the infrastructure and the stocks of transport equipment. Transport statistics need to evolve to respond to policy needs, informing development towards clean, safe and eﬃcient transport.

Among the ENP-East countries, car ownership is usually less commonplace than in the EU, and passenger cars tend to account for a lower share of the total number of road vehicles. Subject to data availability, Table 1 shows that Ukraine had the highest total number of passenger cars, at 6.8 million in 2010 (no fresher data are available for Ukraine), while the next highest counts (for 2020) were recorded in Belarus (3.3 million), Azerbaijan (1.3 million), Georgia (1.2 million). Moldova had the lowest number of passenger cars with 0.7 million (no data available for Armenia). 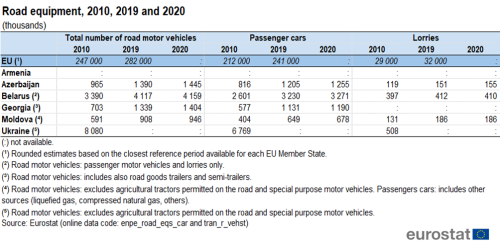 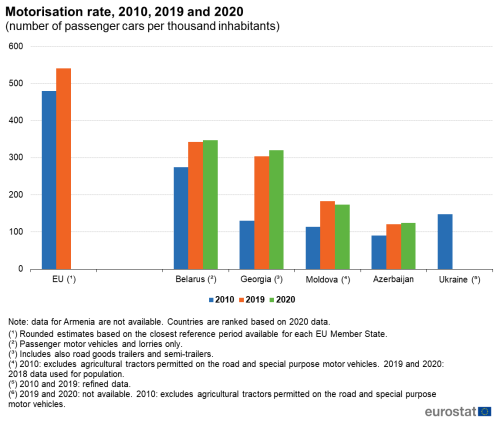 Figure 2 presents information on the number of persons killed in road accidents relative to the population. This provides a basis for comparing the frequency of road accidents between countries of different sizes. 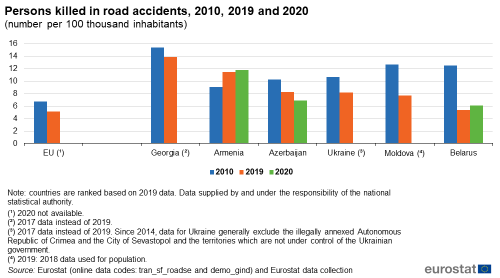 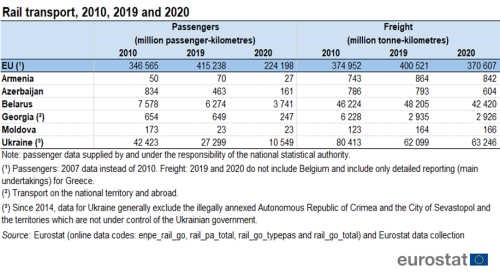 There has been considerable expansion in air services in recent decades, both in terms of passenger numbers and freight carried. Although there has been rapid growth, it is worthwhile noting that the weight of goods carried by air is relatively low, given the high cost of this mode of transport (for example, when compared with maritime freight) especially for bulky items. Table 3 presents two main indicators for air transport, namely the number of passenger arrivals and the quantity of air freight and mail arrivals.

To prevent the spread of the COVID-19 pandemic, countries around the world have taken a variety of restrictive measures since the beginning of 2020. The air transport industry was severely hit, in particular the transport of passengers. All ENP-East countries (excluding Georgia, for which there is no data available) and the EU registered falls of 60 % or more between 2019 and 2020. In 2020, there were 209 million air passenger arrivals in the EU. The combined number of arrivals in the ENP-East countries (excluding Georgia) was 7 million, which was equivalent to 3.3 % of the EU total. The highest number of air passenger arrivals among the ENP-East countries was registered in Ukraine (4.4 million), followed by Belarus (1 million), Azerbaijan (0.6 million), Armenia and Moldova (each 0.5 million).

The air freight and mail transport was certainly also impacted by the restrictions related to the COVID-19 pandemic albeit at a much lesser extent than air passenger transport. Moldova, Armenia and Ukraine recorded substantial falls between 2019 and 2020 in the volume of air freight and mail unloaded (-38 %, -25 % and -12 %, respectively). In contrast, Azerbaijan and Belarus registered a large growth over the same period (+32 % and +26 %, respectively).

Armenia, Belarus and Moldova are all landlocked countries, without sea ports. Thus, no data collection on maritime transport are applicable for these countries.

Azerbaijan has a relatively low level of maritime passenger activity, with 7 thousand passengers (excluding cruises) disembarked in Azerbaijani ports in 2020, an increase of three quarters compared to 2019 and of 59 % compared to 2010. Higher levels were observed for maritime freight, with Baku on the Caspian Sea playing an important role on Europe-Asia transit routes. Azerbaijan had the highest volumes of freight handled in its ports, among the ENP-East countries, in 2010 with 10.8 million tonnes. This fell to 8.2 million tonnes in 2019 and rose to 8.8 million tonnes in 2020. 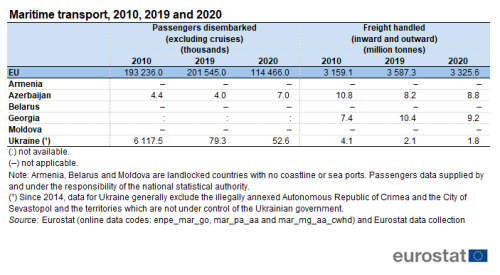 During the last decade, there was a substantial reduction in both the number of maritime passengers carried and the quantity of maritime freight handled in Ukraine. These developments may be linked to the political tension between Ukraine and Russia, which may have impacted on the lower passenger numbers arriving in Black Sea ports, while trade sanctions/embargos between Ukraine and Russia from 2014 onwards may explain (some of) the subsequent reduction in maritime trade. Note also that the data for 2019 and 2020 exclude the illegally annexed Autonomous Republic of Crimea and the City of Sevastopol, and thus do not cover any maritime passenger or freight transport activity in this region in these reference years.

The data for ENP-East countries are supplied by and under the responsibility of the national statistical authorities of each country on a voluntary basis. The data that are presented in this article result from an annual data collection cycle that has been established by Eurostat. These statistics are available free-of-charge on Eurostat’s website, together with a range of different indicators covering most socio-economic areas.

For the EU, transport statistics are available with an annual frequency and generally begin in the early 1990s. Eurostat’s statistics describe the most important features of transport, not only in terms of the quantities of freight and numbers of passengers that are moved each year, or the number of vehicles and infrastructure that are used, but also the contribution of transport services to the economy as a whole. Data collection is supported by several legal acts obliging the EU Member States to report statistical data (framework legislation and implementing legislation, organised according to the mode of transport under consideration), as well as voluntary agreements to supply additional data.

The majority of passenger transport statistics are based on vehicle movements in each of the reporting countries, regardless of the nationality of the vehicle or vessel involved (the ‘territoriality principle’). For this reason, the measure of passenger-kilometres (pkm, which represents one passenger travelling a distance of one kilometre) is generally considered as a more reliable measure, as a count of passengers entails a higher risk of double-counting, particularly for international transport.

Eurostat publishes transport safety data for road, rail, inland waterways, maritime and air transport. CARE is the European centralised database on road accidents which result in death or injury across the EU, developed on the basis of Council Decision 93/704/EC; it is managed by the Directorate-General for Mobility and Transport. A road death is defined as the number of deaths that are caused by road accidents and which occur within 30 days from the date of the accident; the count includes drivers and passengers in motorised vehicles and on bicycles who might be involved in road accidents, as well as pedestrians.

An efficient and well-functioning passenger and freight transport system is vital for enterprises and inhabitants. The ability to move goods safely, quickly and cost-efficiently to markets is important for international trade, national distributive trades, and economic development. The rapid increase in international trade up to the onset of the global financial and economic crisis and the deepening integration of the EU’s single market, alongside a range of economic practices (including the concentration of production in fewer sites to reap economies of scale, delocalisation, and just-in-time deliveries), may explain — at least to some degree — developments in the volume of freight being transported.

The European Commission’s Directorate-General for Mobility and Transport is responsible for developing transport policy within the EU. It aims to develop policy to foster clean, safe and efficient travel throughout Europe, underpinning the internal market for goods (transferring them between their place of production and consumption) and the right of citizens to travel freely throughout the EU (for both work and pleasure).