Azerbaijan was the only European Neighbourhood Policy-East country to record an external trade balance surplus in 2020.

Among the European Neighbourhood Policy-East countries reporting 2020 data, the EU accounted for 66 % of Moldova’s total exports, 21 % of Georgia's, 19 % of Belarus’s and 17 % of Armenia's.

Some 1.8 % of all goods exported from the EU in 2020 were destined for the six European Neighbourhood Policy-East countries, while 1.7 % of EU imports came from these countries.

This article is part of an online publication and presents information relating to recent developments for international trade in goods for the six countries that together form the European Neighbourhood Policy-East (ENP-East) region, namely, Armenia, Azerbaijan, Belarus, Georgia, Moldova and Ukraine, in particular concerning their trade relations with the European Union (EU).

Data shown for Georgia exclude the regions of Abkhazia and South Ossetia over which Georgia does not exercise control and the data shown for Moldova exclude areas over which the government of the Republic of Moldova does not exercise control. Since 2014, data for Ukraine generally exclude the illegally annexed Autonomous Republic of Crimea and the City of Sevastopol and the territories which are not under control of the Ukrainian government.

Exports, imports and the trade balance

International trade statistics track the value and quantity of goods traded between countries. They are the official source of information on imports, exports and the trade balance, the difference between them. The data in Table 1 show the total exports, imports and the trade balance as a percentage of the GDP of the ENP-East countries and the EU. This allows a focus on the change in the significance of trade flows relative to the size of the economies concerned.

Since the 1970s, global trends saw trade increasing as a proportion of GDP in most countries, although this trend levelled off during the 2010s. Increased trade has been an important element of globalisation, although far from the only one. Countries that are growing fast or are undergoing or recovering from economic difficulties may wish to run trade deficits, in which the value of imports is greater than that of exports. Countries that specialise in providing services to the rest of the world, such as tourism or business services, may also run consistent trade deficits, since services are not included in the statistics of exports and imports of goods. The balance of payments includes data on both trade in goods and in services.

Total trade, the sum of exports and imports (sometimes the average is used), as a percentage of GDP is often used as a measure of a country’s openness to world trade. Smaller countries tend to have higher levels of trade openness than larger ones, since there are fewer opportunities for buying and selling domestically produced goods. The relationship between trade openness and income (measured as GDP per capita) is more complicated, although low income countries generally have low trade openness.

Belarus has been consistently the most open economy of the ENP-East countries, with aggregate trade (i.e., imports plus exports) at 103 % of GDP in 2020. Over the period 2010-2020, its openness slightly declined by under 3 percentage points. During 2010-2012, both exports and imports grew. This was followed by a sharp decline in 2013. After a further decline, albeit slower, in 2014, a recovery followed, although not to the levels of 2012. Belarus started the period with a trade deficit equal to 17 % of GDP in 2010 before a rapid reduction in 2011 and 2012: exports grew faster than imports. In 2013, the fall in exports was larger than that of imports, so the trade deficit increased, remaining at broadly similar levels since. 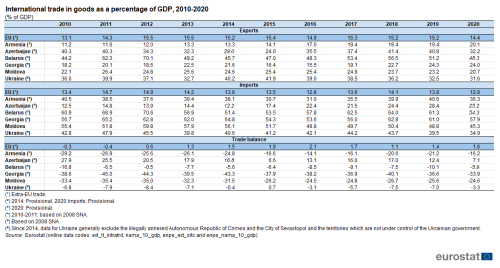 The statistics for the EU are shown for extra-EU trade only, treating the EU as a single trading entity. Its degree of trade openness, at 27 % of its GDP in 2020, is smaller than any of the ENP-East countries, which is due to its much larger economy.

The EU as a trading partner for the ENP-East countries

Figures 1 and 2 show the available data for ENP countries’ exports to and imports from the EU as a percentage of their total exports and imports over the period 2010-2020. 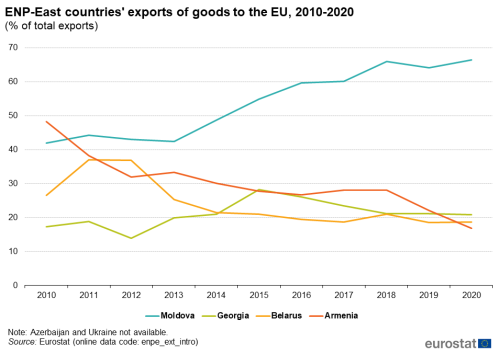 The share of the ENP-East countries' trade with the EU, relative to their GDP, is found by taking the share of exports and imports in GDP (Table 1) and multiplying it by the share of exports and imports to/from the EU in total trade (Figure 1 and Figure 2, respectively). For example, Armenia’s total exports in 2020 were equivalent to 20.1 % of GDP. Armenia’s exports to the EU in the same year accounted for 16.9 % of all trade. Multiplying these two percentage yields Armenia’s exports to the EU as share of GDP: in 2020, the result is 3 % of GDP. This calculation provides a measure of the relative importance to the ENP-East countries' economies of their trade with the EU. 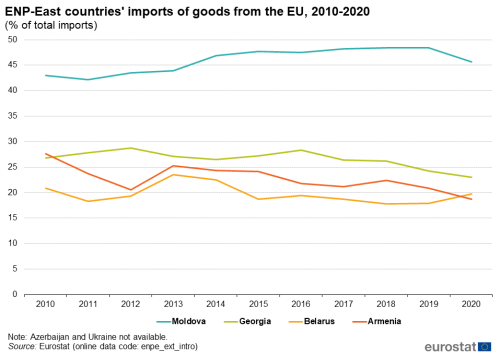 The ENP-East countries as trading partners for the EU

This section uses statistics compiled by Eurostat from data submitted by EU Member States. This differs from most of this Statistics Explained article, which uses data provided to Eurostat by the ENP-East countries. See the Data Sources section below for more information.

The relative importance of the EU’s trade in goods with the ENP-East countries has not changed much from 2010 to 2020, a period in which new trade partnerships developed. There is no clear trend during this period.

These statistics contrast with the increased openness to international trade of both the EU and some of the ENP-East countries, as discussed with reference to Table 1. 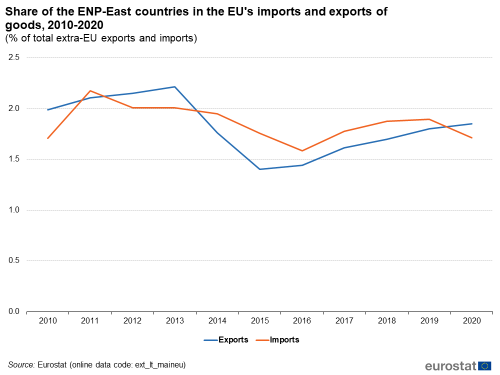 Figure 3: Share of the ENP-East countries in the EU's imports and exports of goods, 2010-2020
(% of total extra-EU exports and imports)
Source: Eurostat (ext_lt_maineu)

Figures 4 and 5 provide more detailed information as to the destination and origin of trade in goods between the EU and the six ENP-East countries in 2010 and 2020, based on data provided by the EU Member States to Eurostat. The following analyses look at trade valued in Euro. 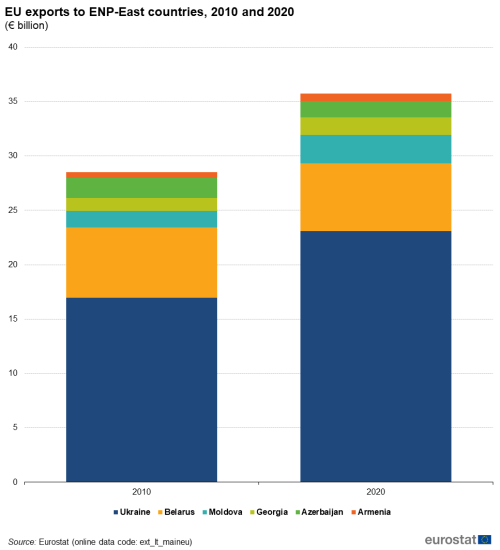 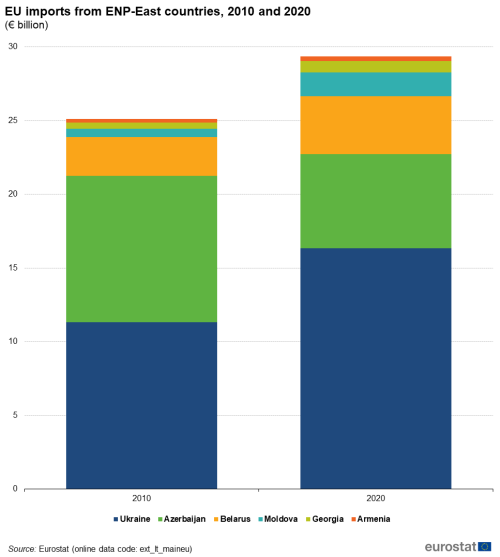 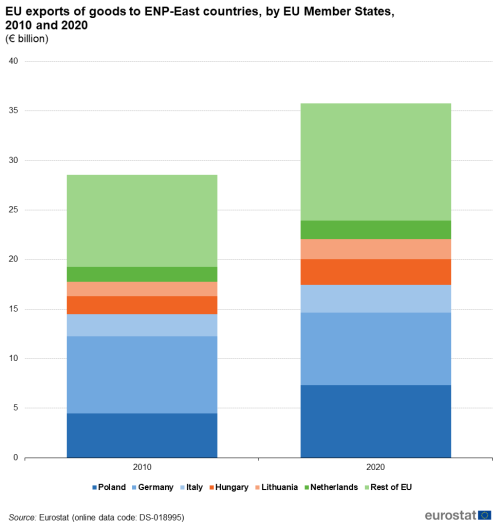 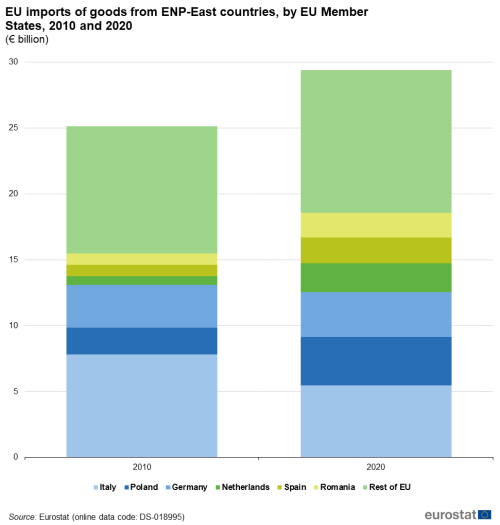 Main products traded between the ENP-East countries and the EU

Tables 2a, 2b and 2c provide, for each of the ENP-East countries, an analysis of their trade in goods with the EU by product group, as reported by the EU Member States to Eurostat. The 10 main sections shown follow the standard international trade classification (SITC Rev.4).

The EU’s principal exports to Armenia in 2020 were €254 million worth of machinery and transport equipment (SITC section 7), 36 % of total exports to that country of €716 million. Looking at the trade flow in the opposite direction, the EU imported manufactured goods (SITC section 6) worth €136 million from Armenia, 40 % of a total of €340 million.

Mineral fuels, lubricants and related materials (SITC section 3), at €6 292 million accounted for 98 % of the EU’s imports originating from Azerbaijan in 2020; this section includes coal, oil, natural gas and other petroleum products. Total EU imports from Azerbaijan in 2020 amounted to €6 415 million. EU principal exports to Azerbaijan in 2020 were €671 million of machinery and transport equipment, 45 % of a total of €1 498 million. 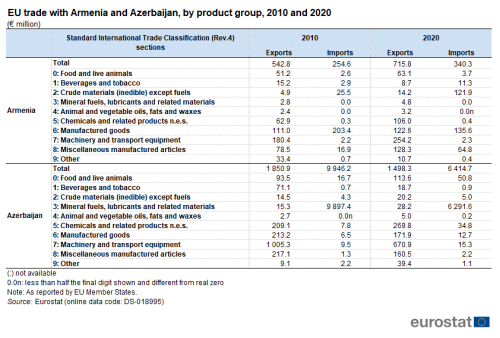 The EU's largest export product group to Belarus in 2020 was machinery and transport equipment, valued at €2 590 million, 42 % of a total of €6 228 million. The EU’s largest imports category from Belarus in 2020 was €1 243 million worth of manufactured goods, 32 % of a total of €3 913 million. In 2010, the EU’s largest product group of imports from Belarus was mineral fuels, lubricants and related materials.

The EU exported €420 million worth of machinery and transport equipment to Georgia in 2020. This was the largest group, accounting for more than 26 % of total EU-Georgia exports of €1 587 million. In 2010, EU exports of mineral fuels, lubricants and related materials were the largest product group. EU imports in 2020 from Georgia of €451 million of crude materials (inedible) except fuels (SITC section 2) were by far the largest product group, at 59 % of a total of €763 million. Growth in EU imports from Georgia of this product group over 2010-2020 has averaged 9.2 % a year. 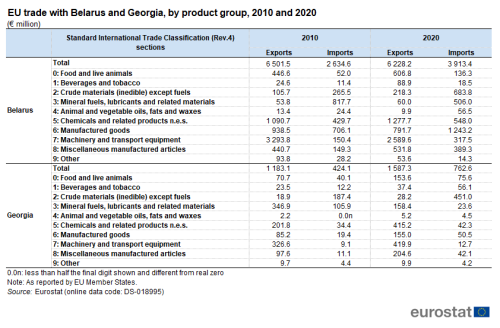 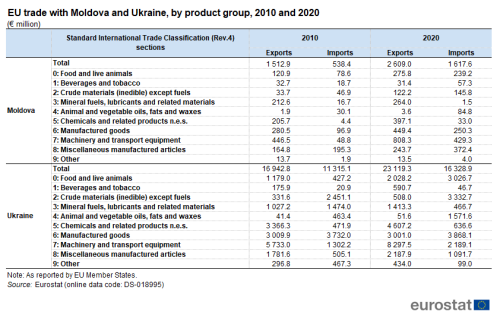 Traditionally, customs records are the main source of statistical data on international trade. Following the adoption of the Single Market in January 1993, customs formalities between EU Member States were removed, and so a new data collection system, intrastat, was set up for intra-EU trade. In the intrastat system, intra-EU trade data are collected directly from trade operators, which send a monthly declaration to the relevant national statistical administration.

Note that although trade flows should ideally mirror each other (in other words be the same from the perspective of the exporter and the importer), there may be considerable differences in the values presented depending upon which party (exporter or importer) is used as the reporting entity. This is the case even when the difference is taken into account between the valuation of exports as free on board (fob) and of imports incorporating cost, insurance and freight (cif). These discrepancies are often referred to as asymmetries and can be seen when bilateral data for two reporting parties are compared. Generally, while international recommendations for reporting trade statistics exist, countries may adopt methodologies that deviate from the recommendations for practical reasons. Consequently, when exports from country A to country B are compared with imports into country B from country A, the figures rarely (if ever) match. More information concerning the causes of asymmetries can be found in the user guide for statistics on the trading of goods.

The EU has a common international trade policy, often referred to as the common commercial policy. In other words, the EU acts as a single entity on trade issues, including issues related to the World Trade Organisation (WTO). In these cases, the European Commission negotiates trade agreements and represents the interests of the EU Member States.

The EU seeks to promote the development of free trade as an instrument for stimulating economic growth and enhancing competitiveness. International trade statistics are of prime importance for both public sector (decision makers at international, EU and national levels) and private users (in particular, businesses who wish to analyse export market opportunities) as they provide valuable information on developments regarding the exchange of goods between specific geographical areas. These statistics enable the EU to monitor the development of trade ties with its ENP partners, while they are also used by the European Commission to prepare multilateral and bilateral negotiations for common trade policies.

Moldova, together with the Western Balkan countries, is a member of the Central European Free Trade Agreement (CEFTA). CEFTA seeks to promote trade within the Central European region by eliminating tariffs to regional trade and identifying and reducing non-tariff barriers to trade.

The Deep and Comprehensive Free Trade Areas (DCFTA) are linked with the EU Association Agreements negotiated separately with Georgia, Moldova and Ukraine. The DCFTAs allow these countries access to the European Single Market in selected sectors, while granting EU investors in those sectors the same regulatory environment in these countries as in the EU.

In cooperation with its ENP partners, Eurostat has the responsibility ‘to promote and implement the use of European and internationally recognised standards and methodology for the production of statistics necessary for developing and monitoring policy achievements in all policy areas’. Eurostat undertakes the task of coordinating EU efforts to increase the statistical capacity of the ENP countries. Additional information on the policy context of the ENP is provided here.

International trade of EU, the euro area and the Member States by SITC product group (ext_lt_intertrd)