Between 2008 and 2018 the mobile phone penetration rate increased in Georgia and Moldova by 94 % and 82 % respectively, resulting in higher rates than the EU average.

Among the ENP-East countries, the share of households with access to the internet at home in 2018 was highest in Azerbaijan (78 %) and lowest in Moldova (51 %), compared with 88 % in the EU. 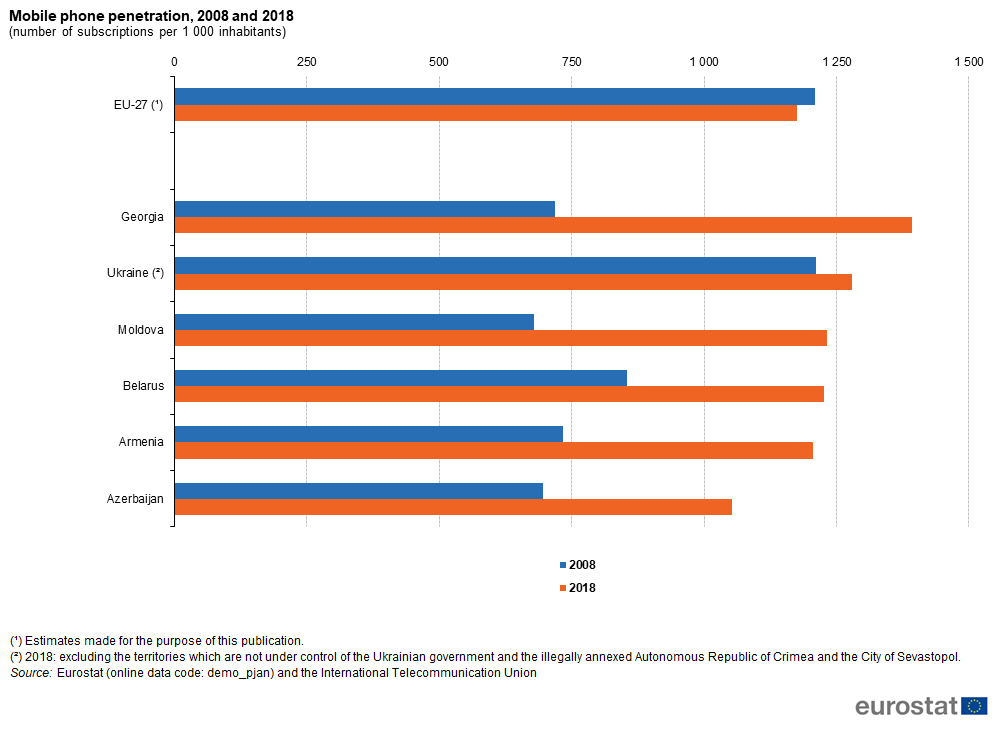 This article is part of an online publication; it presents information for the European Union (EU) and six countries that together form the European Neighbourhood Policy-East (ENP-East) region, namely, Armenia, Azerbaijan, Belarus, Georgia, Moldova and Ukraine. Data shown for Georgia exclude the regions of Abkhazia and South Ossetia over which Georgia does not exercise control and the data shown for Moldova exclude areas over which the government of the Republic of Moldova does not exercise control. The latest data for Ukraine generally exclude the illegally annexed Autonomous Republic of Crimea and the City of Sevastopol and the territories which are not under control of the Ukrainian government (see specific footnotes for precise coverage).

The first part of this article provides details in relation to telecommunications and ICT usage: the penetration rate of mobile phone subscriptions and fixed telephone lines, households having access to a personal computer or the internet, and the use of the internet by enterprises.

Over the period 2008-2018, the increase in the mobile phone penetration rate — the number of subscriptions relative to the size of the population — was fastest among the ENP-East countries in Georgia (see Figure 1), where the number of subscriptions per inhabitant nearly doubled, up 94 %. Moldova also recorded a relatively large increase (up 82 %), while increases in Armenia, Azerbaijan and Belarus ranged from 44 % to 64 %. At 6 % the increase in Ukraine was notably lower although, as for the EU-27, the mobile phone penetration rate was already relatively high in 2008.

Figure 2 presents information on the number of fixed telephone lines per 1 000 inhabitants. Fixed telephone lines connect a customer’s equipment (telephone handset or fax machine) to the public switched telephone network (PSTN). This indicator, together with that for mobile telephony, is one of the broadest and most common measures used to evaluate the development of telecommunications.

As mobile technology became abundant, the number of fixed telephone lines fell in the EU and in most of the ENP-East countries 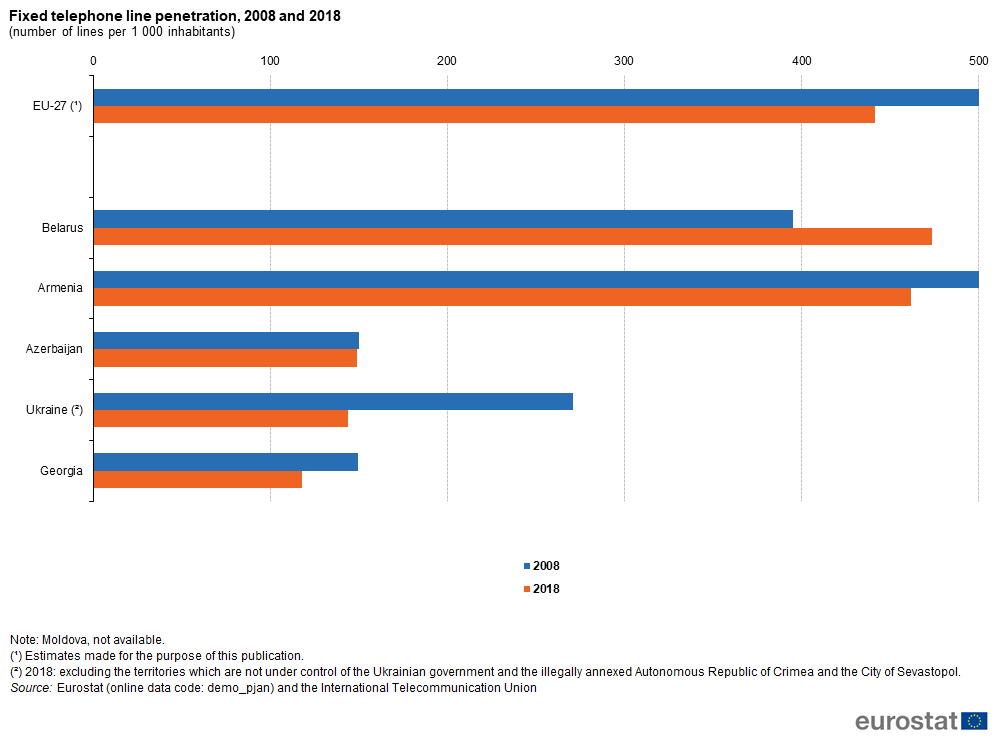 Looking at the latest available data, Belarus and Armenia recorded the highest ratios of fixed telephone lines in 2018, with 474 and 462 per 1 000 inhabitants respectively (no data available for Moldova), both of which were therefore just above the EU-27 average. Azerbaijan, Ukraine and Georgia recorded much lower ratios, in the range of 118-149 fixed telephone lines per 1 000 inhabitants.

As in the EU-27, there was a reduction between 2008 and 2018 in the number of fixed telephone lines per 1 000 inhabitants in four of the five ENP-East countries for which a time series is available. Belarus was the exception as the ratio increased by 79 lines per 1 000 inhabitants, equivalent to an increase of 19.8 %. In Azerbaijan the overall decrease between 2008 and 2018 was very small (down 0.8 %) while elsewhere the decreases ranged from 20.9 % in Georgia to 46.8 % in Ukraine. 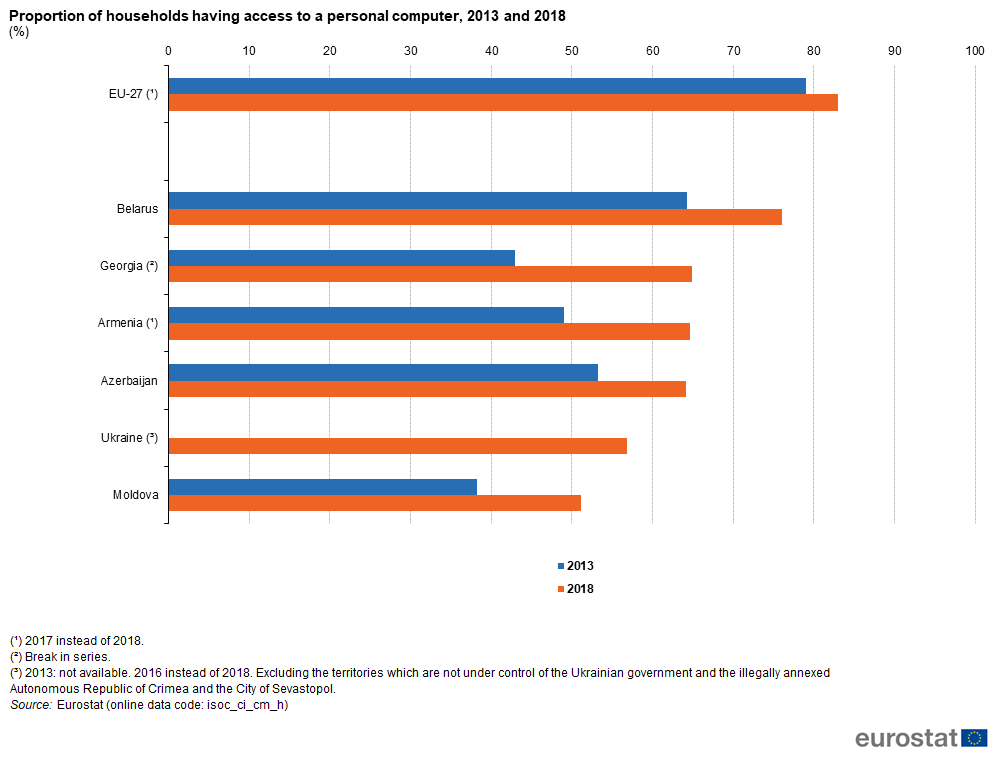 The proportion of households with access to a PC in the ENP-East countries was lower than in the EU-27. Just over three quarters (76 %) of households in Belarus had access to a PC in 2018, while the share was around two thirds in Georgia (65 %), Armenia (65 %; 2017 data) and Azerbaijan (64 %). The corresponding ratios in Ukraine (2016 data) and Moldova were somewhat lower but nevertheless above half: 57 % in Ukraine and 51 % in Moldova. All of the ENP-East countries for which a time series is available reported an increase in this ratio between 2013 and 2018. The largest increase was in Georgia where the ratio increased by 22 percentage points (note that there is a break in series). 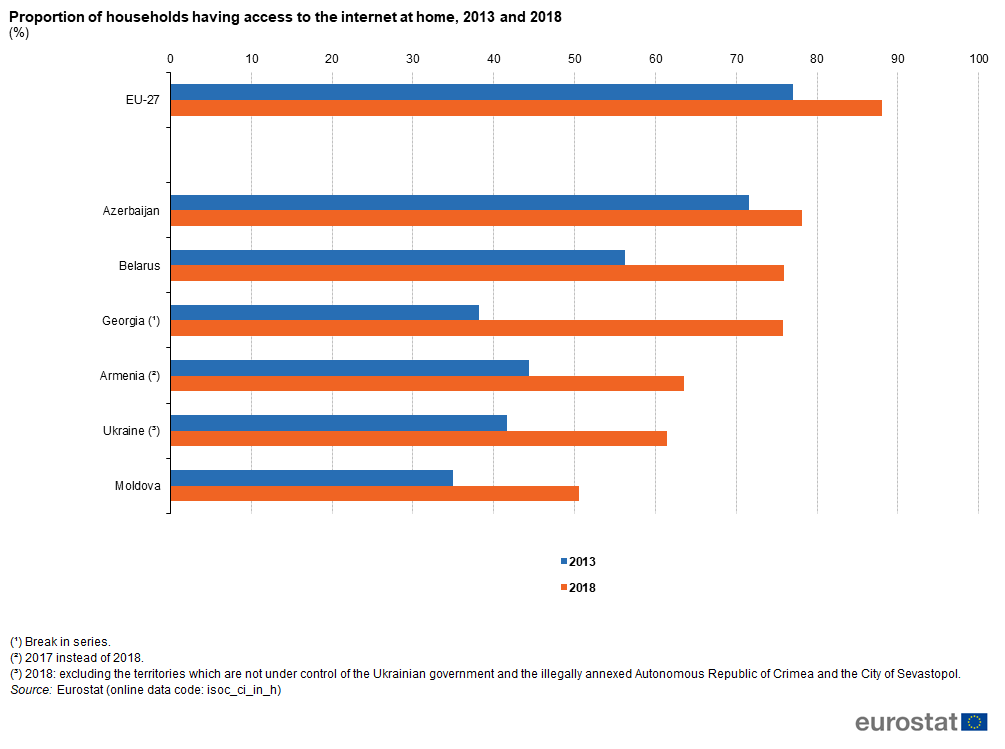 Just over three quarters of households had access to the internet at home in Azerbaijan, Belarus and Georgia

The data shown in Figure 5 for the proportion of enterprises having access to the internet refer to enterprises with 10 or more persons employed (unless otherwise footnoted). Practically all of the enterprises in the EU-27 (97 %) had access to the internet in 2018. Similarly high proportions were reported in Belarus, Georgia (2016 data) and Ukraine while a notably lower proportion — 69 % — was recorded for Azerbaijan; no recent data are available for Armenia or Moldova. Comparing the data for the two years shown in Figure 5 there has been little change in this ratio in recent years, neither in the EU-27 nor in the ENP-East countries for which data are available. 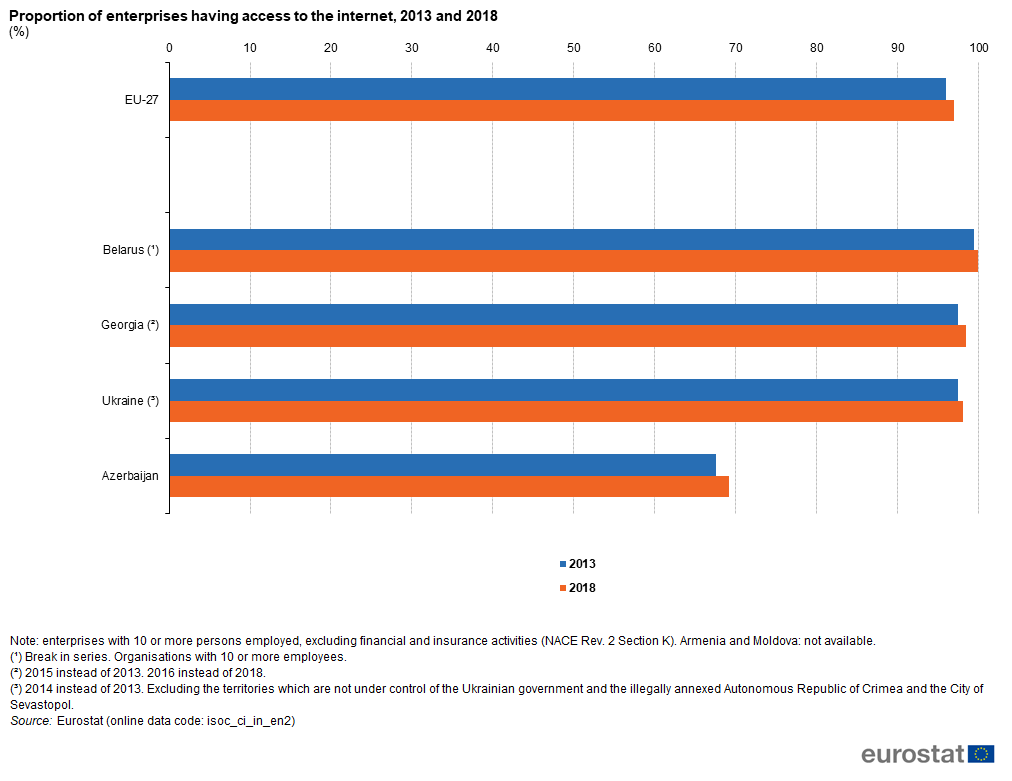 In 2018, gross expenditure on R & D was valued at EUR 295 billion in the EU-27, which was 23.0 % higher than five years earlier. R & D expenditure in Ukraine was valued at EUR 522 million, which was equivalent to 0.2 % of the level in the EU-27. Belarus recorded EUR 307 million of R & D expenditure while in the remaining ENP-East countries for which data are shown in Table 1 (no recent data for Georgia) the level of expenditure was considerably lower, ranging from EUR 73 million in Azerbaijan to EUR 22 million in Armenia (2016 data).

Armenia and Moldova reported increases in R & D expenditure between the years shown in Table 1. By contrast, expenditure in Ukraine (note that there is a break in series), Azerbaijan and Belarus declined.

Figure 6 shows how R & D intensity developed over a 10-year period. For the early part of this period Ukraine recorded the highest R & D intensity among the ENP-East countries, but this dropped from a peak of 0.83 % in 2009 to 0.48 % by 2016 (in part due to a break in series in 2014) at which point in time it fell below the level in Belarus (whose R & D intensity had also fallen in recent years). Moldova reported a fairly steady decrease in its R & D intensity over the period under consideration, approximately halving in value but maintaining its third place among the ENP-East countries. Armenia and Azerbaijan recorded relatively sharp increases in their R & D intensities in 2009, a decline in 2010 and then a sustained period of relative stability until 2015, with a decline thereafter. The short time series available for Georgia shows more volatility, with a substantial increase in the intensity between 2008 and 2011 (overtaking Azerbaijan and Armenia in 2010) followed by a somewhat stronger fall between 2011 and 2013 (dropping back below Azerbaijan and Armenia in 2012). 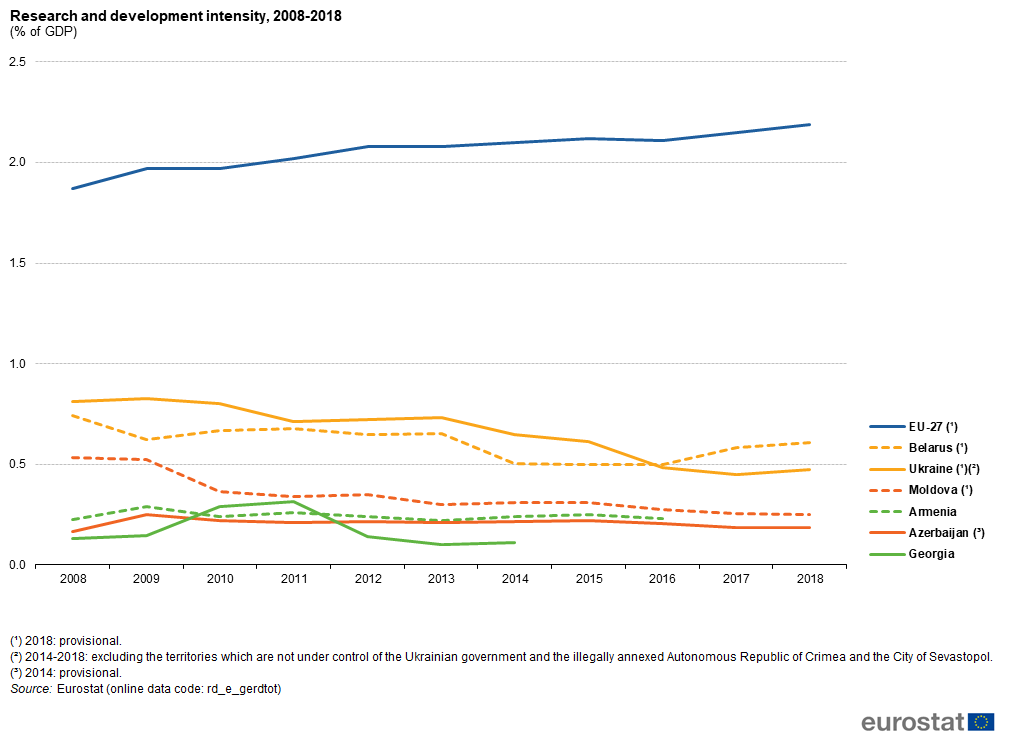 An analysis of R & D expenditure by source of funds shows that close to three fifths (59 %) of the total expenditure within the EU-27 in 2017 was funded by business enterprises, while three tenths (30 %) was funded by government and nearly one tenth (9 %) came from abroad (foreign funds); the other sources include private non-profit organisations (1 %) and higher education (1 %) — see Figure 2. In Belarus, the business enterprise sector was also the largest source of funding for R & D, providing more than two thirds (69 %) of the total in 2018. By contrast, in Moldova and Azerbaijan the government sector provided more than two thirds (77 % and 69 % respectively) of funding, while in Ukraine this sector was also the largest source of funds with a 46 % share. 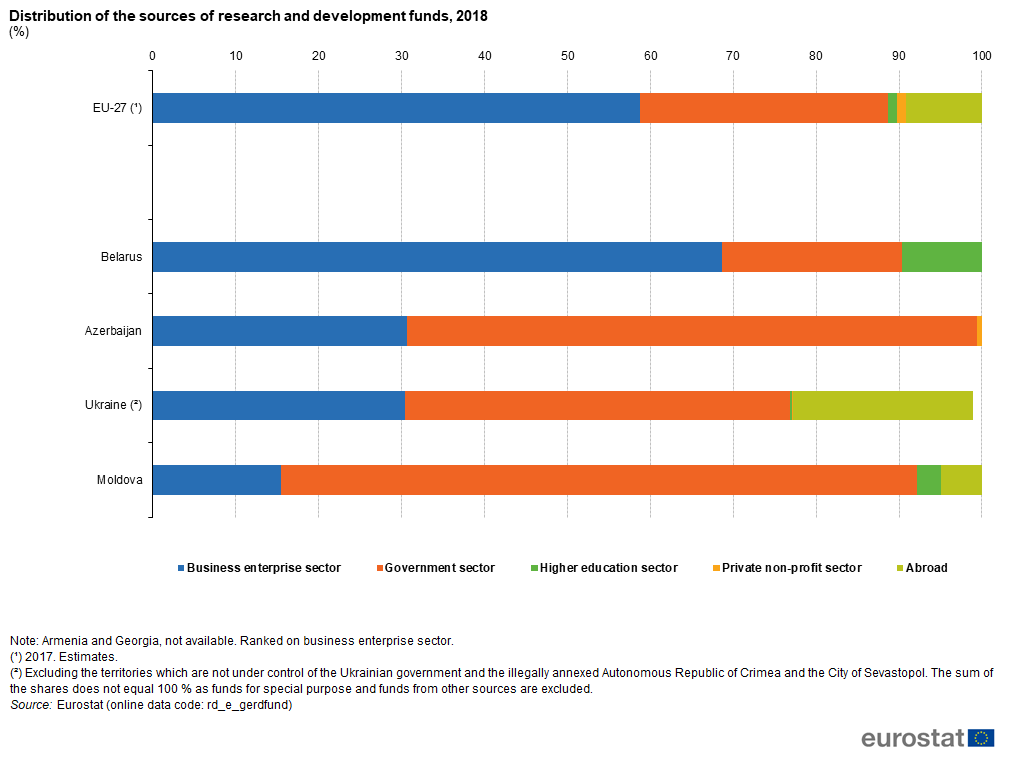 Figure 7: Distribution of the sources of research and development funds, 2018
(%)
Source: Eurostat (rd_e_gerdfund)

Compared with the EU-27, the higher education sector provided a relatively large proportion of R & D funding in Belarus (10 %) and to a lesser extent Moldova (3 %). Funds from abroad also played a much greater role in Ukraine than in the EU-27, providing more than one fifth (22 %) of funding in 2018.

Research and development personnel and researchers

The number of R & D personnel in the EU-27 increased in recent years. There were 2.80 million persons employed (in full-time equivalents) directly on R & D, as well as those providing direct services such as R & D managers, administrators and clerical staff in 2018 (see Table 2). This marked an increase of 452 000 (or 19.3 %) when compared with 2013. Among these were 1.77 million researchers, in other words professionals engaged in the conception or creation of new knowledge, products, processes, methods and systems, and in related project management. 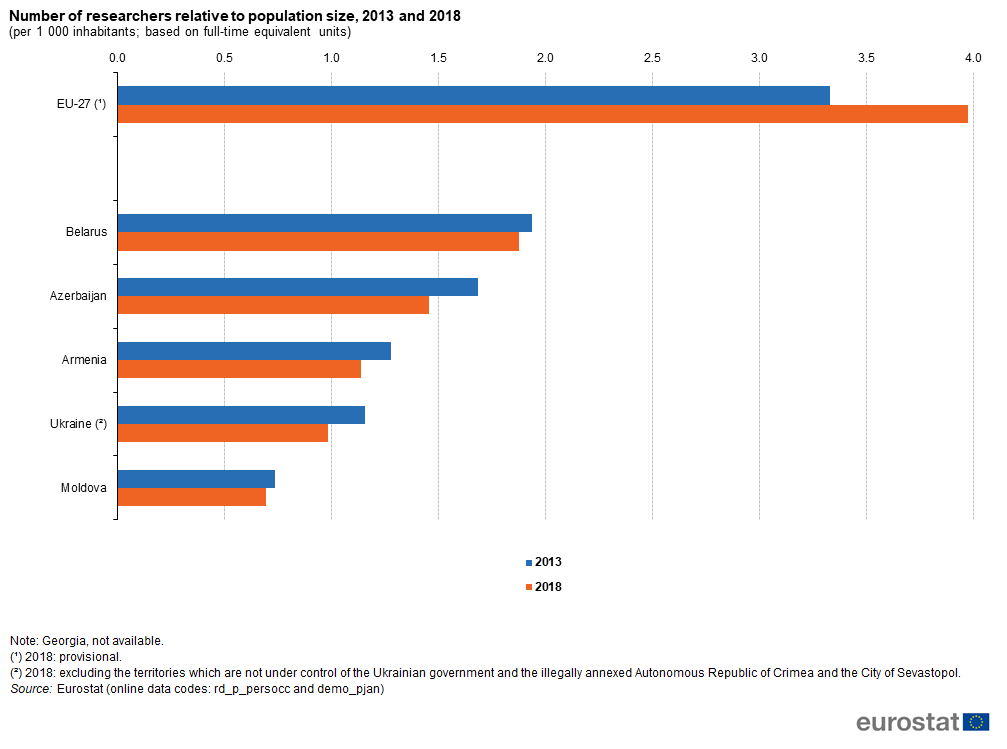 Figure 8: Number of researchers relative to population size, 2013 and 2018
(per 1 000 inhabitants; based on full-time equivalent units)
Source: Eurostat (rd_p_persocc) and (demo_pjan)

Eurostat’s survey on ICT usage in households and by individuals is an annual survey used to benchmark ICT-driven developments. Eurostat’s survey on ICT usage in enterprises is also an annual survey and generally covers enterprises with at least 10 persons employed; note that the activity coverage excludes financial and insurance activities (NACE Rev. 2 Section K). These surveys follow developments for a set of core variables over time and also provide greater depth for specific subjects (through ad-hoc additional survey modules). While the surveys initially concentrated on access and connectivity issues, their scope has subsequently been extended to cover a range of subjects (for example, e-government, social media or e-commerce). Within the European statistical system, these two surveys are based on two methodological manuals: one for enterprise statistics and one for statistics related to households and individuals; these manuals are updated annually. The definitions which the ENP-East countries have been asked to follow when providing data are based on the methodology contained within these two manuals.

Eurostat data on research and development (R & D) aim to show a comprehensive picture of the situation in the EU, covering indicators related to expenditure and personnel. Most of the main indicators within this domain are available at a national and a regional level for the EU Member States. The international standards for collecting and reporting data on research and experimental development are specified in the Frascati Manual. The definitions which the ENP countries have been asked to follow when providing data are based on the methodology contained within that manual.

R & D personnel consist of all individuals employed directly in the field of R & D, including persons providing direct services, such as managers, administrators and clerical staff.

Information and communication technologies (ICTs) affect people’s everyday lives in many ways, both at work and in the home, for example, through communications with friends and colleagues or buying and ordering goods online. The development and expansion of the information society is regarded as critical to improve the competitiveness of the EU, while EU policymakers also seek to regulate specific areas, such as e-commerce or the protection of an individual’s privacy when using such technologies.

R & D is the main driver of innovation, with the level of R & D expenditure and the ratio of R & D intensity being two of the key indicators used to monitor resources devoted to science and technology.