In 2018, people aged 65 years and more made up a smaller part of the population in the six European Neighbourhood Policy-East countries than in the EU where they accounted for almost one fifth of the total population.

Three of the six European Neighbourhood Policy-East countries, Azerbaijan, Armenia and Georgia recorded higher crude birth rates than death rates in 2018 while the opposite was true in the EU, Moldova, Belarus and Ukraine.

Compared with the EU (1.60 children per woman), fertility rates in 2016 were notably higher in Georgia and Azerbaijan, similar in Belarus and Armenia but lower in Ukraine and Moldova. 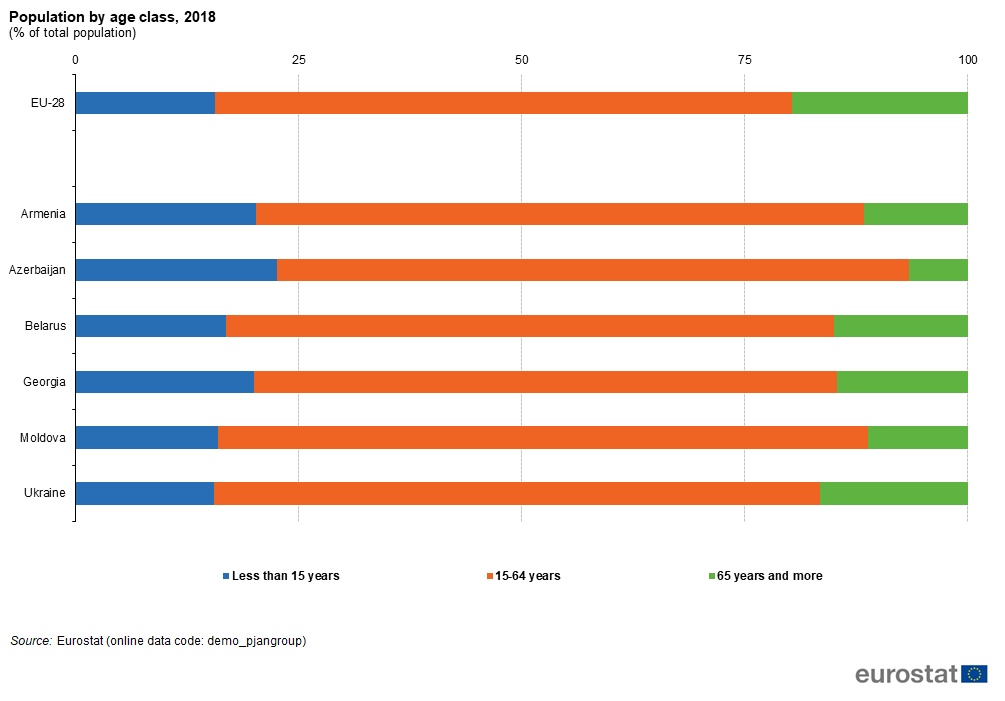 This article is part of an online publication and presents information relating to a range of demographic statistics for the European Union (EU) and the six countries that together form the European Neighbourhood Policy-East (ENP-East) region, namely, Armenia, Azerbaijan, Belarus, Georgia, Moldova and Ukraine. Data shown for Georgia exclude the regions of Abkhazia and South Ossetia over which Georgia does not exercise control and the data shown for Moldova exclude areas over which the government of the Republic of Moldova does not exercise control. The latest data for Ukraine generally exclude the illegally annexed Autonomous Republic of Crimea and the City of Sevastopol and the territories which are not under control of the Ukrainian government and this may, in turn, impact on the comparability of the time series.

Aside from basic data on population levels and the structure of the population, this article also provides information on crude birth rates and crude death rates, the total fertility rate, life expectancy at birth and the infant mortality rate.

The total population of the six ENP-East countries was 71.9 million persons in 2018 (including 2017 data for Moldova), which was equivalent to approximately 14.0 % of the total number of inhabitants in the EU-28 (see Table 1). Ukraine was the most populous of the ENP-East countries with 42.2 million inhabitants in 2018, while Azerbaijan (9.9 million) and Belarus (9.5 million) had the second and third largest populations. Georgia, Moldova and Armenia had the smallest populations, with 3.7 million, 3.6 million (2017 data) and 3.0 million inhabitants respectively.

Between 2008 and 2018 the population of the EU-28 rose at a relatively modest pace (with average growth of 0.2 % per annum). Among the ENP-East countries, there were five countries with declining populations during the most recent 10-year period for which data are available: Georgia, Ukraine, Armenia, Belarus and Moldova (2008-2017); note that there is a break in series for Georgia and Ukraine. More details on some of the reasons behind these reductions in population are provided below under the heading Crude birth and death rates. By contrast, the population of Azerbaijan grew at a much faster rate than that of the EU-28, rising overall by 14.7 % between 2008 and 2018 (equivalent to an average rate of 1.4 % per annum).

At the other end of the age spectrum, young people (aged less than 15 years) accounted for 15.6 % of the EU-28’s population in 2018. This share reflects, to some degree, relatively low fertility rates recorded in most EU Member States. The shares of young people in the total populations of the ENP-East countries were generally close to the EU-28 average or above it (only Ukraine recorded a marginally lower share, at 15.5 %). The main differences (compared with the share recorded for the EU-28) were for Azerbaijan, Armenia and Georgia, where people aged less than 15 years accounted for 22.6 %, 20.2 % and 20.0 % of the total number of inhabitants.

The rate of population change is linked on the one hand to natural rates of population change (the balance between the number of births and the number of deaths) and on the other hand to migratory flows (people coming into a country or leaving it). When crude birth and death rates (the numbers of births and deaths per 1 000 inhabitants) are relatively balanced, then migratory flows may exhibit a larger influence on the overall change in population numbers as the natural change from births and deaths is close to zero (because they cancel each other out).

At 1.59 children per woman in 2017 (see Table 3) the total fertility rate of the EU-28 was considerably lower than the theoretical replacement rate for industrialised countries; an average of around 2.1 children per woman is thought to be required in order to maintain a population at a stable level — irrespective of migration.

Infant mortality rates fell rapidly in most of the ENP-East countries over the period 2007-2017 (see Table 5), in particular in Georgia and Ukraine. Only the rate in Azerbaijan was marginally higher in 2017 than it had been in 2007. Nevertheless, the latest rates for ENP-East countries generally remained at least twice as high as in the EU-28 (3.6 deaths per 1 000 live births in 2017). Belarus was the only exception, as its infant mortality rate was 3.2 deaths per 1 000 live births in 2017.

Eurostat provides a wide range of demographic data, including statistics on populations at national and regional level, as well as for various demographic events influencing the size, the structure and the specific characteristics of these populations. Eurostat collects data from EU Member States and other countries participating in its demography data collection exercise (including the ENP-East countries) concerning the population as of 1 January each year. The recommended definition is the ‘usual resident population’ and represents the number of inhabitants of a given area on 1 January of the year in question (or, in some cases, on 31 December of the previous year).

Fertility is the ability to conceive (become pregnant) and give birth to children. The total fertility rate is defined as the mean number of children who would be born to a woman during her lifetime, if she were to spend her childbearing years conforming to the age-specific fertility rates that have been measured in a given year.

Life expectancy at a certain age is the mean additional number of years that a person of that age can expect to live, if subjected throughout the rest of his or her life to the current mortality conditions; the information shown in this article relates to life expectancy at birth.

Life expectancy at birth rose rapidly during the last century due to a number of factors, including reductions in infant mortality, rising living standards, improved lifestyles and better education, as well as advances in healthcare and medicine. Statistics on population change and the structure of the population are increasingly used to support policymaking and provide an opportunity to monitor demographic behaviour within an economic, social and cultural context.

The EU’s population is ageing as consistently low birth rates and higher life expectancy transform the shape of its age pyramid. As a result, the proportion of people of working age in the EU-28 is shrinking while the relative number of those retired is expanding. This will, in turn, lead to an increased burden on those of working age to provide for the social expenditure required by the ageing population for a range of services.