Georgia’s inequality of income has fallen from 2009 to 2019 but is still greater than the EU.

Belarus and Moldova reported lower at-risk-of-poverty rates after social transfers in 2019 than were observed for the EU.

Among the European Neighbourhood Policy-East countries, Georgia, Armenia and Moldova reported higher levels of income inequality in 2019 than in the EU.

Proportion of the population at risk of poverty after transfers, 2009-2019

This article is part of an online publication; it presents information on a range of statistics covering living conditions for the European Union (EU) and six countries that together form the European Neighbourhood Policy-East (ENP-East) region: Armenia, Azerbaijan, Belarus, Georgia, Moldova and Ukraine. Data shown for Georgia exclude the regions of Abkhazia and South Ossetia over which Georgia does not exercise control and the data shown for Moldova exclude areas over which the government of the Republic of Moldova does not exercise control. The latest data for Ukraine generally exclude the illegally annexed Autonomous Republic of Crimea and the City of Sevastopol and the territories which are not under control of the Ukrainian government (see specific footnotes for precise coverage).

The article includes information relating to income distribution, the risk of poverty (before and after social transfers), as well as data relating to health and social protection expenditure. These statistics are used to observe living conditions and to formulate and monitor social policies.

Figure 1 shows that, Armenia, Georgia and, to a lesser extent, Moldova reported more pronounced levels of inequality in 2019, based on the income quintile share measure, than the three other ENP-East countries. These reported a more equal income distribution than the EU, with the lowest ratio recorded in Azerbaijan where the income of the top population quintile was 2.6 times as high as the income of the bottom population quintile. Between 2009 and 2019, the income quintile share ratio fell very strongly in Georgia and to a lesser extent in Moldova, while it increased slightly in Armenia and Azerbaijan. 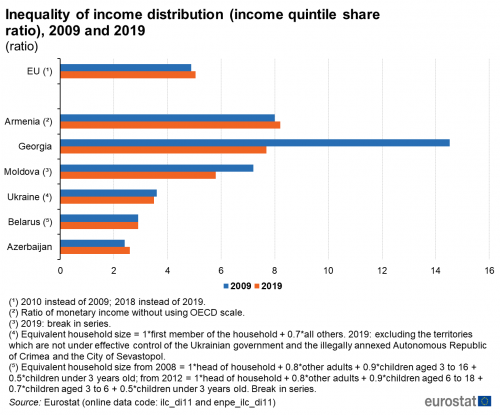 As was observed for the income quintile share ratio, Armenia, Moldova and Georgia reported greater income inequality than the EU measured by the Gini coefficient in 2019, while Belarus and Ukraine reported lower values. Belarus and the Ukraine reported near unchanged levels of income inequality, as measured by the Gini coefficient, in both years shown in Figure 2 (although there is a break in the Belarus data series). Armenia reported a rise in inequality under this measure. Georgia and Moldova reported increased equality between the years shown. 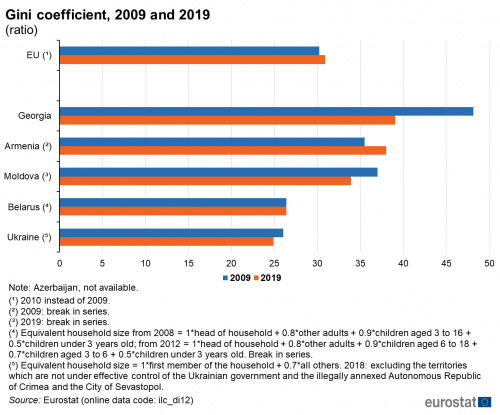 The poverty threshold shown in Table 1 is set at 60 % of the national median equivalised disposable income (after social transfers). The total net income of each household is calculated by adding together the income received by all the members of the household from all sources. For each person, the equivalised total net income is calculated as the household’s total net income divided by the equivalised household size. This is generally based on the modified OECD scale: a weight of 1.0 for the first adult, 0.5 for other persons aged 14 or over who are living in the household and 0.3 for each child aged less than 14. Note that some ENP-East countries use different scales for calculating the equivalised household size. The poverty threshold is shown as a monthly income, ranging among the ENP-East countries from the equivalent of EUR 55 in Georgia (based on consumption rather than income) to EUR 140 in Belarus in 2019.

The at-risk-of-poverty rate is the proportion of the population with an equivalised disposable income below the at-risk-of-poverty threshold. This indicator can be calculated both before and after social transfers, the difference reflecting the proportion of the population moved above the threshold as a result of receiving social transfers. Social transfers cover the social help given through benefits such as: old-age and survivors’ (typically widows’ and widowers’) pensions; unemployment, family-related, sickness and invalidity, education-related and other benefits; housing allowances; and social assistance.

As the poverty threshold is set independently for each country, at-risk-of-poverty indicators reflect low incomes in comparison with other residents of the same country. This does not necessarily imply an absolute low standard of living for all those below the threshold. Data concerning the at-risk-of-poverty rate before transfers are available for three ENP-East countries, Armenia, Belarus and Moldova, all of which reported rates below that of the EU — see Table 1. 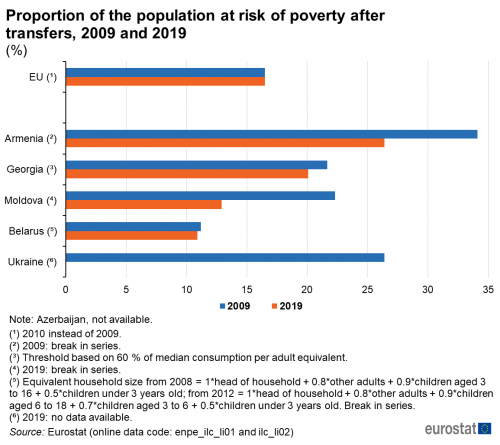 The level of expenditure on health relative to gross domestic product (GDP) was identified separately among the ENP-East countries in 2019 only by Belarus, at 4.2 %. 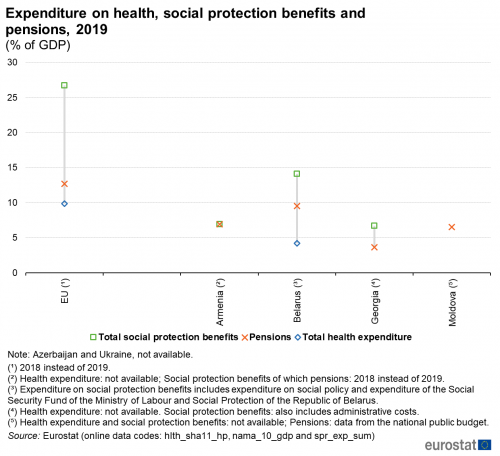 Expenditure on pensions accounted for just under half of the total expenditure on social protection benefits in the EU in 2018. This share was above 50 % in the three ENP-East countries for which data are available for a common reference year. 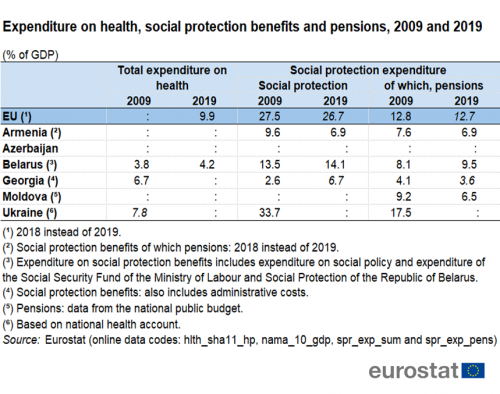 The data for ENP-East countries are supplied by and under the responsibility of the national statistical authorities of each country on a voluntary basis. The data result from an annual data collection cycle that has been established by Eurostat. These statistics are available free of charge on Eurostat’s website, together with a range of additional indicators for ENP-East countries covering most socio-economic topics.

EU statistics on income and living conditions (EU-SILC) is an instrument that aims to collect timely and comparable data on income, poverty, social inclusion and living conditions, in both monetary and non-monetary terms. The data are generally collected for private households and household members. EU-SILC provides both cross-sectional data and longitudinal data, typically over a four-year period. The legal basis for this data collection exercise is Regulation (EU) 2019/1700 of the European Parliament and of the Council of 10 October 2019 establishing a common framework for European statistics relating to persons and households, based on data at individual level collected from samples. It is supported by a series of implementing regulations and special data collection modules that relate to the collection of secondary variables on a less regular basis. Eurostat’s website provides an overview of legislation related to EU-SILC.

The European system of integrated social protection statistics (ESSPROS) is a common framework developed within the European statistical system (ESS) that has been designed to provide a coherent comparison across European countries (27 EU Member States plus Iceland, Norway, Switzerland, Serbia and Turkey) of social benefits to households and their financing, in terms of precisely defined risks or needs that refer to the ESSPROS functions: disability, sickness/health care, old-age, survivors, family/children, unemployment, housing and social exclusion. The legal basis for the data collection exercise is provided by Regulation (EC) No 458/2007 of the European Parliament and of the Council on the European system of integrated social protection statistics (ESSPROS). ESSPROS is composed of a core system that contains annual data from 1990 onwards on (gross) expenditures and receipts. In addition to the core system, one module on pension beneficiaries and one on net social benefits data are available.

Social protection systems are generally well-developed in the EU: they are designed to support people to some degree facing the risks and needs associated with unemployment, parental responsibilities, sickness/health care and invalidity/disability, the loss of a spouse or parent, old-age, housing and other forms of social exclusion.

Policies are, in 2021, under review through the European Semester process.

On 18 November 2015, the High Representative for Foreign Affairs and Security Policy and the European Commission jointly presented a review of the European Neighbourhood Policy (SWD(2015) 500 final) which set out a revised approach for the EU in relation to its eastern and southern neighbours, based on stabilising the region in political, economic, and security-related terms. In March 2020, the European Commission presented a joint policy proposal for Eastern Partnership policy beyond 2020: Reinforcing Resilience - an Eastern Partnership that delivers for all. This is intended to succeed the 2015 review of the European Neighbourhood Policy.