In 2018, Azerbaijan was the only European Neighbourhood Policy-East country to record a positive trade balance for goods.

In 2018, food, drinks and tobacco made up a higher share of imports into the European Neighbourhood Policy-East countries than into the EU.

The EU is one of the main trading partners for European Neighbourhood Policy-East countries, its share ranging from 19 % of all goods imported into Belarus in 2018 to 69 % of all goods exported from Moldova. 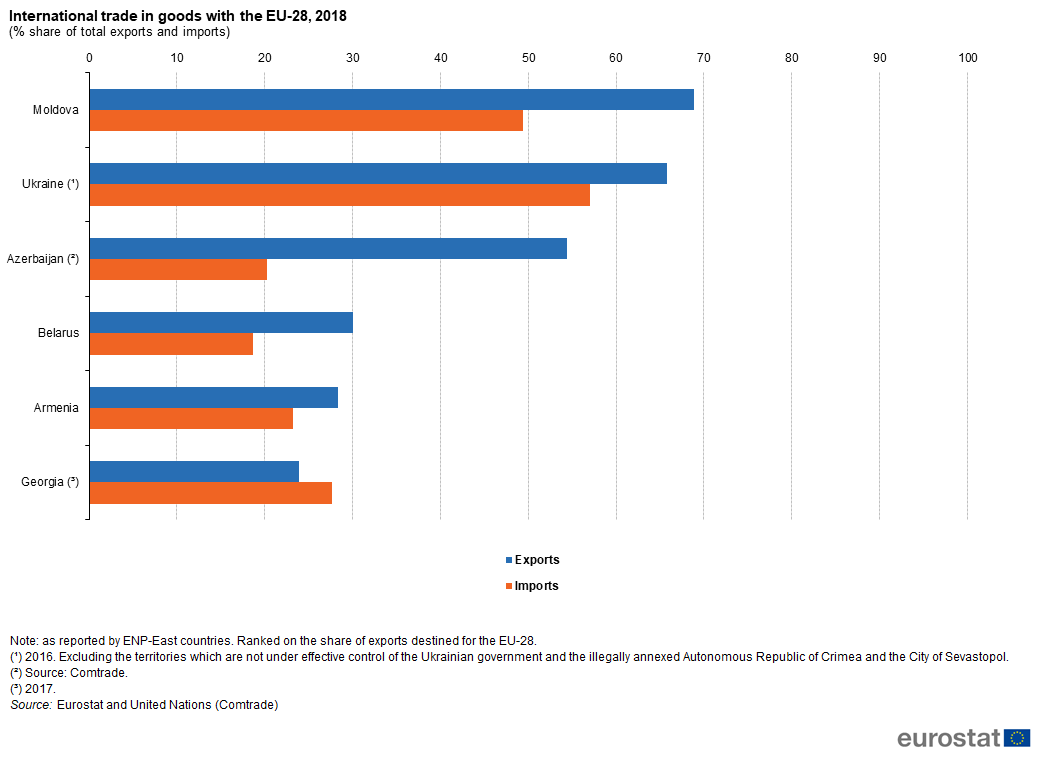 International trade in goods with the EU-28, 2018
(% share of total exports and imports)
Source: Eurostat and United Nations (Comtrade)

This article is part of an online publication and presents information relating to recent developments for international trade in goods for the European Union (EU) and in the six countries that together form the European Neighbourhood Policy-East (ENP-East) region, namely, Armenia, Azerbaijan, Belarus, Georgia, Moldova and Ukraine. Data shown for Georgia exclude the regions of Abkhazia and South Ossetia over which Georgia does not exercise control and the data shown for Moldova exclude areas over which the government of the Republic of Moldova does not exercise control. The latest data for Ukraine generally exclude the illegally annexed Autonomous Republic of Crimea and the City of Sevastopol and the territories which are not under control of the Ukrainian government (see specific footnotes for precise coverage).

When comparing developments for exports and imports of goods over the period 2008-2018, there was an expansion in the level of international trade in the EU-28 and all of the ENP-East countries (see Table 1) except in Azerbaijan for exports (2008-2017) and Ukraine both for exports and for imports (note a time series is only available for 2008-2016). It should be remembered that these values are presented in current price terms and so are affected by changes in price levels (inflation) and that the data for Ukraine are also impacted by a change in geographical coverage.

The impact of these changes in the levels of exports and imports on the trade balance for goods between 2008 and 2018 was that deficits widened somewhat in Armenia, Georgia (2008-2017) and Moldova, while the trade deficits in Belarus and Ukraine (2008-2016) narrowed and the surplus in Azerbaijan (2008-2017) narrowed.

While the absolute values of exports and imports reflect, to some degree, the size of each country (larger countries tend to export and import more goods than smaller countries in absolute terms), the relative importance of international trade within an economy can be seen from the relationship between exports/imports and gross domestic product (GDP) — see Table 2. Note that the export and import values used in this calculation are based on national accounts data, which may differ for methodological reasons from international trade statistics. Smaller economies often rely more (in relative terms) on exports and imports, in part reflecting their need to trade in a variety of goods that they do not produce on their national territory. Note that the indicator for the EU-28 is based upon extra-EU and intra-EU trade flows combined.

National accounts trade data for 2018 are available for four ENP-East countries: Armenia, Belarus, Georgia and Moldova. The highest ratio of exports of goods relative to GDP among these countries was recorded in Belarus (55.8 %) as was the highest ratio for imports of goods relative to GDP (60.3 %). By contrast, the lowest ratios were in Armenia for imports (35.6 %) and Moldova for exports (17.3 %). For Georgia and Moldova, the difference between the ratios for exports and imports were relatively large, 25.4 percentage points for Georgia and 28.7 percentage points for Moldova. For comparison, the same ratios for the EU-28 were 32.8 % for exports relative to GDP and 31.6 % for imports, a difference of 1.2 percentage points. 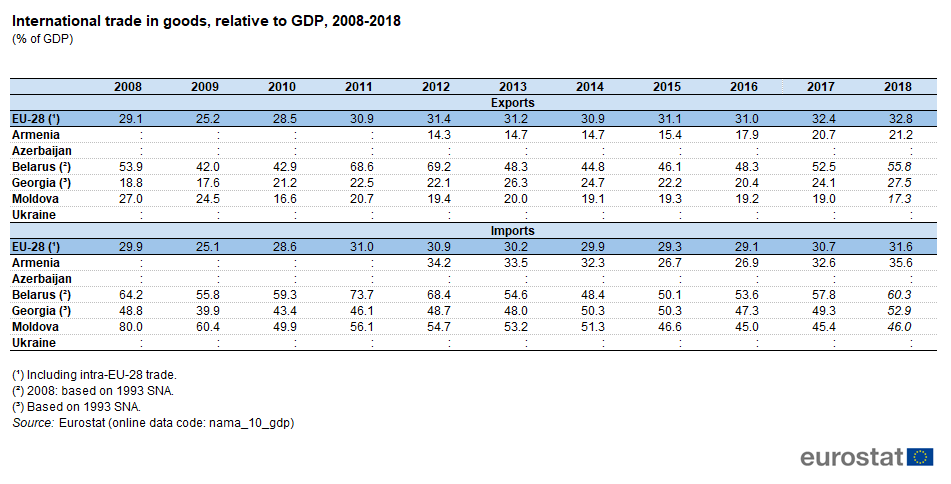 The importance of exports and imports of goods in relation to GDP was lower in 2018 than in 2008 in Moldova and higher in Georgia as well as in the EU-28. By contrast, the ratio of exports to GDP increased in Belarus over the same period while the ratio of imports to GDP fell. The shorter time series for Armenia (2012-2018) shows an increase in both ratios.

A country’s endowment with natural resources often impacts on specialisations within certain agricultural, industrial or service sectors. By contrast, countries may lack specific resources and as a result they seek to import these goods (or services). This leads to considerable differences in the types of goods that are exported and imported from individual countries.

Table 3 shows an analysis of exports by broad group of goods for 2018. The most important export product group (for goods) for the EU-28 (based on extra-EU trade with non-member countries) was that of machinery and vehicles, which accounted for 41.4 % of the EU-28’s exports, a considerably higher share than for other manufactured goods (22.4 %) or chemicals (18.1 %); none of the remaining product groups shown accounted for more than a tenth of the EU-28’s total exports of goods.

By contrast, Azerbaijan was highly specialised in exporting mineral fuels and related goods (90.5 % of its total exports of goods) in 2017, while this same product group accounted for one quarter (25.0 %) of the goods exported from Belarus in 2018. More than one tenth of exported goods from Moldova were raw materials but the share for Georgia (2017 data) was close to one fifth, while it was closer to one quarter of the total exports of goods leaving Ukraine (2016 data) and Armenia. Food, drinks and tobacco also accounted for a relatively large share of exports for most of the ENP-East countries, the only exception being Azerbaijan. This was most notably the case in Moldova and Armenia where these products accounted for close to one third of all exported goods in 2018.

A similar analysis, but for imports by broad product group, is shown in Table 4. This reveals that close to one third (31.3 %) of the EU-28’s imports of goods from non-member countries in 2018 were machinery and vehicles and a smaller share (25.0 %) were other manufactured goods, while mineral fuels and related goods accounted for one fifth (20.8 %) of the EU-28’s imports.

Among the ENP-East countries, Ukraine (2016 data) also recorded a relatively high share of its total imports of goods being made up of mineral fuels and related goods, with a share of one fifth that was therefore in line with the corresponding share for the EU-28. Belarus reported an even higher share for these goods, 28.8 % in 2018.

In keeping with the analysis for the EU-28, the other main product categories imported by most of the ENP-East countries were machinery and vehicles and other manufactured products; the exception was Armenia, where the share of food, drinks and tobacco was greater than that of machinery and vehicles. In fact, food, drinks and tobacco accounted for a higher share of goods imported into each of the ENP-East countries than they did in the EU-28, as these products represented between 8.3 % (2016 data for Ukraine) and 17.2 % (2017 data for Azerbaijan) of total imports except in Armenia (27.0 % in 2018) where it was above this range. Due to its very low imports of mineral fuels and related goods, the structure of Azerbaijan’s imports was somewhat different from that of the other ENP-East countries. In particular, machinery and vehicles accounted for a large share (33.4 %) of all goods imported in 2017.

Trade between the EU-28 and ENP-East countries

The EU-28 is a key partner for most of the ENP-East countries in terms of international trade relations for goods (see Figure 1). Indeed, the EU-28 was the origin of more than half of the goods imported by Ukraine in 2016, close to half of Moldova’s imports in 2018, and for 19-28 % of all imports into the other ENP-East countries in 2017 or 2018.

Figure 1: International trade in goods with the EU-28, 2018
(% share of total exports and imports)
Source: Eurostat and United Nations (Comtrade)

A supplementary indicator for analysing international trade data is the cover ratio, calculated as the ratio of exports to imports (expressed as a percentage): a ratio below 100 % indicates more imports than exports and therefore a trade deficit. Azerbaijan had the highest cover ratio in relation to its goods trading performance with the EU-28 in 2018, as the value of its goods exported to the EU-28 was 4.56 times as high as the value of its goods imported from the EU-28 (a cover ratio of 456 %) — see Figure 2. The cover ratios for all ENP-East countries trade with the EU-28 increased between 2013 and 2018 (2013-2017 for Georgia, 2013-2016 for Ukraine), implying stronger growth (in percentage terms) in their exports than in their imports. 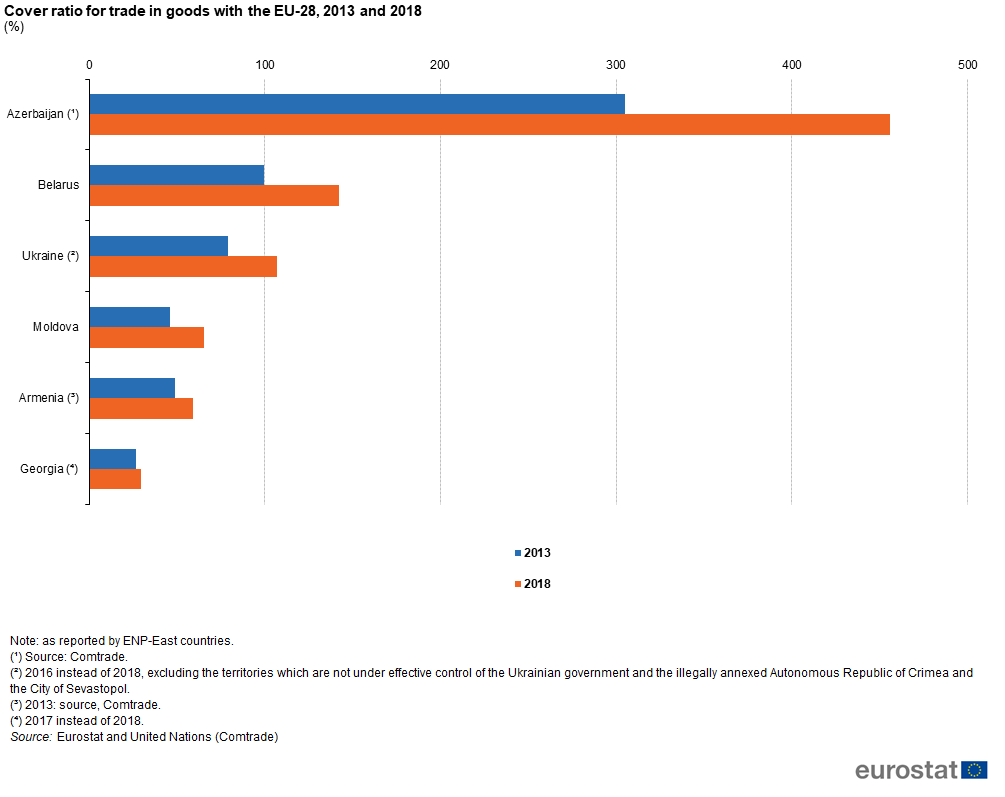 International trade statistics track the value and quantity of goods traded between countries. They are the official source of information on imports, exports and the trade balance. Traditionally, customs records are the main source of statistical data on international trade. Following the implementation of the Single Market on 1 January 1993, customs formalities between EU Member States were removed, and so a new data collection system, intrastat, was set up for intra-EU trade. In the intrastat system, intra-EU trade data are collected directly from trade operators, which send a monthly declaration to the relevant national statistical administration.

Most of the data for the EU-28 presented in this article come from Eurostat‘s Comext database; the data in Table 2 come from the national accounts databases within Eurobase.

The EU has a common international trade policy, often referred to as the common commercial policy. In other words, the EU acts as a single entity on trade issues, including issues related to the World Trade Organisation (WTO). In these cases, the European Commission negotiates trade agreements and represents the interests of the EU Member States.

The EU seeks to promote the development of free trade as an instrument for stimulating economic growth and enhancing competitiveness. International trade statistics are of prime importance for both public sector (decision makers at international, EU and national level) and private users (in particular, businesses who wish to analyse export market opportunities) as they provide valuable information on developments regarding the exchange of goods between specific geographical areas. These statistics enable the EU to monitor the development of trade ties with its ENP partners, while they are also used by the European Commission to prepare multilateral and bilateral negotiations for common trade policies.

International trade of EU, the euro area and the Member States by SITC product group (ext_lt_intertrd)