In 2019, Azerbaijan was the only net exporter of energy among the European Neighbourhood Policy-East countries, with net exports of 44 million tonnes oil equivalent.

The share of households in final energy consumption was higher in all European Neighbourhood Policy-East countries than in the EU in 2019. 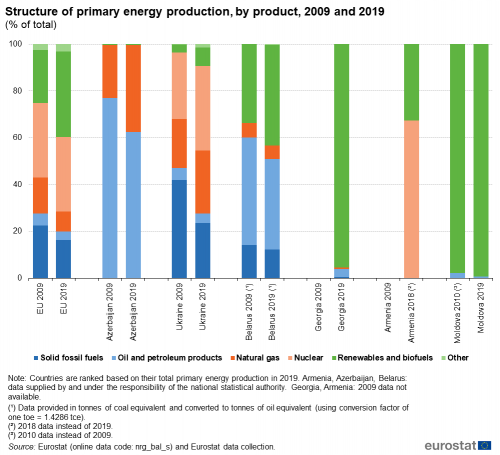 This article is part of an online publication; it presents information on a range of energy statistics for the European Union (EU) and the six countries that together form the European Neighbourhood Policy-East (ENP-East) region, namely, Armenia, Azerbaijan, Belarus, Georgia, Moldova and Ukraine. Data shown for Georgia exclude the regions of Abkhazia and South Ossetia over which Georgia does not exercise control. The data shown for Moldova exclude areas over which the government of the Republic of Moldova does not exercise control. The latest data for Ukraine generally exclude the illegally annexed Autonomous Republic of Crimea and the City of Sevastopol and the territories which are not under control of the Ukrainian government (see specific footnotes for precise coverage).

Energy commodities extracted or captured directly from natural resources are called primary energy sources, while energy commodities which are transformed from primary energy sources are called derived products. Primary energy sources cover the extraction of coal and other solid fuels; exploitation of oil and natural gas fields; production by nuclear and hydroelectric power plants; and renewables. The primary production of crude oil is defined as the quantity of fuel extracted or produced within national boundaries, including offshore production. Primary production of natural gas is defined as the quantity of dry gas, measured after purification and extraction of natural gas liquids and sulphur. Energy transformed from one form to another, such as electricity or heat generation in thermal power plants, is not considered as primary production of energy. Energy is often measured in tonnes of oil equivalent (toe). This is a normalised unit, equivalent to the approximate amount of energy that can be extracted from one tonne of crude oil, assigned a net calorific value of 41 868 kilojoules/kg, which allows the potential energy from different quantities of various energy sources to be compared.

The level of primary energy production may fluctuate considerably from one year to the next from changes in energy demand, reflecting, for example, economic fortunes and the number of heating days; from changes in energy prices, which are affected by international market supply and demand; and the weather, particularly for hydroelectric power. Developments in primary energy production may also reflect new energy sources and existing energy resources becoming depleted or being replaced.

Figure 1 shows that in Azerbaijan in 2019, oil and petroleum products, at 62.5 % and natural gas, at 37.1 %, provided almost all national primary production. Since 2009, the share of natural gas in hydrocarbon production and thus in total energy production has increased, in line with global trends. In Ukraine in 2019, nuclear energy provided 36.2 %, natural gas 26.9 % and coal and other solid fuels 23.6 % of primary production. The contribution of coal and other solid fuels fell from 42.0 % in 2009, while that of nuclear energy increased from 28.3 % and of natural gas from 21.0 %.

The structure of primary energy production in the EU is relatively varied, reflecting the availability of fossil fuel deposits and the potential for hydro power, as well as policies concerning the production of nuclear energy and energy from renewable sources. The major sources of primary energy in the EU were renewables and biofuels (36.5 %) and nuclear power (32.0 %) in 2019. Solid fuels accounted for 16.2 % of the primary energy production, while natural gas accounted for 8.5 % and oil and petroleum products for just 3.7 %.

If energy consumption exceeds primary production, the shortfall needs to be accounted for by imports of primary or derived products or by reductions in stocks. Net imports are calculated as the quantity of energy imports minus the equivalent quantity of exports. Imports represent all entries into the national territory, excluding transit quantities (notably via gas and oil pipelines); exports similarly cover all quantities exported from the national territory. 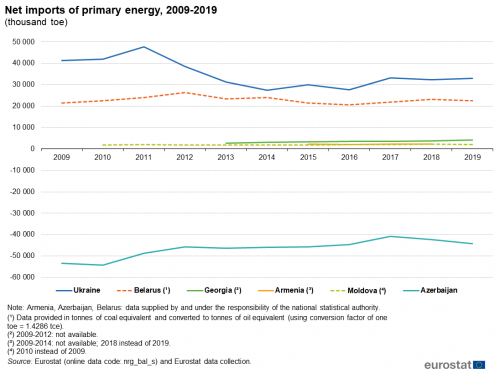 In 2019, the EU imported a net quantity of 909.1 million toe of energy, with net imports accounting for a larger share of inland consumption than primary production at 615.9 million toe.

Gross electricity production/generation refers to the process of producing electrical energy. It is the total amount of electrical energy produced by transforming other forms of energy, for example coal, nuclear or wind power. It is commonly measured in gigawatt hours (GWh). 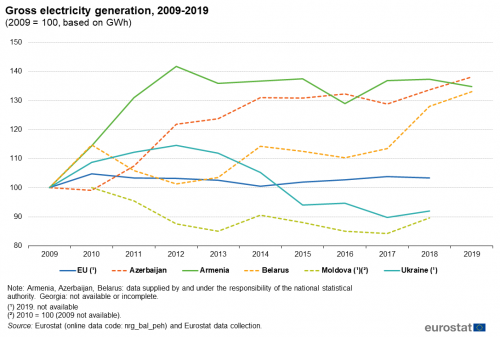 Gross inland energy consumption is the energy that a country requires to meet its internal (national) demand. It covers consumption by the energy sector itself; distribution and transformation losses; final energy consumption by end users; non-energy use by end users (such as feedstock for the petrochemical industry, lubricants); and statistical differences. It represents the total energy demand of a country or region from all sources necessary to satisfy inland consumption. 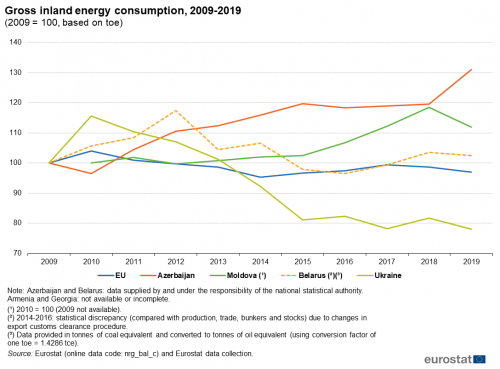 The range of shares of transport in final energy consumption is narrower than for the household and industry sectors: Georgia had the largest share at 33.6 % and Ukraine the smallest at 21.4 %. 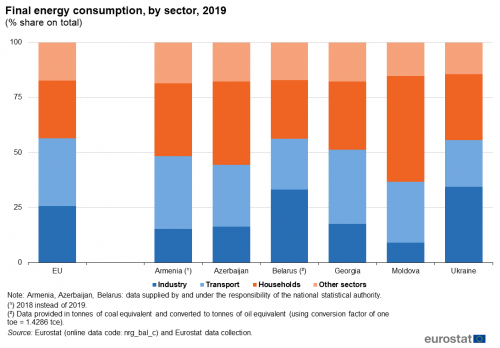 Figure 6 shows the path of greenhouse gas emissions (GHG) from 2009 to 2018, the latest data available. All ENP-East countries except for Ukraine show increases, ranging from 1.1 % in Moldova (2016 data) and 2.1 % in Belarus to 42.0 % in Georgia (2015 data). Ukraine’s decline is possibly partly due to changes in the geographical coverage of the data from 2014 onwards. 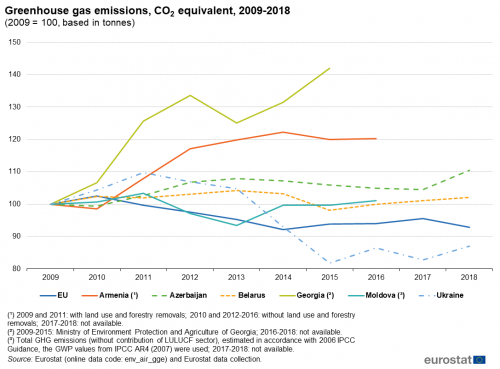 The data for ENP-East countries are supplied by and under the responsibility of the national statistical authorities of each country on a voluntary basis. The data result from an annual data collection cycle that has been established by Eurostat. These statistics are available free-of-charge on Eurostat’s website, together with a range of additional indicators for ENP-East countries, covering most socio-economic topics.

For EU statistics, the main legislation covering the collection of statistics in relation to energy quantities is Regulation (EC) No 1099/2008 of the European Parliament and of the Council of 22 October 2008 on energy statistics. Since its adoption, it has been amended many times and a consolidated version is available. A summary of the relevant legislation is also available on Eurostat's website, under 'Legislation' on the dedicated section for Energy statistics.

Energy has been a key feature on the EU’s policy agenda for a number of years, largely as a result of fluctuating energy prices; security of supply; and human induced effects of energy use on climate change, in particular, increased levels of greenhouse gas emissions. The use of renewable energy sources is seen as a key element of the EU’s energy policy and should help to improve energy security; support the achievement of a carbon neutral society; and decouple energy costs from oil prices.

Alongside this, EU policy has also supported the development of gas pipeline and electricity transmission networks across the EU, as well as of common rules to increase competition between suppliers and promote consumer choice. Energy crises have underlined the EU's need to work with its neighbours on energy security, including diversification of energy sources, routes and suppliers.

In January 2014, the European Commission put forward a 2030 climate and energy framework with the aim of encouraging private investment in infrastructure and low-carbon technologies. The key targets proposed were to have 40 % less greenhouse gases in 2030 than in 1990 and for the share of renewable energy in consumption to reach at least 27 % by 2030. Alongside the proposed targets were plans to reform the emissions trading system and to consider further amendments to the energy efficiency directive.

The EU’s 2050 long-term strategy for reducing greenhouse gas emissions was laid out in November 2018, with the aim of making Europe the world’s first climate-neutral continent by 2050 in response to the climate and environmental emergency.

In consequence, the European Commission announced the European Green Deal in December 2019. This is an action plan in support of the 2050 long-term strategy which with a further reduction in 2030 greenhouse gas emissions compared with 1990 levels; invest in research and innovation; and preserve Europe’s natural environment.

As of 2021, European Union climate legislation to implement these proposals is undergoing detailed development in the EU Council and European Parliament. This package considers the actions required across all sectors, including a reduction of 2030 greenhouse gas emissions compared with 1990 levels of at least 55 %, to be implemented through support for increased energy efficiency and renewable energy. This will enable the EU to move towards a climate-neutral economy and implement its commitments under the Paris Agreement. This process has resulted in a proposal before the European Parliament for a European Strategy for Energy System Integration.

Some ENP-East countries are confronted by energy supply issues, whereby businesses and households cannot be certain that they will have an uninterrupted supply of electricity; this may result from a lack of productive and transmission capacity: not enough generation capacity; insufficient primary energy availability; unreliable plants that have to go off-grid; inefficient transmission systems; or insecure energy supplies due to geo-political relations, for example, when importing fuels or electricity.

In March 2020, the European Commission presented a joint policy proposal for Eastern Partnership policy beyond 2020: Reinforcing Resilience - an Eastern Partnership that delivers for all. This is intended to succeed the 2015 review of the European Neighbourhood Policy (SWD(2015) 500 final). The 2020 paper notes existing joint energy efficiency initiatives in Armenia, Georgia and Ukraine. Concerning energy connectivity, the paper proposes that:

… the EU will continue to work with the partner countries to reinforce cross-border and inter-regional interconnections. The Southern Gas Corridor is nearing completion and is expected to bring the first gas from Azerbaijan to the EU in 2020. Evidence-based energy policy and collection, use and management of data will be further supported through the ‘EU4Energy’ initiative and the energy policy dialogue. The ongoing amendment of the Energy Community treaty, of which three partner countries are part, will aim at making the Energy Community more efficient and fit for a sustainable energy future. The EU will also help the partner countries to increase energy security by diversifying from oil or gas imports through investments in renewable energy and enhanced energy efficiency and by encouraging energy market integration based on sound legislation.

The Energy Community is an international organisation which brings together the European Union and its neighbours to create an integrated pan-European energy market. Its objective is to extend the EU internal energy market rules and principles on the basis of a legally binding framework. Georgia, Moldova and Ukraine are members of the Energy Community, while Armenia is an observer. Other energy initiatives concern energy efficiency of buildings; energy legislation and regulation modernisation; and strengthening international nuclear safety.

In cooperation with its ENP partners, Eurostat has the responsibility ‘to promote and implement the use of European and internationally recognised standards and methodology for the production of statistics necessary for developing and monitoring policy achievements in all policy areas’. Eurostat undertakes the task of coordinating EU efforts to increase the statistical capacity of the ENP countries. Additional information on the policy context of the ENP is provided here.