In 2020, the contribution of agriculture, forestry and fisheries to total gross value added in the ENP-East countries varied between 12.3 % in Armenia and 7.7 % in Azerbaijan, compared to 1.8 % in the EU.

In 2020, Ukraine produced almost five times as much cereals (excluding rice) for the production of grain (including seed), around three times as much potatoes and more than 13 times as much oilseeds than the other five ENP-East countries together.

Employment in agriculture, forestry and fishing, 2010 and 2020

This article is part of an online publication and provides a description of the agriculture, forestry and fishing sector in the European Union (EU) and in the six countries that together form the European Neighbourhood Policy-East (ENP-East) region, namely, Armenia, Azerbaijan, Belarus, Georgia, Moldova and Ukraine. Data shown for Georgia exclude the regions of Abkhazia and South Ossetia over which Georgia does not exercise control and the data shown for Moldova exclude areas over which the government of the Republic of Moldova does not exercise control. Since 2014, data for Ukraine generally exclude the illegally annexed Autonomous Republic of Crimea and the City of Sevastopol and the territories which are not under control of the Ukrainian government.

The article focuses on several aspects: the contribution of agriculture, forestry and fishing to the total economy (in terms of gross value added and employment), the production of cereals, livestock populations, meat production and international trade in food and live animals.

Between 2010 and 2020, the gross value added and employment shares of the agriculture, forestry and fishing sector generally declined in the ENP-East countries (subject to data availability), although there were increases in the value added shares in Ukraine and Azerbaijan and in the employment shares in Belarus. These activities continued to account for a relatively high proportion of total economic activity in the ENP-East countries. In 2020, the output of agriculture, forestry and fishing ranged from 7.7 % of total gross value added in Azerbaijan to 12.3 % in Armenia. In the other ENP-East countries, the shares were 11.0 % in Moldova, 10.8 % in Ukraine, 8.4 % in Georgia and 7.8 % in Belarus. In the EU, the share was substantially lower, accounting for 1.8 % in 2020 (see Figure 1). 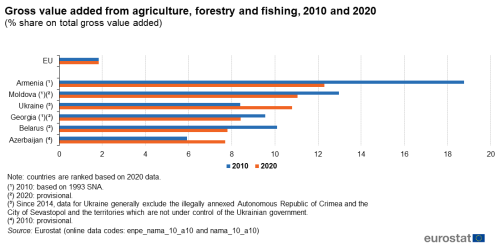 In 2020, the share of employment in the agriculture, forestry and fishing sector in the total workforce was 10.9 % in Belarus, the lowest proportion among the ENP-East countries. In Ukraine and Georgia, the proportion of the workforce employed in this sector was lower than 20 % in 2020 (14.1 % and 19.8 %, respectively). In Moldova and Armenia, the share reached 21.1 % and 22.1 %, respectively, in 2020, while more than one third of the workforce was employed in this sector in Azerbaijan (36.3 %). Thus, the proportion of people working in agriculture, forestry and fishing in Azerbaijan was nine times as high as in the EU, where 4.0 % of the working population were employed in these activities (see Figure 2). 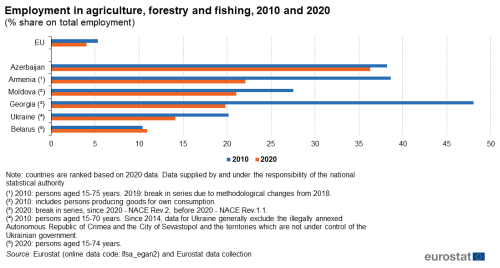 The area within each country that is used for farming varies according to climate, terrain and soil type, while the level of economic development and population density may also play a role in determining land use.

The proportion of land that is given over to agriculture was nearly 70 % of the total area of Armenia and Ukraine in 2020 (see Figure 3). This was particularly noteworthy in Ukraine which is a relatively large country in terms of its total area: indeed, some 41 million hectares of land were used for agricultural activities in Ukraine, equivalent to just above one quarter of the total utilised agricultural area of the EU. In Azerbaijan and Belarus, the proportion of land attributed to agriculture reached 55 % and 40 %, respectively. There is no data available for Georgia and Moldova. All ENP-East countries for which data is available had higher shares than the proportion observed in the EU. Within the EU, more than 38 % of the total area were used in 2020 for farming and for forest and woodland, with the remainder of the land being built-up areas (villages, towns and cities), infrastructure (such as roads or railways), scrub or waste land.

Plants need sunlight, water, healthy soils, air and heat to grow. Thus, crop production is particularly sensitive to the weather and climatic conditions at key times of the growing season, with temperature and precipitation (rainfall) of particular significance for yields and production levels. Extreme weather events, in terms of e.g. frosts, droughts or floods can also have substantial impact on production. The meteorological conditions and the utilised agricultural area (UAA) dedicated to the crops in question should be taken into consideration when comparing crop production in different years.

These two countries plus Moldova were also the smallest producers of potatoes among the ENP-East countries in 2020. All of these three countries registered drops in the production of potatoes between 2010 and 2020, especially in Moldova (-39 %). 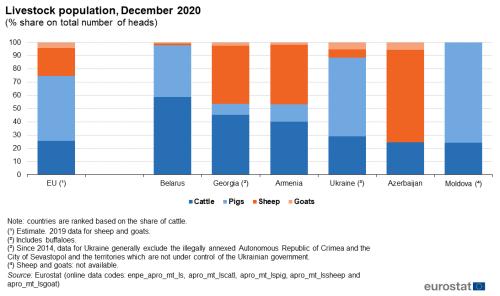 The structure of animal output — as measured by the quantity of slaughtered production — differs from the structure of the animal populations, in large part because a proportion of cattle, sheep and goats are reared for milk rather than for meat. In Armenia and Azerbaijan, cattle accounted for the highest quantity of slaughtered production in 2020, while in Moldova the largest quantity came from pigs and in Belarus, Georgia and Ukraine from poultry (see Table 2).

Compared to 2010, the levels of poultry slaughtering increased substantially in all ENP-East countries, the most noticeably for Armenia, Georgia and Belarus where it more than doubled in the period to 2020 (+133 %, +109 % and +107 %, respectively). The quantity of slaughtered pigs also increased substantially in 2020 compared to 2010 in most of the ENP-East countries. The exceptions were Azerbaijan, where the very small quantity decreased further (from 800 tonnes to 500 tonnes), and Belarus where it remained relatively stable (+1 %). Regarding cattle, the situation was more balanced. In Georgia (-25 %), Moldova and Ukraine (both -19 %), the slaughtered production of cattle decreased substantially, while in Armenia (+43 %), Azerbaijan (+27 %) and Belarus (+11 %) it showed a positive trend.

Trade in food and live animals

The value of international trade in food and live animals has grown at a rapid pace over the last decade in most of the ENP-East countries. This may in part be due to increased prices, as the values shown in Table 3 are presented in current price terms. Fluctuating prices for raw and processed foodstuffs may have a considerable impact on the trade position of a country, while climatic conditions can affect yields and determine if there is a surplus of food for export. 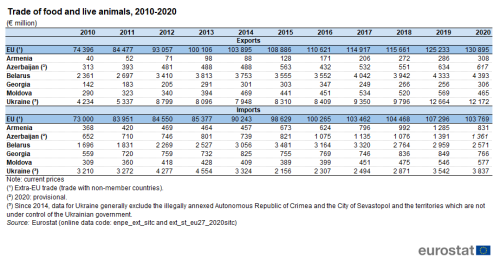 The data for ENP-East countries are supplied by and under the responsibility of the national statistical authorities of each country on a voluntary basis. The data presented in this article result from an annual data collection cycle that has been established by Eurostat. These statistics are available free-of-charge on Eurostat’s website, together with a range of different indicators covering most socio-economic areas.

Meat production is based on the activity of slaughterhouses regarding meat fit for human consumption.

The data for the EU presented in this article come from Eurostat‘s online database, including trade data from Comext.

Agriculture was one of the first sectors of the economy (following coal and steel) to receive the attention of EU policymakers, and statistics on agriculture were initially designed to monitor the main objectives of the Common agricultural policy (CAP). While the CAP remains one of the EU’s most important policies, it has undergone a widespread evaluation, which has led to a range of new objectives designed to correct imbalances and overproduction.

In December 2013, a reform of the CAP was formally adopted by the European Parliament and the Council. The main objectives of the CAP for the period 2014-2020 was to strengthen the competitiveness of the sector, promote sustainable farming and innovation, to support jobs and growth in rural areas and to move financial assistance towards the productive use of land.

In 2018, the European Commission presented legislative proposals for a new, reformed Common Agricultural Policy (CAP) beyond 2020. The reformed CAP should be key to helping the European Union achieving the objectives of the European Green Deal, and 40 % of the funds allocated to the CAP over the next 7-years programming period should be dedicated to actions contributing towards these.

The reformed CAP will help European farmers to contribute more decisively to tackling climate change, protecting the environment and moving to more sustainable and resilient food systems. It will generate economic opportunities for farmers and improve their position in the food supply chain, and better link support for farm income and rural areas to the take-up of sustainable models and practices.

For the years 2021-22, a transitional regulation (Regulation (EU) 2020/2220) is in force, extending and amending provisions set out in the preceding regulations. It will remain in force until the new framework of CAP strategic plans is implemented (due to begin on 1 January 2023).