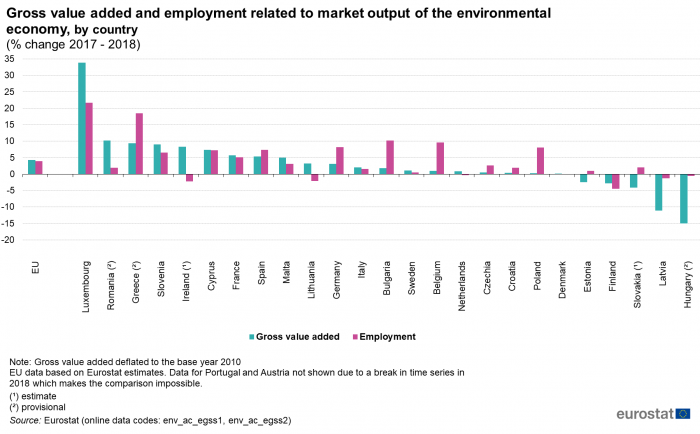 According to Eurostat estimates, the environmental economy as a whole grew by 4.4 % in 2018, generating a total gross value added (GVA) of EUR 306.8 billion (at current prices) and contributing 2.3 % to the GDP of the EU. The majority of gross value added and employment in the environmental economy is related to goods and services sold or intended to be sold on the market; the remainder stems from production for own use (ancillary or final) or for non-market purposes (as give-away for free or at non-significant prices). As EGSS data reporting is mandatory for market production only, the article focuses on market activities of the environmental economy.

Gross value added from market output grew by 4.2 % in 2018 compared to the previous year, contributing EUR 166.4 billion (at current prices) or 1.2 % to the EU GDP. The related employment grew by 3.9 % to 2.4 million full-time equivalent (FTE) jobs, while overall employment grew by 1.4 %. Growth rates vary across countries (Figure 1). Gross value added grew in 20 EU Member States in 2018 and employment in 18. For Austria and Portugal no meaningful growth rates could be calculated due to a break in series in 2018, as a result of changes to data sources and/or compilation methods.

Figure1: Gross value added and employment related to market output of the environmental economy, by country, change from 2017 to 2018
Source: Eurostat (env_ac_egss2), (env_ac_egss1)

In 2018, market output of the environmental economy contributed between 5.7 % (Finland) and 0.4 % (Malta) to the GDP of Member States (Figure 2). Large parts of the gross value added in Finland stem from forest management and renewable energy production. The environmental economy had been growing faster in 2018 than the overall national economy in eleven Member States. Most noticeably, contributions to GDP increased by 30 % in Luxembourg and 6.1 % in Romania, while they significantly decreased in Hungary (-20.5 %) and Latvia (-14.7 %). The large decrease for Hungary could be related to uncertainty in the provisional data. Most Member States generate more value added by producing goods and services for resource management than for environmental protection (Figure 3). 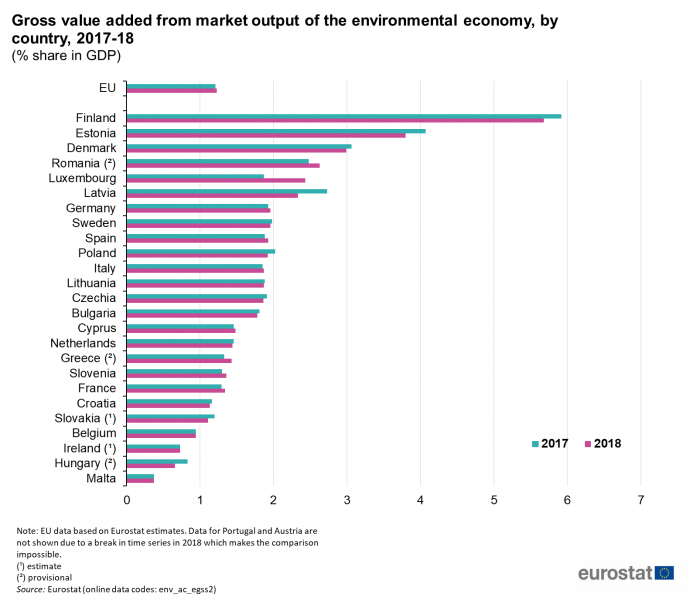 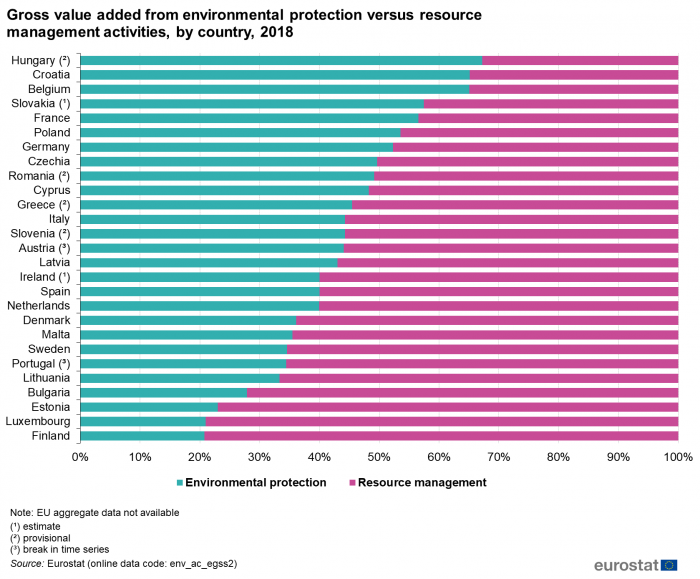 Eurostat estimates that market output of environmental goods and services has generated EU-wide 90 000 new full-time equivalent jobs in 2018. Most employment in the environmental economy is related to waste management, the production of renewable energy, and energy-efficiency measures (Figure 4). Between 2017 and 2018, job creation varied across Member States and environmental activities (Figure 5). 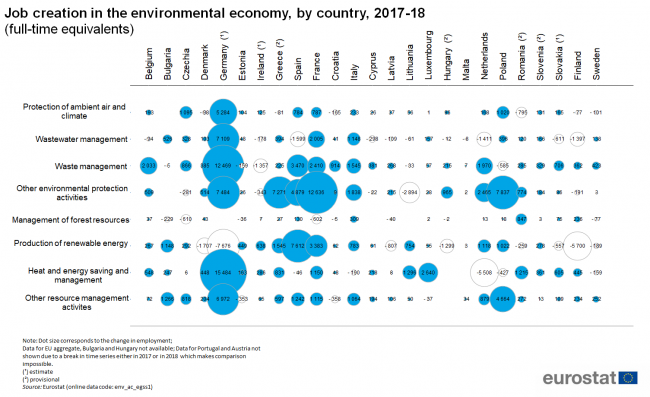 In 2018, environmental goods and services contributed to the economy-wide exports by almost 10 % in Finland, around 6 % in Romania, Austria and Denmark, but only 0.1 % in Malta and even less in Hungary (Figure 6). The composition of environmental exports varies across countries. Finland exports large amounts of wood and paper products, Romania products for protection of ambient air and climate, whereas equipment for renewable energy production accounts for a significant share of EGSS exports of Austria and Denmark. 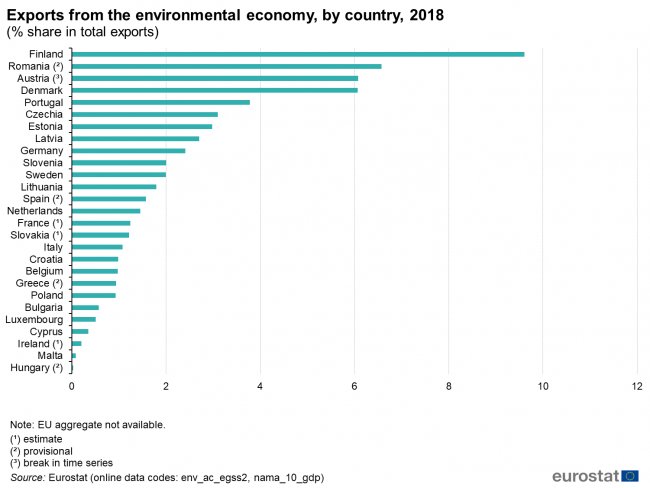 EGSS data can be used to derive sector-specific indicators. Let us consider gross value added of the renewable energy sector, comprising energy production itself but also the manufacturing of equipment such as photovoltaic cells and wind turbines, the installation of equipment, and any related research, consultancy, and management services. Calculating the ratio of gross value added (EUR) and full-time equivalent (FTE) jobs provides insight into the labour productivity of the renewable energy sector.

Figure 7 suggests considerable differences between countries and provides scope for assessing the factors behind productivity levels, among them income, energy prices, subsidies for renewable energy, composition of the renewable energy mix, and the scope of activities covered. More detailed data for individual NACE sections suggest, for example, that large parts of value added in many countries are generated by energy production itself (i.e. NACE D35). By contrast, more than half of the value added of the renewable energy sector in Denmark, Croatia and Austria is generated by manufacturing of energy technologies, while in Ireland and France over one fifth of the value added is generated by the construction industry. 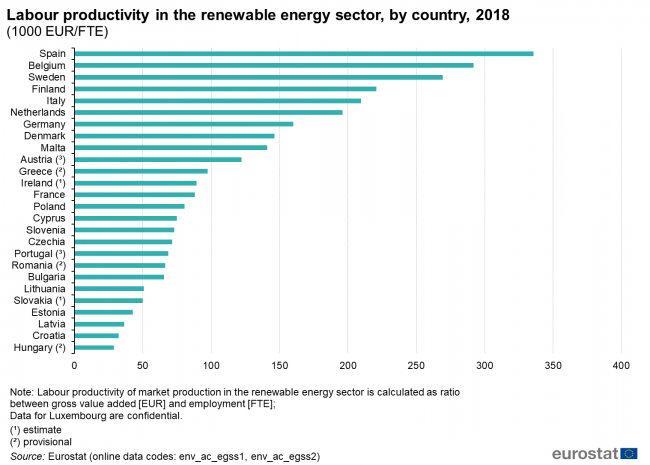 Output, gross value added, employment, and exports are reported in the EGSS accounts as totals and disaggregated by (i) twenty-one economic sections according to NACE Rev. 2 and (ii) two groups of activities, that is, environmental protection and resource management.

See the revised CEPA and CReMA explanatory notes and the EGSS handbook for further detail.

This article presents the most recent data on gross value added, employment, and exports related to market production in the environmental economy. Eurostat collected the data in 2020 as part of the fourth mandatory reporting round for Member States.

Data for the environmental economy are recorded according to the principles of national accounting, following the guidance in the EGSS Handbook and the EGSS Practical Guide. As data reporting is mandatory since 2017 only, not all countries cover relevant goods and services in a comprehensive manner yet. Pertinent cases are flagged as estimate, provisional or break in time series. To account for the resulting uncertainty, EU aggregates are not yet calculated from the data reported by Member States. Instead, Eurostat estimates aggregates by combining information from national accounts, environmental protection expenditure accounts, structural business statistics, industrial commodity statistics, labour statistics, international trade statistics, agriculture statistics and energy statistics.

The data presented in this article refer to market production and are not directly comparable to those presented in Eurostat's article on Environmental economy - statistics on employment and growth, which cover total production consisting of market, non-market, and ancillary output as well as output for own final use within enterprises.

As methods and data sources for compiling EGSS accounts mature, accuracy and completeness of data will improve alongside. Data validation and the development of methodological guidance together with Member States will remain an important part of Eurostat's efforts to increase the coherence and quality of EGSS data in the future.