The number of citizens of Albania receiving citizenship in the EU in 2020 was 146 % higher than in 2010, while for citizens of Turkey the number declined by 49 %.

Persons acquiring citizenship of an EU Member State, 2010 and 2020

This article is part of an online publication for the European Union (EU) candidate countries and potential candidates, in other words the enlargement countries. Montenegro, North Macedonia, Albania, Serbia and Turkey currently have candidate status, while Bosnia and Herzegovina as well as Kosovo* are potential candidates. 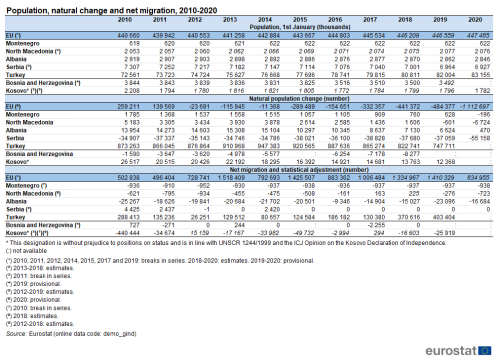 Statistics are compiled on the number of new residents in the Member States who have been issued with their first residence permit during a calendar year. In general, this figure excludes renewals of existing permits, but a residence permit is also considered to be a first permit if the time gap between the expiry of an old permit and the start of validity of the new permit issued for the same reason is at least six months. This concept represents the ‘flow’ of persons establishing residency. 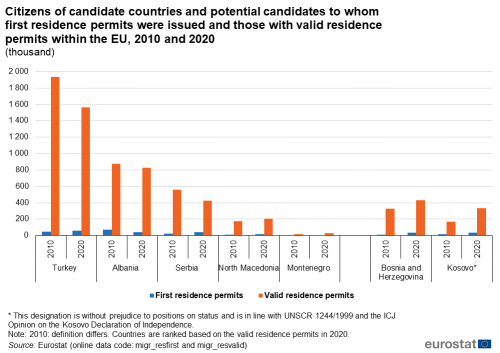 Among the citizens of candidate countries and potential candidates issued with first residence permits in 2020, 42 % were for family reasons, down from 53 % in 2010; 29 % were for employment, up from 28 % in 2010; 5 % for education, down from 8 % in 2010; and 24 % for other reasons, having been 11 % in 2010. These include international protection, residence without the right to work, for example pensioners, or people in the intermediate stages of a regularisation process. Figure 2 presents the corresponding numbers by country. 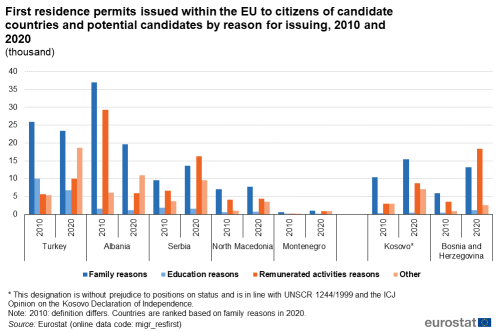 Figure 2: First residence permits issued within the EU to citizens of candidate countries and potential candidates by reason for issuing, 2010 and 2020
(thousand)
Source: Eurostat (migr_resfirst)

The reasons for which first permits were issued in 2020 varied among the candidate countries and potential candidates. The most common reason was family for citizens of Albania, accounting for 52 % of the total; those of Kosovo, 49 %; North Macedonia, 47 %; Turkey, 40 %; and Montenegro, 36 %. More people were issued with first permits for employment reasons than for other specified reasons for citizens of Bosnia and Herzegovina, 52 % of the total and for Serbians 40 %.

Table 2 shows the numbers of first residence permits issued to citizens of the candidate countries and potential candidates by the EU Member States issuing the largest number of these permits in 2020.

Table 3 shows the numbers of citizens of the candidate countries and potential candidates holding residence permits by the EU Member States issuing the largest number of these permits in 2020.

Citizenship of an EU Member State brings new rights and opportunities, such as the rights to move, live and work freely within the EU. 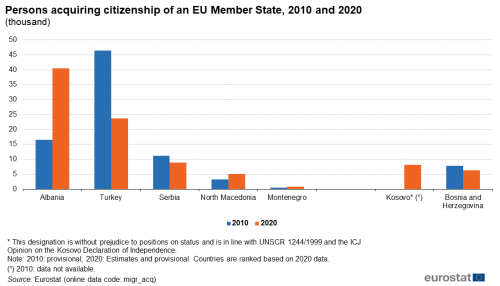 Asylum applicants and first instance decisions in the EU

This section describes recent developments in relation to the number of asylum applicants in the EU from citizens of candidate countries and potential candidates as well as decisions on applications for international protection.

Asylum is a form of international protection given by a state on its territory. It is granted to a person who is unable to seek protection in his/her country of citizenship and/or residence, in particular for fear of being persecuted for reasons of race, religion, nationality, membership of a particular social group, or political opinion.

Data for each Member State refer to the number of persons applying for asylum for the first time in that Member State. The EU total is calculated as the sum of data for the EU Member States. Figure 4 shows first time asylum applicants to EU countries by citizens of candidate countries and potential candidates for the years 2014 (first year for which data is available) and 2021. The number of first-time asylum applicants in the EU in 2021 who were citizens of candidate countries and potential candidates was 37.6 thousand. This was 57 % lower than in 2014.

Comparing the situation in 2021 with that in 2014, the number of first time asylum applicants in the EU from Kosovo fell by 95 %, from North Macedonia by 90 %, from Montenegro by 83 % and from Bosnia and Herzegovina by 80 %. First time asylum applications by citizens from Serbia fell by 55 % and from those of Albania by 38 %. In contrast, the number of applicants from citizens of Turkey was almost multiplied by 5 (+393 %) compared with 2014.

Of the citizens of candidate countries and potential candidates who were first time asylum applicants in the EU in 2021, 54 % were Turkish citizens and 24 % were Albanians. The share for citizens of Serbia was 8 %; North Macedonia, 5 %; Kosovo and Bosnia and Herzegovina, 4 % each; and Montenegro less than 1 %. 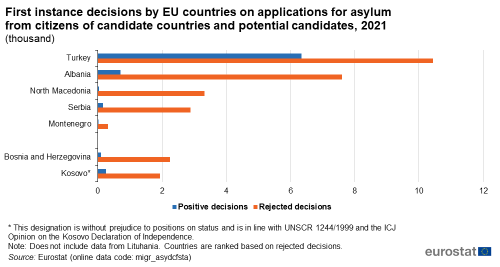 Eurostat provides a wide range of demographic data, including statistics on populations at national and regional level, as well as for various demographic factors influencing the size, the structure and the specific characteristics of these populations. The population data presented in this article were collected from enlargement countries alongside Eurostat’s regular collection of population data from EU Member States and EFTA countries. The data on residence permits, the acquisition of citizenship, asylum and first instance decisions form part of a regular collection of data from Member States and EFTA countries.

Eurostat collects data in its demography data collection exercise in relation to the population as of 1 January each year. The recommended definition is the ‘usual resident population’ and represents the number of inhabitants of a given area on 1 January of the year in question (or, in some cases, on 31 December of the previous year).

Data related to residence permits are generally based on administrative sources. Commission Regulation (EU) No 216/2010 on Community statistics on migration and international protection, as regards the definitions of categories of the reasons for the residence permits provides the list and definition of reasons for permits being issued.

It should be noted that certain methodological aspects are not fully harmonised between the reporting countries due to different legal or information technology systems. See a general article on first residence permits for more information.

Since 2008 data on acquisitions of citizenship have been collected by Eurostat under the provisions of Regulation (EC) No 862/2007 on migration statistics. Citizenship is the particular legal bond between an individual and his or her State, acquired by birth or naturalisation, whether by declaration, choice, marriage or other means according to the national legislation. International law does not provide detailed rules, but it recognises the competence of every state in cases like: spouses of citizens, minors adopted by citizens, descendants of citizens born abroad returning to the country of origin of their ancestors. Countries differ considerably in terms of the conditions to be fulfilled to acquire citizenship: in general, a period of legally registered residence is required, combined with other factors such as evidence of social and economic integration and knowledge of national languages. Different conditions may apply for persons who were born in the country concerned (jus soli), or who have parents or other relatives with that country’s citizenship (jus sanguinis). Detailed information on the different modes of acquisition of citizenship in force in different countries can be found at the Global Citizenship Observatory (GLOBALCIT).

Equally, data related to asylum have also been provided to Eurostat since 2008, again under the provisions of Regulation (EC) 862/2007. Data are provided with a monthly frequency for asylum application statistics and a quarterly frequency for first instance decisions; data are also collected with an annual frequency for final decisions based on appeal or review, resettlement and unaccompanied minors. These statistics are based on administrative sources and are supplied to Eurostat by statistical authorities, home office ministries/ministries of the interior or related immigration agencies.

First instance decisions are decisions granted by the respective authority acting as a first instance of the administrative/judicial asylum procedure in the receiving country.

The United Nations publishes estimates on migration which can be found on their website.

Statistics on population change and the structure of population are increasingly used to support policymaking and provide an opportunity to monitor demographic behaviour within an economic, social and cultural context. Indeed, the EU’s population is ageing as consistently low birth rates and higher life expectancy transform the shape of its age pyramid.

Migration policies within the EU are built upon solidarity and responsibility, taking account of the contribution that immigrants make to the EU’s economic development and performance. Within the European Commission, the Directorate-General for Migration and Home Affairs is responsible for immigration policy. EU policy measures on legal immigration cover the conditions of entry and residence for certain categories of immigrants, such as highly qualified workers subject to the ‘EU Blue Card Directive’, students and researchers, as well as family reunification and long-term residents: see New Pact on Migration and Asylum for more information.

In May 2013, the European Commission published the EU Citizenship Report 2013 (COM(2013) 269 final). The report noted that EU citizenship brings new rights and opportunities. Moving and living freely within the EU is the right most closely associated with EU citizenship. Given modern technology and the fact that it is now easier to travel, freedom of movement allows EU citizens to expand their horizons beyond national borders, to leave their country for shorter or longer periods, to come and go between EU Member States to work, study and train, to travel for business or for leisure, or to shop across borders. Free movement potentially increases social and cultural interactions within the EU and closer bonds between EU citizens. In addition, it may generate mutual economic benefits for businesses and consumers.

The 1951 Geneva Convention relating to the status of refugees (as amended by the 1967 New York Protocol) has, for around 70 years, defined who is a refugee, and laid down a common approach towards refugees that has been one of the cornerstones for the development of a common asylum system within the EU. Since 1999, the EU has worked towards creating a common European asylum regime in accordance with the Geneva Convention and other applicable international instruments. More information is available in an article on asylum statistics.

Information concerning the current statistical legislation on population, migration and asylum statistics can be found here: