Income distribution was less unequal in 2020 in Serbia, Montenegro and North Macedonia (2019 data) than it had been in 2010, as measured by the income quintile share ratio.

On the basis of the most recent data available, the share of the population at risk of poverty after social transfers in the candidate countries and potential candidates ranged from 21.6 % in North Macedonia to 27.9 % in Kosovo. In the EU in 2020 it was 17.1 %.

[[File:CPC22_Proportion of the population at risk of poverty after transfers 2020.xlsx]]

Proportion of the population at risk of poverty after transfers, 2020

This article is part of an online publication and provides information on a range of statistics related to living conditions in the European Union (EU) enlargement countries, in other words the candidate countries and potential candidates. Montenegro, North Macedonia, Albania, Serbia and Turkey currently have candidate country status, while Bosnia and Herzegovina as well as Kosovo* are potential candidates.

The article includes information relating to income distribution, the risk of poverty (before and after social transfers), the contribution of social transfers to median equivalised disposable income, the proportion of persons who are living in households with very low work intensity, as well as health and social protection expenditure. 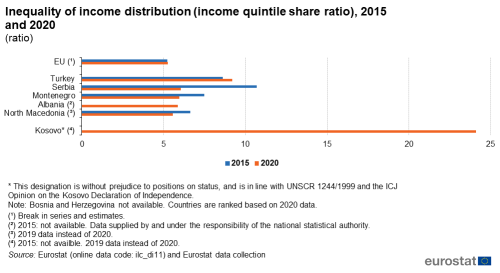 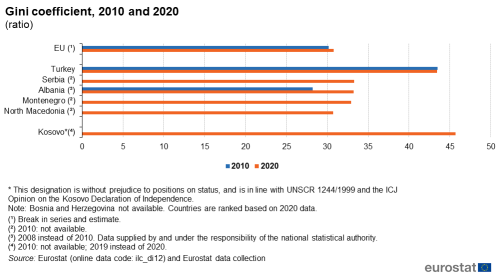 The poverty threshold is shown as a monthly income, ranging in 2020 among the candidate countries and potential candidates for which data are available from the equivalent of EUR 103 in Kosovo (2018 data) to EUR 196 in Montenegro. No data was available for Bosnia and Herzegovina.

The at-risk-of-poverty rate is the proportion of the population with an equivalised disposable income below the poverty threshold. This indicator can be calculated either before social transfers or after social transfers. The difference between the two reflects the proportion of the population moved above the threshold as a result of receiving social transfers. Social transfers cover the social help given through benefits such as: old-age and survivors’ (widows’ and widowers’) pensions; unemployment, family-related, sickness and invalidity, education-related and other benefits; housing allowances; and social assistance.

The analysis of the contribution of social transfers to median equivalised disposable income can illustrate the impact and redistributive effects of welfare policies. These transfers cover assistance that is given by central, state or local institutional units and include, among others, pensions, unemployment benefits, sickness and invalidity benefits, housing allowances, social assistance and tax rebates.

Figure 3 shows the overall impact of social transfers. The data distinguish transfers for pensions from other transfers such as social security benefits and social assistance, which have the aim of alleviating or reducing the risk of poverty. The statistics are reported in terms of purchasing power standards (PPS) per inhabitant. This measure normalises the level of transfers against median equivalised disposable income, permitting comparisons between countries with different standards of living. 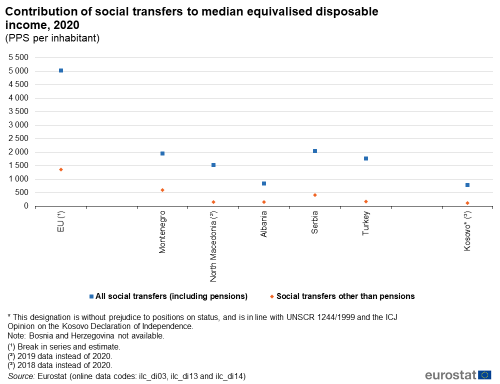 Persons living in households with low work intensity are those aged 0-59 living in households where the adults aged 18-59, excluding students, have worked 20 % or less of their total work potential during the past year. The work intensity of a household is the ratio of the total number of months that all working-age household members have worked during the income reference year to the total number of months the same household members could theoretically have worked in the same period. The indicator is based on the EU statistics on income and living conditions (EU-SILC). The two indicators presented in Figure 4 concern different subpopulations: people aged 0-17 years, who are considered as dependent children; and those of working age, defined as 18-59 years. 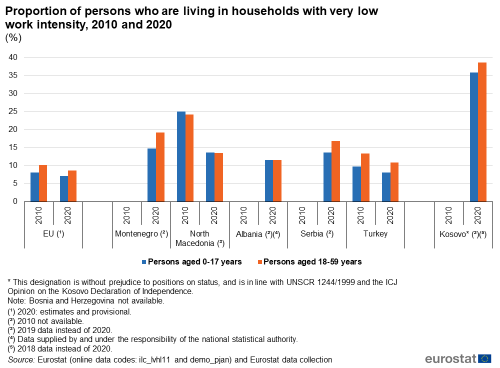 Figure 4: Proportion of persons who are living in households with very low work intensity, 2010 and 2020
(%)
Source: Eurostat (ilc_lvhl11) and (demo_pjan) and Eurostat data collection

Total expenditure on health concerns total current expenditure on health and investment, regardless of the source of funds. It covers: curative and rehabilitative care (in-patient care, day cases, out-patient and home care); services of long-term nursing care (in-patient, day cases and home care); ancillary services to health care; medical goods dispensed to out-patients; services of prevention and public health; health administration and health insurance. The level of expenditure on health relative to gross domestic product (GDP) is shown in Figure 5 and Table 2. The values recorded vary greatly, from 4.0 % of GDP in Kosovo, through 4.7 % in Turkey to 8.6 % in Serbia and 9.1 % in Bosnia and Herzegovina (2018 data). 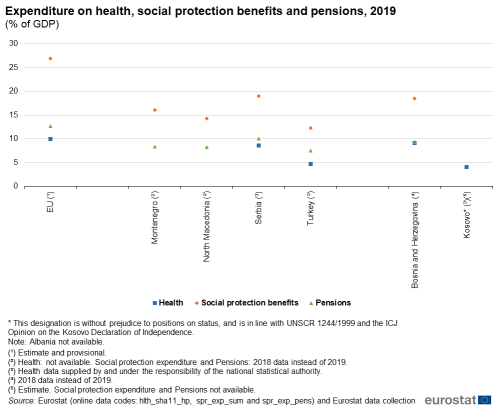 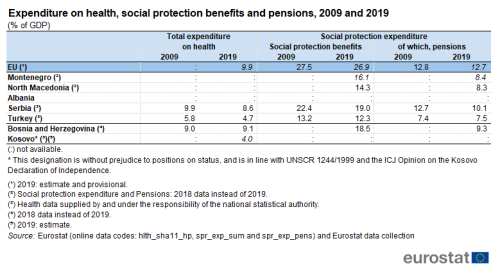 Data for some of the enlargement countries (Albania and Turkey) are collected for a wide range of indicators each year through a questionnaire that is sent by Eurostat to candidate countries or potential candidates. A network of contacts has been established for updating these questionnaires, generally within the national statistical offices, but potentially including representatives of other data-producing organisations (for example, central banks or government ministries).

EU-SILC is an instrument that aims to collect timely and comparable data on income, poverty, social inclusion and living conditions, in both monetary and non-monetary terms. The data are generally collected for private households and household members. EU-SILC provides both cross-sectional data and longitudinal data (typically over a four-year period).

The legal basis for this data collection exercise is Regulation (EU) 2019/1700 of the European Parliament and of the Council of 10 October 2019 establishing a common framework for European statistics relating to persons and households, based on data at individual level collected from samples (Integrated European Social Statistics – IESS).

Information concerning the current statistical legislation on income and living conditions can be found here.

The European system of integrated social protection statistics (ESSPROS) is a common framework developed within the European Statistical System (ESS) that has been designed to provide a coherent comparison across European countries (27 EU Member States plus the United Kingdom, Iceland, Norway, Switzerland, Montenegro, North Macedonia, Serbia, Turkey as well as Bosnia and Herzegovina) of social benefits to households and their financing, in terms of precisely defined risks or needs that refer to the ESSPROS functions: disability, sickness/health care, old-age, survivors, family/children, unemployment, housing and social exclusion. The legal basis for the data collection exercise is provided by Regulation (EC) No 458/2007 of the European Parliament and of the Council on the European system of integrated social protection statistics (ESSPROS). ESSPROS is composed of a core system that contains annual data from 1990 onwards on (gross) expenditures and receipts. In addition to the core system, one module on pension beneficiaries and one on net social benefits data are available.

Social protection systems are generally well-developed in the EU: they are designed to protect people (to some degree) against the risks and needs associated with unemployment, parental responsibilities, sickness/health care and invalidity/disability, the loss of a spouse or parent, old-age, housing and other forms of social exclusion.

Through the Social OMC – and in collaboration with the Social Protection Committee – the EU provides a framework for national strategy development for social protection and social investment, as well as for coordinating policies between EU countries on issues relating to:

Eurostat has the responsibility to ensure that statistical production of the enlargement countries complies with the EU acquis in the field of statistics. To do so, Eurostat supports the national statistical offices and other producers of official statistics through a range of initiatives, such as pilot surveys, training courses, traineeships, study visits, workshops and seminars, and participation in meetings within the European Statistical System. The ultimate goal is the provision of harmonised, high-quality data that conforms to European and international standards.