Highlights
Tweet
Production of primary energy in the EU was 9.2 % lower in 2018 than it had been a decade earlier.
Tweet
Russia was the main supplier to the EU of natural gas, crude oil and hard coal in 2018.

The dependency of the European Union (EU) on energy imports, particularly of oil and natural gas, forms the backdrop for policy concerns relating to the security of energy supplies. This article looks at the production of primary energy within the EU and, as a result of the shortfall between production and consumption, the EU’s increasing dependency on energy imports from non-member countries. Indeed, more than half (58.2 %) of the EU’s gross available energy in 2018 came from imported sources.

Production of primary energy decreased between 2008 and 2018

Production of primary energy in the European Union (EU) totalled 635 million tonnes of oil equivalent (Mtoe) in 2018 — see Table 1. This was only 1 % lower than a year before and continued the generally downward development observed in recent years, with a few exceptions in 2010 when production rebounded following a relatively strong fall in energy production in 2009 that coincided with the global financial and economic crisis, and then in 2012-2013 when a slight increase occurred again . When viewed over a longer period, the production of primary energy in the EU was 9.2 % lower in 2018 than it had been a decade earlier. The general downward development of EU primary energy production may, at least in part, be attributed to supplies of raw materials becoming exhausted and/or producers considering the exploitation of limited resources uneconomical.

In absolute terms, 14 of the 27 EU Member States recorded an expansion in their level of primary energy production in the period 2008 to 2018. The largest expansion in the production was registered in Italy (an increase of 4.5 Mtoe), followed by Spain (4.4 Mtoe), Sweden (4.0 Mtoe), Ireland (3.4 Mtoe), and Finland (3.2 Mtoe). By contrast, the production of primary energy in the Netherlands fell by as much as 31.2 Mtoe, while Germany (-23.4 Mtoe) and Denmark (-12.7 Mtoe) also reported contractions in excess of 10 Mtoe. 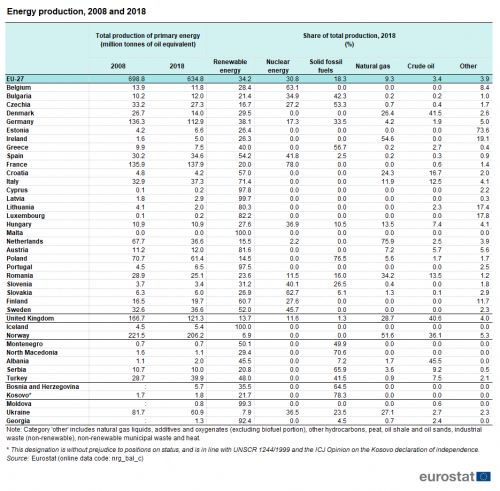 Primary energy production in the EU in 2018 was spread across a range of different energy sources, the most important of which in terms of the size of its contribution were the renewable energy sources, with more than one third (34.2 %) of the EU’s total production.

The share for solid fossil fuels (18.3 %, largely coal) was just below one fifth and the share for natural gas was close to one tenth (9.3 %). Crude oil (3.4 %) was the only other major source of primary energy production (see Figure 1). 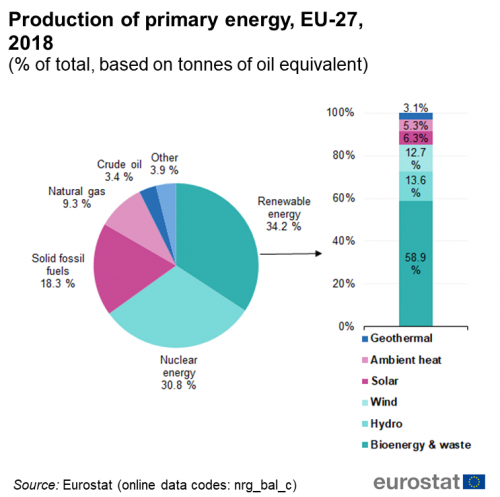 The growth of EU primary production from renewable energy sources exceeded that of all the other energy types; this growth was relatively uniform during the period covering 2008-2018, with a small dip in production in 2011 (see Figure 2). Over this period the production from renewables increased by 49.2 %, replacing, to some degree, the production of other sources of energy. By contrast, the production levels for the other sources fell, the largest reductions being recorded for natural gas (-46.4 %), crude oil (-35.3 %) and solid fossil fuels (-27.9 %), with a more modest fall of 14.4 % for nuclear energy. 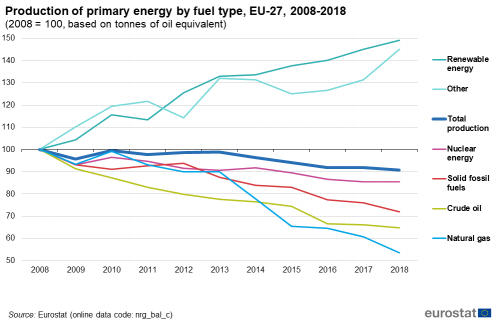 The downturn in the primary production of hard coal, lignite, crude oil, natural gas and more recently nuclear energy has led to a situation where the EU has become increasingly reliant on imports of primary energy commodities and also secondary derived products (e.g. gas/diesel oil) in order to satisfy its demand, although this situation stabilised in the aftermath of the global financial and economic crisis. The EU’s imports of energy exceeded exports by 886 Mtoe in 2018. The largest net importers of energy in absolute numbers were Germany, Italy, France and Spain. In 2008, Denmark had been the only net exporter of energy among the EU Member States, but in 2013 Danish energy imports exceeded exports and the trend was confirmed in the following five years until 2018. Hence, since 2013 all 27 Member States of the EU are net importers of energy. Relative to population size, the largest net importers in 2018 were Luxembourg, Malta and Belgium. 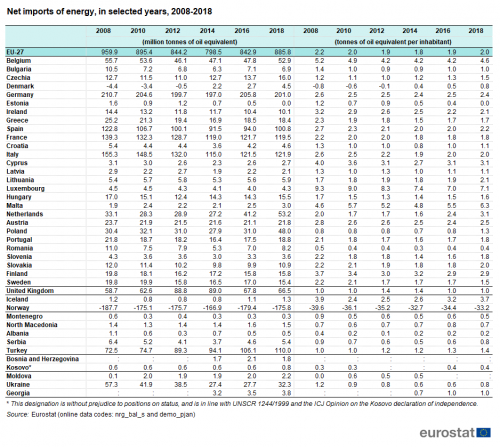 The main origins of EU energy imports have changed somewhat in recent years. Russia has maintained though throughout the whole period 2008-2018 its position as the leading supplier to the EU of the main primary energy commodities – hard coal, crude oil and natural gas (see Table 3). 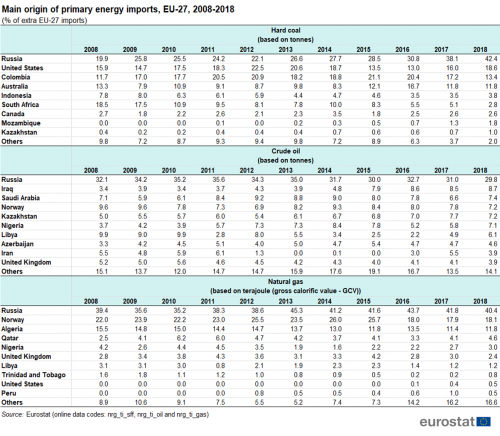 The security of the EU’s primary energy supplies may be threatened if a high proportion of imports are concentrated among relatively few partners. Almost three quarters (70.3 %) of the EU’s imports of natural gas in 2018 came from Russia, Norway and Algeria. A similar analysis shows that close to three quarters (74.3 %) of EU hard coal imports originated from Russia, the United States and Colombia, while imports of crude oil were less concentrated among the principal suppliers, as Russia, Iraq and Saudi Arabia accounted for roughly the half (45.9 %) of the EU’s imports.

More than half of EU energy needs are covered by imports

EU dependency on energy imports didn’t change much over the last decade, from 58.4 % of gross available energy in 2008 to 58.2 % in 2018 (see Figure 3). During the presented period, the EU’s net imports of energy have been greater than its primary production; in other words, more than half of the EU’s gross available energy was supplied by net imports and the dependency rate exceeded 50.0 %. 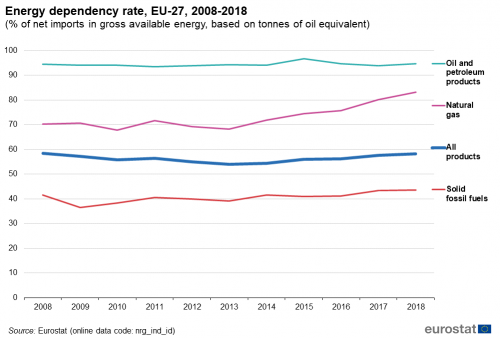 An analysis of developments between 2008 and 2018 reveals that Denmark, the Netherlands, Lithuania and Poland became increasingly dependent upon energy imports to satisfy their gross available energy; these patterns can be largely associated with a downturn in primary energy production (linked to the supplies of raw materials becoming exhausted). There was also increasing dependency, although less marked, in Czechia, Germany and Belgium. All of the remaining EU Member States recorded a fall in their energy dependency rates between 2008 and 2018, the most rapid change being registered in Estonia, where the rate fell from 27.5 % to 0.7 % (-26.8 percentage points); rates also fell considerably in Ireland (-22.3 percentage points), Bulgaria (-15.8 percentage points) and Latvia (-14.5 percentage points) driven by a combination of energy efficiency gains and/or a switch in the energy mix to promote primary production from renewable sources. 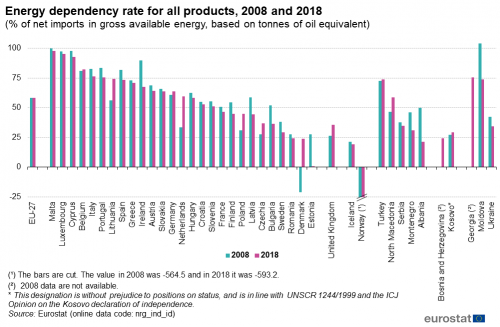 Figure 4: Energy dependency rate for all products, 2008 and 2018
(% of net imports in gross available energy, based on tonnes of oil equivalent)
Source: Eurostat (nrg_ind_id)

The heat produced in a reactor as a result of nuclear fission is regarded as primary production of nuclear heat, alternatively referred to as nuclear energy. It is calculated either on the basis of the actual heat produced or on the basis of reported gross electricity generation and the thermal efficiency of the nuclear plant. Primary production of coal and lignite consists of quantities of fuels extracted or produced, calculated after any operation for the removal of inert matter.

Transformation of energy from one form to another, such as electricity or heat generation from thermal power plants, or coke production from coke ovens is not considered as primary production.

More than half of the EU’s energy comes from countries outside the EU and this proportion has been generally rising over recent decades (although there is some evidence to suggest that the dependency rate has stabilised in recent years). Much of the energy imported into the EU comes from Russia, whose disputes with transit countries have threatened to disrupt supplies in recent years. Concerns about the security of supply from Russia were further heightened by the conflict in Ukraine. New measures for oil and gas markets were designed to ensure that all parties take effective action to prevent and mitigate the consequences of potential disruptions to supplies, while also creating mechanisms for EU Member States to work together to deal effectively with any major oil or gas disruptions which might arise; a coordination mechanism was set up so that Member States can react uniformly and immediately in emergency cases.

In November 2010, an initiative titled Energy 2020 a strategy for competitive, sustainable and secure energy (COM(2010) 639 final) was adopted by the European Commission. This strategy defines energy priorities for a period of 10 years and puts forward actions that may be taken in order to tackle a variety of challenges, including: achieving a market with competitive prices and secure supplies; boosting technological leadership; and effectively negotiating with international partners (for example, to pursue good relations with the EU’s external suppliers of energy and energy transit countries). This work has been further developed through a 2030 energy strategy which provides a policy framework for climate and energy policy to 2030 and a 2050 energy roadmap which set a long-term goal of reducing the EU’s greenhouse gas emissions by 80-95 % by 2050.

Through the Energy Community (established in October 2005), the EU also works to integrate neighbouring countries into its internal energy market. A broad mix of energy sources and diversity in suppliers, transport routes and transport mechanisms may each play an important role in securing energy supplies. For example, there are a number of ongoing initiatives to develop gas pipelines between Europe and its eastern and southern neighbours. These include the Nord Stream (between Russia and the EU via the Baltic Sea) which became operational in November 2011 and the Trans Adriatic Pipeline (connecting Turkey to Italy through Greece and Albania to bring gas from the Caspian Sea region to the EU). Building reliable partnerships with supplier, transit and consumer countries is seen as a way to reduce the risks associated with the EU’s energy dependency and in September 2011 the European Commission adopted a Communication The EU energy policy: engaging with partners beyond our borders (COM(2011) 539 final).

In response to continuing concerns about the EU’s dependency on energy imports, in May 2014 the European Commission released its Energy Security Strategy (COM(2014) 330 final) which aims to ensure a stable and abundant supply of energy. As well as short-term measures looking at the impact of a halt to Russian gas imports or a disruption of imports through the Ukraine, the strategy addressed long-term security of supply challenges and proposed actions in five areas, including: increasing energy production in the EU and diversifying supplier countries and routes, and speaking with one voice in external energy policy. In 2015, the European Commission released a Communication concerning A framework strategy for a resilient energy union with a forward-looking climate change policy (COM(2015) 80 final) which argued that one important element in ensuring energy security (in particular for gas) was full compliance of agreements related to buying energy from non-member countries. This was followed in February 2016 by European Commission proposals for new rules on EU gas supply security (COM(2016) 52 final) and new rules for energy agreements between EU and non-EU countries (COM(2016) 53 final).