Planned update of the article: May 2022.

The gender employment gap decreased from 11.7 to 11.3 percentage points between 2019 and 2020, despite the large impact Covid-19 measures had on women specifically.

The employment rate gives information on the share of the population of a certain age group who have a paid job (in other words, of the employed persons). They can be paid in cash or in kind and the person can have a job as an employee, as a self-employed person or as a family worker. In most cases, a paid job is an important indicator of the living standard of people and the employment rate mainly determines the socio-economic conditions of individuals in a country. Moreover, it provides key macroeconomic information as it describes to what extent the human resources of a country are mobilised for economic purposes.

Persistent increase of the employment rate at EU level has halted 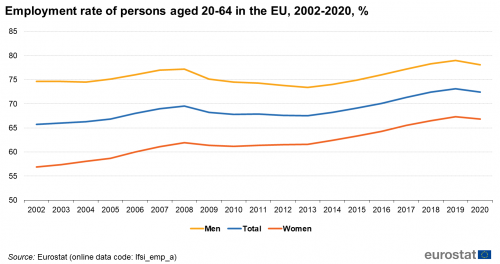 As shown in Figure 2, there are notable differences in the employment rate across EU Member States. In 2020, there was a difference of 19.7 p.p. between the country with the highest employment rate and the country with the lowest ; Sweden recorded the highest rate of 80.8 % while Greece showed the lowest rate at 61.1 %. In general, four groups of countries can be distinguished: one with employment rates lower than 70.0 %, a second with rates ranging from 70.0 to 74.9 %, a third group with rates within the range of 75.0 to 79.9 % and the fourth group with rates of 80.0 % or above. Greece, Italy, Croatia and Spain are part of the first group, while the second group consists of Belgium, Romania, France, Luxembourg, Slovakia, Ireland, Bulgaria, Poland, Portugal and Cyprus. It is now equally large as the third group, while in 2019, the third group still included more Member States. The third group contains Hungary, Austria, Slovenia, Finland, Lithuania, Latvia, Malta, Denmark, Estonia and Czechia. The last group, with the highest employment rates, contains the remaining EU Member States, i.e. the Netherlands and Sweden. German data in 2020 are not comparable to previous years, and due to be revised, so Germany is not mentioned in any of the groups. 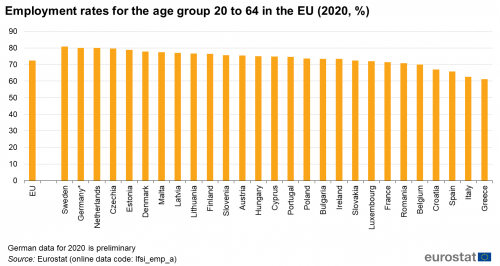 For the EU overall, the gender employment gap further decreased in 2020 compared with 2019: from 11.7 p.p. to 11.3 p.p. This decrease at EU-level is the result of a lower drop in women's employment rate between 2019 and 2020 in comparison to that of men. This shows a continuation of the trends observed during the last decade, when the employment rate for men has practically stabilised, and is hit harder during crises, while that of women continues to grow and is less prone to decrease during times of crisis. 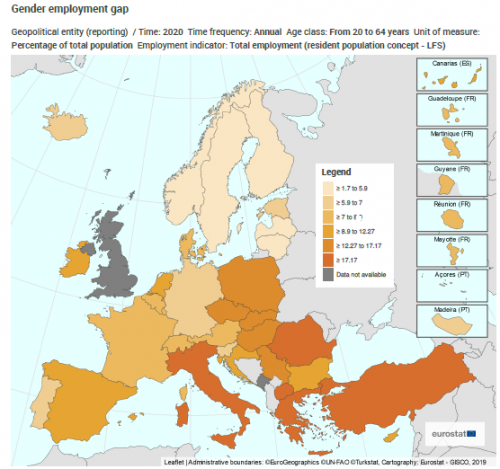 The EU has made continuous efforts over the past decades to increase not only the employment rate of women, but also that of persons aged 55-64. In 2020, the employment rate for persons aged 55-64 reached 59.6 %, the highest rate since the start of the series in 2002. It was 66.3 % for men, and 53.3 % for women. Figure 3 shows the steady increase in the employment rate observed for the overall population as well as separately for men and women aged 55-64. While starting from a low level of 26.9 % for women and 46.2 % for men in 2002, the employment rate has continuously increased each year (with the exception of a single decrease by 0.1 pp for men between 2008 and 2009). Both the financial and the debt crises, as well as the Covid-19 measures throughout 2020, led to slower growth, but have not changed that trend.

As shown in Figure 4, the differences in employment rate for the age group 55-64 across EU Member States are even higher than those observed for the age group 20-64. In 2020, there was a difference of 33.6 p.p. between the country with the highest and the country with the lowest employment rate; Sweden shows the highest rate with 77.6 % while Luxembourg has the lowest rate of 44.0 %. In Sweden, Estonia, Germany, Denmark, the Netherlands, Latvia, Czechia, Lithuania and Finland, more than two thirds of the population aged 55-64 still work, while in Romania, Croatia, Greece and Luxembourg, less than half of the population of that age group is employed.

The data used in this article are taken from the LFS Main Indicators, which offer a restricted set of indicators based on the EU-LFS. More detailed breakdowns are available in the LFS - detailed annual survey results. 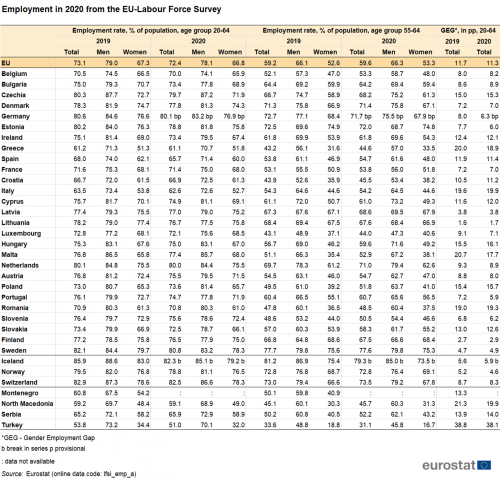 Source: The European Union Labour Force Survey (EU-LFS) is the largest European household sample survey providing quarterly and annual results on labour participation of people aged 15 and over as well as on persons outside the labour force. It covers residents in private households. Conscripts in military or community service are not included in the results.

Coverage: The results from the survey currently cover all European Union Member States, the EFTA Member States of Iceland, Norway, Switzerland, as well as the candidate countries Montenegro, North Macedonia, Serbia and Turkey. For Cyprus, the survey covers only the areas of Cyprus controlled by the Government of the Republic of Cyprus.

Definitions: The concepts and definitions used in the survey follow the guidelines of the International Labour Organisation. Employment covers persons aged 15 years and over (16 and over in Spain and Italy, 15-74 years in Estonia, Latvia, Hungary, Finland, Sweden, Norway and Denmark, and 16-74 years in Iceland), living in private households, who during the reference week performed work, even for just one hour, for pay, profit or family gain, or were not at work but had a job or business from which they were temporarily absent, for example because of illness, holidays, industrial dispute or education and training.

The EU-LFS is based on the same target populations and uses the same definitions in all countries, which means that the results are comparable between the countries.

Articles on detailed technical and methodological information can be found on the overview page EU labour force survey.

Please note that Eurostat provides two sets of indicators linked to the annual employment rate, which serve different purposes and which in some cases differ from each other:

1) The LFS main indicators, which also contains quarterly seasonally adjusted series. They include the labour market headline indicators used e.g. in the Macroeconomic Imbalance Procedure Scoreboard or the European Statistical Recovery Dashboard and are consequently used for monitoring policy. They have only a few breakdowns and normally refer to the age group 20-64. Please note that for France, two series are published: one including overseas departments starting in 2003, and one for metropolitan France, excluding overseas departments, starting in 1992. The latter is included in the relevant EU and EA aggregates.

2) The detailed results, which also contain quarterly series that are not seasonally adjusted. They have a large number of breakdowns and can therefore be used for more detailed analysis. For France, only one data series is published. This series contains data for metropolitan France until the fourth quarter of 2013, and from 2014 on, also the French overseas departments.

This article presents annual results for some indicators from the "main indicators" set.

Employment statistics are at the heart of many EU policies. The European employment strategy (EES) was launched at the Luxembourg jobs summit in November 1997 and was revamped in 2005 to align the EU’s employment strategy more closely to a set of revised Lisbon objectives, and in July 2008, employment policy guidelines for the period 2008–2010 were updated. More recently, the European Pillar of Social Rights has been jointly signed by the European Parliament, the Council and the Commission on 17 November 2017. Employment and social policies are the main fields of interest of the European Pillar of Social Rights, which is about delivering new and more effective rights for citizens. It has 3 main categories: (1) Equal opportunities and access to the labour market, (2) Fair working conditions and (3) Social protection and inclusion. In particular, today's more flexible working arrangements provide new job opportunities especially for the young but can potentially give rise to new precariousness and inequalities. Building a fairer Europe and strengthening its social dimension is a key priority for the Commission. The European Pillar of Social Rights is accompanied by a ‘social scoreboard’ which monitors the implementation of the Pillar by tracking trends and performances across EU countries in 12 areas and feeds into the European Semester of economic policy coordination. The scoreboard also serves to assess progress towards a social ‘triple A’ for the EU as a whole.