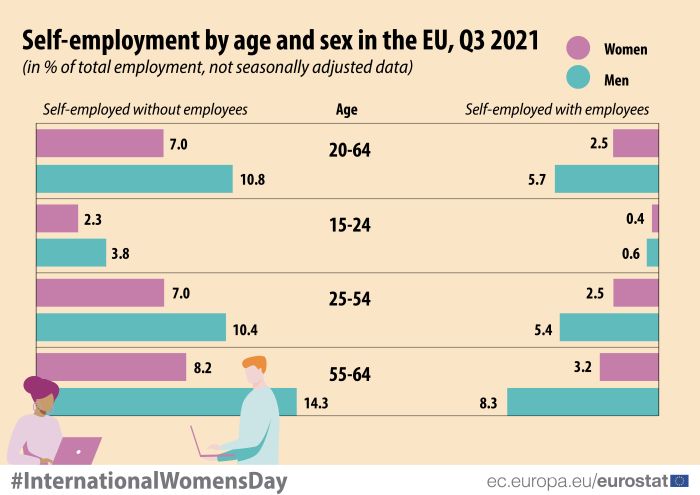 In the first three quarters of 2021, the health measures due to the COVID-19 pandemic were progressively lifted before the new COVID variant's arrival. At that time, the economy started its recovery phase and many EU governments announced the upcoming temporary, partial or complete, cancellation of the specific working arrangements or other financial support aimed at mitigating the effects of the COVID-19 pandemic on employment.

In light of this situation, this article looks at the short- and long-term development of the number of employed people by professional status (with namely a distinction between self-employed people with and without employees) to identify the consequences of the crisis on self-employment and of the halt in the financial support provided to the enterprises across the EU Member States. It also develops a complete and relevant profile of self-employed people in the EU according to sex, age and educational attainment level, and explores the sectors of economic activity and groups of occupations with the largest share of self-employed people.

The situation of people combining several jobs, working outside their country of residence or having a migrant background is also looked at, in order to enrich the analysis of employed people at EU and country level.

The present article complements the article on employment; both articles use the quarterly results of the European Union Labour Force Survey (EU-LFS) and are part of the publication Labour market in the light of the COVID-19 pandemic.

Note: Given the level of detail, the data used in this article are not seasonally adjusted.

Two thirds of self-employed people are own-account workers, one third are employers

The last category of employed people consists of contributing family workers. This professional status is relatively marginal at EU level (0.6 %). 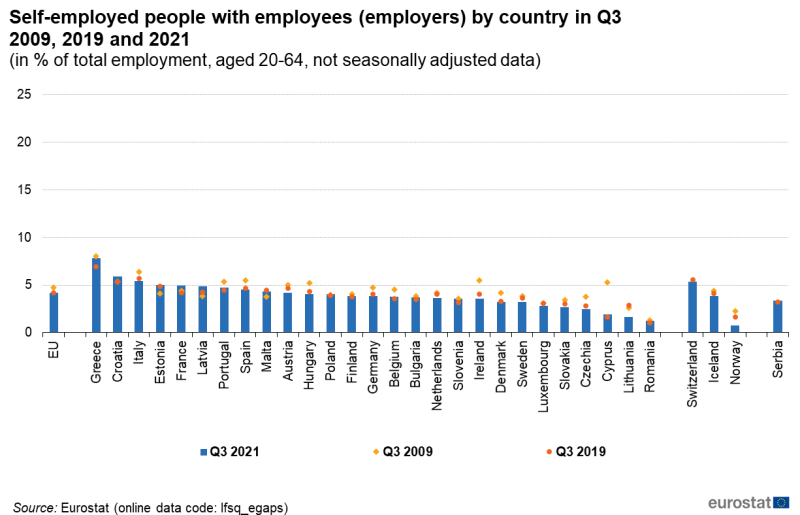 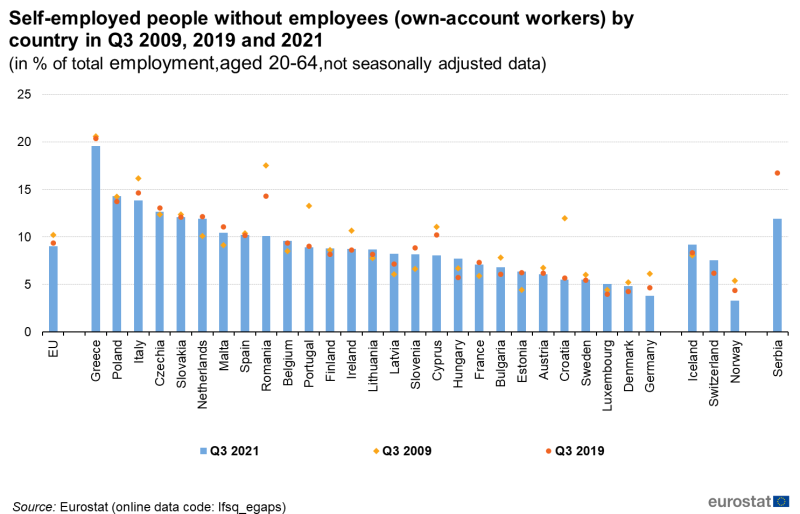 Figure 1b: Self-employed people without employees(own-account workers)by country in Q3 2009, 2019 and 2021
(in % of total employment, aged 20-64, not seasonally adjusted data)
Source: Eurostat (lfsq_egaps)

Focus on employment by occupation and sector of activities

Most skilled agricultural, forestry and fishery workers are self-employed

In Q3 2021, self-employment was the professional status of almost two thirds of skilled agricultural, forestry and fishery male workers (65.7 %) in the EU but also for female workers (61.7 %). Managers followed with more than one third (35.4 %) of male managers and almost one quarter (23.1 %) of female managers being self-employed (see Figure 3). By contrast, some occupations showed a very low level of self-employed people. Self-employment accounted for 7 % or less among the total clerical support workers (2.1 % for men and 1.7 % for women), people with elementary occupations (5.1 % for men and 2.1 % for women) and plant and machine operators and assemblers (7.0 % for men and 2.6 % for women).

Figure 4 presents the share of self-employed skilled agricultural, forestry and fishery workers in the total employment as well as the share of managers by country. It is clearly visible that the weight of self-employment in the total employment varied significantly from one country to another in Q3 2021 for these two occupational categories. More than 70 % of the skilled agricultural, forestry and fishery workers were self-employed in Greece, Poland, Ireland and Romania while they accounted for less than 50 % in Germany, Denmark, Sweden, Czechia, Bulgaria, Hungary and the Netherlands. Moreover, more than two thirds of the managers were self-employed in Italy and about 60 % in Greece and Croatia. In contrast, self-employed only accounted for less than 20 % of the managers in Cyprus, Sweden, Austria, Denmark, Finland, Czechia, Lithuania and Malta. 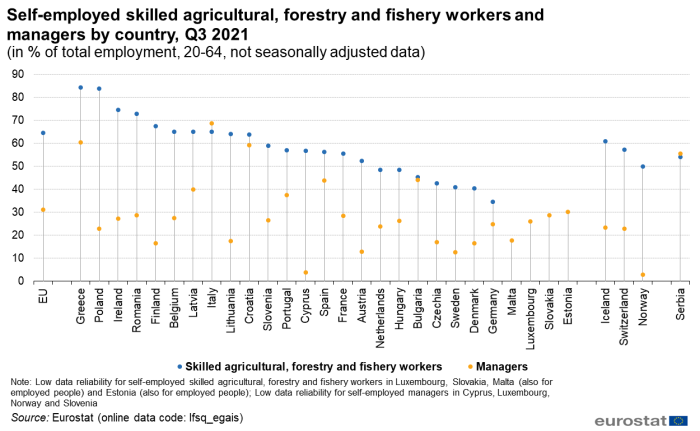 Largest differences between employees and self-employed in agriculture, forestry and fishing and in manufacturing 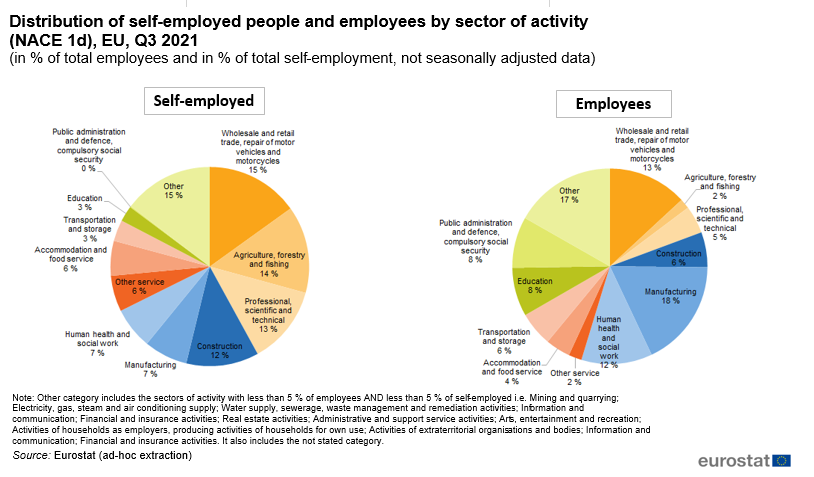 Profile of employed people with a second job 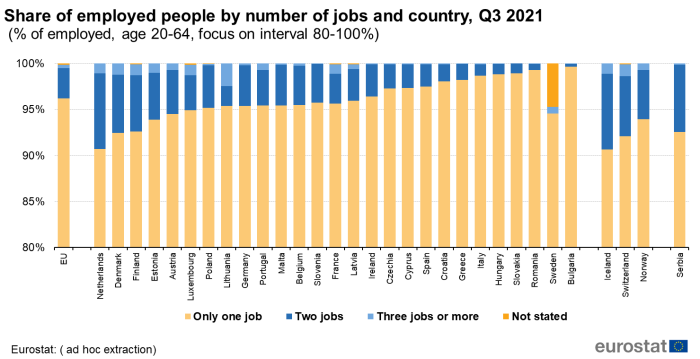 Figure 7: Distribution of people with a second job (or more) by sex and country, Q3 2021
Source: Eurostat (lfsq_e2ged)

In 15 EU countries, people with a high level of education represent the majority (more than 50 %) of people with a second job (or more), with shares ranging from 50.8 % in Malta to 73.7 % in Lithuania. In 6 other Member States, those with medium education were the majority, with shares ranging from 51.1 % in Hungary to 73.6 % in Romania. People with a low level of education were the least common group among those with at least one second job in all EU countries, with the slight exception of Spain (19.3 % with low versus 19.2 % with medium). 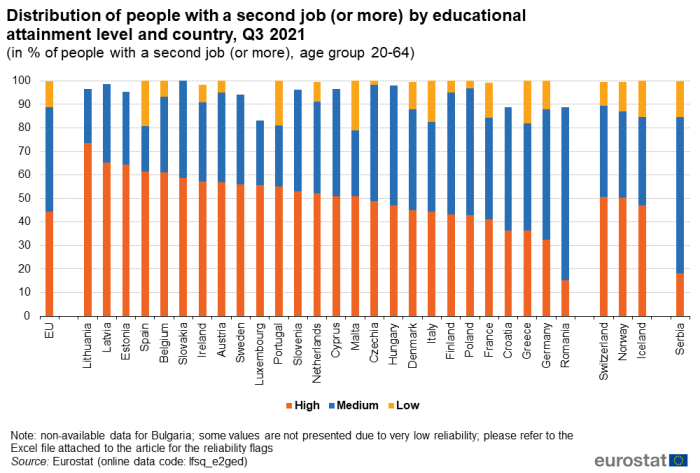 Figure 8: Distribution of people with a second job (or more) by educational attainment level and country, Q3 2021
Source: Eurostat (lfsq_e2ged)

People working outside their country of residence

As over time more countries joined the EU and participated in joint projects and goals, more people have started working across the EU, finding jobs in countries different from their own. 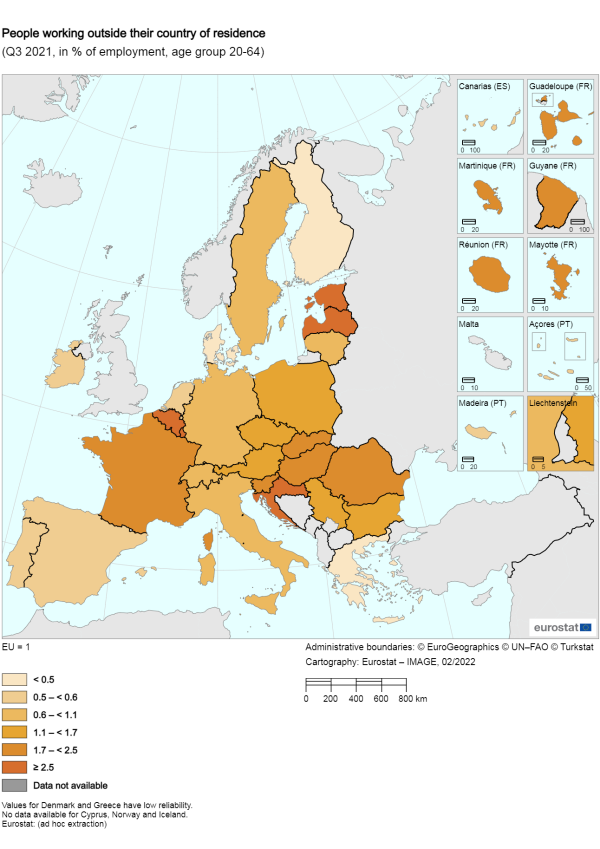 In which occupations and economic activities are the most cross-border workers?

Professionals are also a very common group, among different sectors as professional scientific and technical activities, human health and social work activities, information and communication and manufacturing, with workers ranging respectively from 56.3 to 51.8 thousand. At the end of the top 12 ranking, there are the elementary occupations of the agriculture, forestry and fishing sector with 42.4 thousand workers who work in another country than their country of residence.

Men are more common in the first two categories craft and related trades workers in the manufacturing and construction sector. Instead, for women, the most common category is the technicians and associate professionals in the human health and social work activities sector.

Starting from the first quarter of 2021, the EU-LFS provides quarterly indicators on the employment of second generation of migrants. The section "definition" below explains the various categories used in defining migration status presented in this section.

Among people with a medium or high educational attainment level, native-born people with a foreign EU background had the highest employment rate (78.4 % for the medium and 87.7 % for the high level of education).

Crossing both factors, namely sex and education level, the widest gender gaps were reported by people with a low level of education, especially among people born in a non-EU country and native-born people with a native background. Both had differences in the employment rate of men and women of more than 20 p.p. (29.2 p.p. and 22.3 p.p. respectively). 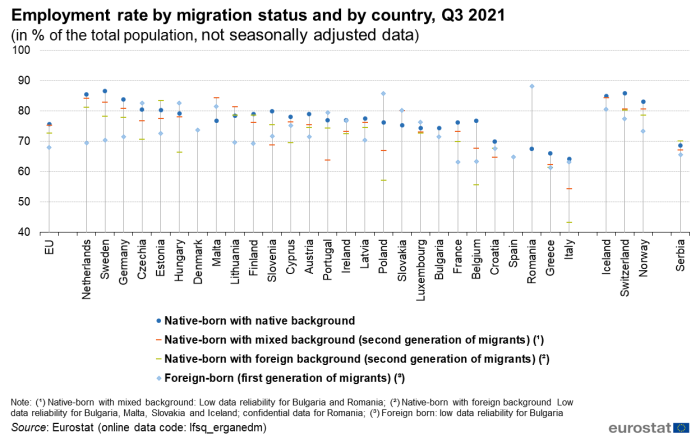 Figure 11: Employment rate by migration status and by country, Q3 2021
(in % of the total population aged 20-64, not seasonally adjusted data)
Source: Eurostat (lfsq_erganedm)

All figures in this article are based on detailed quarterly survey results from the European Union Labour Force Survey (EU-LFS).

Source: The European Union Labour Force Survey (EU-LFS) is the largest European household sample survey providing quarterly and annual results on labour participation of people aged 15 and over as well as on persons outside the labour force. It covers residents in private households. Conscripts in military or community service are not included in the results. The EU-LFS is based on the same target populations and uses the same definitions in all countries, which means that the results are comparable between countries.

European aggregates: EU refers to the sum of the 27 EU Member States.

Country notes: (1) Spain and France have assessed the attachment to the job and included in employment those who have an unknown duration of absence but expect to return to the same job once the COVID-19 measures in place are lifted. (2) In the Netherlands, the 2021 quarterly LFS data remains collected using a rolling reference week instead of a fixed reference week, i.e. interviewed persons are asked about the situation of the week before the interview rather than a pre-selected week.

Definitions: The concepts and definitions used in the Labour Force Survey follow the guidelines of the International Labour Organisation (ILO).

The migration status used in the current publication is defined as follows: 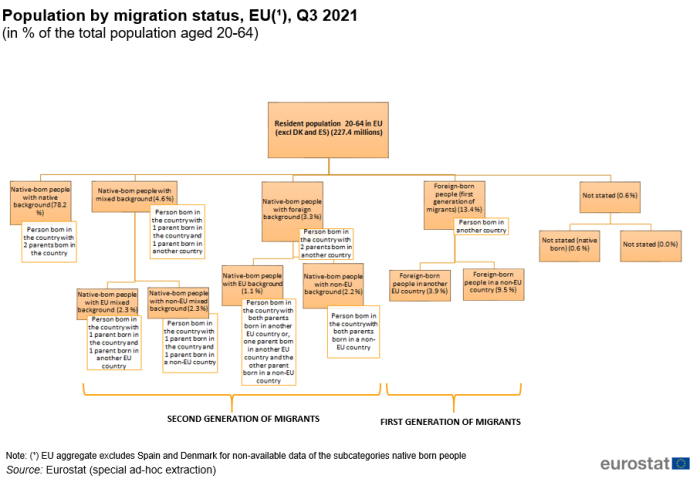 More information on this point can be found via the online publication EU Labour Force Survey, which includes eight articles on the technical and methodological aspects of the survey. The EU-LFS methodology in force from the 2021 data collection onwards is described in methodology from 2021 onwards while the one applicable until the 2020 data collection is presented in methodology until 2020. Detailed information on coding lists, explanatory notes and classifications used over time can be found under documentation.

The COVID-19 pandemic hit Europe in January and February 2020, with the first cases confirmed in Spain, France and Italy. COVID-19 infections have been diagnosed since then in all European Union (EU) Member States. To fight the pandemic, EU Member States have taken a wide variety of measures. From the second week of March 2020, most countries closed retail shops, with the exception of supermarkets, pharmacies and banks. Bars, restaurants and hotels were also closed. In Italy and Spain, non-essential production was stopped and several countries imposed regional or even national lock-down measures which further stifled economic activities in many areas. In addition, schools were closed, public events were cancelled and private gatherings (with numbers of persons varying from 2 to over 50) banned in most EU Member States.

The majority of the preventive measures were initially introduced during mid-March 2020. Consequently, the first quarter of 2020 was the first quarter in which the labour market across the EU was affected by COVID-19 measures taken by Member States.

In the following quarters of 2020, as well as 2021, the preventive measures against the pandemic were continuously lightened and re-enforced in accordance with the number of new cases of the disease. New waves of the pandemic began to appear regularly (e.g. peaks in October-November 2020 and March-April 2021). Furthermore, new strains of the virus with increased transmissibility emerged in late 2020, which additionally alarmed the health authorities. Nonetheless, as massive vaccination campaigns started all around the world in 2021, people began to anticipate improvement of the situation regarding the COVID-19 pandemic.

The quarterly data on employment allows to regularly report on the impact of the crisis due to the COVID-19 pandemic on employment. This specific article depicts employment in general and specifically by gender, age and level of educational attainment. Another article Employed people and job starters by economic activity and occupation focuses on the employed people and job starters by sector of economic activity and occupation.

Please note that in this exceptional context of the COVID-19 pandemic, employment and unemployment as defined by the International Labour Organisation (ILO) are not sufficient to describe the developments taking place in the labour market. In the first phase of the crisis, active measures to contain employment losses led to absences from work rather than dismissals, and individuals could not look for work or were not available due to the containment measures, thus not counting as unemployed. Only referring to unemployment might consequently underestimate the entire unmet demand for employment, also called the labour market slack, which is further analysed, with the evolution of the total volume of working hours, in the publication Labour market in the light of the COVID-19 pandemic.