Data extracted in June and July 2022.

This article provides an overview on the production and consumption of electricity and derived heat in the European Union (EU). The figures are based on the annual data provided by the Member States. When available, preliminary 2021 annual data are used to show the most recent trends. Eurostat's energy statistics contain data as of 1990 for all Member States and 14 non-EU countries. This article focuses primarily on data for the EU and the comparison between 2019 and 2020, including 2021 if available. The article also presents a simplified electricity and derived heat balance, as well as trade data and some derived indicators of consumption linking to population and GDP.

In 2020, renewable energy sources were the largest contributor to electricity production, surpassing natural gas and manufactured gases, solid fossil fuels (coal) and nuclear energy. This was also the first time that more electricity was generated from renewables (1 086 TWh) than from all fossil fuels together (1 012 TWh). According to preliminary data for 2021, however, the balance tipped towards fossils again in the following year. In the period from 2000 until 2020, electricity generation from renewable energy sources more than doubled (from 436 to 1 086 TWh). Compared with 2015, electricity production from renewable sources increased by 22.9 %.

To a large extent because of the COVID-19 pandemic and related lockdowns, the total gross electricity production in 2020 in the EU registered a 4.2 % decrease compared with 2019, amounting to 2 781 TWh. This makes 2020 the third year in a row with a drop in gross electricity production at EU level, although the variation between the years is not very pronounced (see Table 1, Figure 1). 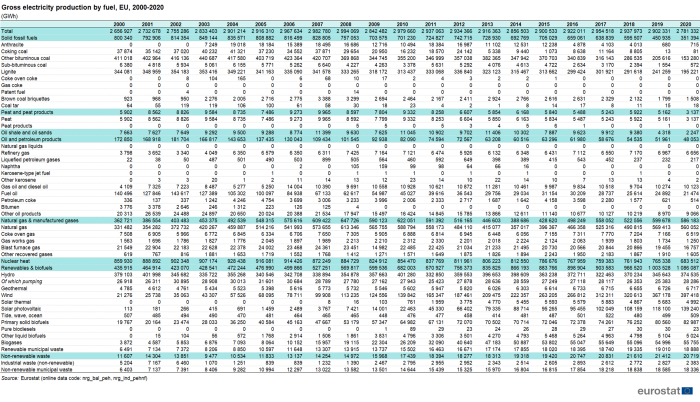 There have been significant changes in the contribution of the different renewable energy sources to electricity production over the last two decades. In 2000, 87.0 % of renewable electricity was produced from hydro energy, a share which dropped to 34.5 % in 2020. Electricity from wind, on the other hand, increased significantly in the same period, from 4.9 % of all renewables in 2000, to 36.6 % in 2020. Other renewable energy sources with large shares in electricity production in 2020 were solar photo-voltaic (12.8 % of all renewables), primary solid biofuels (7.6 %) and biogases (5.1 %). 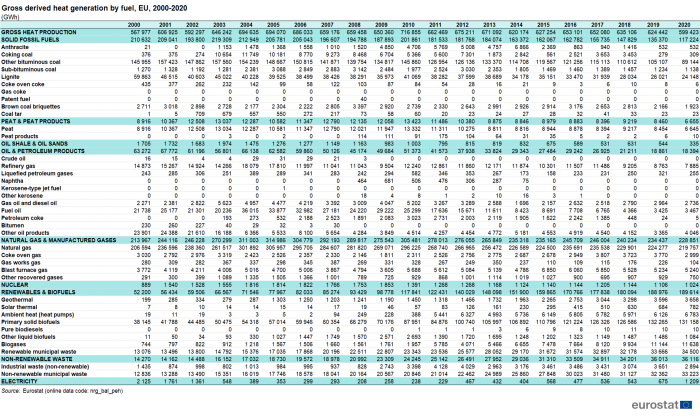 In 2020, electricity consumption amounted to 885 TWh in the industry sector, 677 TWh in the services sector, 714 TWh in the residential sector and 53 TWh in the transport sector. 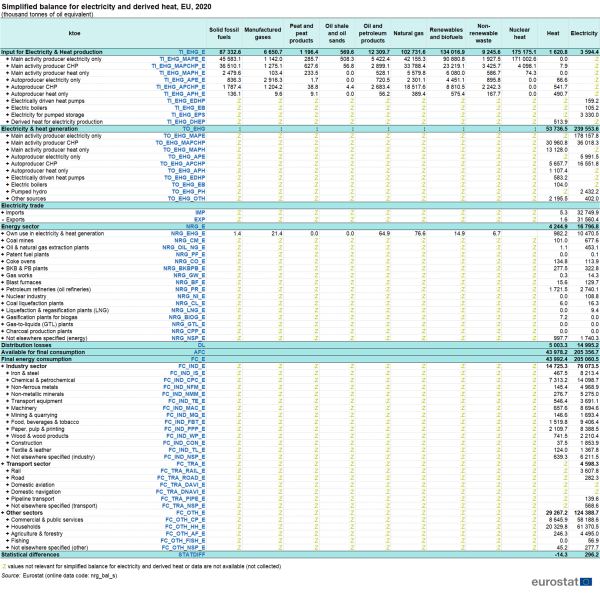 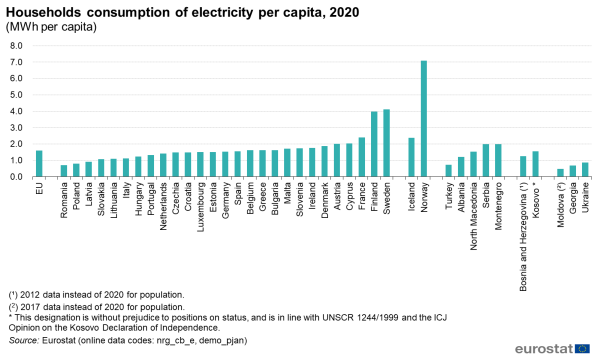 Looking on electricity consumption per capita in the households sector in non-EU countries, an even wider range is observed: from 0.5 MWh in Moldova to 7.1 MWh in Norway. The range is affected by the choice of energy used for space heating, climate conditions, as well as the level of economic development of each country.

Electricity consumption per unit of GDP (using purchasing power standards) in the EU in 2020 was 183.3 kWh per 1 000 euro (Figure 5). The amount of electricity consumed per unit of GDP depends on many factors, such as the general standard of living, the economy and weather conditions as well as the energy efficiency of buildings and appliances. Using GDP in purchasing power standards allows for better comparison across countries in one year. 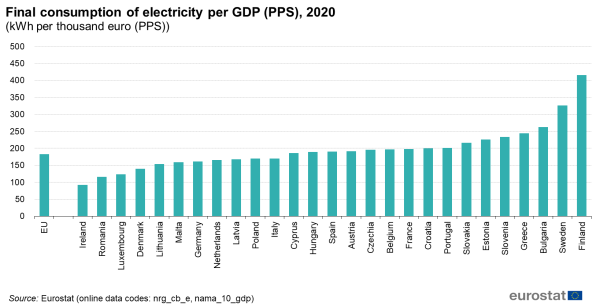 Modern societies are heavily dependent on electricity. Maintaining electricity supply is crucial for economic growth and prosperity of citizens. Heat plays a significant role in the supply of district heating in several countries in Europe. It is particularly widespread in North, Central and Eastern Europe. While both electricity and heat are appearing in nature in some form or another, in modern energy economy they are secondary energy sources. Electricity and heat are generated from primary energy sources, such as fossil fuels (mostly natural gas and coal), nuclear and renewables (hydro, wind, solar PV, geothermal energy, ambient heat and biofuels). Transition towards more sustainable supply of electricity power (e.g. from fossil fuels towards renewables) is crucially important for implementation of decarbonisation objectives of the EU – such as electrification of road transport. Several European policies in the context of Energy Union and European Green Deal are targeting also electricity supply described in this article.

Production of electricity and derived heat by type of fuel (nrg_bal_peh)