This article is part of the Eurostat online publication EU statistics on income and living conditions (EU-SILC) methodology.

Adopted in 2005, the European Statistics Code of Practice sets a number of principles for the production and dissemination of European official statistics. This constitutes comprehensive approach which builds upon a common definition of quality in statistics, in which the following dimensions are addressed: relevance, accuracy and reliability, timelines and punctuality, coherence and comparability, accessibility and clarity. This definition of quality is monitored in EU-SILC with annual quality reports prepared by both the EU Member States at national level and Eurostat at EU level. This article describes, apart from the quality reports, the following elements of EU-SILC that have an impact on the quality of data: non-sampling errors, imputation, weighting and data validation.

The non-sampling errors discussed in this section are the following: measurement errors, processing errors and non-response errors. Coverage errors are presented in the chapter about sampling.

The Commission Regulation 28/2004 defines indicators aimed at measuring unit non-response in EU-SILC. They are respectively:

Non-response is cumulative at the three stages (address contact, household interview and personal interview), so that the overall non-response rates for households and individual interviews are defined, respectively, as follows:

The use of models integrating external control variables is desirable in order to correct for non-response and most of the countries apply either a standard post-stratification based on homogeneous response groups or a more sophisticated logistic regression model.

The computation of item non-response is essential to fulfil the precision requirements. Item non-response rate is provided for the main income variables both at household and personal level and results are included in each national report. The problem of item non-response is usually dealt with imputation. It has to be kept in mind however that imputed values are not exact values and often depend on a model that could not be the perfect fit of the reality.

There are two reasons for imputing missing data in the representative surveys such as EU-SILC; one may be referred to as statistical and the other practical. The statistical reason of imputation is to minimize error of survey estimates, in particular the non-response bias component that arises when the pattern of missing data is not random. The practical reasons concern consistency between the results from different analyses (which may handle – and be affected – differently by the problem of missing data), and the convenience of not having to deal with the missing data problem at the analysis stage.

There are different imputation techniques however all of them are based on the idea that any value (or missing value) in a sample can be replaced by a new randomly chosen value from the same source population. Imputation of missing data on a variable means replacing that missing by a value that is drawn from an estimate of the distribution of this variable. Imputation can be single or multiple. In single one, only one estimate is used. In multiple imputation, various estimates are used, reflecting the uncertainty in the estimation of this distribution. The imputation techniques can be divided into those using calculated values and those using donor method. Among the methods with calculated values are those that use calculated mean, median, trend, ratio as well as those based on linear regression. Donor based techniques are divided into those using the same source of data in order to fill in the missing information (hot deck techniques) ) and those that depend on the external data sources (cold deck techniques).

As for the imputation of missing information in EU-SILC various approaches are possible. However there are some desirable properties that the procedure should have. The Commission Regulation 1981/2003 stipulates some general rules for the imputation procedures that should be applied. According to this regulation two types of approaches (which may be used in combination) can be applied to EU-SILC data:

In the Regulation it is also said that the procedure applied to the data should preserve variation of and correlation between variables. Methods that incorporate “error components” into the imputed values are preferable to those that simply impute a predicted value. Additionally methods which take into account the correlation structure (or other characteristics of the joint distribution of the variables) are preferable to the marginal or univariate approach which deals with the imputation of each variable separately.

More details on the imputation methods applied by the countries conducting EU-SILC can be found in the national quality reports that can be found on Circabc.

In the household surveys sample weights can be considered as measures of the number of persons or households the particular sample observation represents in the reference population. They are used to produce estimates of statistics that would have been obtained if the entire sampling frame had been surveyed. Sample weights allow for correcting imperfections in the sample that might lead to bias and other differences between the sample and the reference population. Such imperfections include the selection of units with unequal probabilities, non-coverage of some specific groups of population and non-response.

According to the Commission Regulation 1982/2003 on sampling and tracing rules in EU-SILC “weighting factors shall be calculated as required to take into account the units' probability of selection, non-response and, as appropriate, to adjust the sample to external data relating to the distribution of households and persons in the target population, such as by sex, age (five-year age groups), household size and composition and region (NUTS II level), or relating to income data from other national sources where the Member States concerned consider such external data to be sufficiently reliable”.

Design weights Design weights are rather of methodological interest and are not used in the data analysis. They should be defined for all selected units and not only for those which respond to the survey. They are calculated by taking the inverses of the inclusion probabilities:

Design weights should ensure unbiased estimates for totals, however, in case of EU-SILC, because of non-response, they have to be corrected in order to reduce bias burden at the estimation stage.

There are different reasons for not having information collected, e.g. household refuses to cooperate or is temporarily away or data were collected but they are of insufficient quality, etc. Non-response is particularly critical when the non-responding units over-represent survey characteristics, which may create substantial bias in the estimates. Therefore good and efficient procedures to make the adjustments for non-response are very important. Unfortunately the possibilities are often constrained by lack of information as such an adjustment has to be based on characteristics which are known for both responding and non-responding units.

A classical procedure for non-response adjustment consists of modifying the design weights by a factor inversely proportional to the response rate within each weighting cell. It is common to use sampling strata or other geographical partitions as weighting cells. An alternative way to estimate response probabilities is to use a regression-based approach. Using an appropriate model such as logit regression, response propensities can be estimated as a function of auxiliary variables, which are available for both responding and non-responding units.

It is important to ensure that no step in the weighting procedure results in extreme values of the weights, i.e. it should be ensured that large variation in the weight values is not introduced as a result of the above mentioned adjustments. Basically, at each step of the weighting procedure, the distribution of the resulting weight adjustments should be checked. There is no rigorous procedure for general use for determining the limits for trimming. While more sophisticated approaches are possible, it is recommended for EU-SILC to have a simple and practical approach.

The base weights are computed and updated for each panel independently and that is why they are rarely used in the analysis. On the other hand they are the backbone of the computation of both cross-sectional and longitudinal weights.

For the first year wave the base weights are identical to described above adjusted design weights. In subsequent waves there will be persons leaving the target population due to different reasons e.g. due to death, migration to another country, movement out of the private household, etc. There will be also cases when the household or the person remains in the target population nevertheless the information is missing due e.g. lack of contact, refusal to participate in the country, etc. Thus the base weights at subsequent waves are the base weights from the first wave adjusted for attrition. The main difference from similar adjustment for non-response at first wave of EU-SILC is that a lot of information is available about non-respondents at subsequent waves, as those persons have been enumerated in one of the previous

Cross-sectional weights for the first wave are identical to the base weights described above. The following procedure describes the construction of the weights for subsequent waves.

In order to put the four cross-sections together the base weights are divided in the following way: 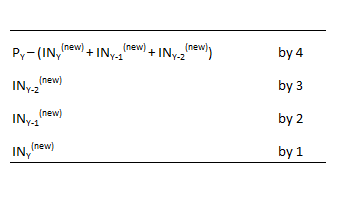 Let ωj be the weight of unit j after the above-mentioned modification. Within a household, each member j has been assigned a weight ωj, except for "co-residents", i.e. for every household members who are ineligible for inclusion in the panel, for whom ωj=0. An average of these weights over all household members (including co-residents) is assigned to each member (including co-residents). Finally, the four panels are combined and the weights are scaled by a factor of 4:

The final step is to calibrate the weights against external information using the approach already described above. Integrative calibration ensures that all household members receive the same weight. 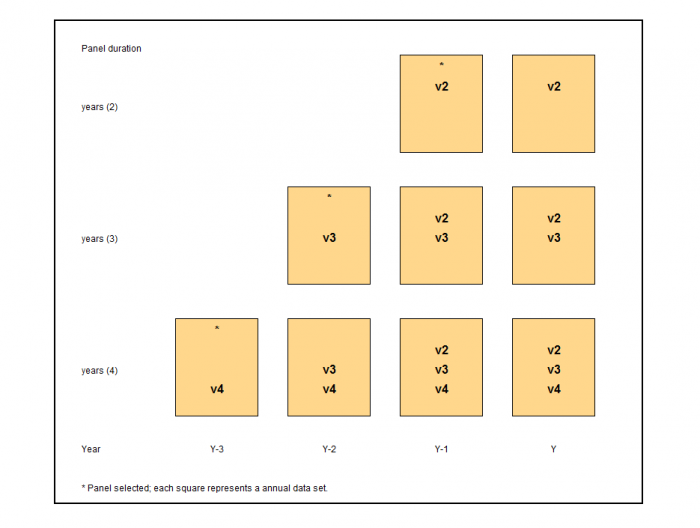 Looking at the components of longitudinal samples (1), (2) and (3) defined above, two types can be identified:

A. Panels starting from their time of selection (t=1):

B. Panels which are included from a later time (t>1):

In all cases of type A above, the weights involved are identical to base weights defined earlier: 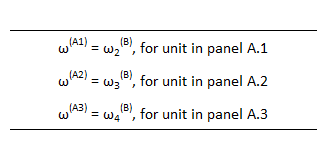 In cases B there are samples of two and three year duration. The weights for them are constructed in the following way:

To ensure proper representation of the special groups identified in the final column the weights should be multiplied in the following way:

Then the required weights are computed as follows:

where ω is the weight for any unit j as defined above.

After multiplying the weights assigned to cases in INY-2(new) by 2, the required weight for the longitudinal units of interest is computed as:

More details about the construction of EU-SILC weights can be found in:

Cross-sectional and longitudinal weighting for the EU-SILC rotational design

There is a comprehensive validation procedure applied for EU-SILC data. All countries conducting the survey validate data before sending it to Eurostat. Countries may apply their own validation procedures in the course of data processing, nevertheless at the end of data validation at national level they should carry out the complete checking procedurethat is also applied at Eurostat. This procedure is very accurate and controls many aspects of data. It checks for syntax and logical errors, controls the weights, compares year to year results, detects outliers, etc. Along with data countries are obliged to provide to Eurostat a commented summary of the error report produced by this checking tool.