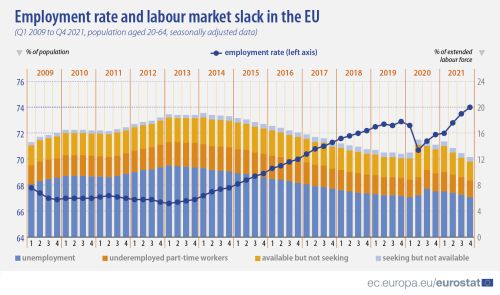 This article presents seasonally adjusted quarterly indicators on employment and labour market slack, which comprises all persons who have an unmet need for employment, including unemployed people. In the particular context of the COVID-19 pandemic and the measures applied to combat it, these indicators, taken together, capture the most recent movements on the labour market in the EU Member States.

At the same time, seasonally adjusted total labour market slack in the EU, consisting of unmet need for work, amounted to 26.2 million persons, which represented 12.3 % of the extended labour force in the fourth quarter of 2021, down from 12.8 % in the third quarter of 2021 (-0.5 p.p.). Concerning its main component, unemployment, 12.9 million persons were unemployed in the fourth quarter of 2021 and the EU seasonally adjusted unemployment rate was 6.3 %, 0.4 p.p. lower than in the third quarter of 2021 when it was 6.7 %. Underemployed part-time workers made up 2.6 % (-0.1 p.p.), those available for work but not searching for work were 2.9 % (-0.1 p.p.) and those actively searching for work but not available to take up work stood unchanged at 0.7 %, all in percentage of the extended labour force.

Labour market slack decreased the most in Croatia, Cyprus, Latvia, Estonia and Spain 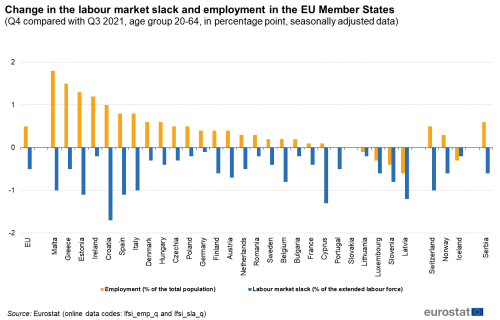 Focus on the gender gap in employment development 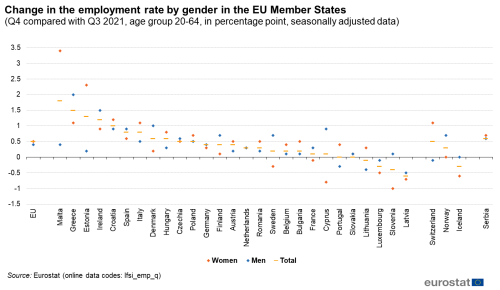 Unemployment in the EU Member States 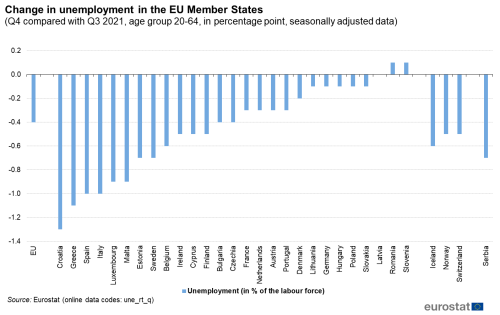 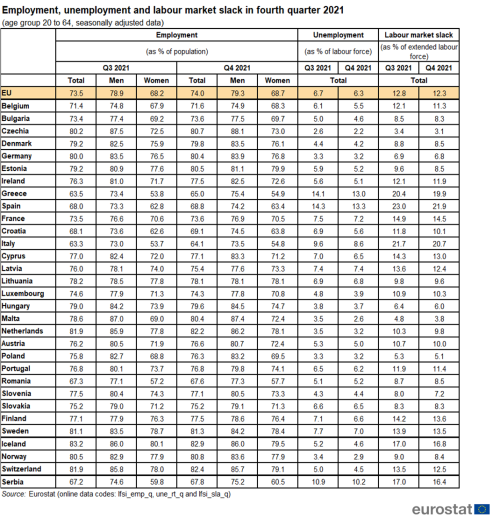 All figures in this article are based on seasonally adjusted quarterly results from the European Union Labour Force Survey (EU-LFS).

The European Union labour force survey (EU-LFS) is the largest European household sample survey providing quarterly and annual results on labour participation of people aged 15 and over as well as on persons outside the labour force. It covers residents in private households. Conscripts in military or community service are not included in the results. The EU-LFS is based on the same target populations and uses the same definitions in all countries, which means that the results are comparable between countries.

The labour market indicators published from the first quarter 2021 are based on the EU Labour Force Survey (EU-LFS) under the new Regulation (EU) No 1700/2019 on European statistics relating to persons and households, based on data at individual level collected from samples. This new Framework Regulation further improves harmonisation and comparability of labour market data in the EU.

The main changes are:

Eurostat produces harmonised labour market data for individual EU Member States, the euro area and the EU. The concepts and definitions used in the Labour Force Survey follow the guidelines of the International Labour Organisation.

Employed persons are all persons who worked at least one hour for pay or profit during the reference week or unpaid for a business owned by a member of the family, or were temporarily absent from such work. The employment rate is the percentage of employed persons in relation to the total population.

The Gender Employment Gap is the difference between the employment rates of men and women aged 20-64.

Unemployed persons are all persons who:

The labour market slack is the sum of unemployed persons, underemployed part-time workers, persons seeking work but not immediately available and persons available to work but not seeking, expressed as percentage of the extended labour force.

Underemployed part-time workers are persons working part-time who wish to work additional hours and are available to do so. Part-time work is recorded as self-reported by individuals.

The extended labour force is the total number of people employed plus unemployed, plus those seeking work but not immediately available plus those available to work but not seeking. In this article, data cover persons aged 20 to 64.