Crude oil largely dominated EU imports in energy products in 2021 with a share of 62 % , followed by natural gas in gaseous state with 25 %.

In 2021, Russia remained the largest supplier of natural gas and petroleum oils to the EU. 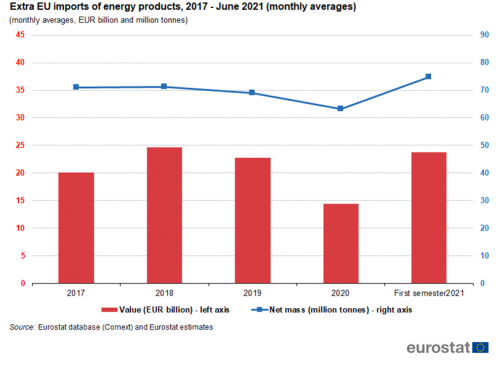 This article provides a picture of trade in energy products between the European Union (EU) and the rest of the world (extra EU trade), and between the Member States (intra-EU trade). Special focus is given to Russia as the main supplier of petroleum oils and natural gas to the EU. Coal, lignite, peat and coke are the other key energy products considered hereafter.

Annual data from 2017 to 2021 are included, thus reflecting the most recent developments. Priority was given to trade in value (expressed in millions of euros) and net mass (weight without packaging expressed in tonnes). Supplementary information like trade in terajoules for natural gas can be found in Eurostat databases. 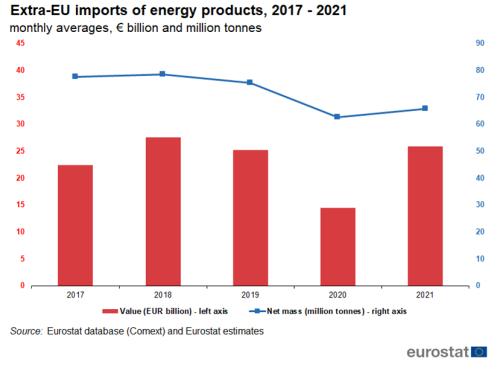 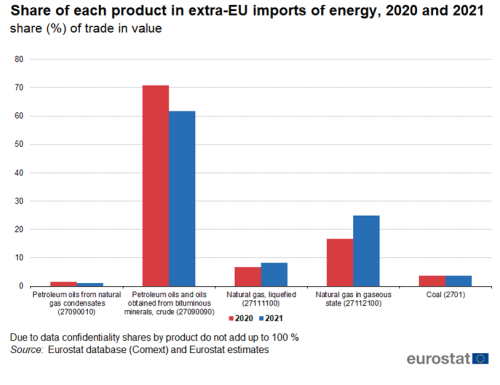 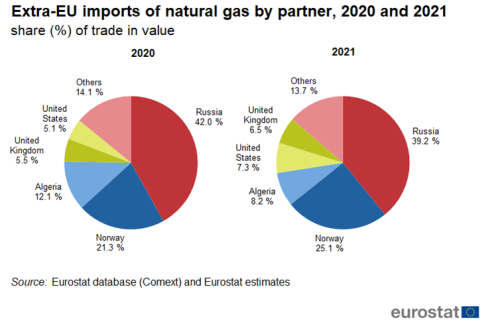 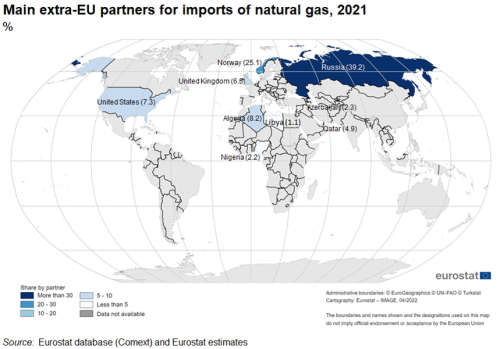 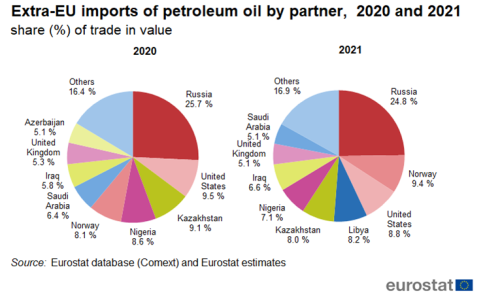 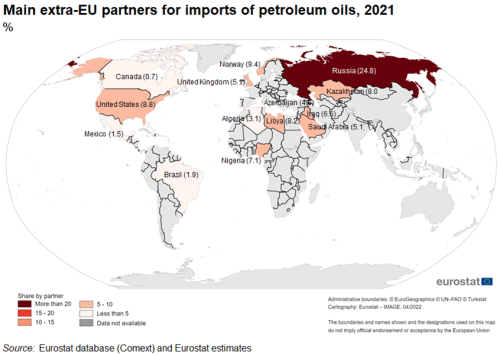 The detailed tables for main import partners of petroleum oils and natural gas are available here.

The EU imports of natural gas from Russia and the rest of the world, expressed in value and net mass, are shown in Figure 5. In value, developments for Russia and other non-EU countries are similar: an increase in 2018, decrease in 2019 and 2020, followed by a sharp rise in 2021. Fluctuations in net mass are smaller than in value and follow more or less the same pattern, except in 2018 when imports from extra-EU countries excluding Russia decreased in net masss while they increased in value. The share of Russia in total extra-EU imports of natural gas, measured in net mass, increased from 39 % in 2017 to 44 % in 2021. 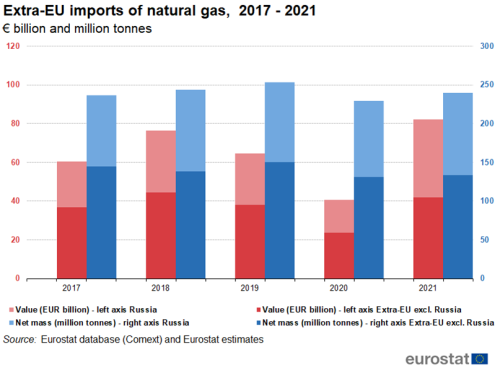 For petroleum oils, total net mass increased slightly between 2017 and 2019. In 2020 due to the COVID-19 crisis there was a large drop in net mass which put downward pressure on prices causing the value of petroleum oils to drop stronger than net mass. In 2021, net mass did not change much compared to 2020 but values increased strongly. The share of Russia in total extra-EU imports of petroleum oils, measured in net mass, decreased from 30 % in 2017 to 26 % in 2021. 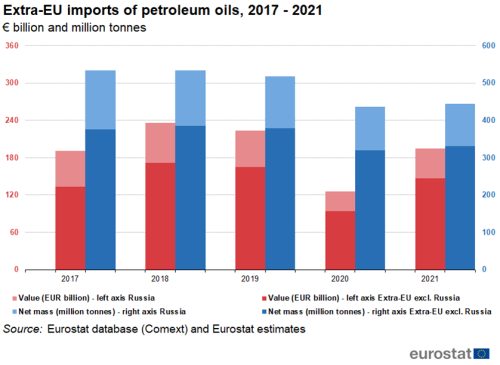 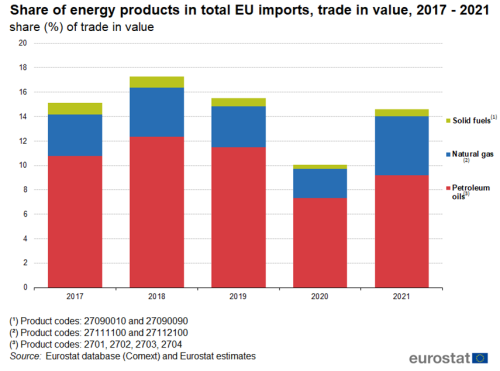 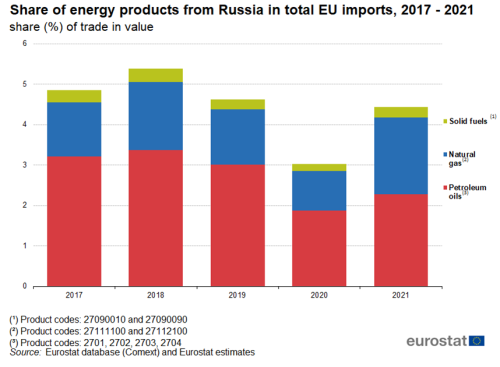 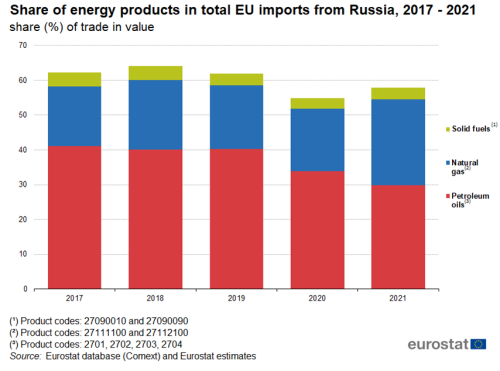 The detailed tables for extra EU and Russian shares of energy imports in total imports are available here. 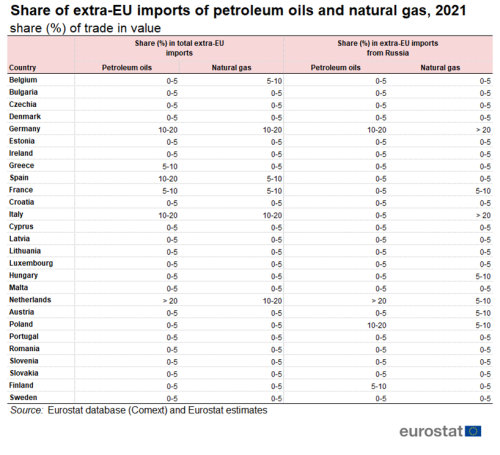 In 2021, in four Member States (Bulgaria, Slovakia, Hungary and Finland) more than 75 % of their imports in petroleum oils came from Russia (Table 2). Ten Member States (Bulgaria, Czechia, Estonia, Latvia, Hungary, Austria, Romania, Slovenia, Slovakia and Finland) imported more than 75 % of their natural gas imports from Russia. In both cases, these are predominantly countries that are in close proximity to Russia. Most of the countries with shares below 25 % of imports from Russia in either product are further away from Russia. 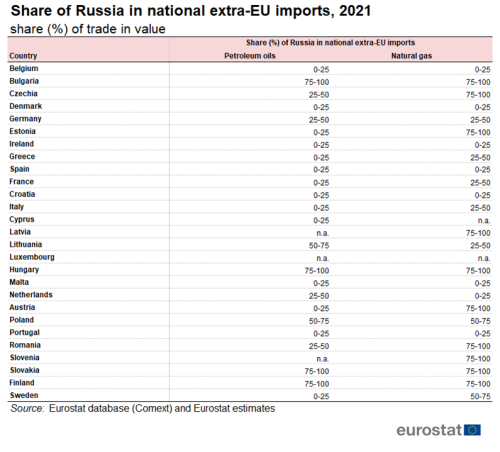 By combining Tables 1 and 2 we are able to check the dependency on Russia for the largest importers of petroleum oils and natural gas in the EU. For petroleum oils, the largest importers from the extra EU were Germany, Greece, France, Italy and the Netherlands (all above 10 %) in 2021. Of those, the share of Russia in national imports was less than 25 % for Greece, France, Spain and Italy and between 25 % and 50 % for the Netherlands and Germany.

For natural gas the largest importers were Germany, Italy and the Netherlands (all above 10 %) in 2021. Of those three the share of Russia was less than 25 % for the Netherlands and between 25 % and 50 % for Italy and Germany. 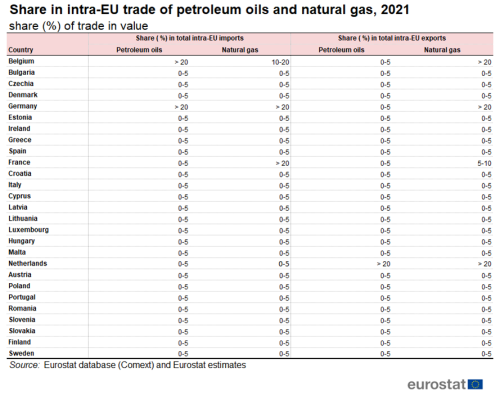 Part of the petroleum oils and natural gas imported from Russia and elsewhere is also traded in the EU Internal Market. Table 3 gives some indicative figures for this effect, but no indication is given of the origin of the energy products that are subsequently part of intra-EU trade flows. The shares of imports of petroleum oils are between 0-5 % for all but two of the 27 EU Member States. The exceptions were Belgium and Germany, with shares of more than 20 %. For natural gas, France, Germany (both more than 20 %), Belgium (between 10 % and 20 %) were the exceptions. For intra-EU exports of petroleum oils only the Netherlands (more than 20 %) had a share above 5 % while for natural gas there were four exceptions: Belgium, Germany, the Netherlands (all more than 20 %) and France (5-10 %).

Data are collected by the competent national authorities of the Member States and compiled according to a harmonised methodology established by EU regulations before transmission to Eurostat. For extra EU trade, the statistical information is mainly provided by the traders on the basis of customs declarations.

EU data are compiled according to Community guidelines and may, therefore, differ from national data published by the Member States. Statistics on extra EU trade are calculated as the sum of trade of each of the 27 EU Member States with countries outside the EU. In other words, the EU is considered as a single trading entity and trade flows are measured into and out of the area, but not within it.