Data extracted in March and April 2017.

Highlights
Tweet
Real growth in GDP averaged 1.0 % per year between 2005 and 2015 in the EU, compared with 5.1 % per year in ASEAN.
Tweet
All EU and ASEAN Member States (except for Myanmar) reported lower inflation rates in 2015 compared with 2005. 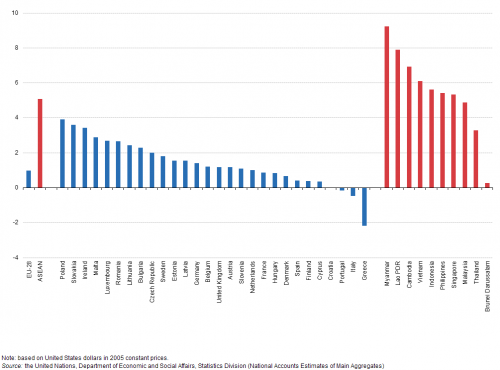 This article is part of a set of statistical articles based on Eurostat’s publication 40 Years of EU–ASEAN Cooperation — Key statistics. It provides a selection of statistics on the European Union (EU) and its Member States in comparison with the Association of Southeast Asian Nations (ASEAN) and its Member States and focuses on economic and finance data. It covers a set of key indicators including gross domestic product (GDP), government finances, prices and foreign direct investment.

During the period 2005–2015, most ASEAN Member States averaged annual growth in excess of 4.0 %, which was therefore faster than in any of the EU Member States. The two exceptions were: Thailand, where the rate of economic growth was slightly more modest, 3.3 %, and therefore slower than in Poland, Slovakia and Ireland; and Brunei Darussalam, where the economy grew on average by 0.3 % each year, higher only than the rates recorded in Croatia, Portugal, Italy and Greece.

It should be noted that the period under consideration includes the global financial and economic crisis. The EU-28 recorded a 4.4 % fall in GDP in 2009 and a further fall of 0.4 % in 2012, but recorded growth in all other years between 2005 and 2015; the fastest expansion in economic activity in the EU-28 was recorded prior to the global crisis, 3.3 % in 2006 and 3.0 % in 2007. By contrast, ASEAN recorded uninterrupted growth each year during the period under consideration, although it clearly felt the impact of the crisis: real GDP growth dropped from 4.2 % in 2008 to 1.7 % in 2009 before rebounding to 8.0 % in 2010. Half of the ASEAN Member States — Myanmar, Vietnam, Indonesia, the Philippines and Cambodia — reported uninterrupted growth throughout this period, whereas Poland was the only EU Member State to achieve this feat. 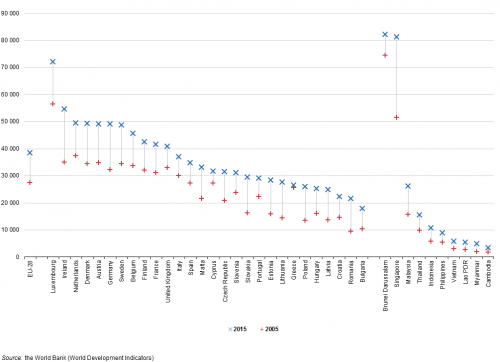 An analysis of the broad structure of value added is presented in Figure 3, which shows some key differences between the EU and ASEAN Member States in 2015: 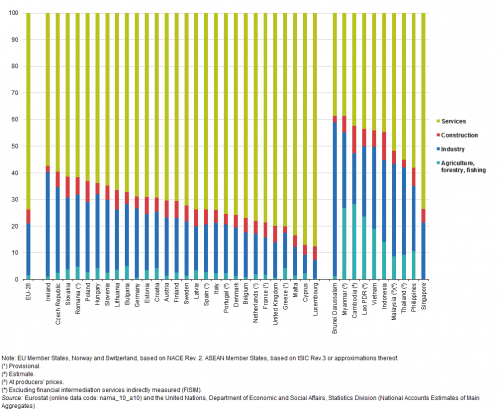 Gross capital formation includes investment in fixed capital and valuables, as well as changes in stocks; relative to GDP it gives a broad indication of the scale of investment in an economy. For the EU-28, gross capital formation was 19.7 % of GDP in 2015 (see Figure 4), this was lower than the ratios recorded in all of the ASEAN Member States. Brunei Darussalam, Myanmar, Indonesia and Lao PDR had the highest ratios of gross capital formation to GDP in 2015, all in excess of 30.0 %. Myanmar and Brunei Darussalam recorded by far the largest increases in this ratio over the last decade (2005–2015), more than doubling. By contrast, the ratio of gross capital formation to GDP was lower in 2015 than it had been in 2005 in the Philippines, Lao PDR, Vietnam and Thailand, as well as in 22 of the EU Member States: in Greece the ratio in 2015 was less than half what it had been in 2005, falling below 10.0 %, the lowest level among the EU Member States. 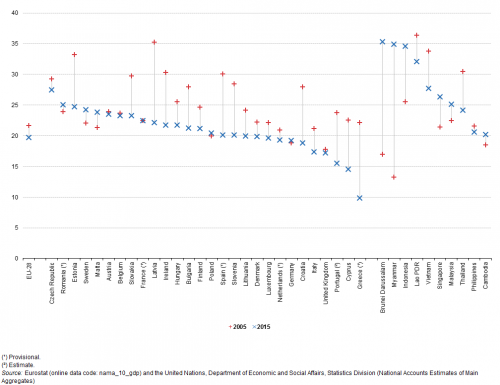 The trading nature of Singapore’s economy can be clearly seen from Figure 5, as the value of exports and imports were both above its level of GDP in 2015, a situation that could also be seen in Luxembourg (where exports and imports were each more than twice the level of GDP) and Malta within the EU-28; in Ireland, the value of exports was also higher than GDP. Among the ASEAN Member States, Singapore recorded a trade surpluses valued at around one quarter of its GDP, while Ireland and Luxembourg recorded surpluses that neared one third of their GDP. Trade deficits of less than 2.0 % of GDP were recorded in six EU Member States, with larger ratios of trade deficits to GDP in Cambodia (4.8 % of GDP), Lao PDR (4.9 %), the Philippines (5.3 %) and Myanmar (10.5 %). 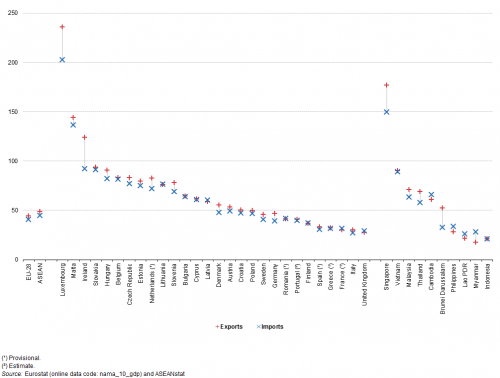 The global financial and economic crisis of 2008–2009 and the subsequent sluggish recovery in much of the EU-28 resulted in a considerable impact on key government finance indicators, notably government borrowing/lending for a particular year (public balance) and the consolidated stock of debt at the end of the year (general government debt). 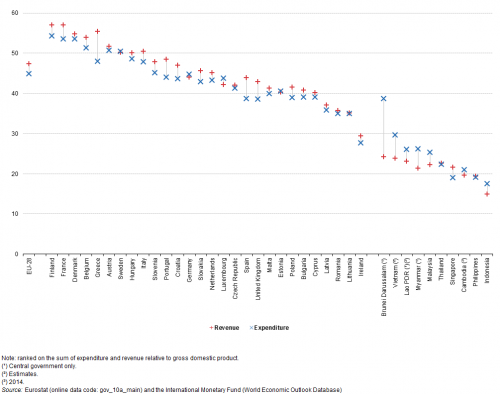 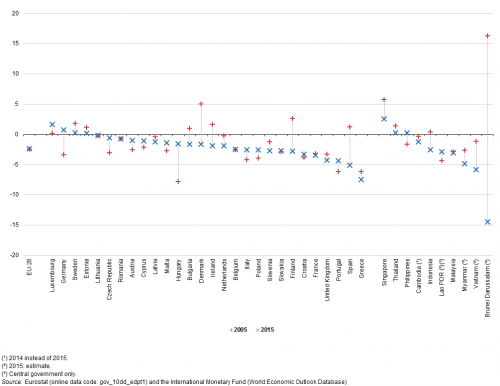 Figure 8 shows the ratio of general government gross debt to GDP in 2005 and 2015. For the EU-28, this ratio rose from 61.5 % to 85.0 %, as government expenditure increased in response to the global financial and economic crisis. In fact, this ratio peaked at 86.8 % of GDP in 2014, before recording its first fall since 2007 the year after. Among the ASEAN Member States, only Singapore had a ratio of government debt to GDP that was above the EU-28 average, as this ratio just exceeded 100 %, a situation that was also found in Greece, Italy, Portugal, Cyprus and Belgium. Among the EU Member States, Estonia had the lowest government debt to GDP ratio, 10.1 %, while in Brunei Darussalam the ratio was even lower, just 2.8 %. 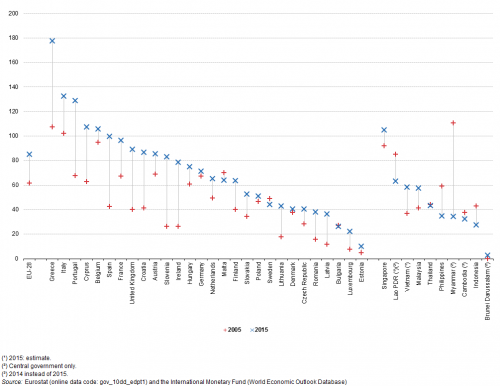 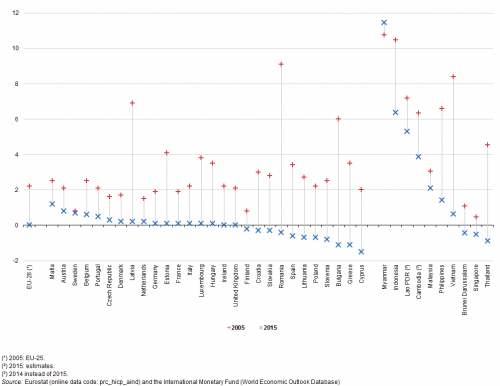 The indicators presented are often compiled according to international — sometimes global — standards. Although most data are based on international concepts and definitions there may be certain discrepancies in the methods used to compile the data.

Almost all of the indicators presented for the EU and its Member States have been drawn from Eurobase, Eurostat’s online database. In exceptional cases some indicators for the EU have been extracted from international sources.

For ASEAN and its Member States, the data presented have been extracted from ASEAN statistics and a range of international sources, namely the World Bank, the United Nations, Department for Economic and Social Affairs, Statistics Division and the International Monetary Fund (IMF).

For many of the indicators, multiple international statistical sources are available, each with their own policies and practices concerning data management (for example, concerning data validation, the correction of errors, the estimation of missing data, and the frequency of updating). In general, attempts have been made to use only one source for each indicator in order to provide a comparable analysis between the EU Member States or between the ASEAN Member States.

GDP is the most commonly used economic indicator and provides a measure of the size of an economy, corresponding to the monetary value of all production activities. GDP includes goods and services, as well as products from general government and non-profit institutions within a country (‘domestic’ production). GNI is the sum of gross primary incomes receivable by residents; this is the same as GDP less income payable to non-residents plus income receivable from non-residents (‘national’ concept).

Economic developments can be measured over time by removing the impact of price developments (inflation) to identify the real change in economic activity. Equally, comparisons between countries can be facilitated when indicators are converted from national currencies into a common currency using purchasing power parities (PPPs) which reflect price level differences between countries.

In order to establish ties that would benefit the 1.1 billion people of the EU and ASEAN, economic cooperation is furthered through:

ASEAN is a large and growing market. If ASEAN were a single economy, it would already be the seventh largest in the world and its GDP growth remains above the global average.

Gross value added and income by A*10 industry breakdowns (nama_10_a10)