The main functions of general government units include organising and redirecting flows of money, goods and services or other assets among corporations, among households, and between corporations and households (examples include the redistribution of national income and wealth), or the production of goods and services to satisfy households’ needs (for example, the provision of state health care or culture to the whole community).

It should be noted that apart from these two groups of the COFOG classification, some expenditure on culture may also be included in other COFOG Groups, mainly Groups 08.5 (R&D related to recreation, culture and religion) and 08.6 (recreation, culture and religion not elsewhere classified) but their cultural components cannot be distinguished. Consequently, the data presented here are an approximation of the general government expenditure on culture.

In 2018, across the EU-27, approximately 1.4 % of general government expenditure was allocated to cultural services as well as to broadcasting and publishing services. This percentage remained relatively stable over time within the EU-27, although there were considerable differences when analysing the results for individual EU Member States.

In 2018, the highest proportions of general government expenditure on cultural services, broadcasting and publishing services were recorded in Hungary (3.5 %), Latvia (3.2 %) and Estonia (2.9 %), while the lowest shares were recorded in Greece (0.5 %), Cyprus, Portugal and Italy (0.9 % for these three countries). 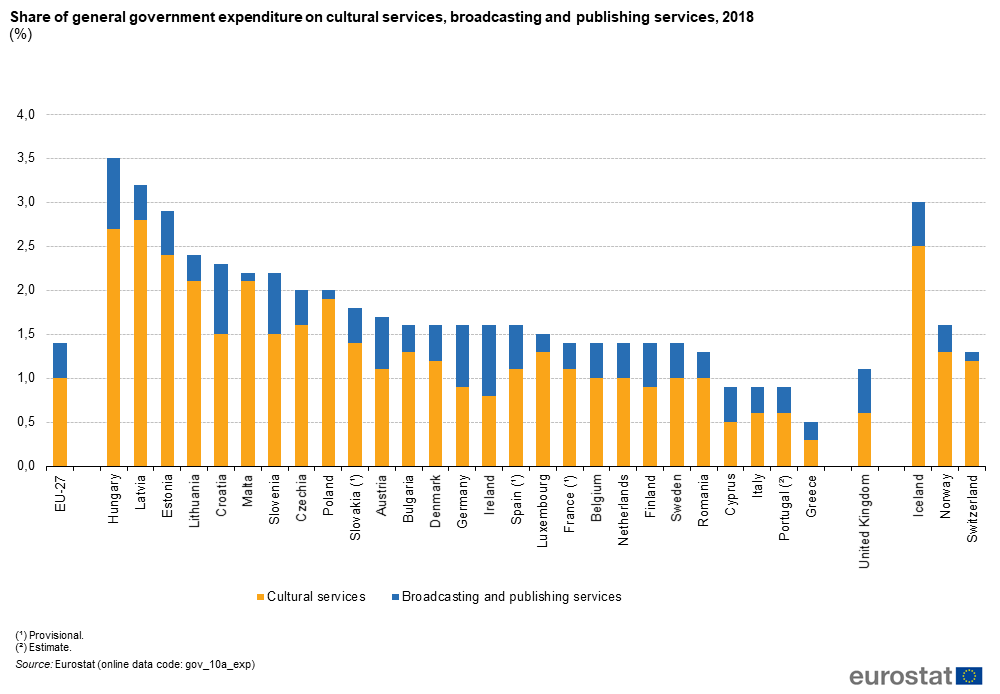 In absolute terms, EU-27 general government expenditure on cultural services, broadcasting and publishing services was just over EUR 90 billion in 2018.

There were also relatively small changes reported in a majority of the EU Member States between 2013 and 2018. The main exception was Hungary, where the share of cultural services in general government expenditure almost doubled from 1.5 % to 2.7 %. Notable increases were reported also in Malta, Lithuania (from 1.6 % to 2.1 % in both countries) and Poland (from 1.5 % to 1.9 %). The largest percentage decrease in public expenditure on cultural services during the analysed period was recorded in Estonia (from 2.8 % to 2.4 %). Looking at absolute values, 22 of the 27 EU Member States recorded an increase in public expenditure on cultural services in 2018 compared to 2013, with only five countries (France, Croatia, Cyprus, Portugal and Sweden) reporting a decrease. 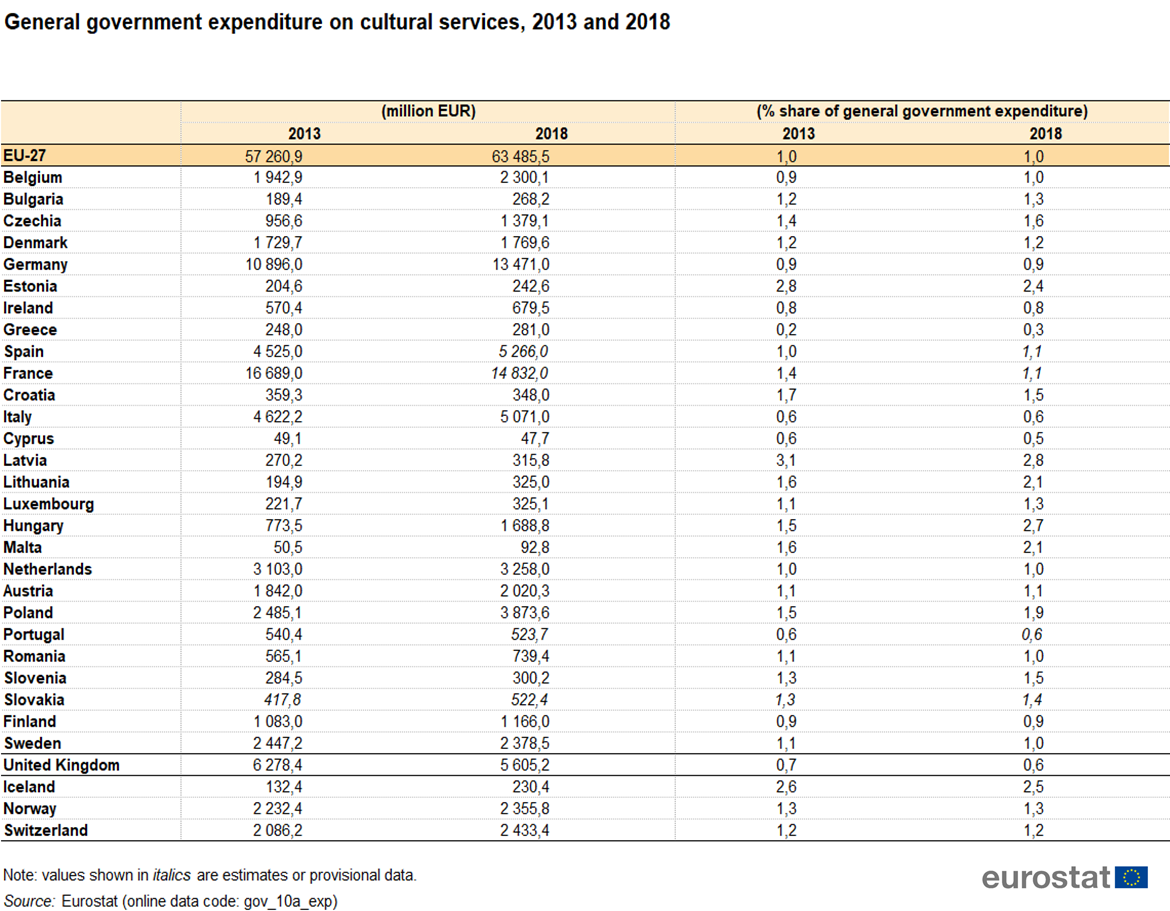 As concerns the share of EU-27 general government expenditure devoted to broadcasting and publishing services, this remained at 0.4 % in both analysed years (see Table 2). Only some EU Member States reported slight changes of this share between 2013 and 2018, with the highest increase recorded in Italy. 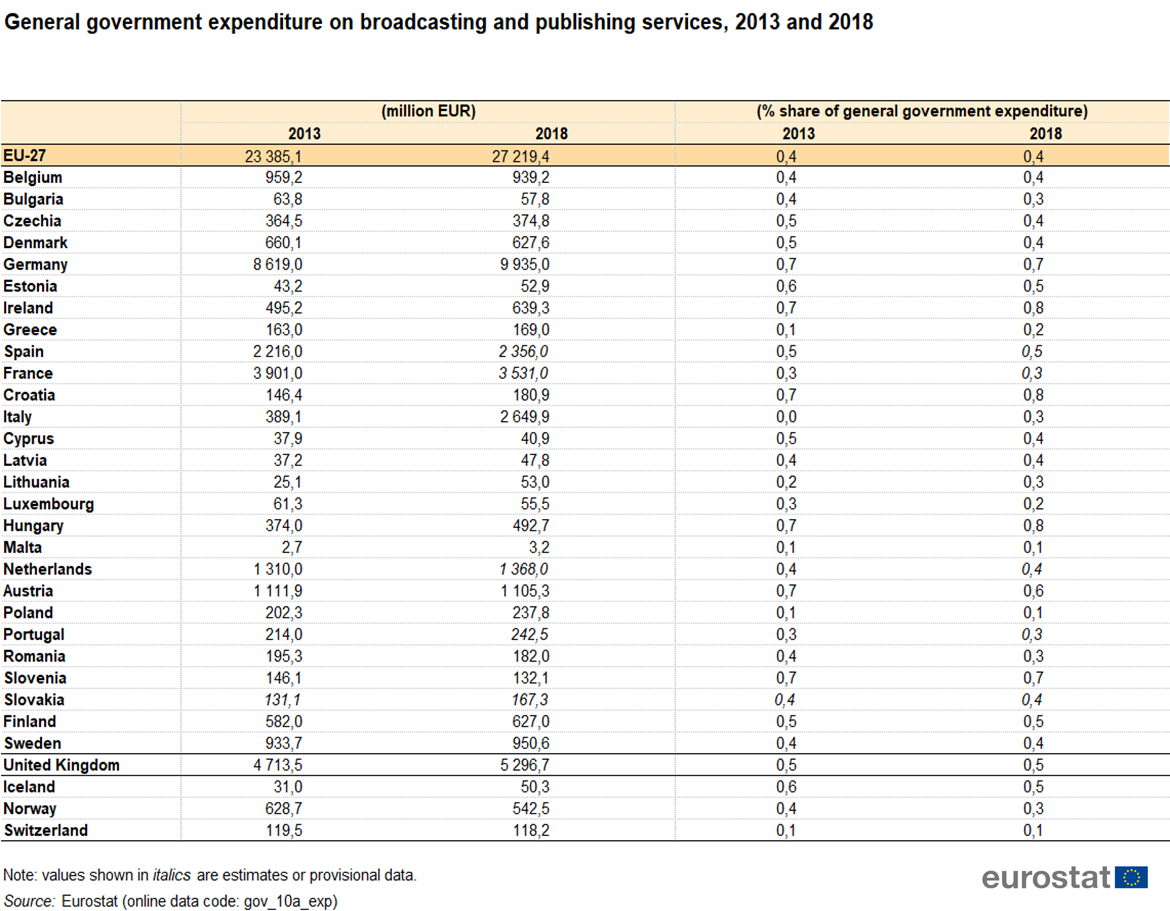 Government finance statistics are collected by Eurostat on the basis of the European System of Accounts (ESA 2010) transmission programme. EU Member States are requested to transmit, among other tables, table 1100 on the ‘Expenditure of general government by function’ 12 months after the end of the reference period. Table 1100 provides information about expenditure of the general government sector divided into main COFOG functions and ESA 2010 categories.

Classification of government expenditure by function

The classification of the functions of government (COFOG) has three levels of detail. At its most aggregate level it classifies government expenditure into 10 main functions (divisions or COFOG level I breakdowns): general public services; defence; public order and safety; economic affairs; environmental protection; housing and community affairs; health; recreation, culture and religion; education; social protection. These divisions may be further broken down into groups (COFOG level II) and classes (COFOG level III).

COFOG Division 08 for recreation, culture and religion consists of the following COFOG groups:

Among these six groups, cultural services and broadcasting and publishing services are those which account for a majority of culture-related government expenditure in the EU-27. Culture-related items cannot be distinguished in data for Groups 08.5 and 08.6.

Broadcasting and publishing services covered by COFOG Group 08.3 include:

Further information is available in Eurostat’s manual on sources and methods for the compilation of COFOG statistics — 2019 edition.