In 2021, there were 7.4 million people in cultural employment across the EU, 3.7% of total employment.

In 2021, employment in the cultural sector recorded the smallest ever gender gap, with 3.76 million men and 3.60 million women employed.

The analysis looks in detail at cultural employment according to various socio-economic aspects: age, sex, level of educational attainment, professional status and whether full- or part-time. The article closes with a focus on the employment characteristics of creative and performing artists, authors, journalists and linguists.

Cultural employment – developments between 2019 and 2021 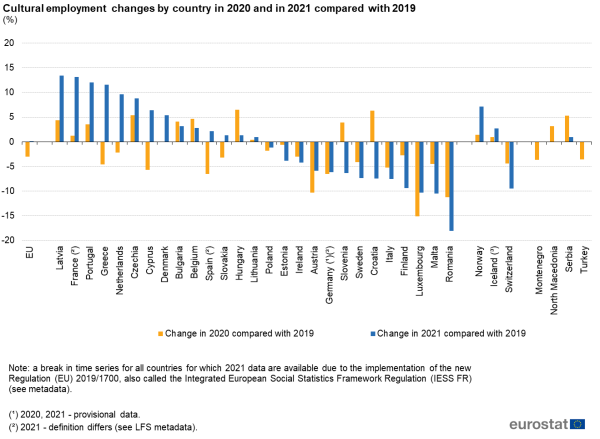 Due to the Covid-19 crisis, the total number of people employed in cultural professions in the EU fell significantly from 2019 to 2020, by about 222 000 people, equivalent to 3.0 %. In 2021, the overall number rose back to the 2019 value (see Table 1). At the EU aggregated level, this recovery is registered both in absolute numbers (the total number of people employed in the field) and in relative terms (cultural employment as a share of total employment). However, at country level the picture is different. The biggest increases in cultural employment between 2019 and 2021, expressed in absolute numbers, were recorded in France (up by 126 000 employees), the Netherlands (41 000) and Portugal (20 000). Conversely, the biggest falls were in Germany (down by 103 000 employees), Italy (63 000) and Romania (25 000). 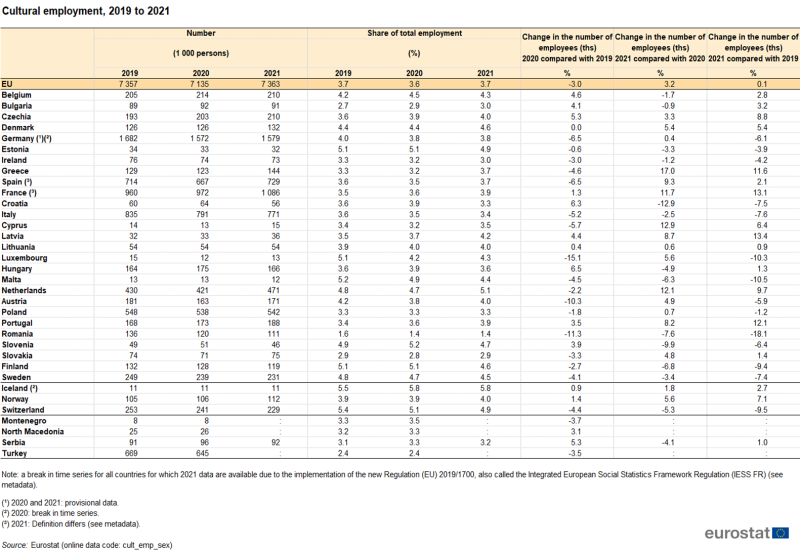 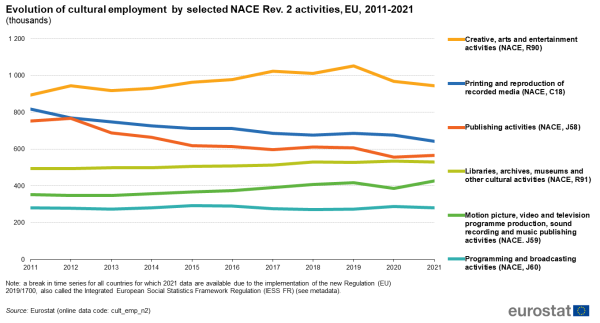 Characteristics of cultural employment in 2021

In 2021, the socio-demographic profile of cultural employment in the EU did not differ much from that of total employment when broken down by sex and age of employees. However, the differences were significant when it came to levels of educational attainment.

Cultural employment: tables and figures (these can be found in the shaded sheets at the end of the excel file).

Some other characteristics of cultural employment

The EU-LFS also provides information on additional socioeconomic characteristics that may be used to analyse cultural employment in more detail, including self-employment and working pattern (full-time and part-time employment).

Besides the high share of tertiary educated workers, cultural employment is also characterised by a relatively high proportion of self-employment. This reflects the independent and specialised nature of many occupations in the cultural sector — for example, authors, performing artists, musicians, painters and sculptors, or craftspeople.

In 2021, more than three quarters (77 %) of the cultural workers in the EU were employed on a full-time basis, four percentage points fewer than in the whole economy. This pattern can be seen in almost all EU countries, with the exception of Belgium, the Netherlands and Romania. The smaller proportion of people working full-time in culture-related professions could be explained, at least partly, by a number of cultural jobs being characterised by self-employment/freelancing and job flexibility. This situation may result, however, in job insecurity and considerable variations in income over time. The share of full-time employment in the cultural field varied considerably between countries, from 61 % in the Netherlands, to 95 % in Slovakia and 98 % in Romania. This wide range reflects more general differences between national labour markets (e.g. the importance of part-time work), rather than specific characteristics of cultural employment.

For two other indicators – employees with permanent positions and single jobs – only four countries showed a significant difference (of more than five percentage points) between cultural and total employment.

Concerning permanent jobs, differences of more than five percentage points were recorded in Malta (where 85 % of workers in culture-related professions had a permanent contract, while the average for the overall employment was 92 %), Greece (81 % vs 90 %) and France (76 % vs 85 %, the definition differs). For employees with only one job, a difference of more than five percentage points was recorded only in Austria, where 89 % of people employed in cultural professions held only one post, while the value for the entire national economy was 95 % (see Table 2). 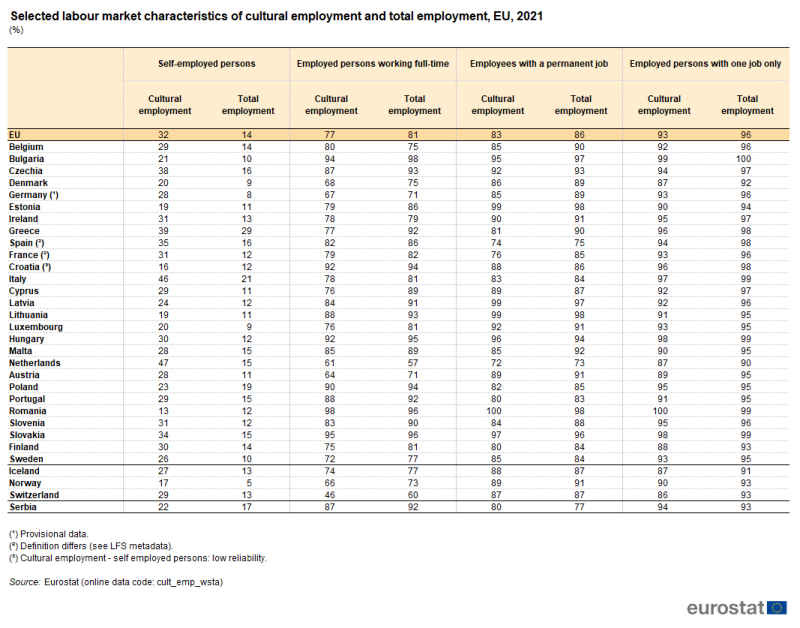 This final section presents information on the employment characteristics of two groups of cultural occupations (as distinguished in the ISCO-08 classification): creative and performing artists (including visual artists, musicians, dancers, actors, film directors, etc.) and authors, journalists and linguists. These two occupations are referred here as ’artists and writers’.

Beside their main job, some artists and writers have a second job. Across the EU, most people (96 %) in the overall employment held a single job in 2021. Artists and writers were less likely (91 %) to have just one job, and this pattern was repeated in all EU countries except Luxembourg. The share of artists and writers with just one job was more than ten percentage points below the level of the total economy in Malta, Austria, Portugal and Cyprus. In addition, with the lowest share among EU countries in 2021 (76 %), in Cyprus one artist or writer in four had more than one job. 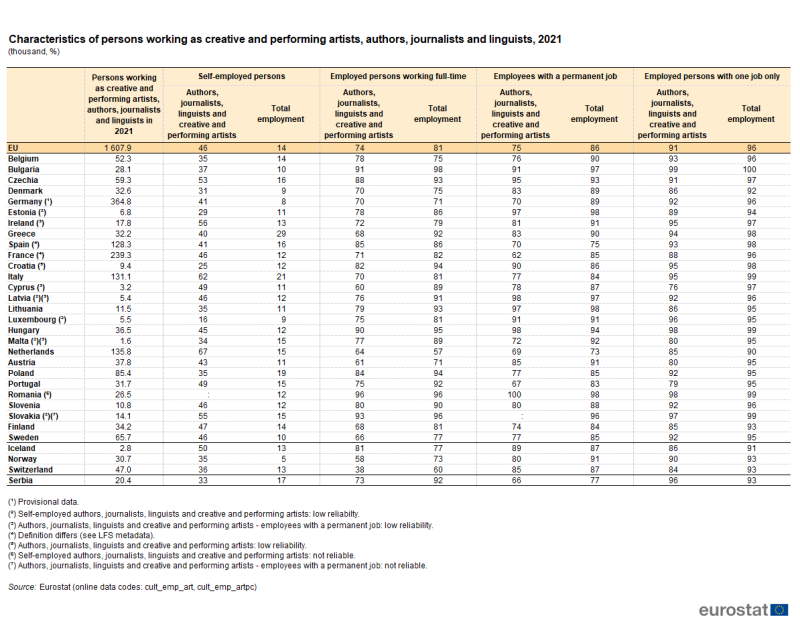 The statistical concept of cultural employment is based on the methodology proposed by the European Statistical System Network on Culture (see the ESSnet-Culture final report (2012)). 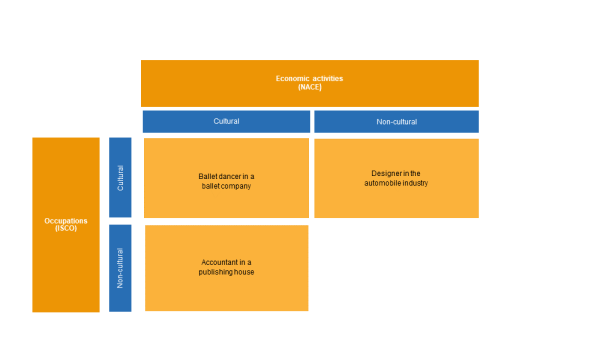 Eurostat’s statistics on cultural employment are sourced from the EU-LFS; the population covered by this survey concerns people aged 15 and over. Eurostat compiles data on cultural employment according to the field of economic activity in which the employed person works and their occupation, using a matrix to create an aggregate for all cultural employment. The data may be analysed at a more detailed level, for example, broken down by sex, age or by the level of educational attainment.

The two lists below contain the economic activities (NACE Rev. 2) and occupations (ISCO-08) used to calculate aggregates for cultural employment from the EU-LFS.

The EU-LFS requires data to be provided for NACE divisions (two-digit level) and for ISCO minor groups (three-digit level). However, the majority of countries provide more detailed data on a voluntary basis. For countries missing information at NACE three-digit level or/and ISCO four-digit level, the estimate is made using coefficients calculated for countries that provide the highest level of detail.

When estimating cultural employment, it is difficult to determine the proportion of some economic activities and occupations that is genuinely cultural. For this reason, activities and occupations which are only partially cultural were excluded from the estimates. For example, sports, recreation and cultural centre managers (ISCO Unit Group 1431) refers to an occupation with a cultural component; however, it is impossible to estimate the share specifically relating to culture. Therefore, and taking a conservative approach, it was decided to exclude this occupation (and other similar cases) when computing an aggregate for cultural employment.

Moreover, the EU-LFS collects (detailed enough) information on the economic activity and occupation only of the respondent’s main job and therefore omits information about secondary jobs (e.g. in the field of culture). Consequently, these secondary jobs are excluded from the aggregate covering cultural employment.

In view of these limitations and the approach adopted, data on cultural employment are likely to underestimate the true extent of employment in this field.

Regulation (EU) 2019/1700 came into force on 1 January 2021 and induced a break in the EU-LFS time series for several EU Member States. In order to monitor the evolution of employment and unemployment despite the break in the time series, Member States assessed the impact of the break in their country and computed impact factors or break corrected data for a set of indicators. Break corrected data are published for the LFS main indicators.

More information on the EU-LFS can be found via the online publication, which includes eight articles on the technical and methodological aspects of the survey. The EU-LFS methodology in force from the 2021 data collection onwards is described in methodology from 2021 onwards. Detailed information on coding lists, explanatory notes and classifications used over time can be found under documentation.

Culture is one of Europe’s greatest assets: it is a source of values, identity and a sense of belonging. It also contributes towards well-being, social cohesion and inclusion. The cultural and creative sectors also provide a stimulus for economic growth, job creation and international trade.

This is why culture is becoming more important in the EU. Article 167 of the Treaty on the Functioning of the European Union states that the EU ‘must contribute to the flowering of the cultures of the Member States, while respecting their national and regional diversity and at the same time bringing the common heritage to the fore’.

The EU supports these objectives through the Creative Europe programme, as well as a number of initiatives set out in the Work Plan for Culture (2015-2018) and the Work Plan for Culture (2019-2022). The 2019-2022 work plan, adopted by EU culture ministers in November 2018, sets out the main priorities for European cooperation in cultural policymaking:

The production of reliable, comparable and up-to-date cultural statistics, which provide a basis for sound cultural policymaking, is a cross-sectoral priority in the latest Work Plan for Culture. Eurostat compiles culture statistics from several different data collections to provide policymakers and other users with information on the main developments in the field of culture, covering issues such as education, employment, business, international trade, and participation and consumption patterns.