Impact of the COVID-19 crisis on EU construction - latest information 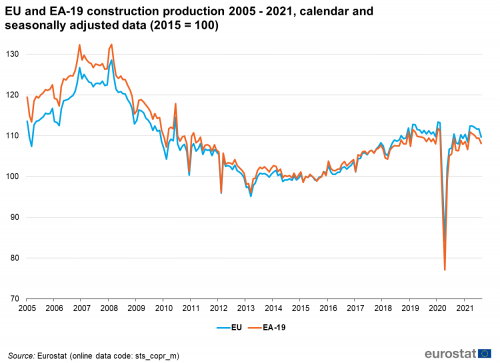 Until the end of 2006, construction output in Europe had increased rather steadily; but with the economic and financial crisis output began to decline quite dramatically. Between spring 2008 and early 2013, the level of total construction in the EU had been on a more or less constant decline (apart from a short peak in summer 2010). In total the index lost more than 30 percentage points. Since spring 2013 the index of construction production in the EU had been relatively steadily increasing and reached over 80 % of the former peak level. However, in March and April 2020, the index declined dramatically and lost almost 30 points in just two months. In May a recovery set in but the index levels are still only at a level which had already been reached in 2005. The development in the EA-19 is quite similar to the development of the EU. (Figure 1).

There are noticeable differences between the development of the construction of buildings (residential and non-residential), which accounts for around three quarters of total construction in the EU, and the development of the construction of civil engineering works (e.g. railways, roads, bridges, airport runways, dams). For the latter, the immediate effects of the financial and economic crisis were less marked than for the construction of buildings. However, in the years between 2010 and 2013 civil engineering also declined substantially. Since 2013, both areas show a relatively strong recovery which ended with the Covid-19 crisis in March 2020 (Figure 2). 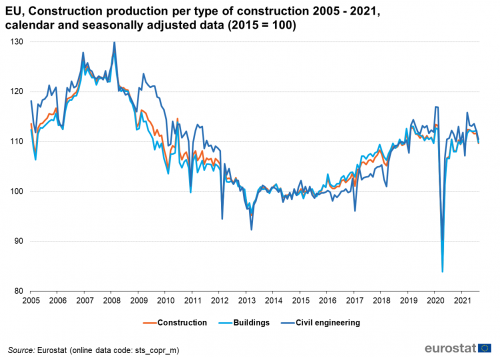 The financial and economic crisis in the building sector hit all EU countries albeit to a different extent. All countries experienced a decline in building production, ranging from an extreme reduction of -48.2 % in Lithuania in 2009 to stable activity levels in Germany and Luxembourg. In Poland the index of construction production even shows an increase of more than 4 % for this year. In several countries (e.g. Estonia, Ireland, Spain, Hungary, and Portugal) growth rates had already begun to move downwards before 2009, while in several other countries the drop in building activities happened in a more sudden way and was shorter (Table 1). For the EU as a whole, negative rates of change persevered during the years 2010 to 2013. During the last five years positive growth rates could again be registered for the EU construction. Mainly as a result of the Covid-19 pandemic and the resulting containment measures, construction activities dropped massively in 2020 (-5.0 % in the EU and -5.7 % in the euro area). A large majority of countries registered a negative rate of change. Some countries however grew during the year of the pandemic (Denmark, Germany, Croatia, Latvia, Malta, Romania and Finland). In Romania construction activities increased by 16.0 %. 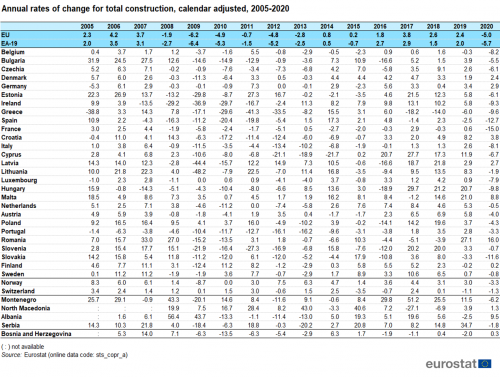 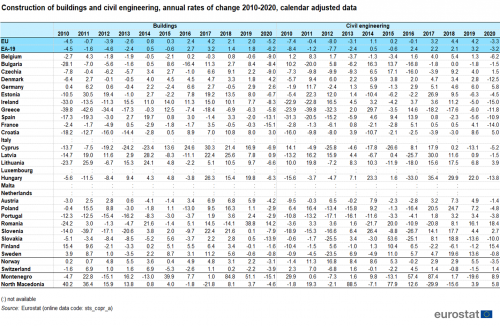 The obligation to transmit construction production data to Eurostat is laid down in Regulation (EU) No 2019/2152 of 27 November 2019 (European Business Statistics Regulation) and in the Commission Implementing Regulation (EU) No 2020/1197 of 30 July 2020. Like the industrial production index the construction production index is intended to reflect the monthly volume value added of the construction sector. This variable is however not directly observable and must therefore be approximated by other measures such as deflated gross production or input of labour and raw materials.

Eurostat publishes, on a monthly basis, the construction production index for the EU, for the euro area and the Member States; data are also collected for Norway, Switzerland, Montenegro, North Macedonia, Albania, Serbia, and Bosnia and Herzegovina (however there are no complete data series for all countries). Data are presented in calendar adjusted/ working-day adjusted and in seasonally adjusted form, rates of change are also available. Currently the indices for construction production are calculated with 2015 as the base year (=100).

The EU construction sector accounts for more than 5 % of (gross) value added. Although the relative share of construction in Europe's economic activity has declined over recent years construction is still of high importance for European economies. The indices for the development of construction output is therefore an important tool for the European Central Bank and the national central banks for monitoring and analysing economic developments. Production in construction is one of the so-called 'Principal European Economic Indicators (PEEI)' which are used to monitor and steer economic policy in the EU and in the euro area.