The indices for construction/building permits are business cycle indicators providing information on the development of granted building permits in the European Union (EU).

The building permit indices for the EU peaked in late 2006 / early 2007 and then began a continuous and rapid downturn which lasted 2 years. During the years 2010 and 2011 the index level remained relatively stable, in the following years it decreased again although by far not as dramatically as before. During the years 2015 to 2017 the index levels increased slightly. Since then the index levels have remained stable. In the summer of 2019 the level was still at the level to which it had dropped during the financial and economic crisis. In the first half of 2020, the index dropped again as a consequence of the Covid-19 crisis but by far not to the extent during the years 2007 – 2009. Since the last quarter of 2020 the building index recovered and is now again close to the pre-crisis level.

The development of building permits is rather heterogeneous at the level of the individual Member States. Between 2015 and 2019 the index for the number of new buildings increased in almost all Member States, the only exception being Luxembourg. The development was particularly strong in Ireland, Malta, Portugal, and Cyprus. In 2020 the building permit index for the number of buildings fell in the majority of Member States. The declines were however quite heterogeneous, ranging from -38.1% in Hungary to only -0.7% in Belgium and Lithuania. 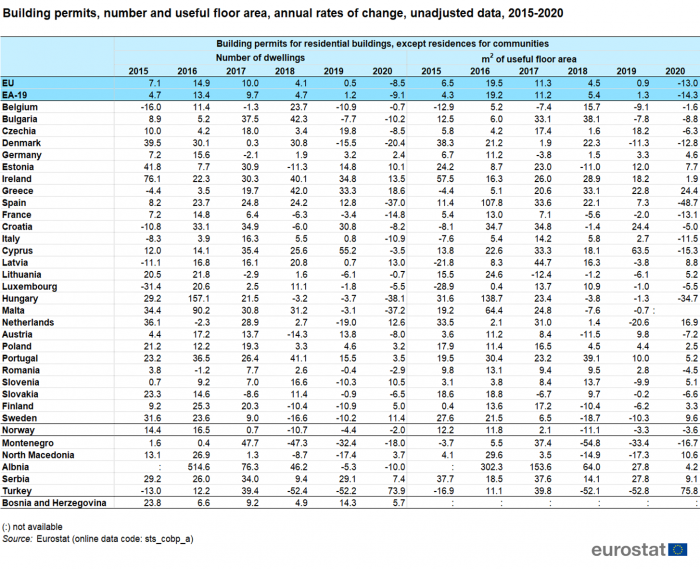 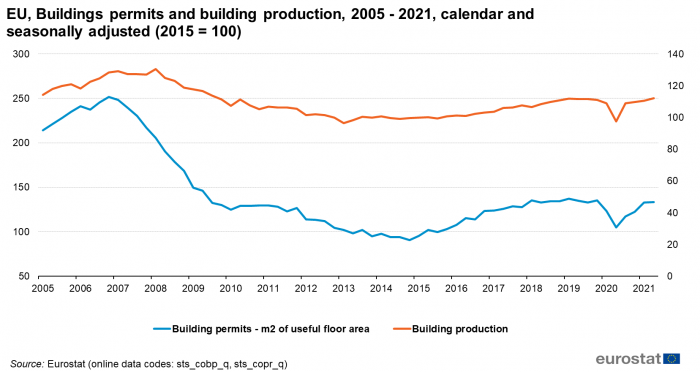 Information on building permits is generally collected from the authorities who issue the permits (often municipalities). As the collection of information is exhaustive, questions of sample sizes, weighting etc. do not apply. The mandatory reference period under Regulation (EU) No 2019/2152 of 27 November 2019 (European Business Statistics Regulation) is one quarter. Several Member States provide data on a monthly basis. The data are generally available 3 months after the end of the reference period.

The financial crisis of 2007 – 2010 which was triggered by the downturn of the US housing market and which resulted in substantial losses of construction output highlighted the need for more information on the housing market. The building permit indices were therefore integrated into the list of 'Principal European economic indicators' or 'PEEI' (together with residential property prices and house sales).