This is one of a set of statistical articles that forms Eurostat’s flagship publication Being young in Europe today. 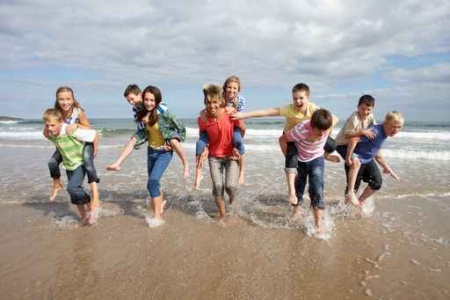 The EU is growing older …

The European Union (EU) is continuing to age and the share of children and young people in its population has been decreasing continuously over recent years. On 1 January 2019, the EU-27 population stood at 447 million people, of whom 142 million (or 31.8 %) were children or young people (aged 0-29 years). It is interesting to note that the number of elderly people (65 years and over) in the EU-27 has exceeded the number of children (0-14 years) since the start of 2004.

Although this ageing phenomenon has been recorded across the world’s industrialised societies, it has impacted the EU-27 population more than most others. There were however some differences between individual EU Member States. Whereas Ireland boasted a share of young people aged 0-29 years in its total population that stood at 39 %, some other Member States recorded shares that were much lower, for example around 28 % in Italy. The proportion of children and young people also varied significantly between regions within the EU. The proportion of children and young people in the EU-27’s population is projected to continue to decrease until 2052, and then to increase marginally through until 2080 (without returning to anywhere near the current share).

As a consequence, the median age of the EU-27 population has risen on average by more than three months each year over the last two decades. It stood at 38 years in 2000 and had grown to 44 years by 2019. This was the result of the combination of decreased fertility rates and increased life expectancy.

… while its families are developing and adapting to changes in society

In the EU-27, the share of households with children generally declined over recent years. Single-person households and couples without children made up the majority of households, although the shares varied between EU Member States.

The EU is a diverse entity, made up of different Member States with their own specific cultural characteristics and norms. Yet despite these differences, features common to all young people in the EU can be observed, such as a widespread pattern of delaying the transition into some aspects of adulthood. For example, young people tend to get married later in life than they used to. Furthermore, the proportion of babies born outside of marriage in the EU-27 increased over recent decades, while the age at which women had their first child was also deferred.

Despite these changes that young people in the EU-27 face or contribute to, adult life satisfaction in the EU-27 in 2018 was highest among the age group 16-24 years, with an average score of 7.8 (on a scale of 0 (low) to 10 (high)) for this age group compared with 7.3 for the whole adult population.

One of the EU’s main objectives is to improve the health inequality situation across Europe, although the general health situation of people in the EU-27 has been improving continuously over time. Today’s young people are expected to live longer than ever before, the result of a combination of economic development, better education, rising living standards, improved lifestyles and greater access to and quality of health services. Infant mortality rates in the EU-27 decreased by more than 90 % between 1961 and 2018.

As far as their self-perceived health status is concerned, the vast majority of young EU citizens rated it as good or very good. However differences according to gender and income levels were apparent. Generally speaking, the level of obesity within an age group increases with age, and so was less prevalent among young people. Nevertheless, 9 % of young people aged 25-34 years were obese in 2017, compared with an average of 15 % for all adults.

In an ever-more-competitive world economy, an efficient and dynamic education and training system plays an increasingly important role. Over the last few years, the EU has launched a series of initiatives aimed at helping the EU Member States achieve their goals in terms of better education. These range from the improved provision of childcare services to an increased number of places in university education.

Over the years, childcare has become more and more important to ensure that parents, in particular mothers, can more easily combine their private/family and professional lives. Although the availability of childcare facilities has generally increased throughout the EU, the situation was still very diverse among Member States. In 2018, almost half of all children under the age of three years in the EU-27 were cared for only by their parents and around one quarter of all children of this age were cared for, at least in part, by informal childcare.

One of the most important assets required to take advantage of the EU single market is language skills: generally, the more languages you speak, the more opportunities you have. Historically, several EU Member States have provided multilingual education to their pupils. However, some countries have been catching up. Broader language skills also make student mobility a much easier prospect (which is also encouraged through the Erasmus+ programme). Between 2013 and 2018 the number of pupils in primary schools learning two or more foreign languages rose most (in percentage point terms) in Spain and Finland.

The difficult transition to the labour market

Unemployment of young people turned into a major problem in some EU Member States in the aftermath of the global financial and economic crisis. However, the issue of youth unemployment remained an issue across the EU-27 in 2019, with 17 % of young people aged 25-29 years neither in employment nor in education and training. The unemployment rate of young people in the EU-27 increased greatly between 2008 and 2013 before decreasing in subsequent years, falling to levels that had last been recorded before the crisis. Nevertheless, 15 % of the labour force of young people aged 15-24 years remained unemployed in 2019. Young people were particularly likely to face long-term unemployment, especially in some of the southern EU Member States that were most impacted by the global crisis and the subsequent sovereign debt crisis.

Children’s lives in the EU — a mixed picture

Although most children (aged 0-17 years) in the EU-27 grow up in what might be broadly described as favourable conditions, nearly one out of every four were at risk of poverty and social exclusion in 2018. Children in certain EU Member States were more likely to be affected than others. The EU has addressed this issue through several initiatives including Recommendation 2013/112/EU on Investing in children — breaking the cycle of disadvantage. Out of all the forms of poverty and social inclusion, monetary poverty was the most widespread among children in the EU-27 in 2018.

The digital world — opportunities and challenges

In many ways, the digitalisation process is a two-sided coin: although it has revolutionised the way we live our daily lives, it has also opened up a new rift in society, the so-called digital divide. Access to the internet is now within almost everybody’s reach, provided they own or have access to a compatible device. However, the skills required to use the internet and access to high-speed internet services are not evenly distributed.

Within the EU, the presence of children in a household increases the likelihood that the household has internet access. In 2019, some 94 % of young people aged 16-29 years in the EU-27 accessed the internet on a daily basis, which was substantially more than the 77 % average for the whole (adult) population. The internet was increasingly accessed from mobile devices, such as smartphones, at the expense of computers. The highest proportion of young people using the internet on a daily basis was found amongst younger users and those with a higher level of formal education.

As enthusiastic users of digital devices, young people in the EU tended to be more likely to have ICT skills than the population as a whole. Data on young people generally indicated a broader use of the internet than among the general population: young people were more likely to carry out a wide array of activities ranging from online gaming to social networking and participating in civic activities. One of the challenges for the EU and its Member States is to combine the social and economic benefits from this early take-up of ICT by young people with the safe use of these innovative technologies by the most vulnerable members of society.