First of all, we need to understand what is meant by the word government.

The social security funds subsector includes certain units within the government, whose principal activity is to provide social benefits. Certain groups of the population are obliged by law or regulation to participate in the schemes or to pay contributions. These funds are managed by the general government in terms of fixing the contributions to be made and the benefits to be paid.
Common examples of social benefits are payments related to pensions and sickness.

What are government finance statistics?

Government finance statistics show the economic activities of government, including:

As such, government finance statistics are a bit like company accounts: they have a profit and loss account summarising income (revenue) and expenditure during a year or quarter and also a balance sheet at the beginning and the end of the year showing the company’s assets and liabilities.
The full name of the binding standards and methods used for compiling government finance statistics in the EU is the European system of national and regional accounts, referred to by its abbreviation ESA. These standards are updated regularly to reflect changes in the economy, such as financial developments. The latest version is called ESA 2010. Special manuals on government finance statistics referring to ESA 2010 are available on the Eurostat website where more detailed information can be found.

What can government finance statistics tell us?

Revenue includes different types of government revenue, for example from different types of taxes and social contributions. These statistics show how much of government revenue comes from income taxes of households, such as personal income taxes, how much from taxes on business profits, how much from wealth or inheritance taxes, how much from value added taxes (VAT), or how much comes from taxes on products like cigarettes, alcohol or petrol. Government revenue from taxes and social contributions is often shown relative to the size of the economy, in other words relative to gross domestic product (GDP). More information about GDP is available in another Statistics 4 beginners article. Apart from taxes and social contributions, governments also have - for example - revenue from dividends of public corporations, from interest income on its loan assets or from fines and penalties.

In 2016, taxes on personal income made up 55.2 % of all government revenue from taxes and social contributions in Denmark, but 7.4 % in Cyprus.
By contrast, taxes on profits of businesses accounted for 17.3 % of the total revenue in Cyprus, but 0.5 % of the total in Estonia.

Turning to government expenditure, the statistics can be analysed in two ways.

Firstly, they can be analysed by looking at the type of expenditure, for example payments to government employees (compensation of employees), interest (on debt), investment expenditure (gross capital formation), subsidies, social benefits or other expenditure.

Governments can invest in a large range of things, such as infrastructure or research and development, just to name a few.
In 2016, investment represented 5.8 % of government expenditure in the EU, ranging from 3.3 % in Portugal to 11.8 % in Estonia.

In the EU, interest payments represented 4.6 % of government expenditure, ranging from 0.1 % in Estonia to 9.3 % in Portugal.

Secondly, government expenditure can be analysed by looking at the purpose of the expenditure, based on the classification of the functions of government (COFOG); the broadest headings in this classification are shown in Box 2. The full detailed list is available here.

Box 2: Divisions of COFOG — classification of the functions of government

Click on the infographic here on the right to see the government expenditure for all the functions for the EU and all the Member States!

Assets and liabilities and government debt

How is the government deficit calculated?

Taking the total income and expenditure of government, it is possible to calculate the difference, which is either a surplus (if income is higher than expenditure) or a deficit (if expenditure is higher than income); the difference is also known as the public balance. An alternative way to look at this balance is to look at the consequence of having a surplus or a deficit: if there is a surplus the government has money to lend, while if it has a deficit it needs to borrow in order to cover all of its expenditure. As such, the surplus/deficit of the government sector is referred to as net lending/borrowing in national accounts.

For analysis, for example to make comparisons between countries easier, the value of the surplus or deficit is often compared with the value of GDP and is then shown as a percentage (% of GDP). See example below.

How is the government debt calculated?

Within the EU, the vast majority of government debt is in the form of debt securities, mainly bonds issued by governments. Bonds generally specify the level of interest that will be paid to the purchaser. They also specify the period of time after which the full value of the bond, its so-called face value, will be repaid: this period of time is known as its maturity.

Loans are when a government has simply borrowed money. Again, the loan will typically be for a period of time during which interest payments will be paid and at the end of this period the loan should be repaid in full. This might be a loan from another country, for example when a relatively developed country lends money to another country to help its development or simply for short-term adjustments of liquidity.

The main difference between loans and debt securities is that loans are said to be ‘non-negotiable’ whereas debt securities are ‘negotiable’. This means that the borrower and lender are generally fixed for the period of a loan as the loan generally cannot be traded from one lender to another. However, the purchaser of a debt security can sell the security to someone else before it reaches maturity.

Deposit liabilities of the central government are like accounts of financial institutions, such as banks, building societies, credit unions, or savings and loan associations. Deposits may be held in accounts from which the account holder can freely make payments or withdrawals, or they may be held in accounts where access is restricted, for example for a period of time.

As with the deficit, the value of the debt is often compared with the value of GDP and is then shown as a percentage (% of GDP). See example below. 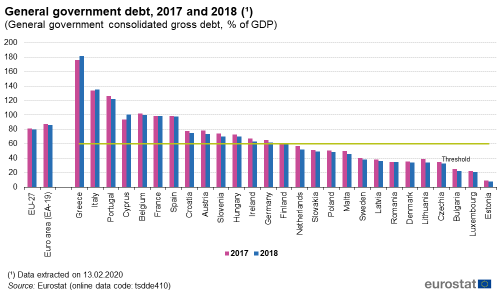 What have government finance statistics got to do with the euro and the convergence criteria?

A set of convergence criteria were established by the Maastricht Treaty, which laid down the conditions for the establishment of the euro. Countries wanting to join the euro area are obliged to meet these criteria and they should maintain their finances with respect to the criteria thereafter. There are two convergence criteria which relate to government finances, namely:

General gross government debt — in other words, how much a government has borrowed debt securities, loans and currency and deposits and not yet repaid — should not be above 60 % of GDP.

EU Member States regularly provide Eurostat with data relating to their surplus/deficit and debt for statistical verification and these statistics are then used within the European Commission’s excessive deficit procedure (EDP) to analyse budgetary discipline and respect of the convergence criteria. Eurostat releases the data in the form of news releases and these statistics are also presented in a Statistics Explained articles on Government finance statistics.