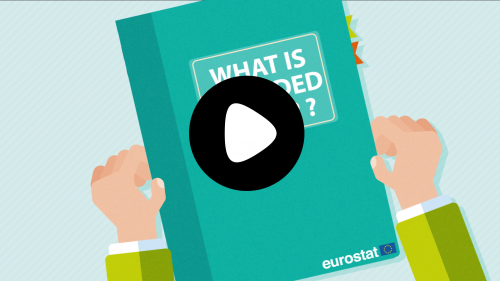 Watch the video explaining what is included in GDP

Gross domestic product (GDP) is the most commonly used measure for the size of an economy. GDP can be compiled for a country, a region (such as Tuscany in Italy or Burgundy in France), or for several countries combined, as in the case of the European Union (EU). The GDP is the total of all value added created in an economy. The value added means the value of goods and services that have been produced minus the value of the goods and services needed to produce them, the so called intermediate consumption. More about that in the article below.

Watch the video explaining what is included in GDP

The largest part of GDP is the value of all final goods and services which are produced to be sold (final means excluding intermediate consumption - see above).

No distinction is made whether the goods or services that are produced have a positive or negative impact from a social or environmental perspective. For example if there is an oil spill in the ocean, the transport of the oil as well as the cleaning work related to this is included in GDP.


GDP also includes the value of goods and services produced to be used as investments by the producers themselves.

Furthermore, GDP also includes all goods which are produced by households for own use.

Example If Kamila grows some crops at home, brews some beer or makes clothes or furniture — all for own use — this all contributes to GDP in her country.
In practice, this type of work tends to be very small in scale in developed economies and only some major categories will be surveyed or estimated for inclusion in GDP.

There are a few types of work that are not included in GDP and they mainly concern some types of services, such as housework, everyday domestic services and personal care.

Example When Alessandro is at home and cleans the house, cooks dinner, washes and irons clothes or babysits for his younger brothers or sisters, none of that contributes to GDP.
However, if he was paid to do any of those services for someone else, for example cleaning, cooking, ironing or babysitting in a hotel, this would contribute to GDP.

In fact all volunteer services — as opposed to the volunteer production of goods — are excluded, regardless of who benefits from the work, whether it is you and your family or an organisation, like a charitable or sports/youth organisation.

What about the black/grey or informal economy?

Unreported transactions, such as simply working illegally (not registered for tax and social security), are included in GDP through estimates.


An example would be cash payments to a cleaner whose work is not declared to the authorities. Estimates should also be made for illegal activities which involve monetary payment, such as buying counterfeit goods, smuggled cigarettes, prostitution and prohibited drugs.


Making these estimates for unreported transactions and illegal activities is not easy: more information can be found in a separate article.

So, what work does GDP not reflect?

When considering how big an economy is, or how it compares over time or with other economies, it should be remembered that there is no ‘right’ amount of GDP or of GDP growth. GDP growth does not necessarily go hand in hand with positive social or environmental development in an economy. This brings us to the next point … what GDP does not reflect.

It does not measure the social or environmental situation of an economy.
For many years, statisticians have worked on developing frameworks other than national accounts to look at these issues, for example surveys on income and living conditions and environmental accounts. As well as these frameworks there have been efforts by various organisations, statisticians, economists and other social scientists to produce indicators with broader measures than GDP, that reflect other issues, including for example happiness or well-being. Within Eurostat this work has been known as ‘GDP and beyond’. Elsewhere two of the best known examples are the United Nations´ human development index and the OECD’s better life index.

Does GDP have a family?

Example In an economy (called the host economy) there is a subsidiary of a foreign owned multinational enterprise. If that subsidiary transfers (repatriates) profits back to the home economy of the multinational enterprise, the repatriated profits will be included in the host economy’s GDP, but not in its GNI; on the other hand, the profits will be added to the home economy’s GNI, but not to its GDP.

The difference between GDP and GNI can be very large in some economies, for example in Ireland and Luxembourg. Both of these EU Member States host many multinational enterprises; a large number of people from neighbouring countries also cross the border to work in Luxembourg.

How can GDP be used as a benchmark?

As well as being useful for analysis in its own right, GDP can also be used as a reference for many other types of statistics.


For research and development

A common indicator when looking at the competitiveness of different economies is research and development (R&D) intensity, which is calculated as expenditure on R&D divided by GDP, expressed in percentage. R&D expenditure and GDP are both measured in euros, and so the resulting ratio is easy to compare across time and between countries. The EU’s R&D intensity in 2015 was 2.03 %, meaning that expenditure on R&D was equivalent to 2.03 % of GDP.

Another example is when considering how much money governments borrow or lend during a year and how much public debt (money the government owes) they have built up over time; these are often presented relative to GDP. In 2016, the government deficit (when government's expenditure is greater than its income) in the EU was 1.7 % of GDP, while the level of all outstanding debt was 83.5 % of GDP.


These are just two examples where GDP is used as a reference: there are many more cases.

National, regional and local governments/administrations, European institutions, central banks as well as other economic and social bodies in the public and private sectors need a set of comparable and reliable statistics about the economy in order to be able to develop different policies that are based on facts. The change of GDP over time is the most important indicator of economic growth.


The GDP is also used, for example, for deciding on the amount of money the EU regions receive from the EU’s structural funds, while the GNI of each EU Member State is used to determine how much each country pays to the EU’s budget.

More information on the various uses of national accounts in general and GDP in particular is provided in a separate article.