This article is part of Statistics 4 beginners, a section in Statistics Explained where indicators and concepts are explained in a simple way to make the world of statistics a bit easier for pupils and students as well as for everyone else with an interest in this topic.

What is the balance of payments?

The balance of payments is a transactions statement commonly known by the abbreviation BoP.

Balance of payments are organised into three types of accounts —current, capital and financial — all of which are explained below. In the BoP, the three accounts show the value of international transactions made during a period of time (such as during a month, a quarter or a year).

In its most basic form, the BoP data look at transactions with the rest of the world. However, a more detailed analysis can be made with individual countries or groups of countries. Collectively, these are referred to as ‘partners’.

For example, from the perspective of the European Union (EU) as a reporting economy, the partners might be other major national economies (such as the United States), other trading blocs (such as ASEAN), major financial centres (such as Hong Kong or other offshore financial centres), or simply the ‘rest of the world’.

For BoP data, the types of participants of particular interest are: i) various types of non-financial corporations; ii) general government; and iii) the rest of the economy and iv/ households and non-profit institutions serving households. These sectors are described in more detail later.

Would you like to know more about BoP, about the different kinds of accounts, and for what these data can be used?

What are the flows and the accounts? 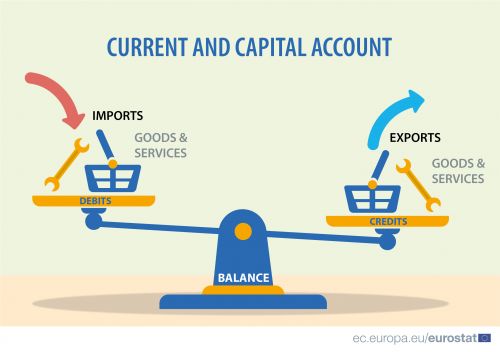 Recording of assets and liabilities

How are the accounts related?

Ideally (from a statistical perspective), the combined balance of the current and capital accounts should equal the net value of the financial account. If this does not happen, then the difference is recorded as the net value of errors and omissions.

Do you want to know more about what is actually in these accounts? At a more detailed level, each account is made up of many items. These are described in the next section.

What are the detailed items within the accounts?

The current account of the balance of payments provides information on:

As explained above, for all current account items a credit and a debit are recorded, as well as a balance. A positive current account balance shows that an economy is earning more from its international export transactions than its spending abroad from import transactions with other economies. It is therefore a net creditor (net exporter) towards the rest of the world.

Exports and imports of goods (international trade in goods) includes (among others):

International trade in services consists of the following items:

The capital account of the balance of payments provides information on:

The financial account is made up of five components (of which the first three are investments):

Where do remittances fit in?

Remittances represent an important source of external funding for households, in particular in developing countries. In the BoP data, international remittances are classified as primary income, secondary income or as capital transfers. Remittances cover:

For which partners are data available?

In theory, like for international trade, BoP data can be compiled for transactions between a particular economy (the reporting economy) and every individual country in the rest of the world (the partner economies).

In practice, in terms of reporting economies Eurostat publishes data for the EU-27, the euro area, each of the individual EU Member States and some non-member countries (such as EFTA and enlargement countries).

In addition, Eurostat publishes data for some individual countries as partners:

Finally, Eurostat publishes data for one special grouping of countries as a partner:

What are the sectors?

While many analyses of BoP data focus on the items and the partners, the data published by Eurostat also provide an analysis of the type of participants in international transactions. These distinguish both sides of a transaction, such as who is acquiring an asset and who is disposing of it.

The list below indicates the relatively detailed list of financial corporations, as well as general government and an aggregate of all other institutional sectors.

Who are the main users of BoP?

BoP statistics form the only available accounting framework which measures all types of international economic transactions.

BoP data may be used to study the international exposure of different parts of an economy, indicating comparative advantages and disadvantages with the rest of the world.

BoP data have traditionally been a fundamental macroeconomic tool for a wide range of users, such as governments, international organisations, financial and non-financial enterprises and researchers. These statistics are used by the European Central Bank for monetary policy, by the European Commission for economic policy and trade negotiations, and by national governments for analyses of various kinds.

What are the methods and sources?

Compiling and disseminating consistent and timely balance of payments is possible only by using internationally agreed methodological standards. The main methodological reference used for the production of balance of payment statistics is the sixth edition of the International Monetary Fund's (IMF's) Balance of Payments and International Investment Position Manual (BPM6) (click here for a link to the PDF). BPM6 was released in 2009 and in 2014 a compilation guide was released to assist compilers further. BPM6 is being reviewed and the release of BPM7 is targeted for March 2025.

The main sources of data

Each country compiles its BoP data from a combination of surveys and administrative sources. Methods used to collect and compile statistics differ from one item to another within a country and from one country to another.

Data are presented in national currencies and in euros.

What makes BoP difficult to compile?

The lifting of foreign exchange restrictions, the increasing number and complexity of cross-border financial transactions, and the integrated management of payments made by multinationals have led to increased challenges in the compilation of high-quality balance of payments data, particularly for the financial account and the related investment income.

Increased globalisation has brought several issues to greater prominence. An increasing number of individuals and businesses have connections to two or more economies and economies increasingly enter into economic arrangements.

Complex, multi-economy corporate structures with special legal structures that are used to hold assets but with little or no physical presence in an economy have become increasingly common. This often makes establishing the residence of the owners of goods, services and assets challenging.

Can BoP statistics be compared with other statistics?

Many types of statistics have links to BoP data or appear to overlap in some way. Two are mentioned below.

The introduction of the European System of Accounts 2010 (ESA2010) and the sixth edition of the BPM contributed to a harmonisation of methodological standards among the EU Member States. Consequently, there has been an increased level of comparability and consistency since 2014.

Discrepancies can still occur, for example from using different data sources in compilation, through a lack of coordination, or resulting from different interpretations of (harmonised) methodological standards. More complex items can result in greater discrepancies; discrepancies may also be greater or more frequent in some countries. Eurostat is systematically analysing these inconsistencies.

Like BoP statistics, international trade statistics cover an economy’s exports and imports of goods and services. Whereas BoP data are based on the BPM6, the compilation of statistics on the trade in goods is based on the United Nations manual of International Merchandise Trade Statistics (IMTS 2010).

The IMTS 2010 methodology is based on physical movements as a sufficient criterion to record cross-border transactions in goods, although it also recommends the use of the change of ownership criterion in exceptional cases. Furthermore, this methodology records an international transaction at the time point when the goods enter or leave an economic territory, rather than when ownership changes.

A further difference is how exports and imports are valued. While the cost (value) of the underlying goods being transported may be the same for BoP and statistics on trade in goods, related costs, such as transport and insurance charges are treated differently in these two statistics. This impacts the overall value of imports.

What is the legal basis for BoP statistics?