This article describes recent developments in relation to the number of asylum applicants in the European Union (EU). Asylum is a form of international protection given by a state on its territory. It is granted to a person who is unable to seek protection in their country of citizenship and/or residence, in particular for fear of being persecuted for reasons of race, religion, nationality, membership of a particular social group, or political opinion.

Number of asylum applicants: increase in 2021 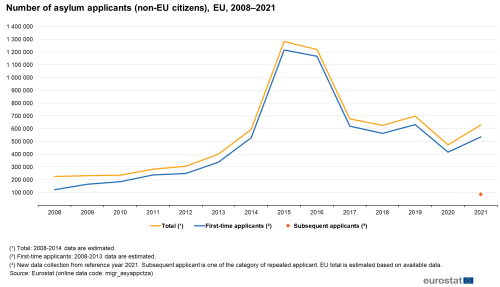 Additionally, starting from the reference year 2021, Eurostat collects statistics on subsequent applicants (people who reapplied for asylum after a decision had been taken on a previous application). According to available data (missing data for Denmark, Cyprus and Sweden), there were 86 500 subsequent asylum applicants recorded in the EU in 2021.

Syrians, Afghans and Iraqis lodged the most applications for asylum – together accounting for almost 40% of all first-time asylum applicants in EU Member States in 2021. 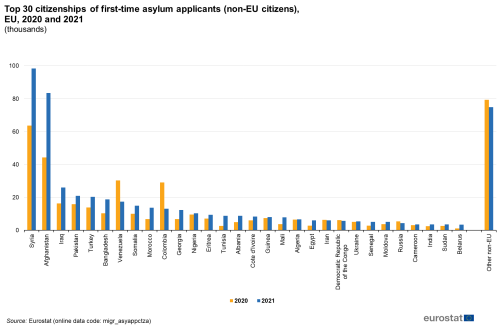 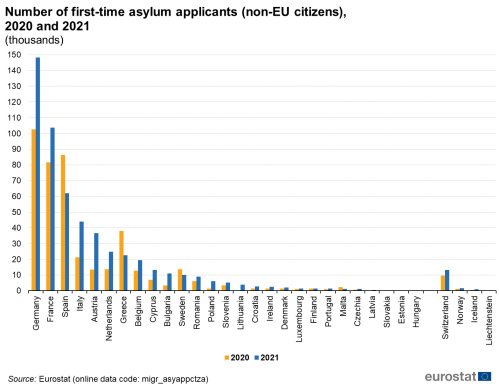 Table 1 provides an overview of the 5 largest groups of first-time asylum applicants (by citizenship) in each EU and EFTA country. 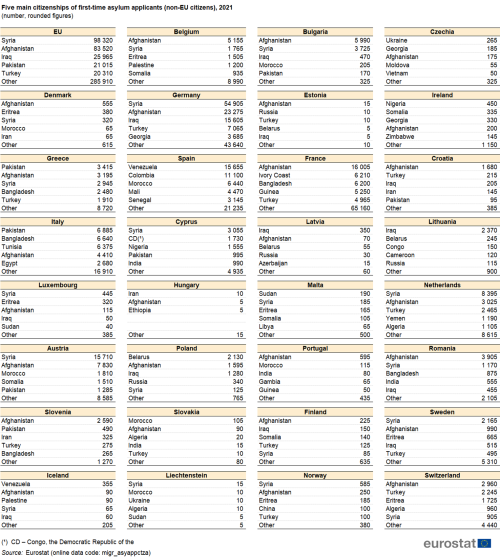 Age and sex of first-time applicants

This age distribution was common in almost all EU Member States, with the largest share of applicants aged 18–34. Only Germany, Croatia, Hungary and Sweden reported a higher proportion of applicants under 18. 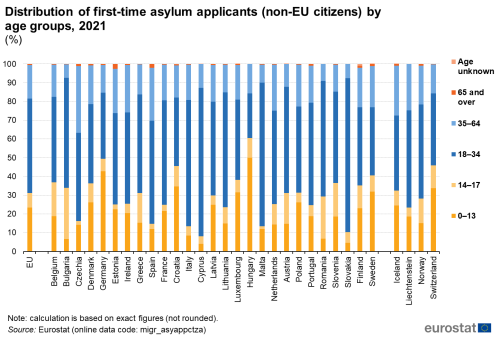 The only age group where female applicants were a majority in 2021 was 65 and over – although this accounts for just 0.6% of the total number of first-time applicants. 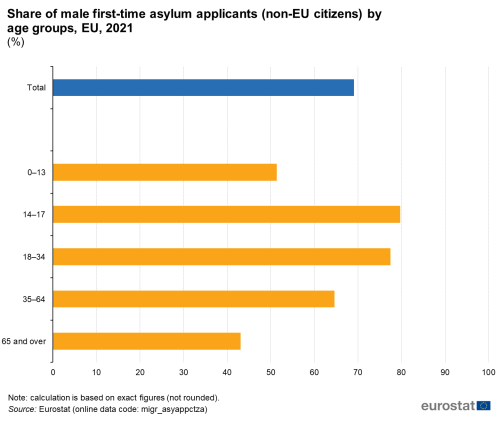 An unaccompanied minor is a person under 18 who arrives on the territory of an EU Member State without an accompanying responsible adult, or who is left unaccompanied after arrival. 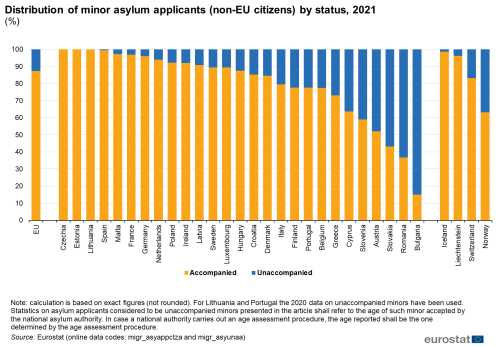 Data on decisions on asylum applications are available for 2 stages in the process: first instance decisions (initial decisions) and final decisions taken on appeal or review. 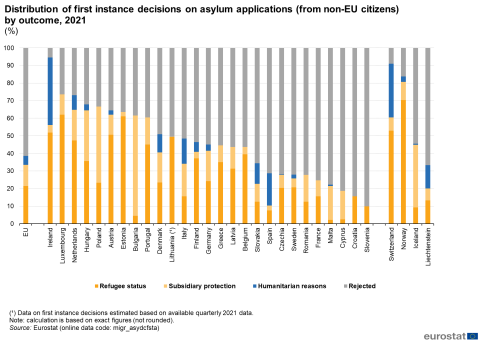 In absolute terms, at first instance in the EU in 2021: 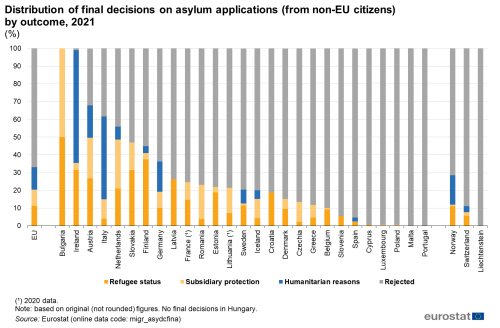 Decisions on applications by unaccompanied minors

In 2021, based on available data, 6 900 first instance decisions on asylum applications by unaccompanied minors were made in EU Member States and a further 1 200 final decisions following an appeal or review. 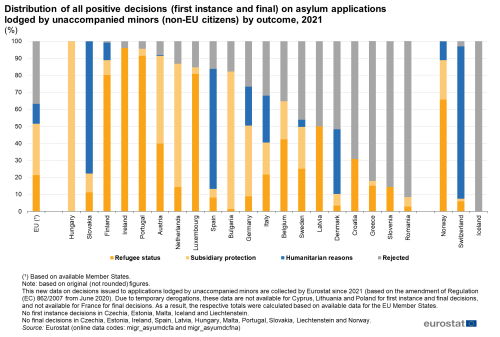 Pending applications at the end of 2021

Pending applications for international protection are applications that have been made at any time and are still under consideration by the national authorities at the end of the reference period.

In other words, they refer to the number of asylum seekers waiting for a decision at the end of the year. This statistic is also intended to measure how national authorities are coping with the workload associated with processing new applications. 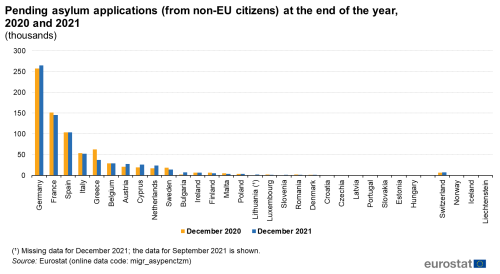 Figure 11: Pending asylum applications (from non-EU citizens) at the end of the year, 2020 and 2021
(thousands)
Source: Eurostat (migr_asypenctzm)

Eurostat produces statistics on a range of issues relating to international migration. Between 1986 and 2007, data on asylum was collected on the basis of a gentlemen’s agreement. Since 2008 data have been provided to Eurostat under the provisions of Article 4 of Regulation (EC) No 862/2007.

Since the entry into force of Regulation (EC) No 862/2007, statistics on asylum decisions have become available for different stages of the asylum procedure. First instance decisions are decisions granted by the respective authority acting as a first instance of the administrative/judicial asylum procedure in the receiving country. In contrast, final decisions in appeal or review relate to decisions granted at the final instance of administrative/judicial asylum procedure and which result from an appeal lodged by an asylum seeker rejected in the preceding stage. Since asylum procedures and the number/levels of decision making bodies differ among the EU Member States, the true final instance may be, according to the national legislation and administrative procedures, a decision of the highest national court. However, the applied methodology defines that final decisions should refer to what is effectively a final decision in the vast majority of cases: in other words, once all normal routes of appeal have been exhausted and there is no possibility to appeal on the substance of the decision but only on procedural grounds.

A number of directives in this area have been developed. The four main legal instruments on asylum are:

In April 2016, the European Commission adopted a Communication (COM(2016) 197 final) launching the process for a reform of the CEAS. This included options for a fair and sustainable system for allocating asylum applicants among EU Member States, a further harmonisation of asylum procedures and standards to create a level playing field across the EU and thereby reduce pull factors inducing irregular secondary movements, and a strengthening of the mandate of the European Union Agency for Asylum (EUAA).

On 4 March 2022, the Council unanimously adopted an implementing decision introducing temporary protection due to the mass inflow of persons fleeing Ukraine as a consequence of Russia's invasion.

It applies when there is a risk that the standard asylum system is struggling to cope with demand stemming from a mass inflow, risking a negative impact on the processing of claims.

Requirements for reporting such statistics already exist in Article 4(1)(c) and 4(3)(e) of Regulation (EC) No 862/2007. They will be implemented for the first time with the transmission of data on international protection as follows:

However, in order to respond to emerging data needs, in April 2022 Eurostat proposed a voluntary collection of more frequent and timely, in terms of data provisions, statistics on temporary protection starting from reference month March 2022. The following data will be collected on a monthly basis with a deadline for provision set within one month since the end of reference period:

This data is usually compiled and transmitted to Eurostat by national ministries of the interior and/or immigration agencies.

The data on temporary protection for the first quarter of 2022 will be released by Eurostat in June 2022.