This article describes recent developments in relation to the number of asylum applicants in the European Union (EU). Asylum is a form of international protection given by a state on its territory. It is granted to a person who is unable to seek protection in his/her country of citizenship and/or residence, in particular for fear of being persecuted for reasons of race, religion, nationality, membership of a particular social group, or political opinion.

The legal basis of the asylum data collection is Council Regulation (EC) No 862/2007. The amendment of this regulation adopted in June 2020 introduced additional new statistics and disaggregations. In addition, from the reference year 2021, Eurostat started to collect statistics on unaccompanied minors (subject to asylum applications, decisions at first instance and final decisions on appeal), on subsequent asylum applicants, on asylum applications under accelerated procedure, on applicants benefiting from material reception conditions and on types of withdrawal of asylum applications. Some of these new data are already presented in this article. In accordance with the amended Regulation, Member States could apply for specific derogations to provide new statistics for a period of up to three years. A complete list of such derogations is provided in the Commission Implementing Decision (EU) 2021/431. Due to the requested derogations, the new statistics are not yet complete for all Member States.

Due to the COVID-19 pandemic, and the related introduction of movement restrictions and border closures, some countries applied administrative measures (e.g. temporary closure of asylum authorities, suspension of asylum interviews, suspension of lodging applications), which resulted in a drop in the number of asylum applications as well as in the number of decisions issued, starting from March 2020. This can directly impact the growth rates when comparing data between 2021 and 2020, therefore data should be interpreted with caution.

Main trends in the number of asylum applicants

Where do asylum applicants come from?

Citizens of 138 countries, as well as stateless persons, sought asylum for the first time in the EU in October to December 2021. Syrian, Afghan and Iraqi were the top 3 citizenships of asylum seekers, lodging 31 500, 29 700 and 10 100 applications respectively (see Table 1). 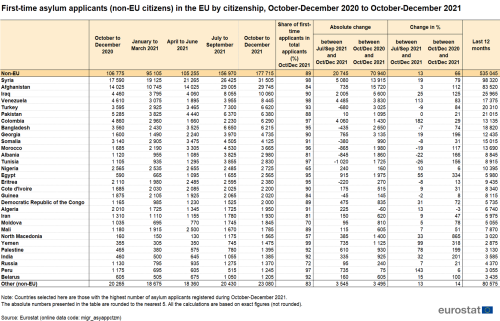 The most substantial relative increase in the number of asylum applicants in the EU in October to December 2021, compared with the same period of 2020, was recorded for citizens of the Republic of North Macedonia, followed by Egyptians and Yemenites (see Figure 2, Table 1). 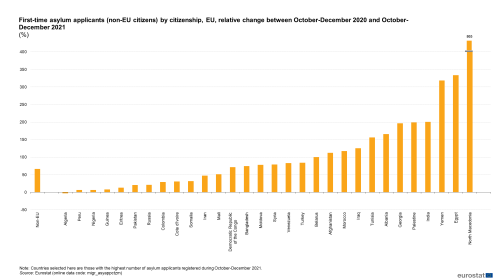 Where do asylum applicants go to? 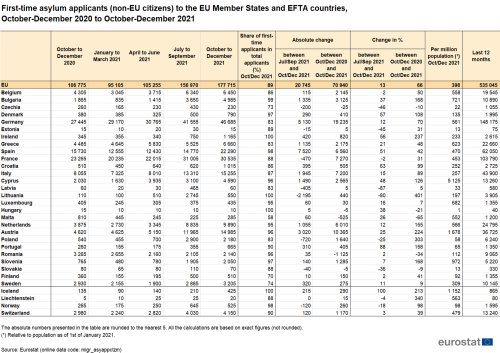 In October to December 2021, Afghan was the main citizenship of asylum seekers in eight EU Member States, Syrian in six and Iraqi in two (see Table 3). Of the Afghans who applied for first time for asylum in the EU in the third quarter of 2021, 27 % were registered in Germany. Germany was also the main receiving country for Syrian (44% of all Syrians) and Iraqi asylum applicants (69 % of all Iraqis) (see Table 4). 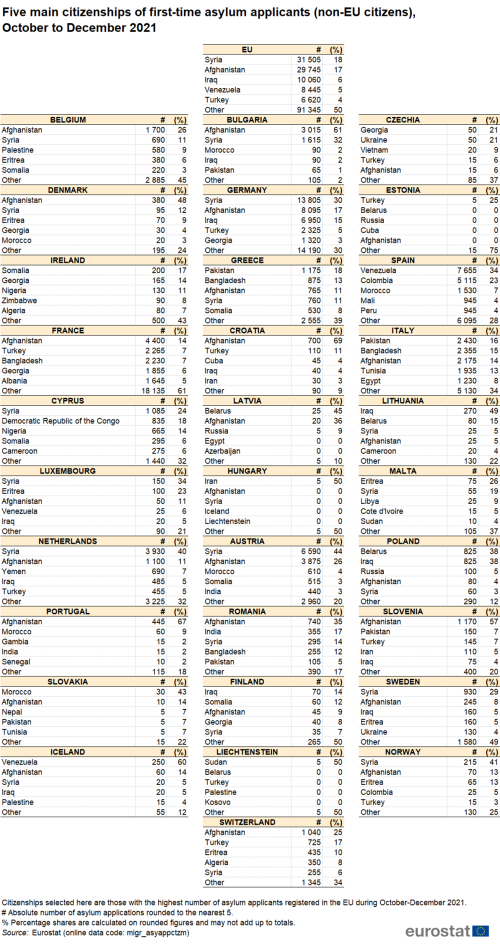 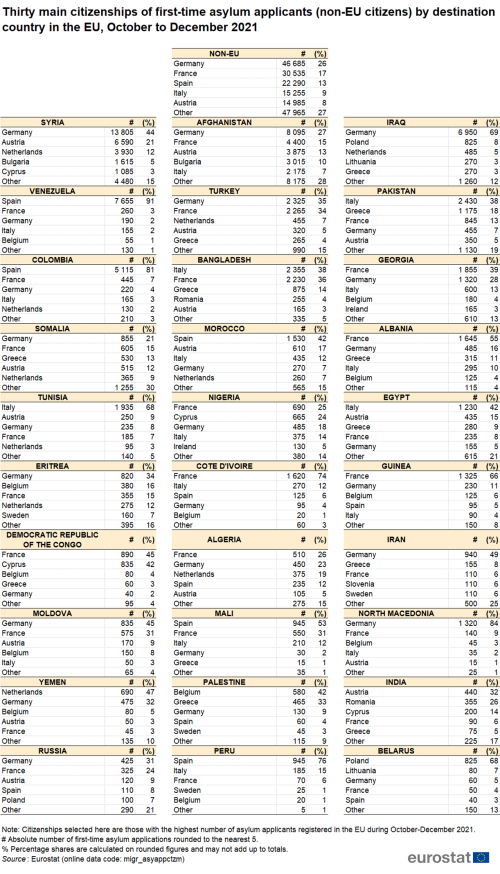 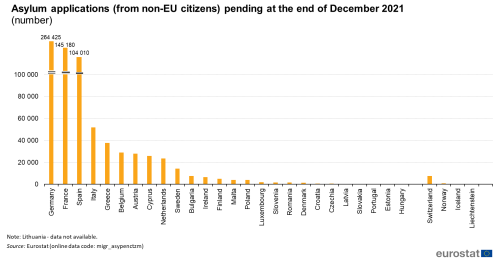 In October to December 2021, according to the available monthly data, the highest number of unaccompanied minors was registered in Austria (2 700), followed by Bulgaria (1 400) and Belgium and Germany (1 100 each) (see Figure 6).

The data used for this publication are provided to Eurostat by the interior and justice ministries or immigration agencies of the Member States and EFTA countries. Data on asylum applications are collected monthly. They are based entirely on relevant administrative sources and supplied in accordance with the provisions of Article 4 of the Regulation (EC) No 862/2007 of 11 July 2007 on Community statistics on migration and international protection. All data presented in this publication are rounded to the nearest 5, and are provisional (except where otherwise stated) and may be subject to change.

The Directorate-General Migration and Home Affairs (DG HOME) is responsible for developing EU policies on asylum.

The 1951 Geneva Convention relating to the status of refugees (as amended by the 1967 New York Protocol) has, for over 60 years, defined who is a refugee, and laid down a common approach towards refugees that has been one of the cornerstones for the development of a common asylum system within the EU.

Since 1999, the EU has been working towards creating a common European asylum regime in accordance with the Geneva Convention and other applicable international instruments. A number of directives in this area have been developed. The four main legal instruments on asylum are:

In May 2010, the European Commission presented an action plan for unaccompanied minors (COM(2010) 213 final), who are regarded as the most exposed and vulnerable victims of migration. This plan aims to set up a coordinated approach and commits all EU Member States to grant high standards of reception, protection and integration for unaccompanied minors.

In December 2011, the European Commission adopted a Communication on ‘Enhanced intra-EU solidarity in the field of asylum’ (COM(2011) 835 final). This provided proposals to reinforce practical, technical and financial cooperation, moving towards a better allocation of responsibilities and improved governance of the asylum system in the EU, namely through:

On 4 March 2022, the Council unanimously adopted the implementing decision introducing temporary protection due to the mass influx of persons fleeing Ukraine as a consequence of the war. The activated Temporary Protection Directive provides special procedures to deal with mass influxes of displaced persons for the first time. Temporary protection is an exceptional measure to provide immediate and temporary protection to displaced persons from non-EU countries and those unable to return to their country of origin. It applies when there is a risk that the standard asylum system is struggling to cope with demand stemming from a mass influx risking a negative impact on the processing of claims. Requirements for reporting such statistics already exist in Article 4(1)(c) and 4(3)(e) of Regulation (EC) No 862/2007. Practically, they shall be implemented for the first time with the transmission of data on international protection as follows: quarterly data for the first quarter of 2022 are due by 31 May 2022 and annual data for the year 2022 - by 31 March 2023. The data on temporary protection for the first quarter of 2022 will be released by Eurostat in June 2022.