Data from April and May 2016. No planned update.

Highlights
Tweet
Public expenditure on education was above 7 % of GDP in Sweden, New Zealand, Finland and Cyprus in 2013.
Tweet
Most graduates from tertiary education aged 20-29 in New Zealand, Ireland and Australia in 2014. 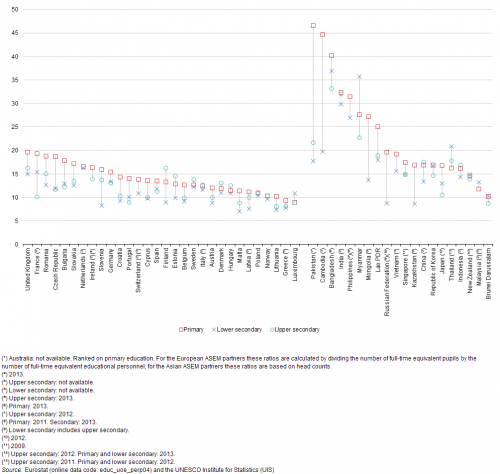 It focuses on education data about the European Union (EU), Norway and Switzerland in comparison with 21 Asian ASEM partners and covers key indicators concerning expenditure on education, the number of pupils and students, school life and tertiary education.

Comparisons between countries relating to levels of public expenditure on education are influenced by differences in price levels and by the number of students; it is important to note that some countries have sizeable private education sectors too. In relative terms, public expenditure on education was highest among the ASEM partners in 2012 or 2013 in Sweden, New Zealand, Finland, Cyprus and Malta, where it was close to or above 7.0 % of gross domestic product (GDP), as can be seen in Figure 1. The lowest public expenditure relative to GDP was recorded in Bangladesh, Pakistan, Romania, Kazakhstan and Singapore, all below 3.0 %. 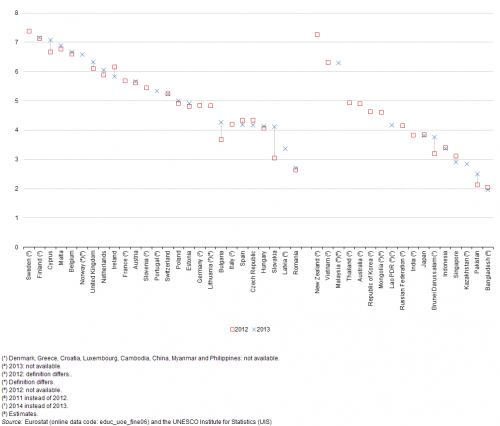 Figure 1: Government/public expenditure on education, 2012 and 2013 (1)
(% of gross domestic product)
Source: Eurostat (educ_uoe_fine06) and the UNESCO Institute for Statistics (UIS) 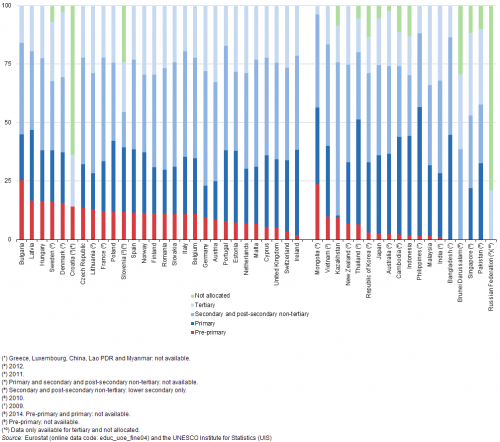 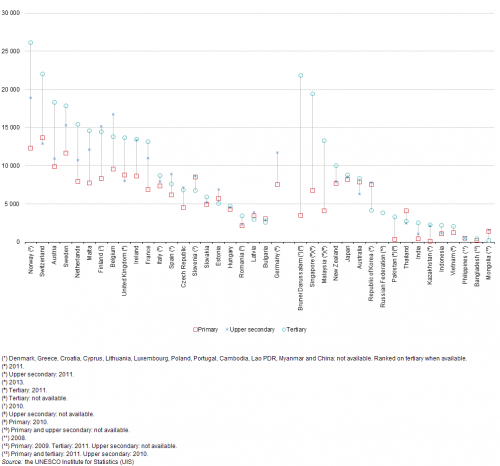 The level of educational enrolment depends on a wide range of factors, such as the age structure of the population, legal requirements concerning the start and end (or duration) of compulsory education, the availability of educational resources and the demand for secondary and tertiary education. 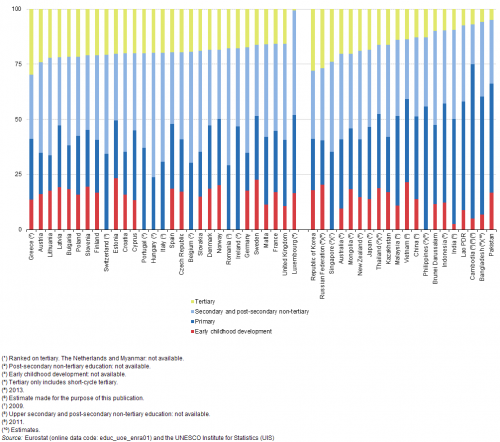 Comparing the division of pupils/students by education level, the main difference between European and Asian ASEM partners was the higher proportion of primary education students in Asian ASEM partners, particularly in ASEAN members, most notably Cambodia in 2011 (see Figure 4). Within NESA there were different situations: the distribution of pupils/students by educational level in the Republic of Korea, the Russian Federation, Australia, Mongolia, New Zealand and Japan was broadly similar to that observed in most of the EU Member States; China and India had similar structures with a relatively high share of primary pupils, which influenced greatly the NESA average; Bangladesh and Pakistan had even higher proportions of pupils in primary education. Among the ASEAN members, Singapore and Brunei Darussalam were the only countries where the combined share of early childhood development and primary education was below 50 %, as it was in nearly all of the EU Member States.

Figure 5 shows the pupil-teacher ratio for primary, lower secondary and upper secondary education: for the European ASEM partners these ratios are calculated by dividing the number of full-time equivalent pupils by the number of full-time equivalent educational personnel; for the Asian ASEM partners they are based on head counts.

Universities and other higher education institutions provide tertiary education. Figure 6 provides an analysis of the number of graduates from tertiary education in 2014 relative to the population aged 20–29. This ratio varied more among the Asian ASEM partners than among the European ASEM partners, with the highest ratios — in New Zealand (2012 data) and Australia (2011 data) — ten times as high as the lowest ratios — in Bangladesh (2012 data) and Cambodia (2011 data). 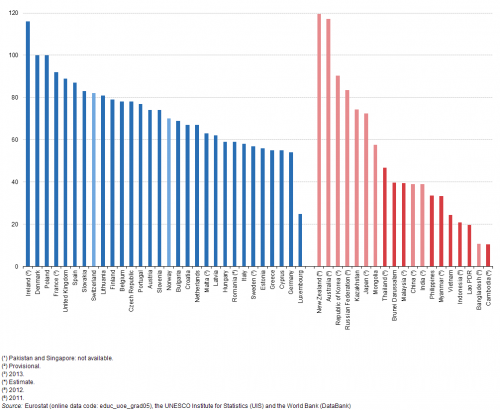 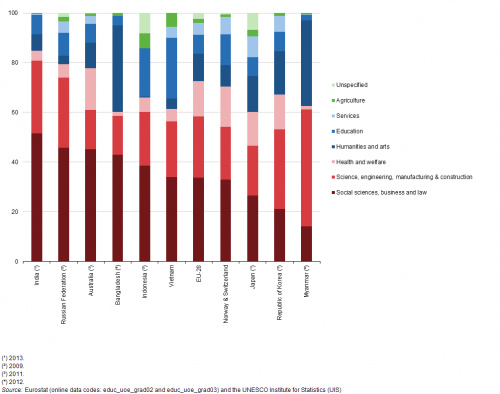 Figure 7: Tertiary graduates by field of study, selected ASEM partners, 2014
(% of all graduates)
Source: Eurostat (educ_uoe_grad02) and (educ_uoe_grad03) and the UNESCO Institute for Statistics (UIS)

The standards for international statistics on education are set by three international organisations: the Institute for Statistics of the United Nations Educational, Scientific and Cultural Organisation; the OECD; and Eurostat.

The indicators presented are often compiled according to international — sometimes global — standards. Although most data are based on international concepts and definitions there may be certain discrepancies in the methods used to compile the data.

Almost all of the indicators presented for the EU (and its Member States), Norway and Switzerland have been drawn from Eurobase, Eurostat’s online database. In exceptional cases some indicators for the EU have been extracted from international sources.

For the Asian ASEM partners and their aggregates (ASEAN and NESA), the data presented have been extracted from the World Bank and the UNESCO Institute for Statistics (UIS).

For many of the indicators, multiple international statistical sources are available, each with their own policies and practices concerning data management (for example, concerning data validation, the correction of errors, the estimation of missing data, and the frequency of updating). In general, attempts have been made to use only one source for each indicator in order to provide a comparable analysis between the partners.

Aggregates for ASEM, the European ASEM partners and the Asian ASEM partners have been compiled from the data for individual partners as indicated above. As such, they may combine data from Eurostat and international sources.

Education is regarded as providing a wealth of benefits, such as supporting economic growth, contributing to the personal and social development of pupils and students and helping to reduce inequalities.

Pupils and students enrolled by education level, sex, type of institution and intensity of participation (educ_uoe_enra01)