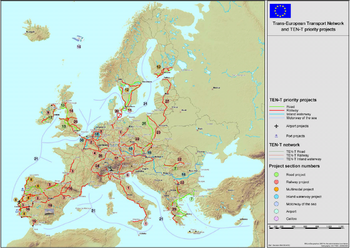 Rome wasn't built in a day. And it would have taken much longer had it not been for the Empire's extensive road network and maritime routes which stretched out to many parts of today's Europe. Likewise, but of course for different reasons, if the EU is to become a success with a thriving economy, goods and people need to be able to circulate rapidly and easily between Member States, and even beyond. This has become all the more important given the recent and future waves of enlargement, especially as the connections between the old and new Member States are sometimes especially wanting.

This is where the transport dimension of the EU's Trans-European networks (TENs) comes into play: 'TEN-T' for short. Made Community policy over a decade ago with the Maastricht Treaty, 'TEN-T' aims to improve economic and social cohesion, by linking island, landlocked and peripheral regions with the Union's more central regions, through interconnecting and interoperable national networks by land, air, sea and inland waterways, including Galileo, the European satellite navigating system (see below).

According with these objectives, the Community develops guidelines covering the objectives, priorities, identification of projects of common European interest and broad lines of measures. There are currently 30 infrastructure projects (Decision 884/2004/EC), which are outlined below.

A specific novelty concerns the development of 'motorways of the sea' which has intermodality at its heart. Its aim is to foster integrated intermodal options, based on short sea shipping, providing frequent, high-quality alternatives to road transport. In time, the goal is to develop a network of motorways of the sea between different European regions, each linked to inland modes of transport. In this way, the vast transport potential of European seas and waterways can be more effectively tapped.

Completing the network by 2020 involves the construction of the so-called 'missing links', and increasing the existing road and rail networks. This will have a huge impact in reducing journey time for passengers and goods. A 2004 study for the Commission indicated that significant time savings would be gained from the completion of the 30 priority axes/projects which form the 'backbone' of TEN-T, through a substantial reduction in road congestion and improved rail performance.

Given that freight transport between Member States is expected to show the largest increase overall, without TEN-T, this increase in transport would be very hard to handle, with possible effects on economic growth. Moreover, completing the networks will also bring important dividends for the environment, notably by reducing the amount of CO2 emissions expected from transport in 2020.

Growing beyond the EU

The new European map that rolled out following the EU's most unprecedented enlargement in 2004 seems to have served as a wake-up call for EU leaders: part of the EU's success depends on how it gets on with its neighbours. In addition to acceding and candidate countries, these include notably countries around the Mediterranean, Russia, Ukraine, Belarus, and Moldova and with Armenia, Azerbaijan and Georgia.

This growing external awareness found concrete form in the Communication COM(2004) 373 final 12.5.2004 from the Commission 'European Neighbourhood Policy' and more specifically in the report 'Networks for peace and development: Extension of the major trans-European transport axes to the neighbouring countries and regions' (Report from the High Level Group chaired by ex-transport commissioner Loyola de Palacio). This report made a number of recommendations including a mix of infrastructure projects and simpler measures aiming to stimulate trade and facilitate traffic flows between countries along five major transnational transport axes connecting the EU with the neighbouring countries in the North, East and South-East as well as around the Mediterranean and Black Sea regions. Better integration of national networks, according to the authors, will foster regional cooperation and integration not only between the EU and its neighbours but also between the neighbouring countries themselves.