Archive:Structure of agriculture in Croatia

This article presents some statistics from the most recent Farm structure survey (FSS) conducted in Croatia in 2010. On 1 July 2013, Croatia became the 28th and latest Member State to join the European Union (EU). This special focus throws the spotlight on structural aspects of agriculture in the newest Member State.

Once every 10 years an agricultural census is conducted in the EU, with intermediate sample surveys (farm structure surveys) carried out two or three times between two censuses. These censuses and intermediate surveys collect a range of information about agricultural holdings (farms), covering land use, farm management, the farm labour force and livestock numbers, as well as issues related to rural development. Ahead of its accession to the EU, Croatia conducted both a 2007 farm structure survey (FSS) and a 2010 survey. Unlike the EU-27 Member States, for whom the farm structure survey in 2010 was carried out as a census, Croatia carried out a sample survey; this article presents some selected results. 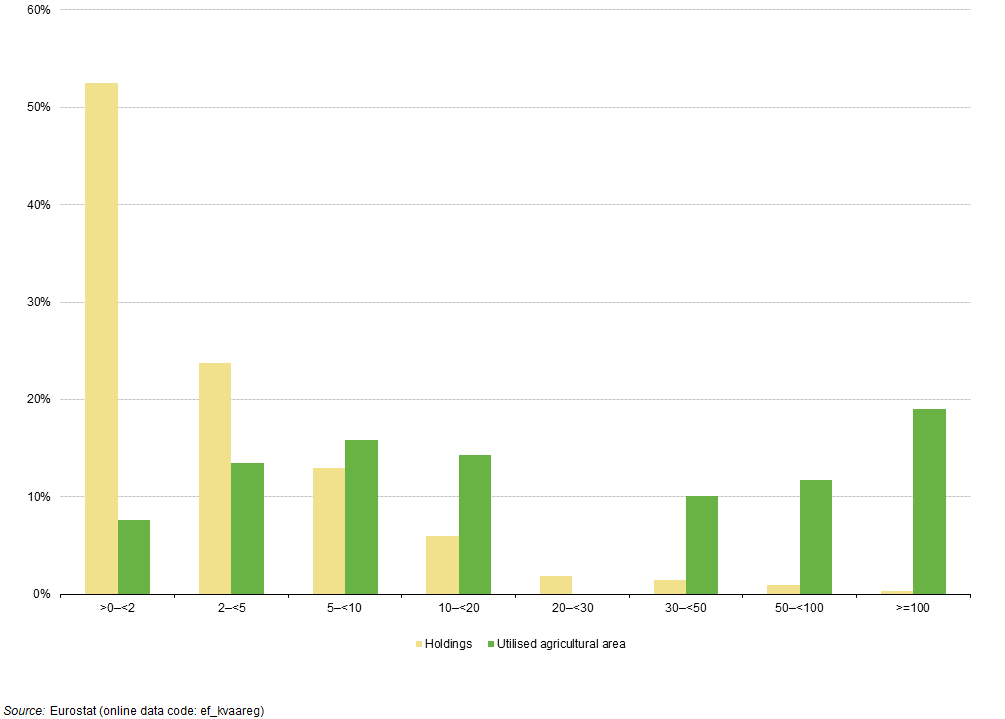 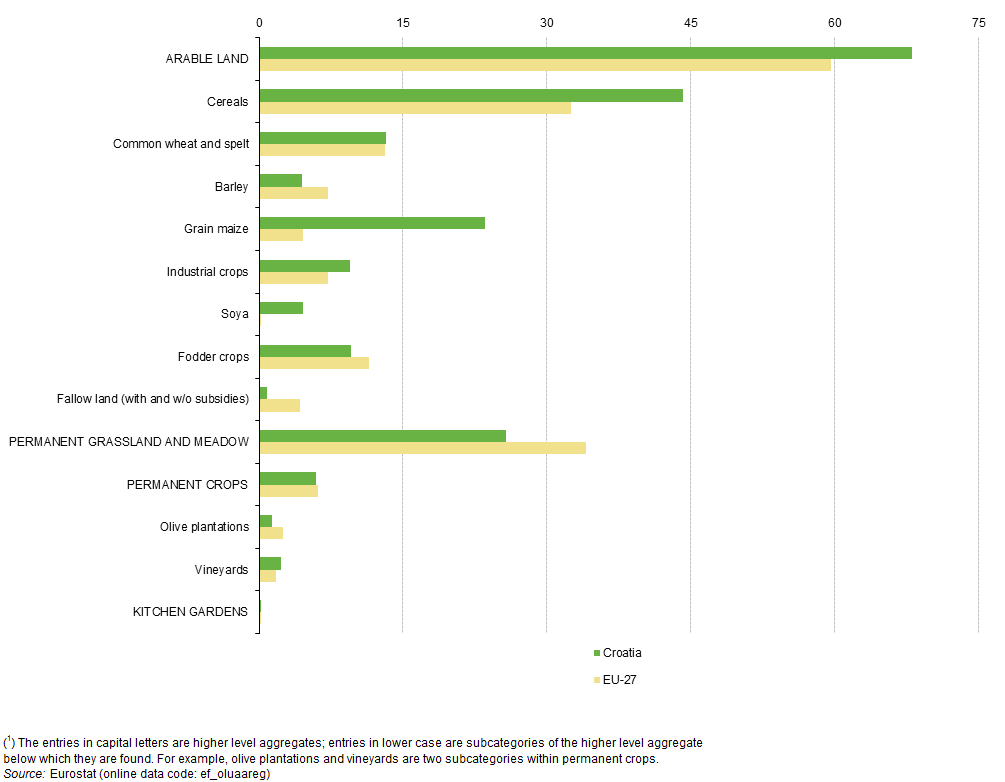 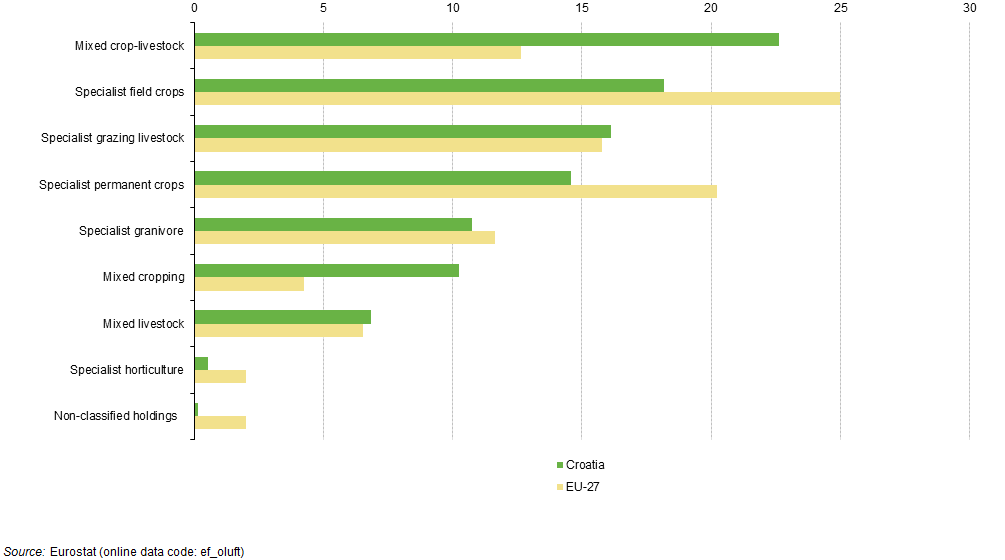 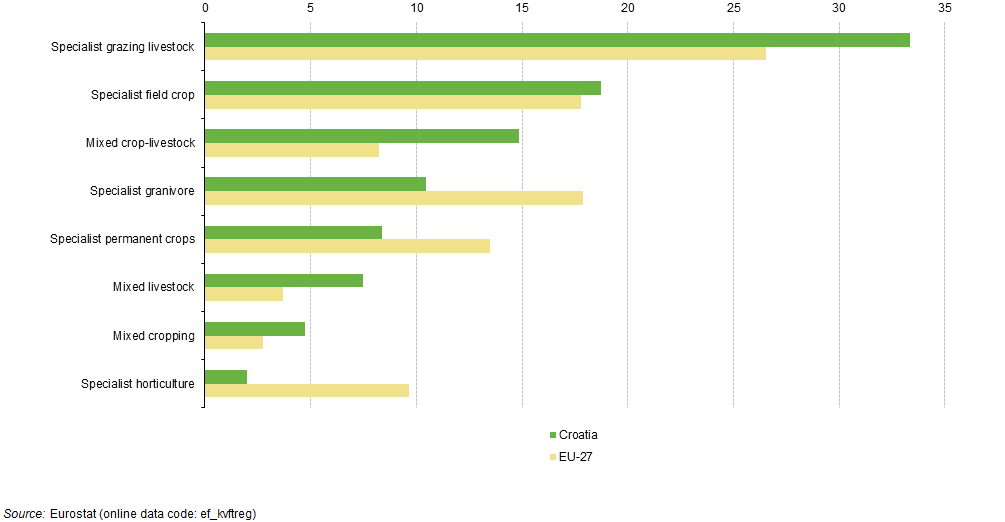 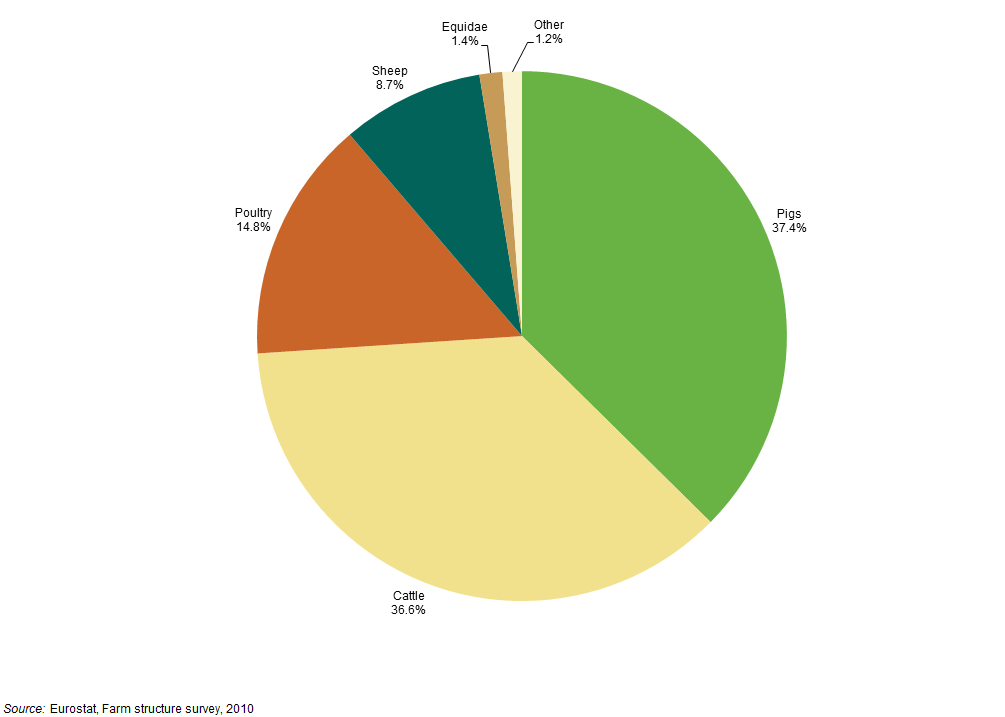 A little less than one quarter (23.3 %) of the total land area of Croatia was farmland in 2010. This was a relatively low share; it was only higher than the shares recorded in four other EU Member States (Sweden, Finland, Cyprus and Estonia) and represented about three fifths of the EU-27 average (40.0 %).

A little over two thirds (68.0 %) of the land used for farming (the utilised agricultural area) in Croatia was classed as arable land. Of the 895 220 hectares of arable land in 2010 about two thirds (65.0 %) was given over to cereals, of which a majority (310 450 hectares) was land under grain maize production. These relative shares were higher than the EU-27 average (see Figure 2). By contrast, the proportion of farmland used as permanent grassland and meadow in Croatia (25.8 %) was much lower than the EU-27 average (34.0 %) in 2010.

The general make-up of the agricultural sector in terms of farm types was also somewhat different in Croatia when compared with the EU-27 (see Figure 3). A little over one in every five (22.6 %) holdings in Croatia was classified as being a mixed crop and livestock farm in 2010, compared with about one in every eight (12.6 %) farms in the EU-27. There was also a higher relative share of agricultural holdings classified as mixed cropping farms in Croatia (10.3 % compared with 4.2 % for the EU-27). By contrast, the proportion of holdings classified as specialist field crops farms (with cereals, oilseeds and/or protein crops) and specialist permanent crop farms (with vineyards, orchards and olive groves) in Croatia was lower than across the EU-27 (18.2 % and 14.6 % compared with 25.0 % and 20.2 % respectively).

Even though holdings classified as being specialist grazing livestock farms (with dairy cows, cattle, sheep or other ruminants) accounted for only 16.1 % of holdings in Croatia in 2010, they were estimated to have generated one third (33.4 %) of the standard output (an average monetary value used to provide an economic dimension). This was a much higher share of standard output than the average from specialist grazing livestock farms across the whole of the EU-27 (26.5 %). Likewise, the share of economic output generated by mixed crop and livestock farms in Croatia (14.9 %) was much higher than the average across the EU-27 (8.3 %), in part reflecting the much higher proportion of holdings classified as mixed crop-livestock farms. By contrast, the proportion of economic output generated by specialist granivore farms (with pigs or poultry), specialist permanent crop farms and specialist horticulture farms in Croatia was much lower (10.5 %, 8.4 % and 2.0 % respectively) than on average (17.9 %, 13.5 % and 9.6 % respectively) across the EU-27 in 2010 (see Figure 4).

A little over two thirds (67.0 %) of the agricultural output of Croatia in 2010 came from specialist grazing farms, specialist field crop farms and mixed-crop livestock holdings, which was a much higher proportion than the EU-27 average (52.6 %), where specialist granivore farms (with pigs or poultry) and specialist permanent crop farms accounted for a higher share of economic output.

A little over four in every five farms (83.2 %) in Croatia had some livestock in 2010, a much higher proportion than that recorded for the EU-27 (56.0 %). In order to compare livestock of various species and ages, numbers of animals are given a weighting and transformed into a reference livestock unit (an LSU). On this basis, the ‘national herd’ of 1.0 million LSU in Croatia was dominated by pigs (37.4 %), cattle (36.6 %) and poultry (14.8 %) — see Figure 5. Not only can farms in Croatia be characterised as being small in terms of land area but also in terms of their livestock; on average, each holding that had livestock in Croatia had just 5.3 LSU (the equivalent of just over five adult dairy cows), compared with 20.0 LSU on each holding that had livestock in the EU-27 in 2010. Indeed, the vast majority (81.1 %) of the holdings in Croatia that had livestock had less than 5 LSU.

The farm structure survey carried out in 2010 suggests that a much higher number of people worked regularly in the Croatian agricultural industry (513 680 people). Many of these people were family helping out on the farm but having their main employment elsewhere. After taking into account the amount of time actually worked, the regular agricultural labour force in Croatia was estimated to be the equivalent of 179 290 people working full-time (in annual work units). With the equivalent of an additional 5 500 full-time workers coming from non-regular agricultural labour and persons not directly employed by the holding, the total workforce in Croatian agriculture was equivalent to 184 480 full-time workers (see Table 3). This represented 1.9 % of the full-time equivalent agricultural workforce in the EU-27 in 2010.

Farming in Croatia is very much a family affair; on average 90.7 % of the labour input for agriculture (measured in annual work units) was carried out by the farmer and/or a member of his/her family in 2010. This was a much higher proportion than the average for the EU-27 (76.4 %). Two in every five (40.2 %) regular agricultural workers in Croatia was female, a slightly higher proportion than the corresponding EU-27 average (37.5 %). However, the proportion of female sole holders (in whose name the holding was operated) was lower in Croatia than across the EU-27 (20.9 % compared with 23.2 %).

Croatia conducted its first independent agricultural census in 1960. However, surveys on the structure of agriculture during the 1970s–90s were based on a different methodology to the farm structure survey. As a prospective member of the EU, Croatia carried out a farm structure survey in 2007 and 2010; the responsible body for this work was the Croatian Bureau of Statistics.

In 2010, all farms of at least 0.4 hectares of agricultural area or 0.1 hectares of vineyards or orchards were surveyed for the farm structure survey in Croatia. Furthermore, farms falling below these thresholds but producing vegetables, herbs, strawberries, mushrooms, flowers or ornamental plants for selling purposes were also included in the target population, as well as holdings with at least 0.5 livestock units. This coverage of small farms means that the results from 2007 to 2010 are not strictly comparable because of the change in coverage. The FSS covered 98 % of the utilised agricultural area and 98 % of the livestock in Croatia in 2010.