This article presents statistics on vehicles for transport of freight in the European Union (EU): lorries, road tractors, semi-trailers and trailers. It describes the development in the number of such vehicles and describes the trends in the registration of new vehicles. It also analyses the load capacity of these vehicles, which is essential for the capacity of the transport sector in the EU to move freight.

In 2012, France and Spain had the highest numbers of lorries, with the strongest growth in France. For road tractors, the highest number was recorded in Poland, followed by France, Germany and Spain. Road tractors are motor vehicles designed to haul semi-trailers and similar trailers without motor; correspondingly, the largest numbers of semi-trailers were found in the same countries.

The registrations of new lorries and road tractors fell sharply in 2009, but have recovered in the subsequent years. These fluctuations were most pronounced in Latvia and the other Baltic Member States, as well as in some other eastern Member States. 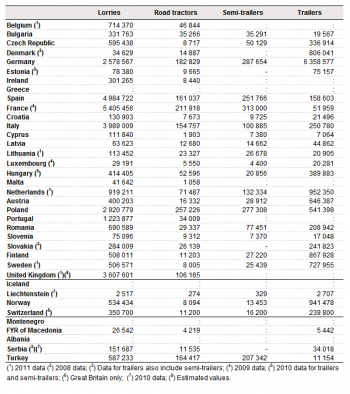 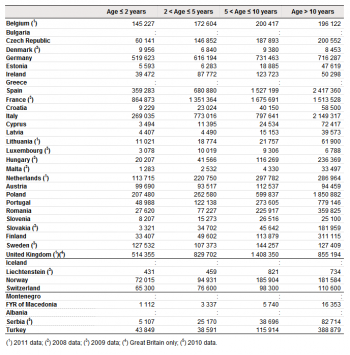 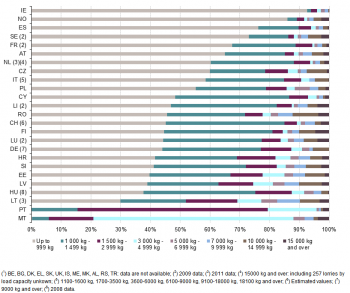 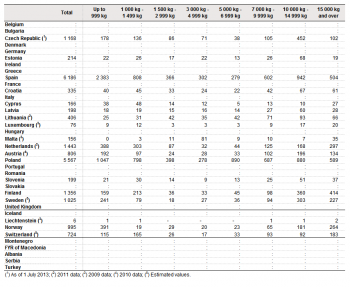 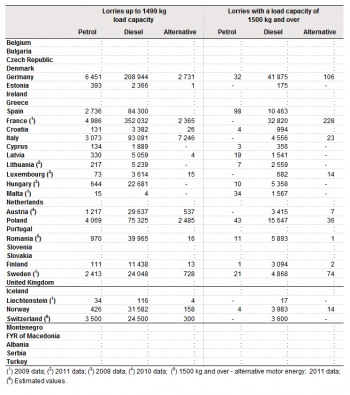 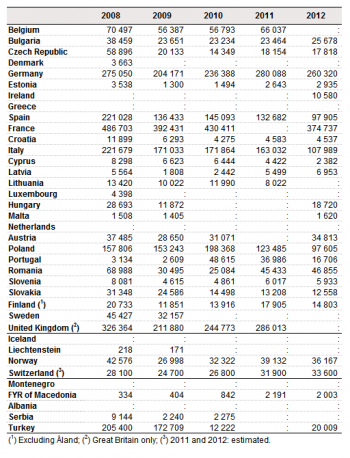 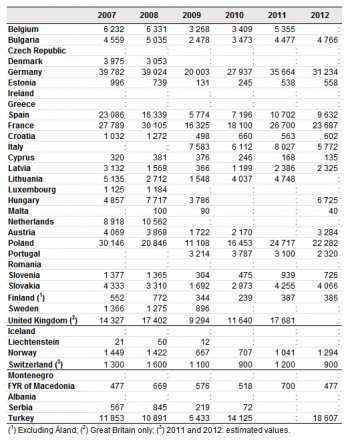 High number of lorries in France and Spain; France recorded the most new lorries

Looking closer at the data behind Table 2, the highest number of 2 years old or newer lorries was recorded in France, with 864 873 (2009 data). There were high numbers of new lorries also in Germany (519 623), the United Kingdom (514 355, 2011 data) and Spain (359 283). Denmark had the highest share of new lorries (29%, 2008 data). Other Member States with high shares of new lorries were Austria and Sweden (both 25%, 2009 data for Sweden), Belgium and Germany (both 20%, 2011 data for Belgium). However, the age structure of the national stocks of lorries differs widely between Member States. In many eastern and southern Member States, the main shares of lorries were 10 years old or older. Malta had the highest share of old lorries, amounting to 80% of all registered lorries in the country. Thereafter followed Slovakia (69%; 2009 data), Cyprus (65%), Portugal (64%) and Poland (63%). In contrast, Ireland had the lowest share of old lorries, representing only 17% of the registered lorries.

Spain has the highest number of small lorries

Figure 1 shows that the two categories covering smaller lorries, with capacity of up to one tonne and from one up to one and a half tonnes respectively, accounted for more than three quarters of all lorries in 13 of the 22 Member States for which data are available. Notable exceptions were Portugal and Malta. On Malta, 82% of the lorries had a load capacity from 1.5 up to 5 tonnes; in Portugal, this share was 80%. Looking at the largest lorries, the highest shares of lorries with a load capacity of 10 tonnes or more were recorded in Romania (12%), in Finland and in the Baltic states Latvia and Lithuania (all 10%). In absolute numbers, the highest numbers of these heavy lorries were found in Italy (189 037), followed by Germany (140 627; load capacity more than 9 tonnes) and France (127 397; 2011 data). In this context, it should be kept in mind that the methodologies for the voluntary Common Questionnaire for Inland Transport are not harmonized; differences may to a certain extent reflect national vehicle registration systems and practices. See the section below on Data sources and availability for more details.

Table 3 shows that the actual load capacity of registered lorries were relatively unevenly distributed over the different size classes (in terms of load capacity) in the Member States for which data are available. In general, the distribution of load capacity of lorries was relatively heterogeneous across small (up to 1.5 tonnes), medium sized (from 1.5 up to 10 tonnes) and large lorries (10 tonnes or more). However, in each Member State there was a dominating size category. The smallest lorries provided around half of the total lorry load capacity in Spain and Cyprus (both 52%) and the Netherlands (48%). In contrast, the largest lorries provided more than half of the total lorry load capacity in Finland (57%) and Sweden (52%), while the load capacity offered by medium sized lorries was highest in Malta (71%), Lithuania (47%) and Poland (41%). However, it should be noted that these data are only available for 15 Member States.

Table 4 shows that lorries with a load capacity of 1.5 tonnes or more were almost exclusively fuelled by diesel in 2012; with the exception of Malta (2.1%, 2009 data) and Latvia (1.2%), less than 1% of these lorries were powered by petrol. In Germany and Sweden, more of the large lorries were motorised by alternative fuel engines than by petrol engines. However, compared to the total number of large lorries, Luxembourg (2.0%; 2008 data) and Sweden (1.5%; 2009 data) showed the highest shares of lorries with alternative fuel engines.

There were similar falls in the registrations of new road tractors (motorized vehicles for hauling semi-trailers and similar) from 2008 to 2009 (Table 6); only Cyprus (-1%) and Malta (-10%) showed relatively small decreases. While the registrations of new road tractors in Cyprus fell strongly in the three following years, the growth picked up again in 2010 and 2011 in most other Member States. However, in 2012 the number of registrations decreased again in all available Member States except Bulgaria and Croatia. These falls were particularly accentuated in several of the Member States around the Mediterranean sea, including Italy (-28.1%), Portugal (-25.2%), Slovenia (-22.7%) and Cyprus (-19.6%).

Definitions
All definitions used are taken from the Eurostat/UNECE/ITF Illustrated Glossary for Transport Statistics, currently in its 4th edition. This glossary can be found on Eurostat’s website.

Road motor vehicle designed, exclusively or primarily, to haul other road vehicles which are not power-driven (mainly semi-trailers). (Agricultural tractors are excluded.)

Goods road vehicle with no front axle designed in such way that part of the vehicle and a substantial part of its loaded weight rests on a road tractor.

Goods road motor vehicle coupled to a trailer. Articulated vehicle (road tractor coupled to a semi-trailer) with a further trailer attached is included.

Maximum weight of goods declared permissible by the competent authority of the country of registration of the vehicle.

Total of the weight of the vehicle (or combination of vehicles) including its load when stationary and ready for the road declared permissible by the competent authority of the country of registration. This includes the weight of the driver and the maximum number of persons permitted to be carried.

Weight of vehicle (or combination of vehicles) excluding its load when stationary and ready for the road. The unladen weight may include driver and fuel, dependent on national practice.

The cylinder capacity of the engine as certified by the competent authority of the country of registration.

A type of motor energy other than the conventional fuels petrol and diesel. Alternative fuels include electricity, LPG, natural gas (NGL or CNG), alcohols, mixtures of alcohols with other fuels, hydrogen, biofuels (such as biodiesel), etc. (This list is not exhaustive.) Alternative fuels do not include unleaded petrol, reformulated petrol or city (low-sulphur) diesel.

The Common Questionnaire on Inland Transport is a joint project of Eurostat, the International Transport Forum (ITF) and the United Nations Economic Commission for Europe (UNECE). The data are provided on a voluntary basis by a large number of countries, both within and outside the European Union. Data is collected from reliable sources, but data collection methodologies are not harmonised at EU level. Comparability across countries is restricted as the classifications used in the national vehicle registers are not harmonised. Vehicles registers may exclude taxis, pick-up and vans, and may also exclude very old vehicles. This article covers data provided by the EU Member States, the European Free Trade Association (EFTA) countries and EU enlargement countries.