This article is part of a set of background articles and introduces public employment in Estonia.

Estonia has been a member of the European Union (EU) and NATO since 2004. The Estonian language shows many similarities to Finnish and Estonians have close historical and cultural ties to Scandinavia. It is an independent, sovereign and democratic republic.

Supreme power lies with the people who elect the “Riigikogu” (Parliament). The President is the Head of State, but the Riigikogu and the Government exercise legislative and executive power. The functions of the executive are divided into Government areas managed by Ministries. The State Chancellery (Government Agency) supports the Government and the Prime Minister.

The political and administrative systems are interrelated in the Ministries. 11 ministries are responsible for the organization of areas of government. The ministries are managed by political, ministers working in them. Constitutional Institutions consist of Chancellery of the Riigikogu, Office of the Legal Chancellor, Office of the President, Supreme Court, State Audit Office. Ministers (politicians and members of the central government) are the heads of the Ministries and the Government Agencies. The regulation that controls the Government of the Republic classifies the agencies of the Executive Power as follows: Government Agencies; State Agencies administered by the former.

Government Agencies are administrative agencies (Ministries, the State Chancellery, County Government, Executive Agencies and Inspectorates, their Regional Offices, etc.). They are funded through the state budget and their main function is to exercise Executive Power. 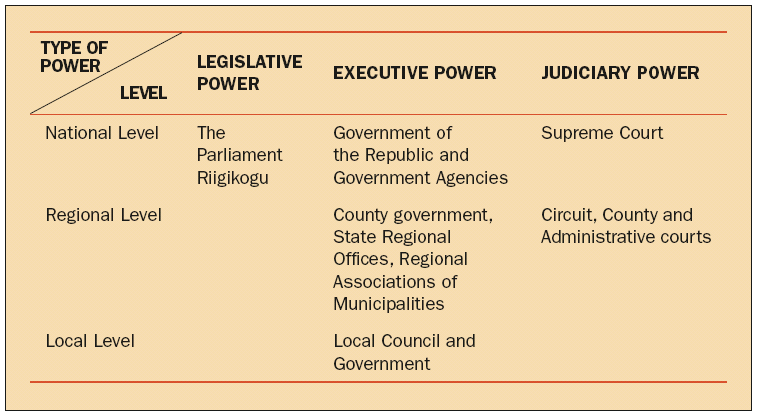 The country is divided into 15 Counties (maakonnad) as administrative sub-divisions. The County Government (maavalitsus) of each county is headed by a Governor (maavanem), appointed for 5 years, as the central government’s representative at regional level.

The regional level of the administrative system includes: county governments, and

regional offices of executive agencies, inspectorates and regional associations of

Legal Basis: The 1995 Public Service Act, which is applicable to public service employees, laid the foundations to build a professional and neutral body of public servants. Estonia has an open and position-based public service system, (it is possible to enter at any level, including the highest) and its management is decentralized (each Ministry and Executive Agency recruits, evaluates and trains its own staff) which covers state institutions and municipalities. Public service (public service) employees are defined as staff employed by the central government institutions (Ministries, agencies, inspectorates, constitutional institutions and the county governments) and local government administrative agencies. Some groups are regulated by special legislation (the diplomatic corps, police officers, judges and the armed forces). The Public Service Employment System does not include medical staff, teachers and academics, whose working conditions are regulated in the Employment Contracts Act. 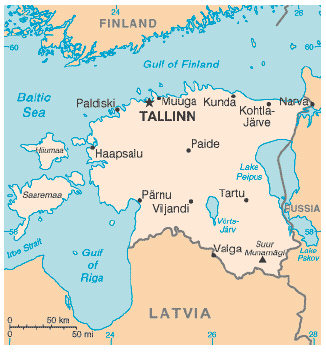 Officials: Appointed to an office in an administrative department, whereby a distinction is made between state employees and local government employees;

Non-Staff Public Servants: Recruited for a specified period of time on the basis of an appointment or an employment contract.

The Public Service Code of Ethics, which was included as an Annex to the Public Service Act in 1999, prescribes 20 principles and values that all public servants are expected to hold (for example: performing their functions impartially. based on respect for the Constitution and other laws, pursuing the public interest etc). According to the Anti-Corruption Act, the officials are obliged to submit annually declarations of their economic interests. In addition the public officials do not have the right to strike.

Rights of public servants include Pregnancy Leave and Maternity Leave (140 days). In the case of multiple births or a delivery with complications, maternity leave is extended to 70 days. Fathers can take 10 days paternal leave. There are also benefits for employees raising a child until the age of 3, whereby the employment contract is suspended for the duration of the parental leave but the employee is paid parental benefit (his/her average salary) for 14,5 months. All public servants are also entitled to base holiday of 35 calendar days a year, a study leave for professional development of 3 months once every five years as well as a old-age pension of official.

Promotion is appointing of official to a vacant higher position upon the recommendation of a supervisor and with the approval of an Assessment Committee. As previously indicated, the Public Service is an open position-based system, in which candidates that fulfill the requirements of public servant can enter the system at every level, including the highest level. There is however an exception for Senior Public Servants, who are recruited, promoted and assessed by a committee located by the State Chancellery. The Head of State and local governments can also organize competitive recruitment exams for certain positions.

The principles of the pay system and its scales are set out in the State Public Servants Official Titles and Salary Scale Act. The salary rates shall be established annually by the Government. The salary rates for local public servants and their agencies are approved by each local council.

Social dialogue and system of representation

The unionization rate is fairly low in the Estonian public service (less than 10%) Collective bargaining negotiations (limited in the central level and informal and decentralized) are carried out between the Confederation of Estonian Trade Unions and an interministerial committee headed by the Minister for Social Affairs. The areas addressed primarily concern work conditions, salary, retirement system and public sector reform. Agreements are binding.

The Senior Public Service is a staff system for senior management positions in the public service. It is a framework for career development that allows positions to be assigned competitively for advisory functions related to public policies, operational management and services. In Estonia, they are called “Top Public Servants” and enjoy special conditions and treatment that is different to that of other public servants, although they do not have a formal status.

Recruitment Methods : The State Chancellery publishes the open process for the vacant position. Candidates are evaluated by the Committee for the Recruitment and Assessment of Senior State Public Servants, except for Secretary-Generals and Local Governors. Deputy Secretary-Generals and Director-Generals of Agencies or Inspectorates are proposed to the authority by a Selection and Assessment Committee in order to proceed to appointment. Each Ministry and Agency is responsible for the recruitment, assessment and career development of its senior positions.

Senior executives are assessed once a year and there are also additional voluntary assessments. Those appointed to senior positions together with their superior, prepare their career dossier taking the results of their competences assessment into account for the next period. The Competences Dossier consists of self-assessment by the executive, assessment by his/her immediate superior and a summary of the evaluations and comments made by his/her subordinates and colleagues.

Their Training includes leadership activities, such as individual development tasks under the supervision of a mentor or a senior executive with experience and development programs at various levels in order to improve the competencies of senior executives.

There is no special pay system solely applicable to top public servants and in practice the final remuneration is based on mutual agreement. In senior non-political positions (Secretary-Generals) 4 out of every 11 are women.

Estonian Government Program of the Coalition for 2007-2011 foresees the adoption of a new Public Service Act. The draft framework of the new Act proposes that the number of public servants is considerably reduced (by applying the provision of the Employment Contracts Act to them) and the possibilities of working in state and local government agencies on the basis of an employment contract shall be expanded. As a result of the proposed changes, the legal acts regulating public service and private sector employment should be more harmonized. In addition, many groups of public servants will not be prohibited to strike (the reform proposal will not concern those public servants who are responsible for exercising public authority). The new Act would affect the state as well as local government officials who have been recruited under the conditions of the current Public Service Act.