This Statistics Explained article is outdated and has been archived - for recent articles on Digital economy and society see here. This article takes a look at European postal statistics from 2004 to 2011 covering universal service providers, the companies operating under the universal service obligation. The main priorities for EU policies on postal services include:

Key elements of the EU policy in this area are: 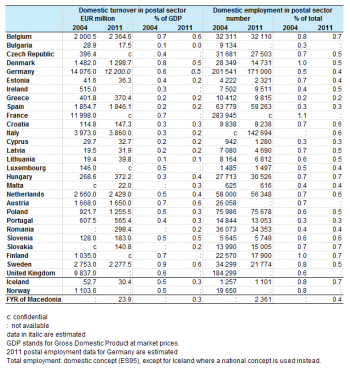 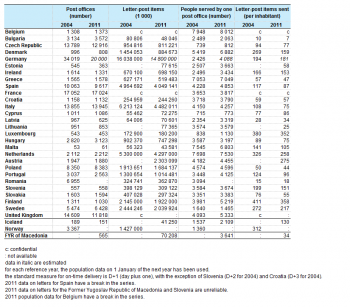 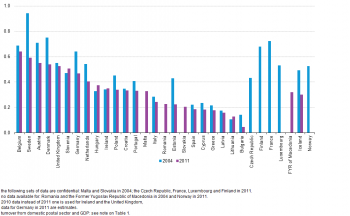 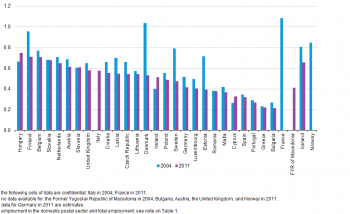 Figure 2: Number of persons employed in the domestic postal sector as share of total employment, 2004 and 2011 (%).br>Source: Eurostat (post_ps_empn) (nama_aux_pem) 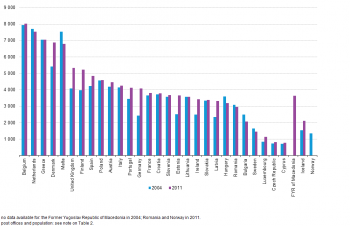 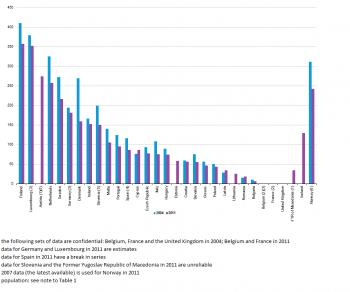 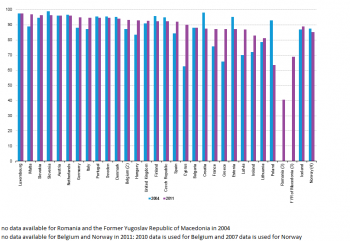 Postal items may be deposited by customers for processing in postal services in different physical facilities. These access points include post offices, agencies and outlets, mobile post offices, letter boxes, post office boxes and places at which only stamps can be bought. One measure of access to the network is the number of people served by one post office. This is calculated by dividing the population by the number of post offices.

In all Member States except Cyprus, Latvia and Romania, the number of letter-post items handled per capita in 2011 declined compared with 2004.

Eurostat collected data on postal services between 2005 and 2012 (last reference year is 2011). In 2013 Eurostat discontinued the collection on postal statistics and transferred its data collection and processing functions together with the historical postal data to DG GROWTH.

Eurostat worked with National Regulatory Authorities (NRAs) in collecting this data. The definitions of variables were discussed and agreed with European postal regulators as part of a project group (Assistance and development of EU statistics") run by the European Committee for Postal Regulation (CERP).

The data presented here cover the companies operating under the universal service obligation (universal service providers). ‘Universal service’ means the set of general requirements to which services such as the mail should be subject throughout the EU. The aim is to ensure that all users have access to high-quality services at an affordable price.

All variables used in this article were collected as part of Eurostat’s EU Postal Survey, based on annual questionnaires covering the universal service providers in the participating countries. These countries are the 28 EU Member States, the Former Yugoslav Republic of Macedonia, Iceland and Norway. Data was provided by the National Regulatory Agency in each country.

The purpose of EU policy in the postal sector is to complete the single market for postal services and to ensure, through an appropriate regulatory framework, that efficient, reliable and high-quality postal services are available throughout the EU at affordable prices. The importance of postal services for the economic prosperity, social well-being and cohesion of the EU make this a priority area for EU action.

The EU legal framework governing postal services is set out in Postal Directive 97/67, as amended by Postal Directive 2002/39 and as amended by Postal Directive 2008/06 (3rd Postal Directive). Improving the quality of service, in particular in terms of delivery and convenient access to the postal system, is a fundamental aspect of EU postal policy. The Commission monitors implementation of the regulatory framework, ensuring that this is done correctly, and, where appropriate, it proposes changes to this framework to achieve the EU’s postal policy objectives. The directives listed above provide the European legal framework within which national regulatory authorities must accelerate and promote the opening of markets.

The process of liberalising the postal services market in the EU was initially set in motion by the Green Paper on the development of the single market for postal services in 1992, as part of the goal of creating a European single market. The aim was to get national monopolies to open up to competition in order to make postal services cheaper, faster, more efficient and more innovative, harmonise performance across EU Member States and improve the quality of cross border-services.