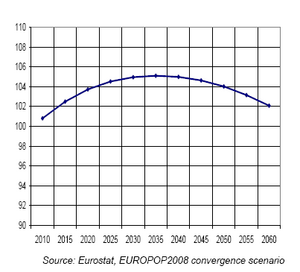 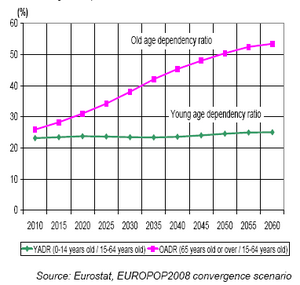 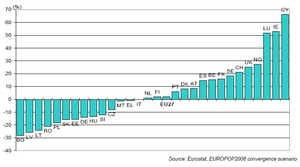 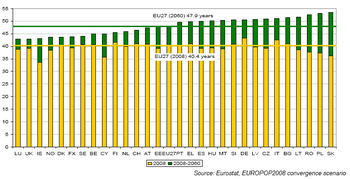 Graph 4: Median age of the total population of the EU Member States, Norway and Switzerland - 2008, 2060 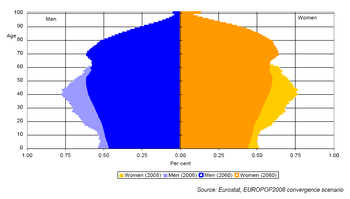 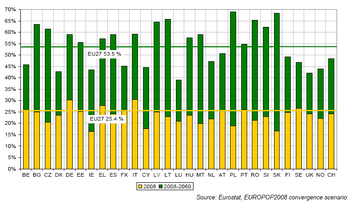 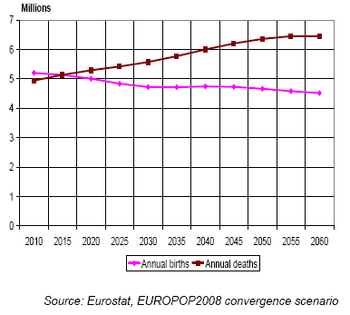 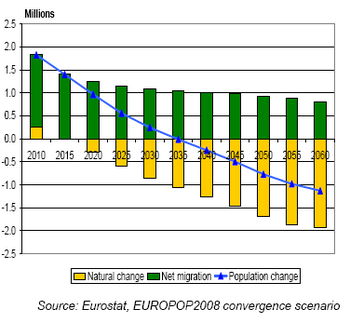 Table 12: Assumptions for the EUROPOP2008 convergence scenario, convergence year 2150 for the target year 2060

This article looks at Eurostat’s latest population projection scenario (EUROPOP2008, the convergence scenario) for the 27 Member States of the European Union (EU) and two non-EU countries, Norway and Switzerland. Population projections are what-if scenarios that aim to provide information about the likely future size and structure of the population. The European Commission uses the results to analyze the impact of ageing populations on public spending.

Although the EU population is likely to be 2.1 % higher on 1 January 2060 compared to 2008 (see Graph 1), there will be a considerable variation among Member States. Fourteen Member States are projected to have a smaller population on 1 January 2060 than 2008 (see Graph 3). From these countries, those that are projected to show a falling population over the whole period (2008-2060) are Bulgaria, Latvia, Lithuania, Romania,Poland, Estonia and Hungary.

The two non-EU countries, Norway and Switzerland, are projected to have a higher population on 1 January 2060 than in 2008. They are part of a group of countries whose total populations are projected to follow a continuously rising path over the whole projection period, these are Cyprus, Ireland, Luxembourg, Norway, United Kingdom, Switzerland, Sweden, Metropolitan France, Belgium and Denmark

In 2060, when compared to 2008, the changes in the total population are projected to have a moderate impact on the Member States’ shares of the EU population.

Population ageing is a common process

The population is projected to become older in all Member States, Norway and Switzerland (see Graph 4). Thus, the median age of the total population is likely to increase in all these countries without exception. This is due to the combined effect of the existing age structure of the population, persistently low fertility, and a growing number of people who are living longer.

The ageing process is also visible in the age structure of the projected population. The share of the population aged 65 years or over is projected to increase in all countries. It should be noted that the projected increase of less than 10 percentage points only applies to six countries.

In particular, for all countries, the population of those aged 80 years or over is projected to increase in both relative and absolute terms. Population pyramids are graphs that show the age and sex distribution of a population (usually at every age or year of birth). Each horizontal bar corresponds to the share of the population at that age, and that sex, in the total population. The EU population continues to age. The 2008 population pyramid appears with bulges in its sides due to the baby boomer groups of the 1960s, which are significant on account of their size (see Graph 5).

In the coming decades, the high number of ageing baby boomers will swell the number of elderly. Thus, this population pyramid for the EU projects that the baby boomer bulge will move up while both the middle part (those of working age, aged 15-64) and the pyramid's base (the young, aged 0-14) will narrow considerably by 2060.

Two-thirds of the countries are expected to suffer a decrease in their working age population, although the drop will not be the same in every country. In 2060, combined with a general increase in those people aged 65 years or over, the old-age dependency ratio will vary among countries by almost 30 percentage points from the lowest to the highest; in 2008, the difference was 14 percentage points (see Graph 6). Therefore, although this dependency ratio will increase for the whole group, individual countries will be affected differently. In 2008, the old-age dependency ratio in the new Member States that joined the EU in 2004 and 2007, is relatively lower or much lower than it is in the entire EU.

As a result of below-replacement fertility for all countries, there are fewer women who reach the reproductive age. This will result in fewer births than in the past.

Thus, for the EU, the annual number of births is projected to decrease in 2008-2060 (see Graph 7). At the same time, the annual number of deaths is projected to continue rising. From 2015, it is projected that there will be less births than deaths and, hence, population growth due to natural increase will end. For this reason, positive net migration will be the only population growth factor. However, in the long run, increasing migration will not be sufficient to compensate for this negative natural (population) change (see Graph 8).

Eurostat produces population projections every three. The latest set of population projections, EUROPOP2008 “convergence scenario”, is based on the population on 1 January 2008. The assumptions have been developed using the concept that the socio-economic and cultural differences among EU Member States would disappear in the long run. If the narrowing of differences concern the demographic drivers, then this assumption implies a convergence of demographic values. So, in 2150, fertility levels are assumed to converge to those achieved by Member States that are leading the demographic transition or fertility drop. Increases in life expectancy are assumed to be greater for countries at (currently) lower levels and smaller for those at (currently) higher levels, thus they all follow convergent paths in life-expectancy trends. In 2150, net migration is assumed to converge to zero. And, migration in each country has been adjusted upwards when the working age population, having taken into account the converging migration, presents a deficit for the respective projection years.

These assumptions can be summarized by means of indicators such as total fertility rate, life expectancy at birth and net international migration for the target year 2060. The latter is expressed as the share of the cumulative net migration over the whole projection period 2008-2060 in the total population on 1 January 2061. Alternative assumptions under a different concept as, for example, the trend scenario, would yield different results.

Remarks on the starting population

The population at 1 January 2008 is based on the latest available estimates produced :

Thus, minor differences might be observed in data released from official sources at a later date.

In particular, the assumptions have been developed under the concept of convergence of demographic values as a result of decreasing socio-economic and cultural differences among the EU Member States, Norway and Switzerland.

The current scenario is primarily used for the European Commission’s analysis of the impact of ageing populations on public spending.

Over the last decades, population projections have raised concerns about the consequences of an ageing population. Life expectancy is increasing, fertility rates are falling and the baby boom generation is starting to retire. These facts have led to a debate on how European countries will cope with the changed age structure and its impact on public finances, employment, economic growth and other policy areas.

In particular, the European Commission’s Directorate-General for Economic and Financial Affairs (DG ECFIN) analyzes the impact of ageing populations on public expenditure. More precisely, the DG makes projections of different categories of public expenditure which are affected by the ageing of populations, such as pensions, healthcare and long-term care.

The population projections are a key input for the assessment of the long-term sustainability of public finances across Member States. The DG has released the "Economic and budgetary projections for the EU-27 Member States (2008-2060)-The 2009 Ageing Report".

In addition, the Directorate-General for Employment, Social Affairs and Equal Opportunities (DG EMPL) is addressing the major economic, budgetary and social challenges posed by an ageing society with a renewed strategy for tackling Europe's demographic challenge. In this context, DG EMPL has released a Communication to the European Parliament, the Council, the European Economic and Social Committee and the Committee of the Regions entitled "Dealing with the impact of an ageing population in the EU (2009 Ageing Report)".