This article provides a general overview of statistics on pig farming in the European Union (EU). Pigmeat is produced throughout the EU on several types of farms with considerable variations from one Member State to another. Three quarters of pigs are reared by just 1.5 % of the largest fatteners. Small pig producers are mostly found in the 13 Member States that joined the EU since 2004, which creates a decreasing size of the herd. The tasks of pig rearing are distributed across farms in the main production basins and even across regions. 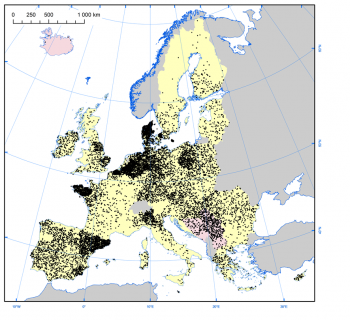 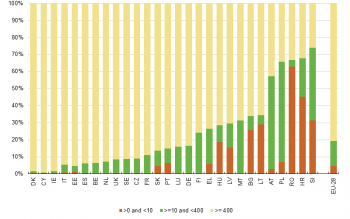 Table 1: Distribution of pigs and farms by type of pig rearing (FSS 2010) - Four types based on the numbers of sows and of other pigs 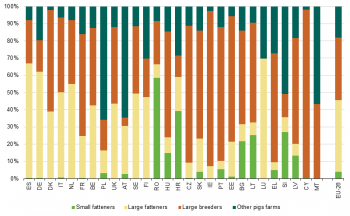 Figure 2: Distribution of other pigs by type of pig farm (FSS 2010) 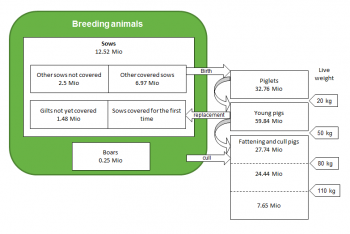 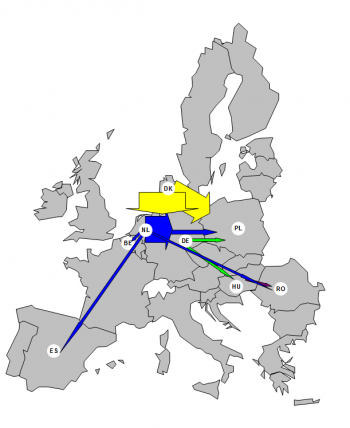 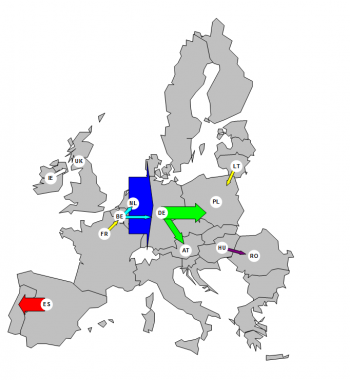 Map 3: Net exchanges of pigs for slaughtering, 2013 - Scheme of the intra-EU exchanges 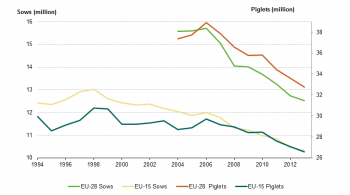 Figure 5: Change in the number of sows and piglets - In EU-15 and EU-28, December surveys - Source: Eurostat (apro_mt_lspig) 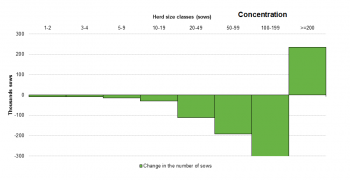 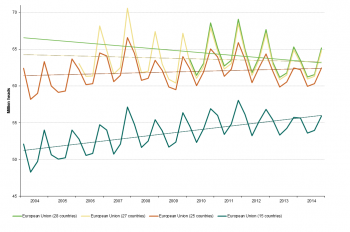 Regional data on livestock are more informative than national figures as a means of displaying the zones of pig production (Map 1). The major production basin extends from Germany (namely from Nordhein-Westfalen & Niedersachen), to Belgium (Vlaams Gewest) and accounts for 30 % of EU sows. However, there are other important regions, such as Cataluña, Murcia (Spain), Lombardia (Italy), Bretagne (France) and some areas of central Poland and Northern Croatia.

Structure of the pig farms

The distribution of national herds by size is taken from the Farm Structure Survey. The pigs are recorded in three categories, i.e. piglets, breeding sows and other pigs. The sows reflect the permanent pig herd and the other pigs are the pigs fattened before slaughtering (see details on Data sources and availability).

Two types of pig farm are classified based on the number of breeding sows: the fatteners and the breeder-fatteners. Almost half of the other pigs (41.6 %) are kept as fatteners, i.e. on farms without sows. However, this particular figure hides a range of different situations: 77.8 % of the other pigs are reared as fatteners with more than 400 animals, whereas 73.3 % of the fatteners have fewer than 10 pigs, mainly for own consumption. More than half of these numerous small farms (58.4 %) are in Romania.

The classification of pig farms according to their size class shows that on average the larger farms (more than 400 sows) are more technically efficient than medium- and small-sized farms. The size is a crucial element in the economic viability of pig farms. Smaller farms are impeded by greater technical inefficiencies whereas the large farms achieve better performance benefiting both from increased technical efficiencies as well as from greater economies of scale.

The breakdown of other pigs among the four types of pig farm (Table 1) is shown by country in Figure 2.

Components of the pig herd

Pig production is concentrated in a number of countries, with Denmark, Germany, Spain, France, the Netherlands and Poland having more than two thirds of the breeding pigs between them (December 2013 survey). At regional level (NUTS 1), more than half of the breeding pigs are concentrated in eleven regions, all of which are located in these six countries. Naturally, the size of the countries and regions plays a role in this ranking.

Components of the pig herd – types of animal

Components of the pig herd – trade of live animals

The intra-EU exchanges (COMEXT) of pigs less than 50 kg amounted to 468 542 tonnes in 2013 which is equivalent to 17.7 million heads (Map 2). This map shows the trade of live pigs flow in 2013 in EU-28. It cannot be compared directly with the population of young pigs at any given moment.

Germany is the main importer of young pig, with 55.1 % of total EU-28, followed by Poland with 23.2 %. For breeding animals and for slaughtering (Map 3), these two countries are shown as the highest importers as well.

Denmark is the piglet exporter leader country by far in EU-28 (56.9 % of the total EU-28). However exports of pigs for slaughtering are much more distributed between the different Member States.

It can also be noted from these maps that pig production is specialized even across borders. For example, Denmark for breeders, Spain for fatteners and mixed producers such as Belgium, Denmark, Germany and the Netherlands that comprise one of the major production areas referred in Figure 1.

Changes in the pig population

Such extreme changes are a combination of several factors, which have a varying impact depending on the structure of pig production. The general decrease concerns all countries, but the underlying reason is one of concentration, i.e. an increase in the size of the largest herds together with the disappearance of the smallest. The trend is towards a decrease in the number of breeding sows and, in the short-medium term, this change in the structure of pig production in the 13 newest Member States can be expected to continue.

Figure 5 shows that the decrease in the total number of sows is balanced by a gain in productivity.

The structural data on the changes in the number of sows from large farms with at least 200 sows and those from small farms with fewer than 10 sows enables us to classify member states pig sectors into three types.

Changes in the types of pig farm

The number of small fatteners follows a general downward trend. This cut is especially noticeable in those MS with more small farms. The number of pigs is also falling at a similar rate, as there is a strong link between these two numbers.

Although the number of large breeders has increased in some Member States such as Czech Republic, Estonia, Latvia, Hungary and Slovenia, the average number of breeding sows per farm has increased by 14 % at EU-28 level compared to 2007, however this figure has dropped in six Member States (Bulgaria, Ireland, Cyprus, Slovenia, Slovakia and United Kingdom). Concerning the average number per farm of other pigs the total increase has been around 22 % except in Ireland, Cyprus, Malta and United Kingdom.

This data confirms the trend of concentration of the pig production sector in large farms where fixed costs are divided by a larger quantity of animal increasing productivity thus reducing the average cost of production.

Porkmeat data reflects the production from the slaughtering of live pigs in a given country (Gross Indigenous Production, GIP). Should be noted that correspondence between fattening and slaughtering is not exactly the same.

Seasonal variations in production are due to lower sow fertility in summer as well as other cultural factors such as traditional celebrations. Porkmeat production shows an economic cycle (which is less than two and half years), although its impact on farmer decision is less than that of major economic changes or animal crises.

In 2013 porkmeat production in the EU-28 reached 252.9 million head (Table 2), of which more than half (58 %) came from four countries (Germany, Spain, France and Poland). The EU external trade balances showed a surplus around 1.2 million tonnes (porkmeat and processed porkmeat), which represents 5,4 % of the total slaughtering in 2013. Four countries (Denmark, Germany, Spain and Netherlands) contributed to 75 % of the total extra-EU exports mainly addressed to Russia, China, Japan and South Korea.

In accordance with the fall in the number of breeding pigs, it is foreseen that production during 2014 will decrease so that EU-28 GIP is expected to be around 251 million head in total for the four quarters of 2014 (Figure 9). According to the cycle of production an increase in porkmeat production can be however be possibly expected for 2015.

The decline in pig herds can be attributed mainly to low profitability. The cut on sow numbers was bigger than expected these last years in accordance with December livestock surveys. Also, during this last period there has been a high volatility in feed prices resulting in high prices for both cereals and compound feeding stuffs (Figure 10). This has created a difficult situation which has forced an important number of pig farmers to cease production.

For the data in this article, five different sources were used: