This article is part of a set of statistical articles based on the Eurostat online publication "Agriculture, forestry and fishery statistics". It presents information on milk and milk products in the last 30 years in the European Union (EU).

On 2 April 1984, following years of significant overproduction of milk and milk products (such as skimmed milk powder and butter), the Common Agricultural Policy (CAP) introduced milk quotas in the European Union. Prior to that, EU dairy farmers had been guaranteed a price for their milk (considerably higher than on world markets) regardless of market demand. The system also had an impact on world market prices, as the EU frequently subsidised exports to the world market. Starting in 1984, each EU Member State had two types of quota: one defined the maximum amount of milk delivered to dairies and the other the limit for direct sales at farm level. If the quantities of milk were above the defined thresholds a levy was applied to the farmers concerned.

The milk quotas, along with several other CAP reforms, brought to an end the milk powder and butter ‘mountains’ of the late 1970s and early 1980s. Reduced guaranteed prices along with the decoupling of direct payments from production also contributed to the stabilisation of farmers’ revenues in this sector [1].

In the 2009 ‘Health check’ of the CAP, the EU decided to prepare the ending of milk quotas for a so-called ‘soft landing’ by increasing the quotas by 1 % every year over 5 consecutive years, beginning on 1 April 2009 [2]. On 1 April 2015, 31 years after being put into place, dairy quotas were abolished. This change in the milk sector is set to allow farmers the flexibility to expand their production and to profit from the growing extra-EU demand for milk products [3].

The quota system was the main policy instrument in the EU milk sector. It is crucial for understanding the development of statistics on milk and milk products in the last 30 years analysed in this article.

The availability of milk statistics in the EU is largely dependent on the EU enlargements and two aggregates have been used to better understand the historical data. In 1983 the European Community consisted of 10 Member States (Belgium, Denmark, Germany [at the time West Germany or Federal Republic of Germany], Ireland, Greece, France, Italy, Luxembourg, the Netherlands and the United Kingdom) which constitute the EU-10 aggregate. Depending on the variable, the EU-15, EU-27 and EU-28 aggregates can only be obtained in more recent datasets. 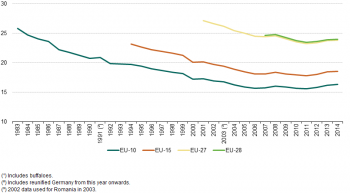 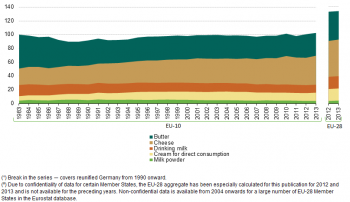 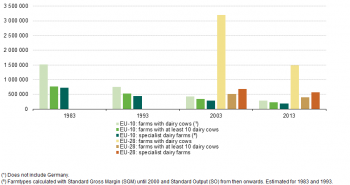 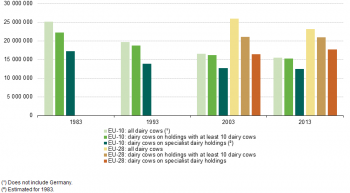 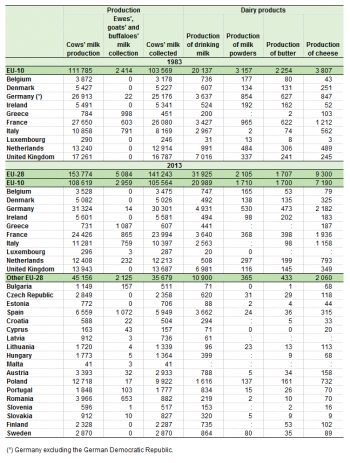 The number of dairy cows has significantly decreased in the last 30 years. In 2014, the total EU-28 figure (24.0 million head) was lower than the EU-10 figure in 1983 (25.7 million head). The decrease in the dairy cow herd along with the stable level of milk production indicate an improvement in milk yields over the last three decades.

As mentioned above, in 1983, the year before the introduction of milk quotas, EU-10 cow’s milk production peaked at 111.8 million tonnes. Close to half of the production came from France and Germany (at the time West Germany or Federal Republic of Germany) with 25 % and 24 % of milk production respectively.

From 1973 to 1983 production had grown by 21 % in the EU-10 (see Figure 1) and indicated the need to reduce excessive production of milk and dairy products, which was overrunning demand. The capping of milk production in 1984 produced immediate effects, and in 1984 EU-10 production figures of cow’s milk fell to 109.6 million tonnes.

In the last five years cow’s milk production has picked up, not only in the form of a post-crisis recovery but also due to the ‘soft landing’ measures introduced from 2009 onward in the EU. These measures consisted of a yearly increase of 1.0 % in the quotas to anticipate the end of the quota system in 2015. From 2009 to 2013, the rise in the cow’s milk production was higher in the EU-28 Member States (+7.5 %) than in the EU-10 Member States (+5.4 %). In some countries (such as Greece, Croatia, Portugal and Romania) there was even a reduction in cow’s milk production from 2009 to 2013 in spite of the increase in the quotas.

Animal husbandry has gone through significant technical developments over the last few decades. Indeed, the increase in milk production is not only linked to a rise in the total number of dairy cows, but also depends on other production factors such as improved breeding techniques, optimised diets, better milking methods and increases in the size of farms.

The extra-EU trade in dairy products has increased in recent years and, according to the European Milk Market Observatory, is expected to continue to grow.

The production of dairy foods is directly linked to the availability of its main ingredient: milk. Figure 3 representing the historical evolution of the use of milk by dairy products from 1983 to 2013 follows the trend pictured in Figure 1 and shows (similarly to the data on milk production) small variations in the total quantities of milk throughout the three decades.

In 1983, drinking milk accounted for 16 million tonnes or 16 % of total dairy production. In 2013, this share had been reduced to 13 % (18 million tonnes). On the other hand, over the same period, milk used for the production of cream for direct consumption had gained 7 percentage points (pp) in the share of the EU dairy products, reaching 13 % in 2013.

Structure of the farms

The structure of EU farms has gone through significant changes within the 30 years of the milk quotas. In general, when taking into account all agricultural holdings, from 1983 until 2010 there was a decrease of 3.6 million farms (– 55 %) in the EU-10. On average in these 10 EU Member States, 326 holdings per day ceased their activity over the last 30 years.

The EU-28 had close to 0.6 million specialised dairy farms in 2013, of which close to one third (33 %) were located in the EU-10 Member States. In the same period, these specialised farms had 17.7 million dairy cows, 71 % of which belonged to farms in the first 10 EU Member States.

The production of milk amounted to 112 million tonnes in the EU-10 in 1983 (see Table 1). After 30 years under the milk quota policies these 10 countries produced 109 million tonnes of milk, a 2.8 % reduction in milk production.

Due to the continuously decreasing number of dairy enterprises, national data are often subject to statistical confidentiality. Thus, providing EU totals in this context is a challenge and information presented in the analysis may be based on data not available with the usual precision, so that the published figures cannot disclose confidential values; each exception is clearly footnoted under the tables and figures presented. On the one hand, statistics from these few enterprises provide early estimates on trends. On the other, a complete overview of the dairy sector requires detailed information from farms and this means that the final figures on milk production are only available at an EU level about one year after the reference year.

Statistics on the structure of agricultural holdings are taken from the Farm Structure Survey (FSS), for more information on this survey see the FSS dedicated section of Eurostat Website.

For over 30 years, the EU’s dairy sector operated within the framework of milk quotas, which were introduced in 1984 to address problems of surplus production, but expired in April 2015. Until then, each EU Member State had two quotas: one for deliveries to dairies and the other for direct sales at farm level. Milk production data were used for signalling imbalances in the market that, if serious enough, would trigger public intervention (of butter and skimmed milk powder) and/or private storage. When national quotas were exceeded, punitive ‘super-levies’ were recovered from the farmers or dairies involved.

Data was used from two different datasets: Agricultural production (apro) and Farm Structure Survey (ef). These two data sets have differing methodology, which explains the minor disparities in some figures. For details on methodology see: