This Statistics Explained article is outdated and has been archived - for recent articles on Agri-environment indicators see here.

This article gives an overview of European meat production, based on data provided to Eurostat by the EU-28 Member States under Regulation (EU) No 1165/2008 concerning livestock and meat statistics. Data on livestock population categories are gathered from all European Union (EU) Member States through a livestock survey conducted at least once a year (see Data sources and availability). 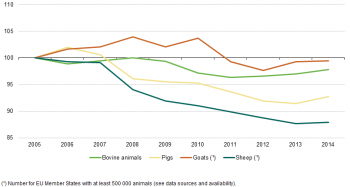 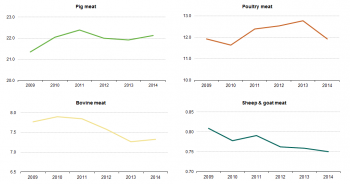 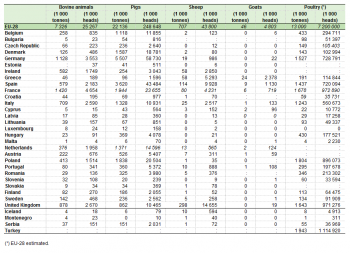 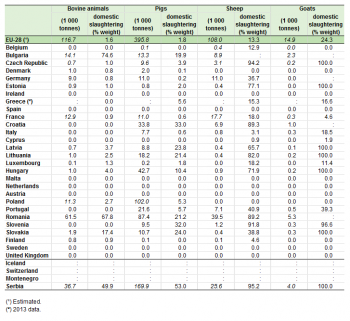 Table 2: Other slaughtering, all species, by country, 2014
Source: Eurostat (apro_mt_sloth) 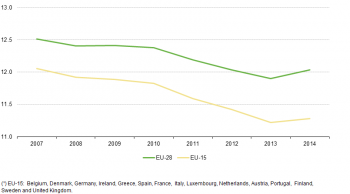 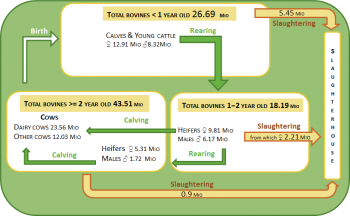 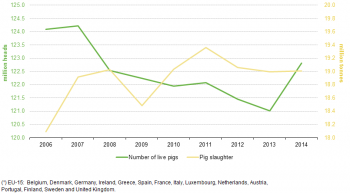 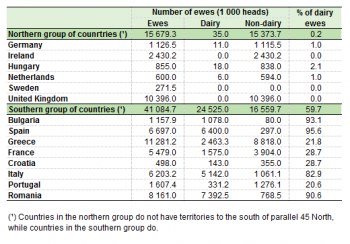 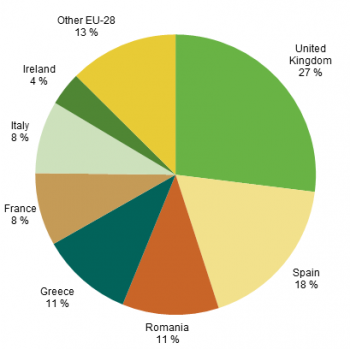 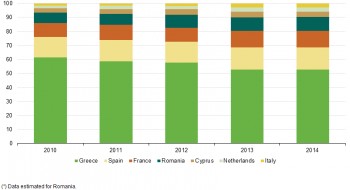 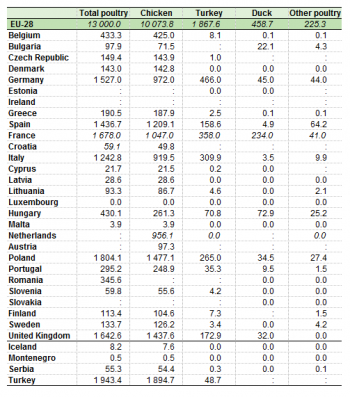 Since the decoupling of subsidies in 2003, following the mid-term review of the Common agricultural policy (CAP), the total numbers of livestock have decreased for the various species.

Between 2005 and 2014, there was a drop in total livestock (Figure 1). This trend continued until 2013 for pigs and sheep. However, the herds of bovine animals increased in 2012, while the herds of goats stopped decreasing in 2013. During 2014 there was a slight increase in all of the livestock categories, which was the highest for pigs (1.4 %) and the smallest for goats (0.1 %).

Greening of agricultural systems was one of the objectives pursued under the latest reform of the CAP. Livestock farmers are therefore required to adapt their farming systems if they wish to preserve their income and offer products geared to market needs and to society’s demand for environmentally friendly farming practices.

The special case of ‘other slaughtering’

So-called other slaughtering is carried out in places other than in slaughterhouses. In the EU, it is a marginal phenomenon, primarily arising from own-consumption and traditional or ritual slaughter (Table 2). It can also reflect weaknesses in the national veterinary information system. It can be locally significant in part due to incomplete implementation of hygiene legislation. The EU has rigorous hygiene rules, and food is tracked at all stages of the production chain, including slaughtering, processing and distribution, in order to guarantee food safety throughout Europe (see data sources and availability).

The general trend is a decrease: other slaughtering fell by 44 % in the EU-28 between 2009 and 2014, but it remains at a significant level in Bulgaria and Romania.

In terms of value, bovine animals represent 8.1 % of total agricultural output and 18.8 % of animal output, without taking animal products (e.g. milk) into account.

Bovine production forecasts are expressed as gross indigenous production (GIP), defined as the number of bovine animals slaughtered plus or minus the net exports of live bovine animals. This indicator is more likely to be produced based on current livestock rather than slaughtering.

Compared with pigmeat production, beef production has a longer production cycle (see Figure 6), its feed efficiency is lower and the value of individual animals is higher. In addition, the diversity of animals produced for slaughter (feeding mode, age, dairy or meat breeds) makes the production systems more complex. All these factors have led to tight margins and low profitability. The purchasing power of consumers is also a key determinant of the level of meat consumption. This is noticeable especially in the beef and veal sector where prices are significantly higher than for pig (or poultry) meat. This explains the consumer preference and for pig- and poultry meat.

Pigmeat represents 9.0 % of the total EU agricultural output. As already highlighted, pigmeat is the major type of meat produced in the EU-28.

From 2006 to 2014, the total number of pigs decreased by 1.0 %. This trend can be explained mainly by lower profitability, due to economic and regulatory conditions, with impacts on the weakest farms. For instance, as a result of requirements laid down on their welfare conditions, Council Directive 2008/120/EC on the protection of pigs contributed to increasing the cost per sow. The larger pig farm size, as measured by the number of sows, comes across as an efficient market response in this context. They represent a higher share of the sector in the EU-15 than in the other EU Member States. It also reflects the disappearance of the smallest and less productive pig-farming activities. Although the total number of pigs has decreased since 2004, pigmeat production has remained stable over the years and even registered peaks in 2008 and 2011 (see Figure 7). This reflects efficiency gains in pig farming despite stronger regulatory constraints. This is more evident in the EU-15 than in the other EU Member States.

Meat from sheep and goats

Based on the 2010 FSS, 7.7 % of farms in the EU had sheep and nearly half of the sheep belonged to flocks of over 500 heads. Goat farms accounted for 4.4 % of farms and 51.5 % of goats belonged to flocks of over 200 heads. These average figures somewhat conceal the contrasts between small herds, either in small rural farms or as a side-production in larger ones, and larger herds, especially in regions with natural or environmental constraints [4].

The 14 EU Member States reporting on sheep population can be distinguished depending on the share of dairy ewes in the ewe flock (see Table 3). The ‘northern’ countries have no or limited dairy production whereas dairy ewe sheep farming is significant in the ‘southern’ countries.

The farming systems for sheep and goats in the southern countries have similar levels of complexity in terms of their organisation as those for bovine animals in the EU generally, with both dairy and fattening flocks co-existing. Individual dairy animals are more profitable than meat animals and therefore they are more likely to be supported by technology than meat animals (feeding, genetic progress, farm equipment, farmer education, etc.). Several types of meat are produced, either from young animals in the dairy herd or from heavier sheep in the meat herd, fattened on grassland or with feedstuff. Milk processing on farms is more frequent, as daily milk volumes are lower than from cows’ milk, i.e. milk collection by a dairy is suitable only where dairy farm density within the territory is sufficient.

Between 2005 and 2014, the sheep flock of the 14 reporting countries went down by 11.4 million animals. The drop reflects the significant fall observed in the main sheepmeat producing countries. Spain lost 31 % of its flock (7.1 million sheep), Portugal 30 %, Ireland 22 %, Germany 21 % and France 18 %. The Netherlands and Croatia, with a smaller share of the total number of sheep, also decreased their flock (– 38 % and – 24 % respectively). The United Kingdom, which is by far the most important sheepmeat producer (28 % of EU-28 production), lost 3 % of its flock. In contrast, the sheep flock grew in three countries: Romania (+ 25 %) and Greece (+ 4 %), where more than 90 % of ewes are dairy ewes, and in Sweden where the apparent increase (+ 23 %) also reflects changes in the survey methodology.

The overall contribution of goat meat to the EU-28 meat production is modest (0.1 %) and is concentrated in seven EU Member States representing 95.6 % of the total EU goat meat production. It can be described as a by-product of dairy production. Goat slaughtering is recorded to ensure a complete overview of the sector.

Sheep and goat farming is possible in areas with limited agronomic potential (rough grazing), but only at low levels of profitability per head. The trend is either one of increasing herd size or of turning to dairy production. It can also take advantage of poor lands and be part of the overall activity of diversified farms. It is therefore important for rural development policy and no specific direct support is designed for the product at EU level. Several EU Member States (e.g. Greece, Spain, Italy, the Netherlands, Poland and Portugal) have introduced specific national support measures for sheep and goats.

Poultry meat production is therefore relatively integrated. Production constraints introduced by legislation (such as environment, hygiene and welfare issues) have increased production costs and limited profitability thresholds. Further commitments under quality schemes have also increased costs, but the higher costs are more than offset by the added value gained. In a competitive market, this has favoured the development of larger poultry farms.

Since 2009, the structure of livestock farms no longer forms part of an EU survey as such. Thus, the data are drawn from the FSS. Although this provides a wider scope (including land use, livestock, labour force, etc.) and a longer reference period, the results are less informative about the animal population than the data previously collected through the Livestock survey. Every tenth year the FSS is carried out as an agricultural census and meanwhile two sample surveys are conducted. The FSS data can be used for describing the structure of animal herds. The legal basis for the FSS is Regulation (EC) No 1166/2008 of the European Parliament and of the Council.

The EU Member States collect information on land use, livestock numbers, rural development, management and farm labour input from individual agricultural holdings. Based on the share of virtual value for standard output, activities of the farm (e.g. cows, other than dairy cows) are used to classify the type of farming. If the share of standard output from a particular activity is more than two thirds of the total farm output, it is classified as ‘specialist activity’ (e.g. specialist cattle — rearing and fattening).

The legal basis of the data collection on slaughtering and meat production is Regulation (EC) No 1165/2008. It establishes a common legal framework for statistics on livestock (bovine, pig, sheep and goat), slaughtering (bovine animals, pigs, sheep, goats and poultry) and production forecasts (bovine, pig, sheep and goat meat). In order to limit administrative burdens, Member States with a limited contribution to EU results are asked to deliver fewer statistics, or to deliver them less often. The threshold for bovine population is, for instance, 1.5 million heads (see Table 5).

The livestock survey provides information about the livestock population at national and regional level. Designed for this purpose, the results on the number of animals are intended to be more reliable than the farm structure survey figures. Furthermore, the nomenclature of livestock is more detailed, especially in order to establish production forecasts. The surveys are conducted in all EU Member States at least once a year (in November/December). The figures on sheep population are due from only 14 EU Member States and the figures on goat population from only five. In this article, the figures presented refer only to these countries. A second survey is conducted in May/June for bovine (12 EU Member States) and pig (12 EU Member States) populations where relevant. The November/December survey results are also provided at regional level.

Gross indigenous production (GIP) is forecasted once a year or, where significant, twice a year. Quarterly (pig) or half-yearly forecast production covers a one- to two-year period depending on the country status and on the animal species concerned.

Regulation (EC) No 1165/2008, which entered into force in 2009, introduced a classification based on the age of the slaughtered animals instead of the weight. This may have an impact on some slaughtering figures and break the relevant time series. In particular, the figures for slaughtered young cattle (under 1-year-old) and heifers (1–2 years) were affected.

The economic accounts for agriculture (EAA) is a satellite account of the European System of Accounts providing complementary information and concepts adapted to the particular nature of the agricultural sector. Although their structure very closely matches that of national accounts, their compilation requires appropriate rules and methods. Agricultural output measures the value of agricultural products (crop and animal products) produced during the accounting period. It includes the value of agricultural services and excludes the intra-unit consumption (consumption by the farms of their own products).

This article draws a portrait of meat production in the EU in 2014, with a particular focus on slaughtering. It also deals with the structure of European farms and the livestock population.

Data on meat production is used to monitor these market sectors. Statistical trends are observed for the management of the various policy instruments of the meat sectors.